Just wanted to throw this out there. I keep on getting this notion, that some things do not belong to their time. On one hand the information is available if you know what to look for. On the other hand we do not run into stuff like this every day. I find it particularly weird, when a technological achievement gets itself a five line Wikipedia page, like it is really insignificant. And when we talk about an electric scooter made in 1915, I would definitely want to get more info on the 1915 electrical battery, for example.

"The Autoped was an early motor scooter manufactured by the Autoped Company of Long Island City, New York from 1915 to 1921.

The driver stood on a platform with 10-inch tires and operated the machine using only the handlebars and steering column, pushing them forward to engage the clutch, using a lever on the handlebar to control the throttle, and pulling the handlebars and column back to disengage the clutch and apply the brake. After riding, the steering column would be folded onto the platform to store the scooter more easily. The engine was an air-cooled, 4-stroke, 155 cc engine over the front wheel. The bike came with a headlamp and tail lamp, a Klaxon horn, and a toolbox. Developed during wartime and gasoline rationing, it was quite efficient, but was not widely distributed. An electric version was also available with a motor on the front wheel.

This is normal, right?

Feeling bamboozled yet? They were classy back then...​
A patent for the Autoped as a "self-propelled vehicle" was applied for in July 1913 and granted in July 1916. An early description of the Autoped described it as having a hollow steering column that acted as the fuel tank. However, the production version had a fuel tank above the front mudguard." - Nothing else in Wiki 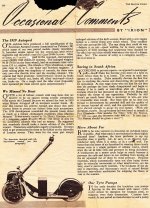 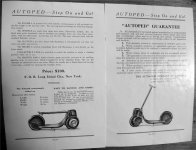 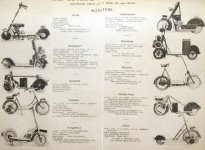 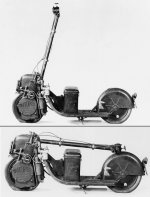 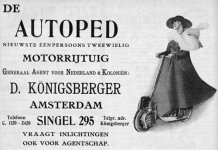 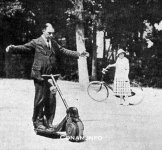 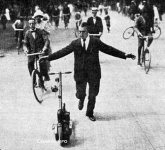 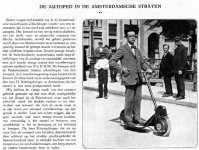 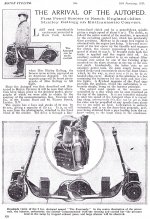 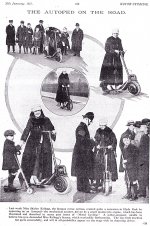 source​
Fun fact: Records show that the first patent for an electric personal transport device, an electric motorcycle by chance, was filed in late 1895 by inventor Ogden Bolten Jr. of Ohio, United States. Ogden’s design is crude by today’s standards, but it was revolutionary at the time of its conception. 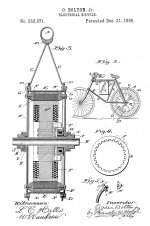 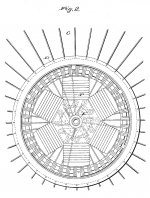 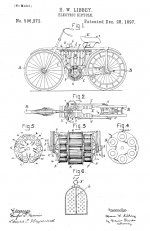 I did not look tremendously hard for the images of the electric scooter. I tried real quick but failed. So if you find one or two, please share. I really would like to see the battery, and may be some documentation for it.

Anyways, it was just a little piece of info pertaining to something developed 100 years ago. Coincidentally this something (electric scooter) had to wait for almost 100 years to be adopted. KD: Quite a few things we re-discover a century after they were initially introduced...
Click to expand...