Legendary city of Norumbega: could it be Washington, DC?

I'm gonna attempt to tackle this Norumbega, a.k.a city of Bega, Nurumberg, Nurumbega, Nurembega, Norobega, Oranbega legend. There are quite a few fascinating occurrences related to this so-called "legendary settlement" located in the northeastern part of North America. Reading the official narrative of Norumbega, it appears that they do not outright dismiss its existence, but rather reduce its "correct" description to nothing but a small settlement. Obviously, the houses with pillars of gold, and inhabitants who carried quarts of pearls on their heads are being officially presented as an example of a 500 year old vivid imagination. To be fair, we do have very very old texts questioning the existence of this Norumbega City.

1611 - Norumbega et Virginia​
Wikipedia Narrative - link​
The Legend of Norumbega​
Apparently, the "legend" of Norumbega, was in part attributed to a certain illiterate British sailor named David Ingram. He made his way from Texas to Maine, and beyond to the St. John's river, where he was picked up by a friendly French ship and carried to France, and so got home to England. The journey across North America took him about eleven months, but one of his comrades, Job Hortop, had no end of adventures, and was more than twenty years in getting back to England. Ingram told such blessed yarns about houses of crystal and silver, and other wonderful things, that many disbelieved his whole story, but he was subjected to a searching examination before Sir Francis Walsingham, and as to the main fact of his journey through the wilderness there seems to be no doubt.

You will find it difficult to find these names in the history books and they are not easy to find on the internet. They are not among the lists of the great explorers, although David Ingram has an entry in the Dictionary of Canadian Biography under the heading ‘Explorer’ (David Quinn, 1966). Nonetheless these three illiterate English sailors made one of the most amazing journeys of all the amazing journeys in the Age of Discovery.
Click to expand... Tales of the Enchanted Islands of the Atlantic

David Ingram's Account​
Given that the original text published in 1583 has no surviving copies, the best version of Ingram’s account we have is called Land Travels of Davyd Ingram. I have my doubts as to why "no copy is known to survive". May be today's scholars should check for one at the Vatican Library Secret Archives. At least they know what the name of the text is.

He saw kings decorated with rubies six inches long; and they were borne on chairs of silver and crystal, adorned with precious stones. He saw pearls as common as pebbles, and the natives were laden down by their ornaments of gold and silver. The city of Bega was three-quarters of a mile long and had many streets wider than those of London. Some houses had massive pillars of crystal and silver.
Click to expand... 1856 - Land Travels of Davyd Ingram
​
Ingram was interviewed (interrogated?) by Peckham and Walsingham in 1582: Richard Hakluyt’s Principal Navigations, Voyages, Traffiques and Discoveries of the English Nation. Latin Language​
Norumbega language sounding like "Latin" added a peculiar twist to this entire story-legend. This fact, or speculation is obviously not verifiable from whatever angle you approach the issue. Etymology​
Official: the word "Norumbega" was originally spelled Oranbega in Giovanni da Verrazzano's 1529 map of America, and the word is believed to derive from one of the Algonquian languages spoken in New England. It may mean "quiet place between the rapids" or "quiet stretch of water".

Now, I'm not an expert in the origin of words, but something in the official narrative was smelling of "we do not really know, but here is a version for you". I googled some, and found this 1884 book "The Discoveries of America to the Year 1525, Volume 1" by Arthur James Weise. I read Mr' Weise's explanation, and was surprised to see all the speculations he indulged in, to get his point across: pages 348, 349, and 350. The Discoveries of America to the Year 1525
​
With one of the original spellings being "Nurumbega", it appeared that we had a two part word with "nurum", and "bega" being the parts. I turned to Google Translate.

Documentary History of the State of Maine​
Additionally, Norumbega was also being referred to as "city of Bega". One way or the other, the only more or less constant part of the word appears to be this "bega".

Tales of the Enchanted Islands of the Atlantic​
With 16th century maps being predominantly in Latin, "nurum" very quickly produced "a daughter". The "bega" part proved to be more challenging, for it was not really producing anything. For sure, this "bega" could have been some sort of a derivative from "berg". I did find "berga" on one of the maps, and naturally my "bega" investigation could be based on the misleading info. Anyways, I figured that "bega" could be a name, kind of like "Nurum Bega". You can imagine my surprise when I found a candidate for this "bega" person, who ended up being an Irish Princess. ​
"The most likely time for this (KD: Saint Bega's existence) would have been after AD 850, when the Vikings were settling Ireland." - Wiki As we can see, she might have fled from Cumbria. The question is - where to?

KD: Anyways, I do not know if my name interpretation has any scientific merit, but this version is mine, and for the time being I'm sticking to it. It does appear that wherever this legendary Irish princess ended up after fleeing Cumbria is not set in stone. With all the "Viking-American" connections present in history, why not America? Would a princess run on her own, or accompanied by some loyal knights? I do not know, and I do not think the official version knows either.

Of additional interest could be certain historic artifacts associated with Saint Bega, who, at least for a period of several years, was associated with the village of Saint Bee in Cumbria. Here are some of those artifacts. 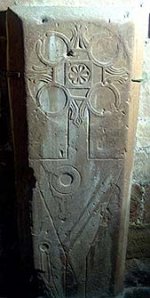 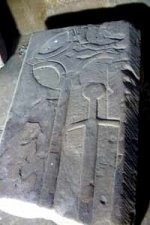 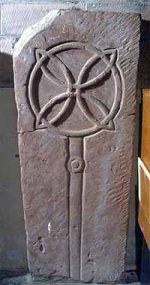 ​
Source for the above mages: Old European culture: St Bega


Maps​
This is probably my favorite part of the entire research, for all of the above can very easily produce some major headache. I prefer simple sequence, i.e., "This guy said it was here, and these mapmakers placed it here on their maps. Now let's look at the maps". Unfortunately with this approach Norumbega's story would be too dull.

So, what do we have for Norumbega on the maps? Quite some I have to say, but first let's see where our current scientist place Norumbega area on the today's map. Don't get me wrong, they do not entertain an idea of the City of Bega having been located there. It is, more or less, the area where this "never found" city was predominantly looked at for. Yup, they deliberately looked for it in the area where it was never located to start with. Vicinity of the Penobscot Bay in Main, this is where the search for Norumbega was supposedly conducted at. I put a little red star next to the general area of the search. Ancient Norombega, or ... ​
The end result we know - the City of Bega was never found. Meanwhile a whole bunch of places in the State of Maine, as well as Massachusetts, started to display the word "Norumbega" as a part of their name. Apparently Boston could be a possible candidate for the Norumbega City location. At least Andy Woodruff presents an interesting case in his article
I do not know about you, but with all the contradicting information (this does not pertain to the Woodruff's article above) pertaining to a multiple other places, I put little trust in what was, or was not found. Same goes for whether it was destroyed for one, or the other reason. We have plenty of evidence of cities being destroyed by the so-called "urban fires".

Older Maps​
As we came to find out, outlines of our continents have changed since those older maps were produced. The official history insists on "creative imagination", and "incompetency" of the cartographers of the past. Sure there had to be some of that. The question is to what extent? In my opinion, these geographic changes took place 400-500 years ago, and at the time, the maps were more, or less reflecting the genuine state of geo affairs. Of course, we do need to remember, that 15th, 16th, 17th, 18th and 19th centuries are full of historical forgeries and such.
After all who within the constraints of the dogmatic narrative would advertise the existence of a Europen looking city on a newly discovered continent of North America? So there you have it. Long story short, I think this City of Bega, or Norumbega could be what we call the City of Philadelphia, or Baltimore today. Though I'm leaning towards Washington D.C. Here is my non-scientific approach to this hypothesis. The below compilation does not match as nicely as the above one. Things are not as much to scale. Whatever the reasons are, remains to be determined. There were a lot of strange outline changes in our recent past, well, at least it appears that way. One way or the other, this Norumbega appears to be very far from the State of Maine and its Penobscot Bay. Yet, this is where the search was supposedly conducted. To be fair, I have to mention, that Nurumbega exists on the maps as a City, and as a Region. I could not help myself with the below year i584 Michael Lok map. Had to add it. 1570​
Part of Abraham Ortelius' atlas from 1570, showing "Norvmbega" among other somewhat mythical names. Any guesses why the names are considered to by "mythical"?

In reality, there are quite a few maps displaying Norumbega.