I have this growing notion that our archaeology is meant to conceal our true history versus uncovering the mysteries of the past. Here is another prime example, which shows how lame the official position is. It is rather comical that the Associated Press which earned 52 Pulitzer Prizes, demonstrated a total lack of ability to analyze the information. After this, what makes them different from any other "yellow" press out there? Wikipedia says, "Yellow journalism and the yellow press are American terms for journalism and associated newspapers that present little or no legitimate well-researched news while instead using eye-catching headlines for increased sales."

After reading various articles about the re-buried walls of the city of Antwerp, I decided to look for something else, and happened to run into this article distributed by the Associated Press back in 2015, "400-year-old church re-emerges from beneath Mexican reservoir". Well, let's see how well researched the story about the submerged Temple of Santiago is. The first thing I ran into was the statement below. 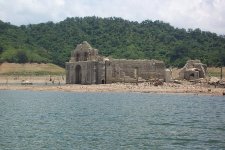 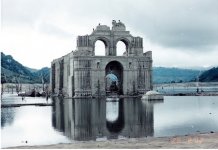 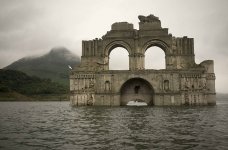 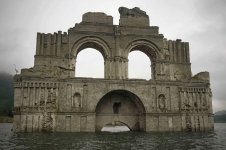 ​
I looked it up. The church was allegedly built around 1560s. I was pretty tempted to swing by one of the local monasteries and ask the monks if they knew how to build a church in the middle of nowhere. Anyways, let's see what the official sources say about this structure first. 1484-1566
​
In 1564, the Dominican friar and social reformer Bartolomé de las Casas and his fellow monks founded a monastery in Tecpatán, in what is now the Mexican State of Chiapas. Based on the architectural similarities, the Temple of Santiago is believed to have been constructed by the same builders. At the time, the church served a much smaller congregation than it could handle, and was designed in preparation for large population growth.

In 1966, the Nezahualcoyotl Reservoir was completed from the construction of the Malpaso Dam, and the Temple of Santiago was completely submerged. It has reappeared periodically, at times when the reservoir water levels have dropped, the first recorded such time being in 2002. That time, the water levels were so low that the church floor was dry, and local people visited it to hold parties. In 2015, the Temple reappeared again, after water levels dropped more than 80 feet during a drought. ​
The official version stated that based on the architectural similarities, the Temple of Santiago is believed to have been constructed by the same builders who constructed a monastery in Tecpatán. So, I naturally started looking for this Monastery of Tecpatan for some additional info. Unfortunately I was unable to find any official English language source for this monastery. Yet, I ran into this wonderful blog full of pictures of this Tecpatan monastery - Tecpatan Church restored with the feeling of antiquity. There was also an additional article titled, "Chiapas: Tecpatán" 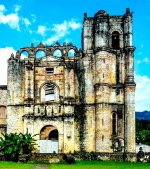 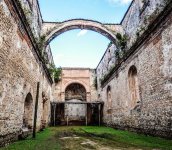 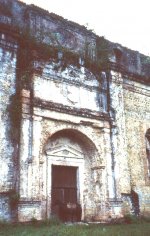 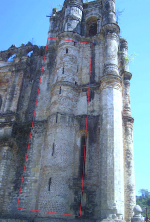 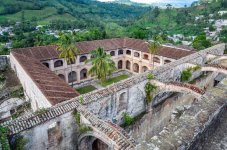 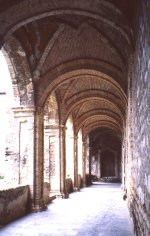 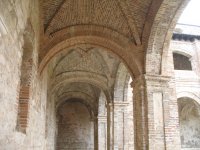 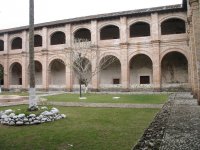 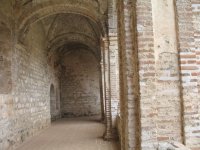 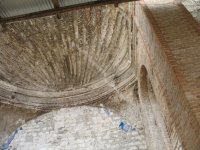 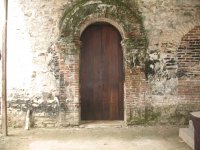 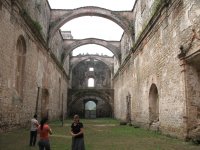 ​
Check this image out where we have a horse standing next to the door. What size people were those doors made for? Show me the BRICK factories​
In 1492 Mr. Columbus allegedly discovers America. By 1521 Hernan Cortes allegedly conquers Mexico. In 1560s some group of master builder monks constructs these two structures in the middle of newly discovered Mexican nowhere: the Temple of Santiago and the Tecpatan Monastery.

​
KD Summary: We are led to believe that in 1560s some group of rogue master builder monks produced two virtually indestructible masterpiece quality buildings, one of which is still surviving after spending over 50 years under water. They used brick as their construction material of choice. They needed 20 foot tall and 8 foot wide doors. They built those buildings in the area which had no population. (in 2010 the town of Tecpatan had had a population of 4,530). The location they picked was situated some 70 miles away from the nearest possible brick drop off point, and which had no known roads available for transporting the construction materials. ​
This brings me back to the photograph which originally distracted my attention to detail. I will speculate here, but the contrast between the brick masonry and the below makeshift patching is way too obvious. 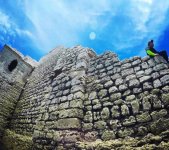 ​
In my non-expert opinion, these buildings were already there, when some Europeans happened to stumble upon them. The buildings were abandoned, and required some minor repairs, an example of which you can see in the above image.

Questions for our official archaeologists and scientists: