In accordance with the 1856 Treaty of Paris, which formalized Russia's defeat in the Crimean War, Moscow was forbidden to deploy its fleet in the Black Sea. This did not fully suit the imperial government and by 1871 (the moment the agreement was denounced and Russia was given back its right to keep ships on the Black Sea) a program designed to create coastal defenses in Crimea, which would not be affected by the pact, was already in full swing.

"Thus, the authorities decided to build 'ships not from wood.' The draught of such a floating object had to be 3.3 meters and the guns had to have a caliber of at least 280 mm. One of the most important criteria of these ships was the armor - more than on the foreign vessels," explained former editor-in-chief of the Voenno-promyshlenny kurier newspaper Mikhail Khodaryonok.

The only vessels that met these criteria were the round battleships designed by Admiral Andrei Popov, hence the nickname Popovkas.

The existence of these two (yes, there were only two built... allegedly) round Russian armored ships in 1873 does not appear to be a widely known fact. As we came to find out, information is not really hidden, for it is publicly available for research. Yet, certain things are simply not being disseminated. Personally, I found these round ships significant enough to share on this blog. These two ships were:
To the above two monitors we will have to add one additional ship built between 1879 and 1880. It was called Levadia, and was an imperial yacht of the House of Romanov. The common denominator here is the below mentioned Admiral Popov, and its "Unconventional design". 1821-1898
​
This gentleman above was the one who designed the round ships. Before we briefly go over his bio, I wanted to remind, that he was one of the two Russian Imperial Navy commanders who "assisted" the United States during the Civil War. He commanded the Russia's Pacific Squadron which arrived in San Francisco on October 12, 1863.
Isn't it interesting how seemingly unrelated things could have a hidden meaning? Jumping ahead of myself, but considering the time frame, could it be that the design of these ships was acquired by the Admiral Popov during his San Francisco stay? Interesting that this idea of building "floating fortresses" in support of the Russian Black Sea defense forces is also being attributed to 1863.

So, who was this Admiral Popov. Here is how Wikipedia presents the narrative compliant version.

Engineering Education​
If there was anything suggesting that Admiral Popov received any formal engineering education, I totally missed it. But it appears to be the norm (when we talk about the 19th century) when people with no related education design and build objects of high complexity.

Small Inconsistencies​
These small inconsistencies I'm talking about, pertain to the review of the capabilities of the ships. I will re-quote a portion of the above "Unconventional Designs" paragraph.
To add to the above dismal review, we have the following verdict. In his book, The World's Worst Warships, naval historian Antony Preston characterized the popovkas like this:
I do not know who exactly to attribute the first of the above two reviews to. The design of these ships was very controversial while they were being built in the 1870s, with many articles being published in the newspapers of the day by supporters and detractors, and later picked up by historians. One such account, published in 1875, claimed that Novgorod made an uncontrollable turn while on the Dniepr. The second one belongs to Antony Preston, who was born in 1936. By then all of the ships covered in this article were scrapped.

But here we have a totally contradicting (the above two) review published by Sir Edward Reed, then Director of Naval Construction of the Royal Navy.
The above contradictions were explained like this:
Then we have this opinion of naval historian Stephen McLaughlin. The opinion is claimed by Wikipedia to be a reasonable assessment of these ships:

The "Popovka" Ships​
The first ship, called Novgorod, was launched in the presence of the emperor on May 21, 1873. The second, which was named in honor of its creator, was launched on September 25, 1875. Unlike the "Novgorod," the new Popovka received a thicker, double layer of armor, a more powerful engine, and a larger superstructure over the deck. But the project was unsuccessful.

Monitor Novgorod​
Novgorod was a monitor built for the Imperial Russian Navy in the 1870s. She was one of the most unusual warships ever constructed, and still survives in popular naval myth as one of the worst warships ever built. A more balanced assessment shows that she was relatively effective in her designed role as a coast-defence ship. The hull was circular to reduce draught while allowing the ship to carry much more armour and a heavier armament than other ships of the same size. Novgorod played a minor role in the Russo-Turkish War of 1877–78 and was reclassified as a coast-defence ironclad in 1892. Monitor Kiev aka Admiral Popov​
Vice-admiral Popov was a monitor built for the Imperial Russian Navy in the 1870s. It was one of the most unusual warships ever constructed, and still survives in popular naval myth as one of the worst warships ever built. The hull was circular to reduce draught while allowing the ship to carry much more armour and a heavier armament than other ships of the same size. Vice-admiral Popov played a minor role in the Russo-Turkish War of 1877–78 and was reclassified as a coast-defence ironclad in 1892.

Imperial Yacht Livadia​
The above two ships were so unsuccessful that out of their "unsuccess" was born an Imperial Yacht called Levadia. Let us see what definition Wikipedia assigns to Imperial Yachts.

​
The Livadia was an imperial yacht of the House of Romanov built in 1879–1880 to replace a yacht of the same name that had sunk off the coast of Crimea in 1878. The new Livadia, intended for service on the Black Sea, was a radically novel ship conceived by Vice Admiral Andrey Popov, designed by naval architect Erast Gulyaev and built by John Elder & Co. of Govan on the Clyde. The Livadia continued Popov's line of circular ships although this time Popov sacrificed geometrical perfection for seagoing capabilities. She had a beam of 153 ft (47 m) against overall length of only 259 ft (79 m). An extreme example of tumblehome architecture, she sported a conventionally shaped superstructure mounted on a wide, flat-bottomed, turbot-shaped submerged hull or pontoon. ​
Construction of the Livadia, "a gigantic life-size experiment" and a prototype for next-generation battleships, was supervised by William Pearce. Bruno Tideman and Edward James Reed acted as consultants, William Leiper and William De Morgan designed luxurious interiors. The Livadia turned out a surprisingly maneuverable and stable ship with a respectable maximum speed of 15.7 knots and her efficiency was comparable to conventional ships. Her performance at sea trials surprised most naval architects and was attributed to the favorable placement of the propellers. 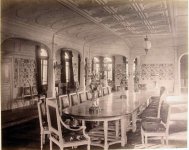 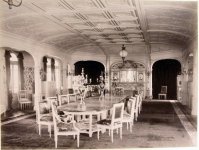 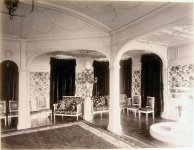 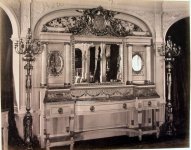 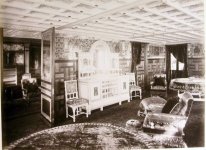 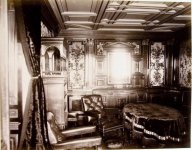 ​
The maiden voyage of the Livadia revealed that her wide flat bottom was highly prone to damage by wave slamming. She spent her brief career as a yacht in the docks and was used for her intended purpose only once, carrying Grand Dukes Constantine and Mikhail across the Black Sea. Alexander III had no interest in resurrecting an inherently flawed ship, and in August 1881 Livadia was moored in Nikolaev and then hulked and stripped of her former luxuries. Her engines were removed and reused on the Russian cruisers. The rusty hulk saw some use during World War I and was finally decommissioned in 1926.

So if the Yacht sucked that much (according to 2019 Wikipedia), then why in 1880 the following was published? 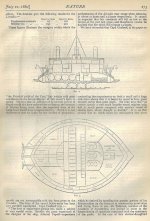 ​
And then we have opinions like this Google translated one:

KD: To be honest, I do not know what to make out of the existence of these ships. Kinda getting that feeling when you are being told to move on, because there is nothing interesting to see here. To a certain degree, it looks like we are being forcefully convinced that these ships were terrible. At the same time several instances mentioned above make me question the narrative.

We do not appear to have any high resolution images of these ships, to take a good enough of a look. I was unable to find any serious construction documentation. On one hand it is understandable when time taken into consideration. On the other hand this is the same old story - nothing survived.

After reading the below wikipedia articles (which contain way more info), it becomes apparent that these ships were something more important comparing to what we are lead to believe. The description of their construction alone demonstrates their importance.

Judging by the general appearance of these ships sitting in the water, it's almost like they were redesigned for other purposes. May be, I don't know.

Circular Vessels of War​
And as it often happens in the process of looking into something, additional things start popping up. Sometimes in great quantities. Round, or circular ships of this type were not as uncommon as it seems. But... it is not being advertised, and our school teachers prefer other "more important" issues. Who cares that the First Emperor Napoleon used to design ships? 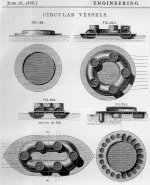 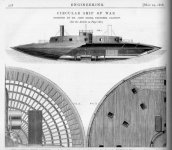 KD: Anyways, if you have any thoughts on the matter, please feel free to share.
Click to expand...