I am not quite sure what to make of this interesting piece of information, but apparently Russians managed to launch some rockets from a submerged submarine as far back as 1834. Looks like they hit their targets as well. No clue why somebody would conceive such an idea in 1834. Granted, the sub was not the most complicated one, but launching rockets from a submerged sub in 1834 appears to be a little overboard... considering that we used muzzle-loading cannons as late as 1870s. 1786 - 1854
​
Here goes the story, "In Russia, after a number of unrealized projects of underwater vessels, Adjutant-General Karl Shilder offered a new one to the Government. In 1834 the underwater apparatus was made out of boiler iron. The crew of 8 men propelled the sub by swinging the paddles, to manoeuvre they used a vertical rudder. In 1840 the vessel has been finished with a water-jet motor. The sea trials the boat passed well – she reached the maximum depth of 12 metres and had hit all the targets. During one if the further submergences, one of the paddles broke and because of this misfortune further developments were stopped by the decision of the War Ministry. - Source

Google translated missile launch info, "The first successful launch of rockets from under the water was carried out in Russia on August 29, 1834 on the Neva, 40 versts above St. Petersburg. In the presence of Nicholas I from the experimental submarine of the design of K. Shilder, 4-inch incendiary rockets were launched, destroying several stationary ships anchored for training purposes. The missile launch system was developed by the sub-lieutenant of the St. Petersburg missile institute P. P. Kovalevsky, who also controlled the launch of the missiles during tests." - Source in Russian 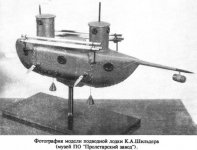 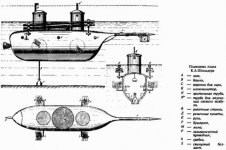 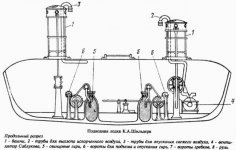 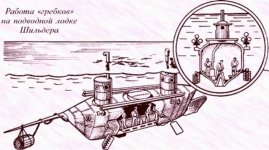 ​
There is no English Wiki page for his Karl Shilder guy, but here is translated one.

In general there are a few web sources on this topic out there, but none I really liked. They all have this weird language which appears to be an electronic translation from Russian. If you stumble into a good source, please post a link. I'm interested to read a bit more on this, for things like "one of the paddles broke and because of this misfortune further developments were stopped" ... appear to be a weird reason to stop such a project.