Little by little, things reveal themselves, though without any specific explanation of what their meaning could be. Here we have a seventeen hour clock which apparently was installed on the Kremlin Spasskaya Tower as recently as 17th century. Obviously it is not being advertised anywhere; you can only run into it by accident. Some of the information is going to be google translated.

In 1628 the master Golovei built the second clock (in exchange for the burned) for the Spassky Tower. The Kremlin watch had a huge revolving dial weighing over 400 kg, divided into 17 parts. The dial was knocked down from the boards and painted with blue paint, light tin stars were fixed on its field. In the upper part of the dial were drawn the Moon and the Sun, the beam of which served as a fixed clock hand. The hourly divisions were denoted by the letters of the Slavic alphabet. The beating of the clock began when the first ray of the sun fell on the Spassky Tower, with the onset of darkness, the clock was translated to the night time. Twice a day, when the sun crossed the horizon, the watchmaker climbed the tower and manually turned the dial to the starting point.
Click to expand... 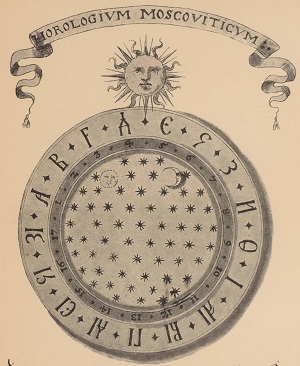 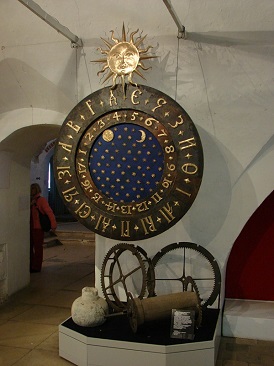 etching - museum reconstruction
​
In this case, the kudos goes to a certain German baron Augustin von Meyerberg. In 1661- 62, Meyerberg was in Russia as a member of an embassy from the Austrian emperor Leopold I. The purpose of the embassy was to act as mediator between Russia and Poland, which were fighting over the Ukraine. Meyerberg’s mission was unsuccessful. The result of his stay in Russia was the abundantly illustrated book Journey to Muscovy, which contains valuable, even if at times biased, information on the political history, government, and way of life in 17th-century Russia.

The Mayerberg Album is a collection of drawings and descriptions of the 17th-century Tsardom of Russia. Mayerberg travelled in Muscovy for almost a year, arriving on 25 May (15 May O.S.) and departing on 5 May 1662 (26 April O.S.). He wrote two Latin accounts of the embassy. Mayerberg also supervised the production of numerous drawings, collected in the so-called Mayerberg Album. The drawings primarily by one Johann Rudolf Storn, although Mayerberg also was accompanied by a painter called Puman. The album also includes often extensive annotations of the pictures in German. The original album was kept in the Royal Library in Dresden.


The Clock​
I am not going to pretend that I understand any of it. Especially when visually we have two different clocks on the same tower. 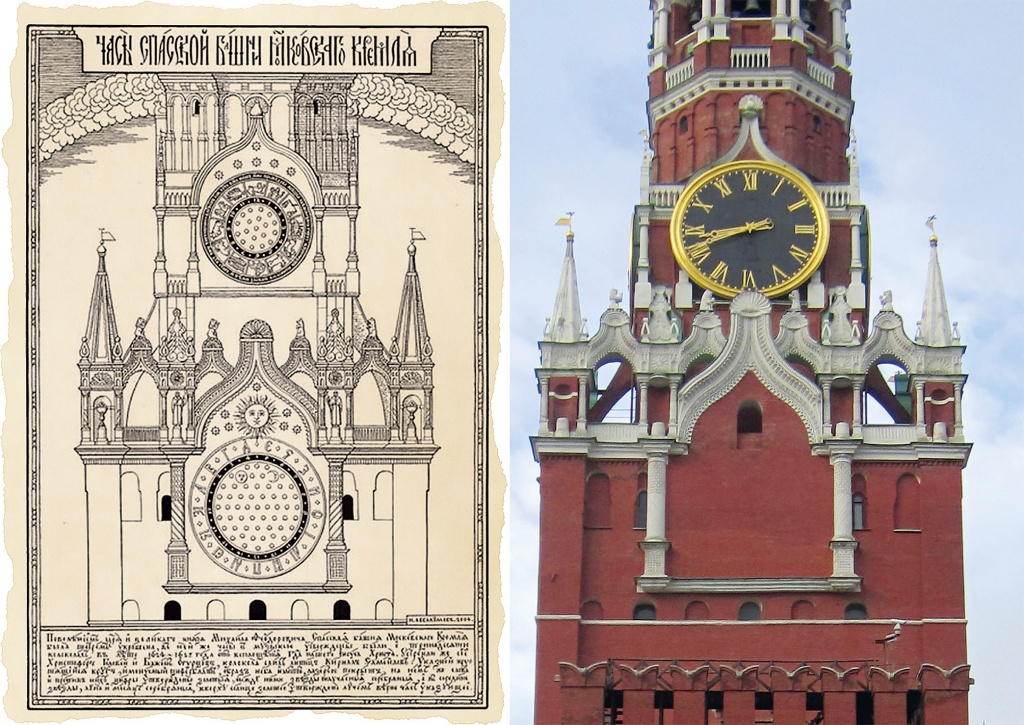 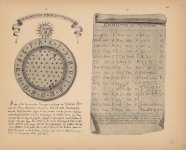 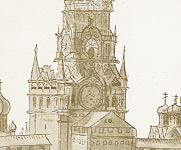 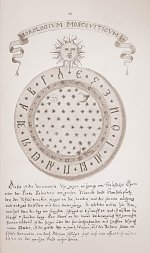 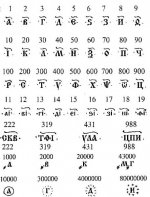 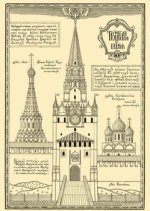 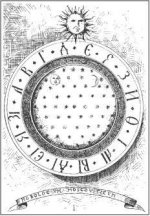 KD: Just like I said, I have no idea what this clock is, how it works, or why it has 17 hours on its dial. Simply ran into this info, and wanted to share it. If somebody understands the principles of this 17th century clock, please share.

One thing I do understand; it could not be the only clock out there. When a clock gets placed on a tower, it is there for everyone to see. This in turn means that people, to include travelers, understood how to read this clock, which means it had to be fairly common.

From here, the most natural question to ask - where are the other instances of this clock on other various etchings, paintings, etc? Did they get removed to conceal something specific? 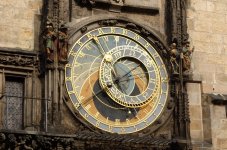 ​
The article says, "Today's clock is thought to be the only one on earth to keep sidereal time in addition to our regular time - that's the difference between a sidereal and lunar month." Umm...doesn't make much sense to me but the word "sidereal" may help figure out the 17 hour thing.

Uranus is calculated to have a 17 hour day and night cycle at the equator around it's equinoxes, but I'm not sure how much that has to do with reality, let alone the clock in question.

AmusingMuse said:
Umm...doesn't make much sense to me but the word "sidereal" may help figure out the 17 hour thing.
Click to expand...

So the difference between the two would be larger than 17 hours, 53 and change. None of these cycles seem like they're evenly divisible by 17 hours either.

Of course, we're talking about the current definition of "hour", so who really knows how long the interval was on this clock. Maybe comparing 17 hours to the current 24 hour day would reveal something numerically interesting.

KD - thanks for the add! A bit more on the 17-hour clock. Similar to some of KD’s info, and some additional and conflicting info -

A second clock was installed during the reign of Mikhail Fyodorovich, the first tsar from the Romanov dynasty (1596-1645). For its construction, they invited Scottish clockmaker Christopher Galloway. He created an absolutely amazing device in which it was not the hands but the dial that moved. The clock face was painted in the color of the sky, with tin stars and an image of the sun attached it to. A ray of that sun served as a clock hand, and the bells rang every hour. Time then was divided in nighttime and daytime hours, measuring the time between dawn and sunset. At dawn, the clock showed one o'clock daytime and at sunset one o'clock nighttime. In the summer, a day could last 17 hours, so the dial was divided into 17 sections. The clock burned down in a fire in 1701.
In the 18th century, the clock face weighed more than 880 lbs. It was made of wooden boards hammered together and painted sky blue. It was divided into 17 parts, and the hours were designated by capital letters in the Slavic alphabet.
The circle was decorated with images of golden and silver stars, the sun and the moon. It did not have traditional clock hands, but rather the sun in the center had two very long rays that acted as hands. The hands themselves did not turn — the sun itself rotated throughout the day.
The clock started to strike when the first light shone on the Spasskaya Tower, and when it began to get dark, the clocks switched to a night track. Every 16 days, the proportion of day and night hours changed and the clock needed to be reset.

Not sure if this helps
also siderial, 1630s, "star-like;" 1640s, "of or pertaining to the stars," earlier sideral (1590s), from French sidereal (16c.), from Latin sidereus "starry, astral, of the constellations," from sidus (genitive sideris) "star, group of stars, constellation," which is of uncertain origin, perhaps from PIE root *sweid- "to shine" (source also of Lithuanian svidus "shining, bright").

preVenger said:
At dawn, the clock showed one o'clock daytime and at sunset one o'clock nighttime. In the summer, a day could last 17 hours, so the dial was divided into 17 sections.
Click to expand...

Thank you for this. This explanation makes sense and jives with a couple other sources I’ve found about older timekeeping practices. It does seem like a logical progression from sundials.

I want to try and remember to come back to this subject later, as I think there’s a lot more to be unearthed here. The history of early clocks seems messy, here’s a a good PDF outlining the lack of verifiable details surrounding it all (also gets into the IIII versus IV Roman numeral clock debate which I didn’t realize was a thing until a brief mention in a recent Jon Levi video). The PDF mentions similar practices of separate measurements for daytime and nighttime but largely focuses on Henry de Vick, who built a famous early mechanical clock in the 14th century in Paris at the request of the King. Precise details seem to be lacking/conflicting, as partially evidenced by de Vick not even being worthy of a Wikipedia article.

What wiki does have in their timeline of time measuring devices fits the pattern that we see all through our alleged history, with a large gap of nothing between the 300 BC and 1100 AD. Also credits the first mechanical clock being 1335 in Milan, but other sources claim they existed in the 1200s. Doesn’t really seem like anyone knows or even particularly cares about the history of this invention that’s fundamental to our current civilization. That’s a little strange to me, and at odds with those who think we then somehow know biographical details of people who allegedly died over a thousand years earlier. But I think that probably could go without saying at this point.
You must log in or register to reply here.
Similar articles