Sometimes, it's so obvious that certain inventions are technologically out of sync with the narrative, that the gap between two realities appears to be utterly ridiculous. In this case we have several revolutionary inventions attributed to the same inventor. What else is new in the world of the Stolen History?


Ictíneo II: Intro​
Ictíneo II was a pioneering submarine launched in 1864 by the Spanish engineer Narcís Monturiol. It made her maiden voyage under human power on 20 May 1865, submerging to 27.5 metres (90 ft). Here is what was so special about her. She was:
I am not sure whether we have an actual photograph of this sub, but we sure do have a replica.

The reason I am not 100% positive we do not have a photograph of the real thing is the image below. The "drawing" looks suspicious.
Sources for the below, or similar looking "photograph-like" images: 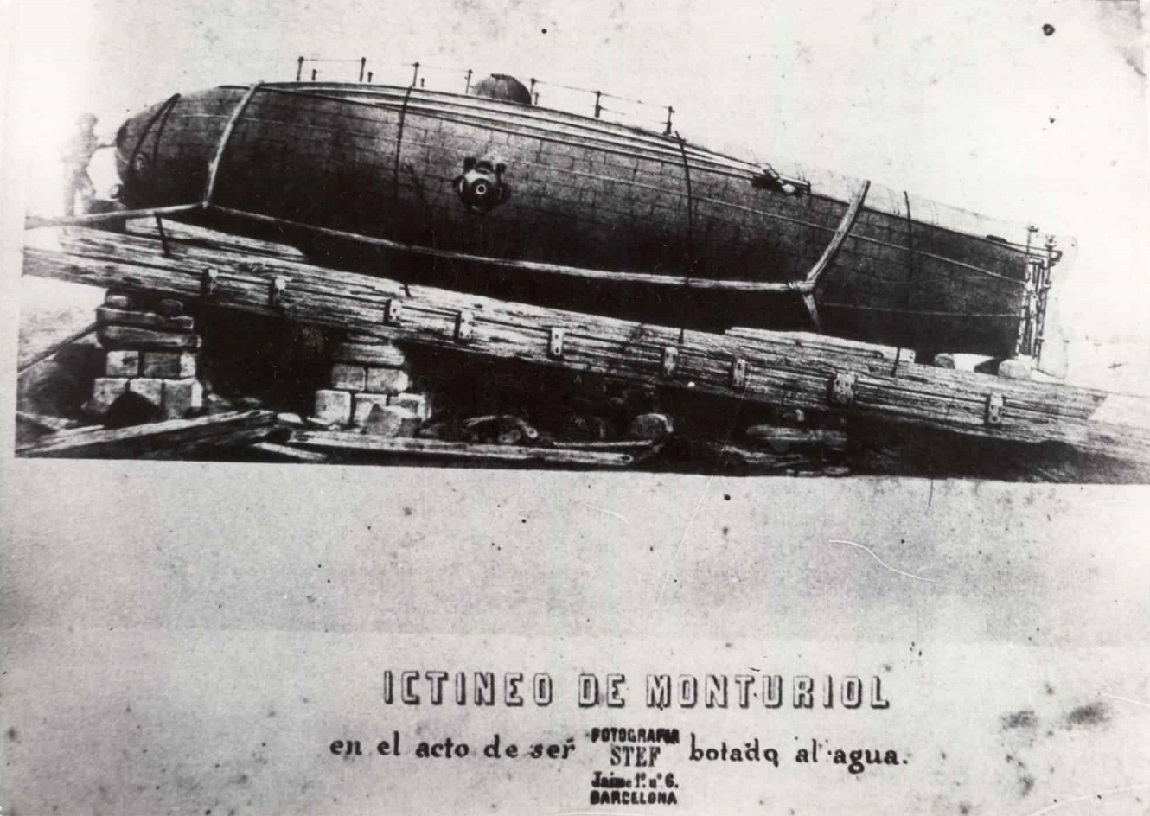 Narcís Monturiol​
Did our "inventor" receive any education that we could associate with engineering? May be he did, but here is what the PTB has to say. Please do not skip, for I know you will enjoy the non-sense. 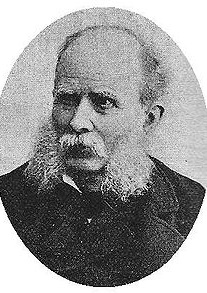 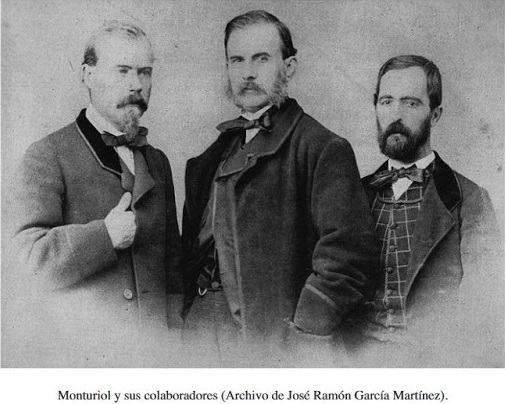 ​
Between 1859 and 1867 Monturiol produced two submarines, and that was it. Caring about them poor coral harvesters only went so far.

In 1868 Monturiol returned to political life. A member of the Partido Federal, he was a deputy in the Constituent Assembly of the First Spanish Republic (1873), and shortly afterwards became the director of the National Stamp Factory in Madrid for a few months, where:
Monturiol's other inventions included:
Not bad for a lawyer and a "utopian thinker". Monturiol died in 1885.

KD: Well, only losers need education, right? Winners just will themselves to inventions of this magnitude. Wait until you read about the inventions Monturiol came up with for his submarine #II.


Ictíneo II: Continued​
The Ictíneo II was originally intended as an improved version of the handpowered Ictíneo I. The Spanish Navy pledged support to Monturiol but did not actually supply it, so he had to raise funds himself, writing a letter to the nation to encourage a popular subscription which raised 300,000 pesetas from citizens of Spain and was used to form the company La Navegación Submarina to develop the Ictíneo II. 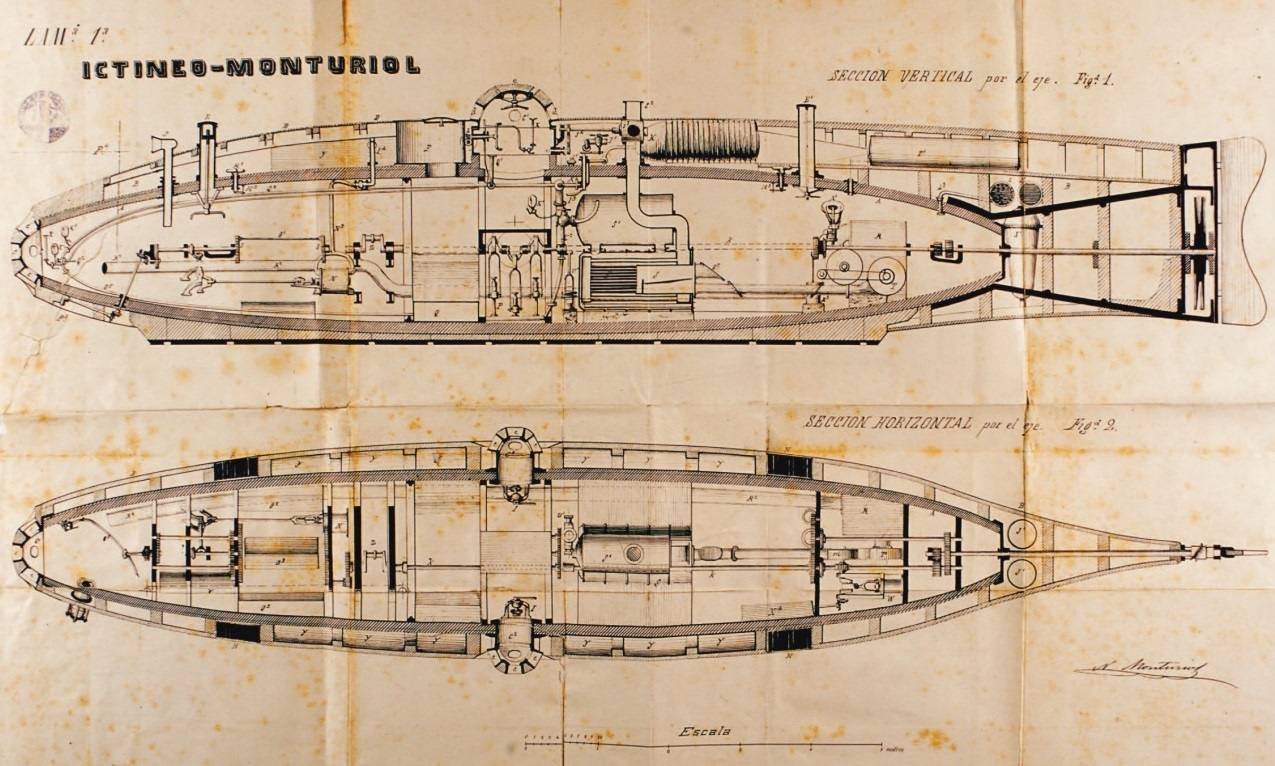 Source​
The Ictíneo II made her maiden voyage under human power on 20 May 1865, submerging to 27.5 metres (90 ft).
Dissatisfied with the limitations placed on him by human propulsion, Monturiol realized that the only option was steam power, but contemporary steam engines required a fire which was not an option for a submarine.
The most important innovation in the Ictíneo II was its air independent propulsion for underwater navigation.
Monturiol intended to develop the submarine for its commercial use in the exploitation of coral reefs.
Monturiol envisaged a new vessel, custom built to house his new engine, which would be entirely built of metal with the engine housed in its own separate compartment.
On 22 October 1867 the Ictíneo II made its first surface journey under steam power, averaging 3.5 knots (4.0 mph) with a top speed of 4.5 knots (5.2 mph).
On 23 December, La Navegación Submarina went bankrupt, having completely exhausted its funds. 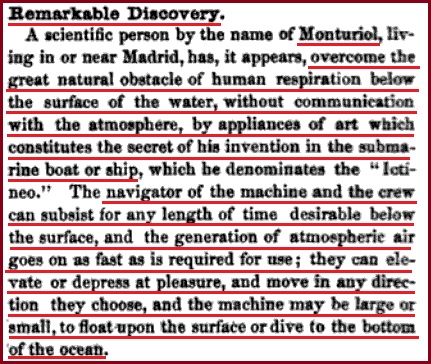 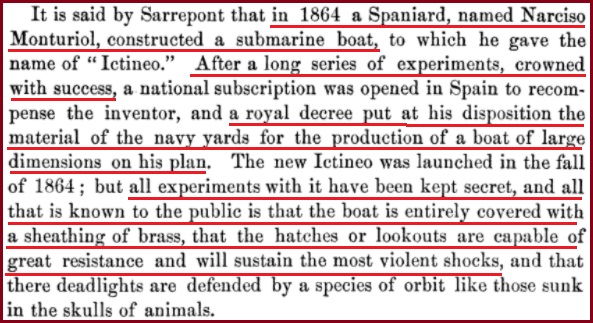 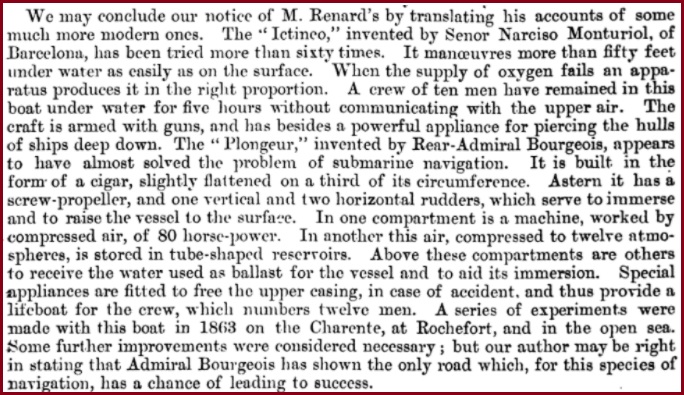 20,000 Leagues Under the Sea​
The novel was originally serialized from March 1869 through June 1870 in Pierre-Jules Hetzel's fortnightly periodical, the Magasin d'éducation et de récréation. A deluxe octavo edition was published by Hetzel in November 1871. The book was widely acclaimed on its release and remains so; it is regarded as one of the premiere adventure novels and one of Verne's greatest works. 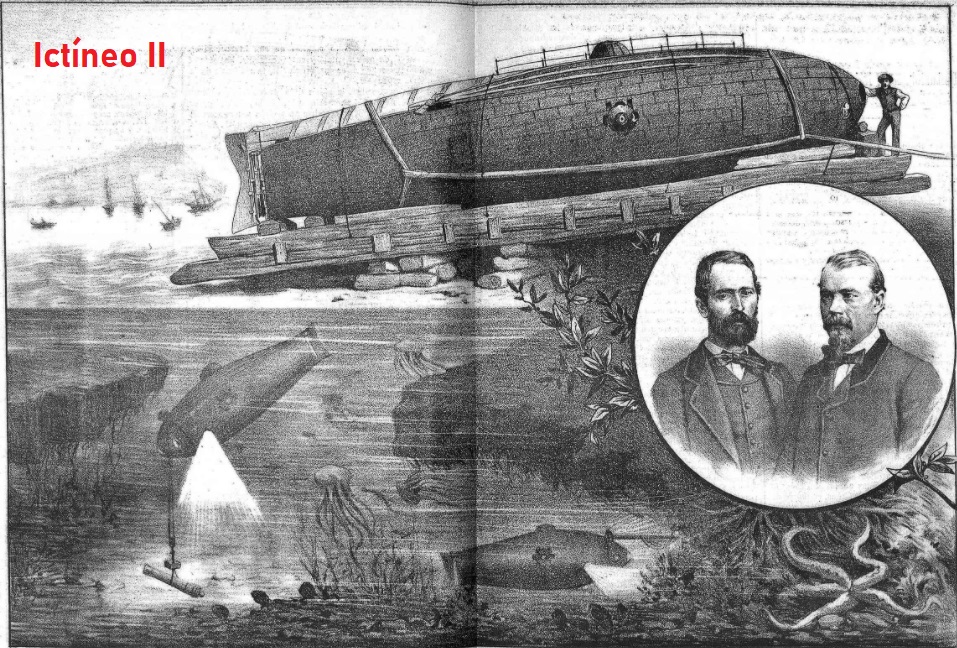 Ictíneo III
- What happened to this Nautilus here? - 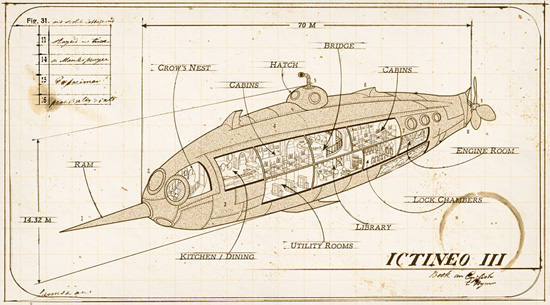 KD: The PTB is unbeatable. If they can publish stuff like this, and no questions are being asked, they are literally invinsible. I call BS on this narrative, but what good does it do?
What do you think we have here?
Click to expand...

It is really impressive how these SOBs have lied to us in everything ... Greetings

Fernandorubio said:
It is really impressive how these SOBs have lied to us in everything ... Greetings
Click to expand...

Greetings to you too @Fernandorubio. Yup, when I was reading about this sub, my thoughts were very similar to yours.

This here is one of my favorite parts, though (to be fair) the “history” of this submarine is full of gems.
The above statement is ridiculous, no matter which way we look at it. What I would like to know is this.
Simon says: Underwater firearms were first developed in the 1960s during the Cold War as a way to arm frogmen.

The concept of putting an underwater firing gun on this submarine has to be pure fantasy. The basic physics of the resistance of water to an object moving through it, which slows an object relying purely on momentum, like a bullet, very quickly, is why torpedoes, which are powered all the way to the target, are used instead. Besides that guns have what is called recoil. The force that is put into the projectile is opposed by the force put into the mount or support for the gun. The main gun on the old M1 Abrams I operated in the mid-1980's was the old rifled 105mm and had a recoil of roughly 13 inches inside the turret. That dampens the force applied to the vehicle and gun mount but the force is still there. Can you imagine putting those recoil forces into a submarine with a wooden hull?! Remember how those old cannons would roll back when they were fired? Even if you could get a canon to fire underwater, it seems like a sure way to destroy your own sub.

Having read everything you have above and all the links, I question how much of the operation of the sub was actually accomplished and how much was just intended. One reason is what is written in the book by Matthew Stewart (your source #3), which is pretty poorly translated by Google, in which everything he says is in the future tense (this will be done and that will happen). The only thing he writes in the past tense is at the bottom where he refers to a water leak that occurred and that they would have to replace all the ferro (iron) components with bronze. Seems like, given all the years of sailing ships, it would have been known that iron components would corrode or oxidize quickly.

At any rate, the diagram doesn't match the photograph of the Ictineo II; in addition to the cupola sticking up from the top of the hull, the diagram shows a periscope at the front, then a vent pipe with a lid on the inside, then aft of the cupola an exhaust pipe and another vent pipe, all of which should be visible sticking out but are not in either the old photo or the "restoration". Similarly, the operation of the rudder is described as using an "endless screw gear" but there is no linkage shown going to the rudder in the diagram, though there is a small rod connecting to the rudder at the top in the old photo. There is absolutely no provisions for the crew visible in the diagram such as seats or places to get away from the machinery, except for the platform where one can stand and look out of the cupola. Further I don't see anything that could be considered ballast tanks, which would have been equally distributed on the hull for balance, except possibly the areas in the top down view labelled with a "T", but once again there is no plumbing to those areas.

I think the statement that the inventor was into "feminism, pacifism and utopian communism" says it all about his character and his associates. I think he was probably just a front man for a team of engineers and ended up with the credit. The idea to use a chemical mixture for propulsion that would also produce oxygen is novel, but it means he had no access to batteries and electric motors.

The texts you have linked labelled "older texts" and "read this" have to be hearsay or even plain BS. "The crew can subsist for any length of time desired below the surface" and "the machine may be large or small" (which is it) sounds like they are talking about an idea rather than an actual vessel. "Entirely covered in a sheathing of brass" though the photos show brass only on the top. In the text labelled "read this" it refers to two horizontal rudders, neither of which are visible in the diagrams or the photos.

Still a cool concept and inventors have to start somewhere.

Sounds like one of the many examples of found tech. IMHO, the fact that Estarriol was supposedly smart enough to pull the plans for this sub out of the aether, but not smart enough to realize that an underwater gun is impractical at the time speaks volumes(not to mention the question of what exactly did they think they needed to shoot underwater). My money is on Estarriol fit and behaved with the narrative enough that he was given credit for inventing tech TPTB were repurposing as their own.
J

Fiction almost certainly. If these late 1940s problems and solutions are any guide.
EDIT to add
I remembered I was working as an apprentice on the conversion of two ammunition barges. One was to be a tanker the other was to be a test bed for a hydrogen peroxide engine. I don't know what happened to the barges as I was moved to a different part of the shipyard, different department within a few months. Point being as late as 1980/81 the Royal Navy had still not figured out how to make these engines safe for use so the claim the op chap built one when he did and fitted it in a submarine and it worked is complete bollocks quite frankly.

As with all of the people which the mainstream narrators (I mustn't stray from the approved narrative as I will lose my status, career,pension etc) claim built 'the first' this one collapses into the lie that it is on even cursory inspection. All I feel is going on is the simple obfuscation of whoever really invented the technology, or whoever found the technology in a workable condition and figured out what it was used for or how it worked or what it ran on. (The latter found stuff is implausible to me but not impossible though no clue how one would figure out the veracity of the claim of it being found lying about).

It's either that or some eminent quackademic made a guess 'back in the day' and because of his eminence no-one dared question it during his lifetime and when he snuffed it his guess had become the 'mainstream narrative' and that cannot be argued against. Holy has many meanings it seems,
Has anyone else noticed how it is nearly always a 'he' which is invoked as the inventor or founder of things?
Perhaps there is the frame of reference needed to figure out where the real history lies. Research the hell out of anything attributed to a male inventor but flip it and look for the female connections to see if that reveals some true history. Might be worth a shot if one is so inclined.
Last edited: Jul 9, 2021
You must log in or register to reply here.
Similar articles