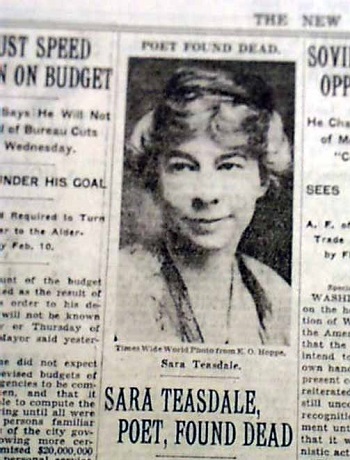 Sara Teasdale
1884 - 1933​
Sara Teasdale was an American lyric poet. She was born Sarah Trevor Teasdale in St. Louis, Missouri, and used the name Sara Teasdale Filsinger after her marriage in 1914.

There Will Come Soft Rains
(War Time)
There will come soft rains and the smell of the ground,
And swallows circling with their shimmering sound;

And frogs in the pools singing at night,
And wild plum trees in tremulous white,

Robins will wear their feathery fire
Whistling their whims on a low fence-wire;

And not one will know of the war, not one
Will care at last when it is done.

Not one would mind, neither bird nor tree
If mankind perished utterly;

And Spring herself, when she woke at dawn,
Would scarcely know that we were gone.​
Click to expand...

The old farts will be together at the end!​

I've seen the light in the rain
blue crystals at their sides aglow with promise
Nimrod's Army marches in the valley
feeling no pain.

No rain, no gain.

I have an opinion that I want to share. I am convinced that the so-called Apocalypse began about 200/230 years ago. I don't want to write a long and boring analysis of the book of Revelation, but it seems to me that many of the seals have already been opened, that many of the signs from heaven have already taken place, that the 4 horsemen have already been sent and that the persecution and almost total destruction of true spirituality by the Roman Empire / Catholic Church, has already occurred and also that the sacrifice of countless pure souls has already occurred and is continuing (wars, pedophilia, human sacrifices, false medicine, etc.). So, if I am right, we are in the period where all the truth is revealed from the roofs of houses (internet technology) and the opponent, whatever it is, will soon be thrown to the bottom of the well and tied up there for the next 1000 years.

1933 could be the date we are looking for. Hopefully I will get back to writing one day.

KorbenDallas said:
1933 could be the date we are looking for. Hopefully I will get back to writing one day.
Click to expand...

knowledge has been known to weight heavily on a persons soul. The noise is never your friend , " forward young knight ".

Verity said:
I'm probably missing something. What is the date relevance? And why have you stopped writing- do you mean posts here or irl? I trust all is well!
Click to expand...

I'm working on a little something. It's not much and is more of a question. The second question was answered in a PM.