While looking for the origins of Saint Patersburg, I came across this 1539 map called Carta Marina. After zooming in on Iceland, and googling some of the cities, I ran into another map called Da Islandia Insula, and attributed to 1566. Below are some of my observations. This is a reader's article, and requires paying attention to detail.
Personally, I find the below two maps rather fascinating. Da Islandia Insula'1566 is a map of the island of Iceland. Carta Marina'1539 is a much bigger map. For the purposes of this article we are going to limit ourselves to the island of Iceland only.

Map Links:
It appears that these maps could be revealing way too much. The question is... too much of what?

The 1566 map of Iceland DA ISLANDIA INSULA has no known author. Web sources tell us, that it uses Carta Marina of Olaus Magnus as its model for Iceland, even if it is not obvious at a glance. If you flip the country over and turn it 90° right, you can see that it resembles Carta Marina´s Iceland. Camoccio published practically the same map under the same title in 1570 and 1574.

In a nutshell, Mr. Magnus lived (allegedly, of course) between 1490 and 1557. The Carta Marina map was published in 1539. Its full name is Carta marina et descriptio septentrionalium terrarum, which translates to Marine map and description of the Northern lands.


Map Comparison​
I am going to put Da Islandia Insula, and Carta Marina Iceland side by side with each other, and with the Google Map of Iceland. For right now, let us just see whether these two older maps are somewhat accurate as they pertain to today's outline of Iceland. Please make your own conclusion how representative of our contemporary Iceland these maps are. 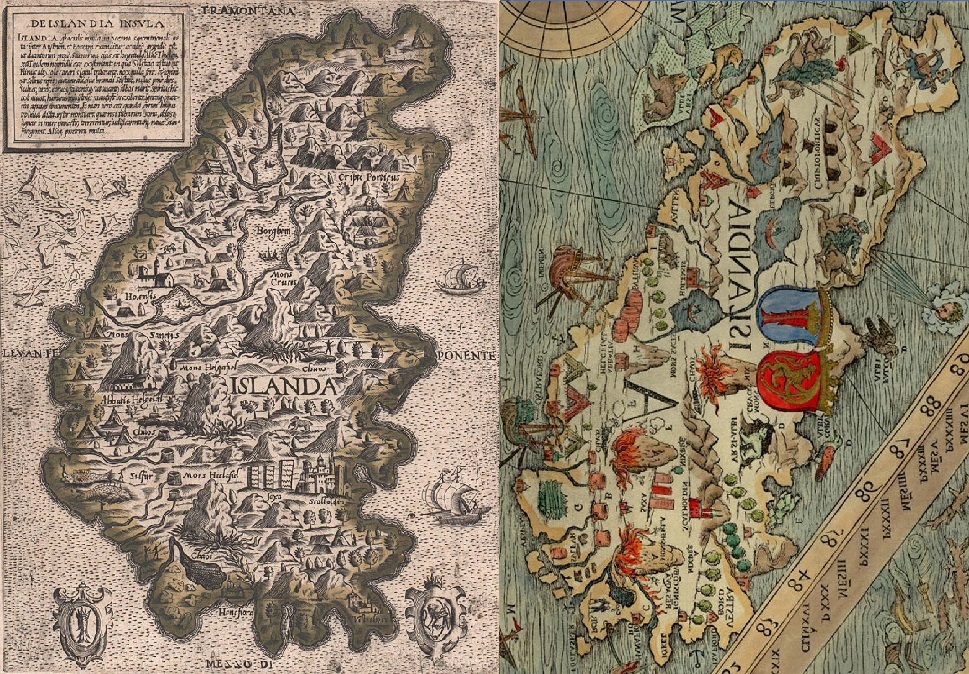 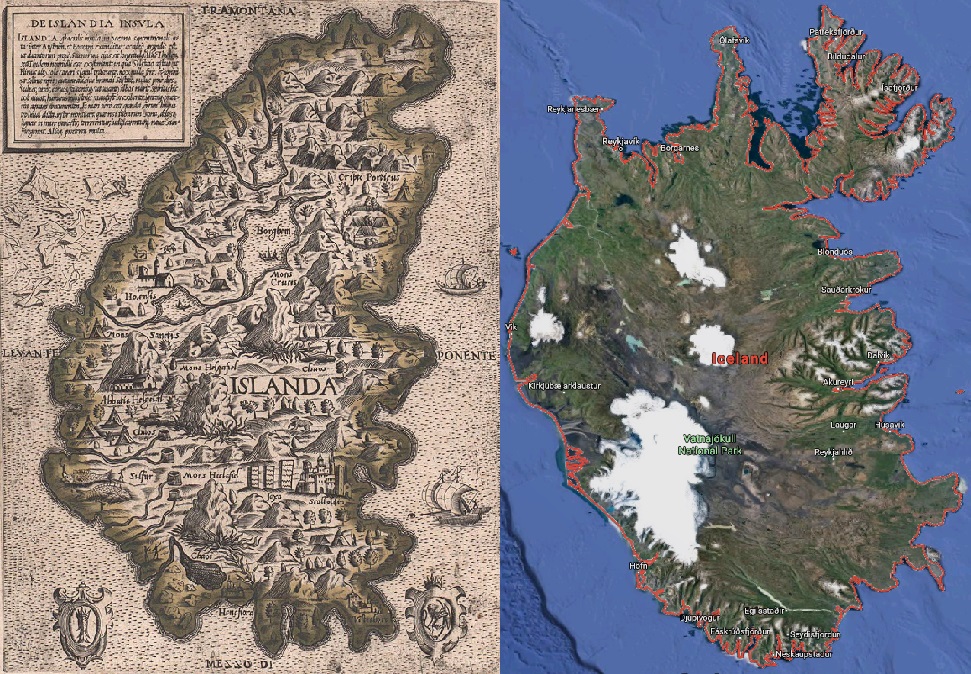 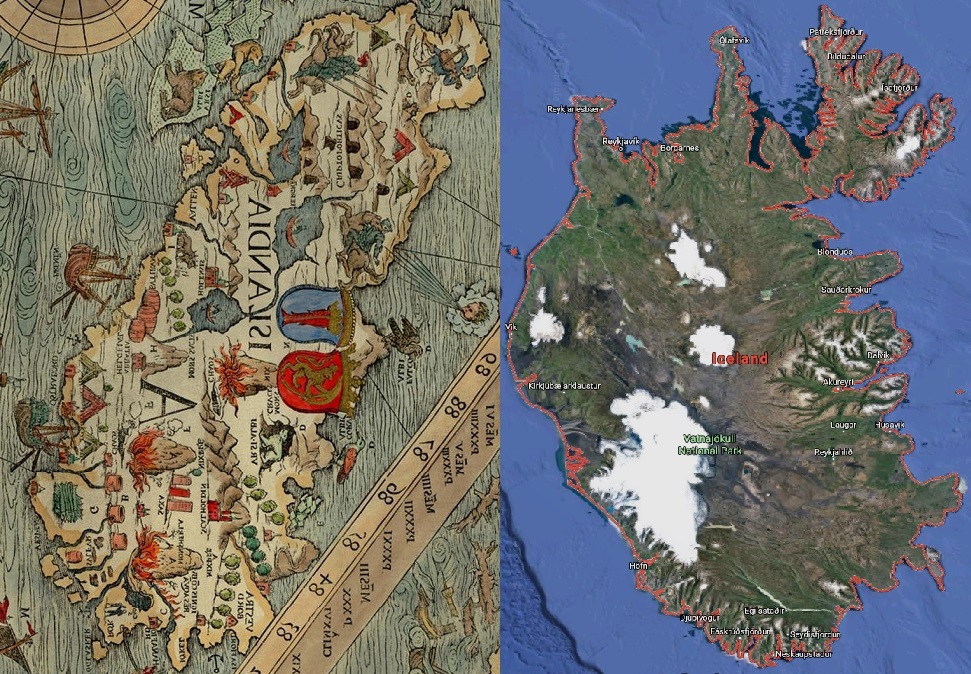 ​
It is probably hard to judge which map came first, for the 1566 explanation sounds like they do not really know. The two look fairly similar, but are not quite the same. The difference is primarily in the outline of the island, while the contents are very much the same. Whether one of the two is a poor copy of the other is unknown. The earliest date given to us by the official history is 1539 (for the Carta Marina). That's the date we are going to use.

​
Judging by what we see on the older maps, Saxa and Scalholdin appear like two major cities, or towns. At the same time, today's state of things suggests that they were not.

1892 - ‎Old Norse literature
​
Some history of Scalholdin as we know it today:

1625: Purchas His Pilgrimes: In Five Bookes​
But when we search for the historical images of Scalholdin, we run into pages like this one: The historical Skálholt Episcopal See in South-Iceland. And this is where a total different picture gets painted. 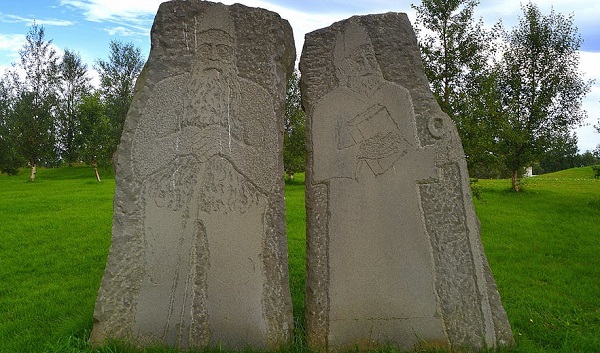 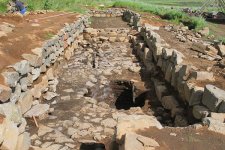 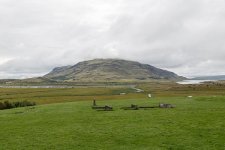 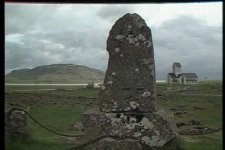 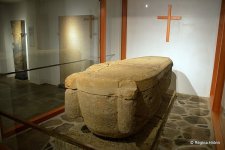 ​
A sarcophagus was found in 1954 during the excavation for the foundations of the church, containing the remains of our bishop Páll Jónsson, who died in 1211. The sarcophagus is on display in the church crypt/cellar. The sarcophagus is by far the most important old relic to be found at Skálholt. In the crypt, you will also find 2 Icelandic tombstones and foreign tombstones of 5 bishops and 1 councillor. 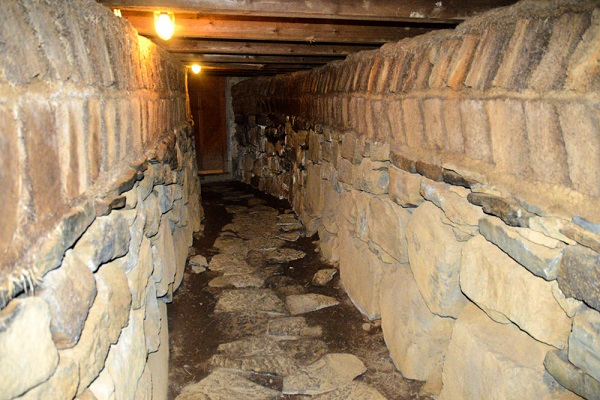 ​
Apparently Bloody Vikings are being blamed for the annihilation of Scalholdin. I guess, they also destroyed Saxa, and to confuse everybody named a coast area geyser after it.

Catch 22: Today's Skálholt is not really our Scalholdin. At least their respective locations on the map do not match. 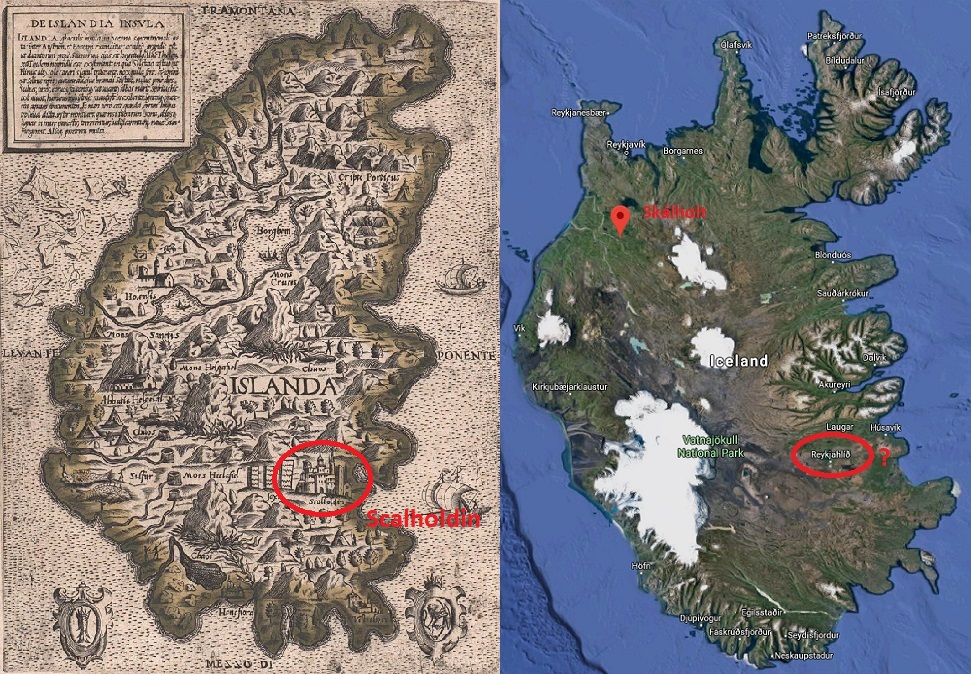 Scalholdin a.k.a. Reykjahlíð?​
Yup, I think our Scalholdin was located where today's Reykjahlíð is. This photograph below represents the village of Reykjahlíð. It has approximately 300 inhabitants and is situated on the shores of Lake Mývatn in the North of Iceland.

And Scalholdin was supposed to be the biggest city in Iceland back in the day. 300 inhabitants and no ruins hardly cut it.
Attention: This bullet above states - protected as a nature reserve. In the US we have National Register of Historic Places, and National Parks. On a bigger scale we have UNESCO World Heritage Sites. In Iceland we, apparently, have National Parks and Protected Areas.

Reykjahlíð
On the shores of Lake Mývatn​
Traditional BS comes first: Mývatn is a shallow lake situated in an area of active volcanism in the north of Iceland, not far from Krafla volcano. The lake was created by a large basaltic lava eruption 2300 years ago, and the surrounding landscape is dominated by volcanic landforms, including lava pillars and pseudocraters.

This is where the reader needs to get familiarized with my earlier articles, for this lake did not exist in 1539 (IMHO):
Wikipedia article pertaining to Lake Mývatn has 5 or 6 photographs in it. But they chose poorly, and possibly deliberately. Here are a few real photographs covering the area of Myvatn Lake, Iceland.

More Images​
As a matter of fact, the entire Northeast of Iceland looks like the "laked" images below. What happened there?

Where is the real Scalholdin?​
Obviously, we do not appear to have any real ruins of Scalholdin remaining in the area. Yet, we have these "natural" formations similar to the one represented by the image below. Could these be the remnants of the once great city of Scalholdin?

​
KD Opinion: I think Scalholdin, and Saxa, were annihilated by some force which was not supposed to exist around 1539. Yet, we might have enough evidence that such force did exist. If it was a natural force similar to asteroids, there would be no reason to hide it from us. Yet, the reality appears to be hidden. My only reasonable conclusion would be something similar to the War of Gods. Mahabharata type of war that is.

Rectangular Buildings​
I do not know about you, but to me the below 1539 buildings look bizarre. I am not sure they are representative of the time frame they are attributed to. Did they really build like that prior to 1539. To show what I mean, I made this "two time frames" compilation below. Whether the space between those wavy lines on the map buildings represent stories, I am not sure. At the same time, if they do, the one on the right would be 6 stories high. To be honest, the real 1566 version of the map shows more of them lines. So... whatever they are, those lines.

​
While the above Saxa, and Scalholdin appear to be two different cities, the structural resemblance is rather strange. At least to me it is. If I were to speculate based on the other items from the same maps, these contemporary looking buildings could be the remnants of the previous civilization. One way or the other, they do not exactly belong in 1539 as we know it.


ICE: Water Towers & Lakes​
I do not know what these water "towers" were supposed to be, (may be you have an idea). It appears we have river sources originating at the above four locations.

​
Then again, may be we have some sort of a Sulfur Factory of the previous civilization. Sulfur and Chaos... 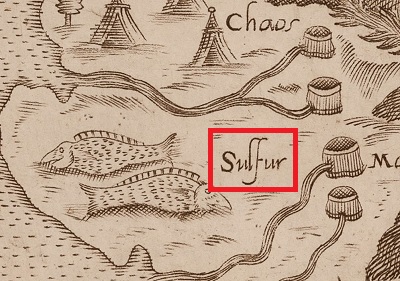 ​
At the same time, what do I see is that these water towers, and two lakes are very conveniently iced over on the Google Map below. What a coincidence. There appears to be more questions than answers. 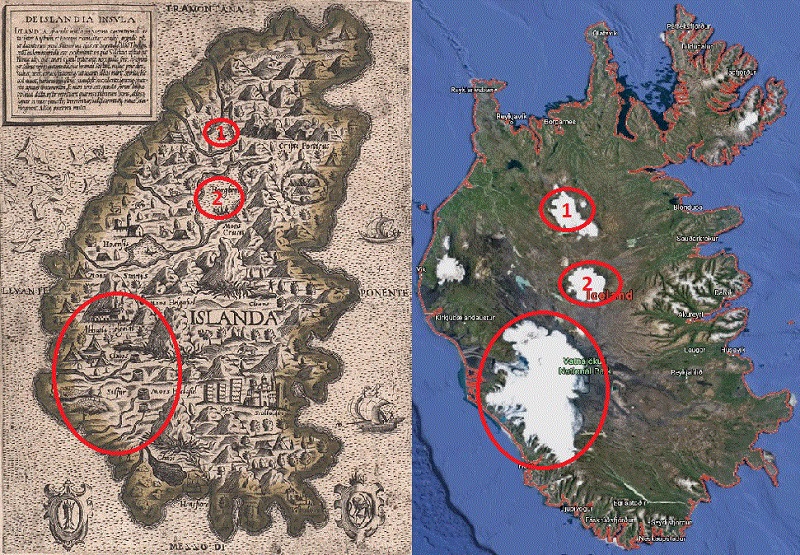 Hekla Volcano​
I am not sure how the above older maps account for the famous Volcano of Hekla. It appears we do not even have any mountains in that area in 1539. Maps of Ortelius (high res) produce more questions than answers, for they place Hekla at a totally different location. Wikipedia conveniently covered it up with publishing only a portion of the Ortelius's map.

for larger images reference sources below
​
Another interesting thing we can see on the maps authored by Ortelius is where he places Skalholt. It's west of Hekla, like way west of Hekla. This confirms our placement of Scalholdin, which is located North from Hekla. It can mean only one thing: Skalholt is not Scalholdin.

Cryptoporticus​
In Ancient Roman architecture a cryptoporticus (from Greek crypta and porticus) is a covered corridor or passageway. The usual English is "cryptoportico". The cryptoportico is a semi-subterranean gallery whose vaulting supports portico structures above ground and which is lit from openings at the tops of its arches.

​
May be somebody can figure out where this "covered passageways" could lead to, but Ancient Roman cryptoporticus looked something like this. I did not find any ruins of this structure in the contemporary Iceland. Chances are, I simply did not look good enough. Pretty sure the map did not mean Turf Houses. 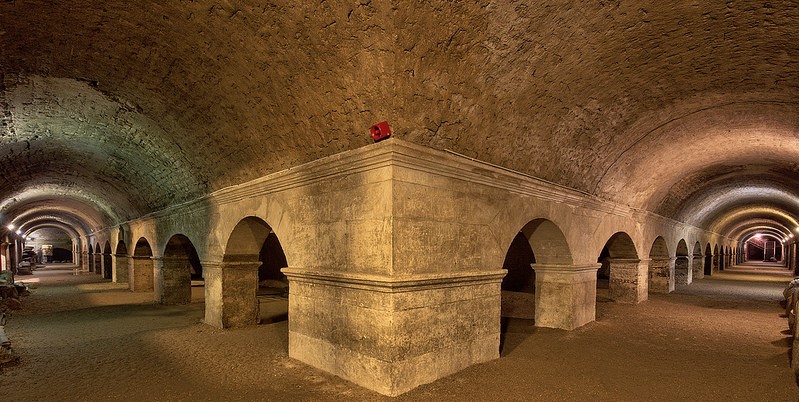 North-South Issue​
I think this Da Islandia Insula could be a much older map, when compared to all the other ones, including the 1539 Carta Marina. Why do I think so? Because the North on this old map appears to be where today's West is.

Olaus Magnus - Wikipedia​
Carta marina - Wikipedia​
Life of a mapmaker​
Da Islandia Insula - Mapping Iceland​
Skálholt | Iceland Cities​
Lake Myvatn with North Iceland Waterfalls & Nature Baths​
Pseudocraters in Myvatn Lake, Iceland​
Between the North Sea and the Norwegian Sea​
Cryptoporticus - Wikipedia​
KD Opinion: Now, I'm not saying that I'm right about any of the above. These are just my observations, and here is what I think: