The Peacock Clock is a large automaton featuring three life-sized mechanical birds. It was manufactured by the entrepreneur James Cox in the 2nd half of the 18th century and through the influence of Grigory Potemkin it was acquired by Catherine the Great in 1781. Today it is a prominent exhibit in the collections of the Hermitage Museum in Saint Petersburg.

The clock was brought to Russia in pieces. At Potiomkin's request the Russian mechanic Ivan Kulibin set it in working order. From 1797 to the present day the Peacock Clock has been one of the Hermitage's most famous exhibits. It is, moreover, the only large 18th-century automaton in the world to have come down to us unaltered and in a functioning condition. 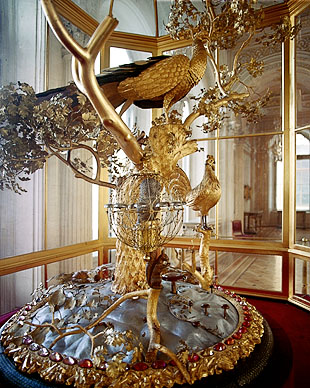 ​
Let us see what this beautiful mechanism does, and contemplate on whether it could have been built with the knowledge and tools available in the 18th century. I think this is another creation of the previous civilization with proper knowledge and education, and James Cox was just assigned to be its inventor. Below this Peacock Clock's details we will look into this. Jumping ahead, it is very questionable that Mr. Cox had built anything.

Detailed review of the person who repaired the Peacock-clock, Ivan Kulibin, was done my other article titled Kulibin's egg-shaped clock presented to Catherine II in 1769.

Every Wednesday, at 7 o’clock, the elegant show starts:

Well, let us take a look at this James Cox The Inventor.

James Cox (ca. 1723–1800) was a British jeweler, goldsmith and entrepreneur and the proprietor of Cox's Museum. He is now best known for creating ingenious automatons and mechanical clocks, including Cox's timepiece, powered by atmospheric pressure, the Peacock Clock and the Silver Swan. - says Wikipedia

Strange enough, I was unable to find any painting or some sort of engraving type image representing James Cox. There were a couple paintings suggesting that it was Mr. Cox, but upon cross-referencing, I learned that it was not him.

No matter how hard I tried, I could not find any information on where Mr. Cox acquired his skills. This is important, because just like with Ivan Kulibin, building mechanisms of this peacocks magnitude requires specific knowledge. The knowledge requirements would need to be relatively similar to those of Kulibin:
That is when I ran into an article published by the Metropolitan Museum of Art. It essentially states that there is ZERO evidence of Mr. Cox building any of the creations attributed to his name :

On the trade card bearing the London address At the Sign of the Golden Urn, James Cox proclaimed himself a goldsmith who “Makes Great Variety of Curious Wares
in Gold, Silver and other Metals. Also, Amber, Pearl, Tortoiseshell and Curious Stones.” Yet Cox seems to have spent most of his career as an entrepreneur, and in the early 1770s he claimed to employ between 800 and 1,000 workmen. Most of them were part of a unique network of independent suppliers and craftsmen that existed in London in the second half of the eighteenth century. These craftsmen rarely signed their work. Only a few of them have thus far been identified, but their existence made possible the great variety of objects that Cox exported. The name of a maker was required by law to be visible on a watch with an enameled dial made in London for export, a circumstance that explains the presence of Cox’s name on the dials of the watches incorporated in the objects illustrated here.In the watchmaking trade, Cox would have had to depend upon skilled craftsmen, for there is no evidence that he himself ever made a watch movement. How extensively he contributed to the design of the luxury items that bear his name remains to be established.
Click to expand...

In light of the above, I am not sure what else needs to be said. Author's of the article whose titles are listed below, said everything for me:
Summary: Another one of the so called "ahead of it's time" inventions has serious issues with its history. Apart from the actual existence of the Peacock Clock, there is no evidence that conventional education (self study, skills, inspiration, etc.) of the 19th century could have produced this masterpiece. 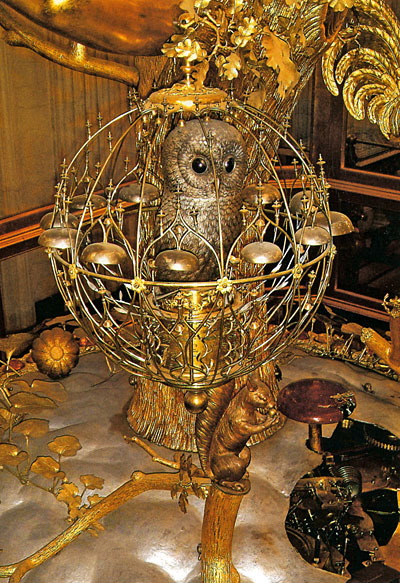 I stand by my opinion that this is a regular example of what level of technology and education, the previous (and not so distant in time)
civilization was at.
Click to expand...