I doubt too many people know about this electric train. The Brighton and Rottingdean Seashore Electric Railway was a unique coastline railway in Brighton, England that ran through the shallow coastal waters of the English Channel between 1896 and 1901. 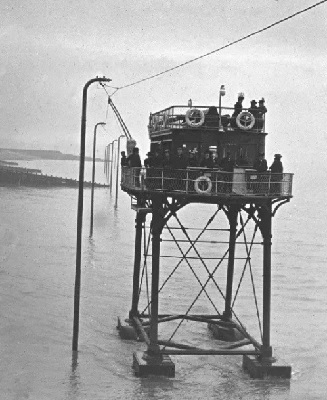 The aim of the railway was to extend the reach of the existing Volk's Electric Railway eastward. Since the eastern section of coast ran out of seafront, and quickly ended up with cliffs that were directly against the sea, Volk was confronted with the intimidating and costly prospect of an expensive project to build the railway extension onto the cliff-face. 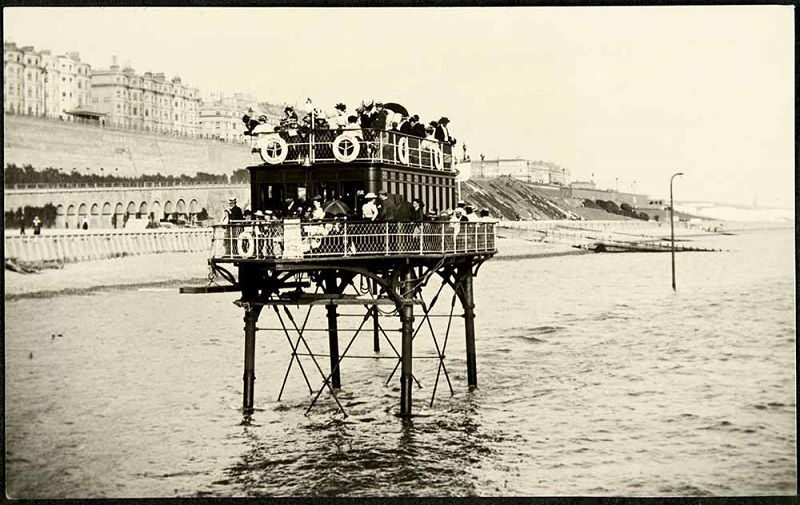 ​
The railway itself consisted of two parallel 2 ft 8 1⁄2 in (825 mm) gauge tracks, billed as 18 ft (5.5 m) gauge, the measurement between the outermost rails. The tracks were laid on concrete sleepers mortised into the bedrock. The single car used on the railway was a 45 by 22 ft (13.7 by 6.7 m) pier-like building which stood on four 23 ft (7.0 m)-long legs. The car weighed 45 long tons. Propulsion was by electric motor. It was officially named Pioneer, but many called it Daddy Long-Legs. Due to regulations then in place, a qualified sea captain was on board at all times, and the car was provided with lifeboats and other safety measures. 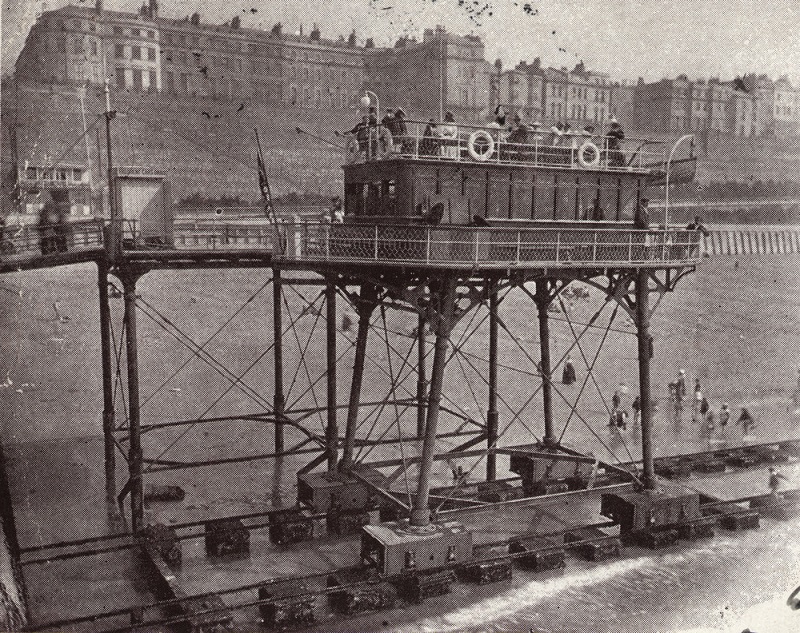 ​
Construction took two years from 1894 to 1896. The railway officially opened 28 November 1896, but was nearly destroyed by a storm the night of 4 December. Volk immediately set to rebuilding the railway including the Pioneer, which had been knocked on its side, and it reopened in July 1897. 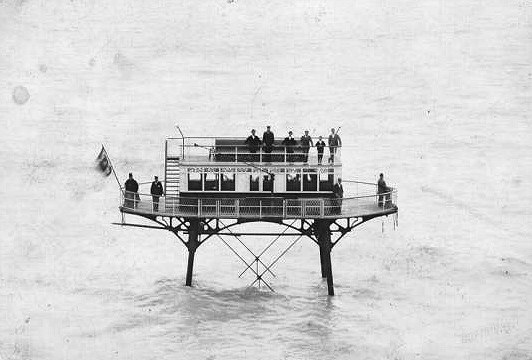 ​
The railway was popular, but faced difficulties. The car was slowed considerably at high tide, but Volk could never afford to improve the motors. In 1900, groynes built near the railway were found to have led to underwater scouring under the sleepers and the railway was closed for two months while this was repaired. Immediately afterward, the council decided to build a beach protection barrier, which unfortunately required Volk to divert his line around the barrier. Without funds to do so, Volk closed the railway. 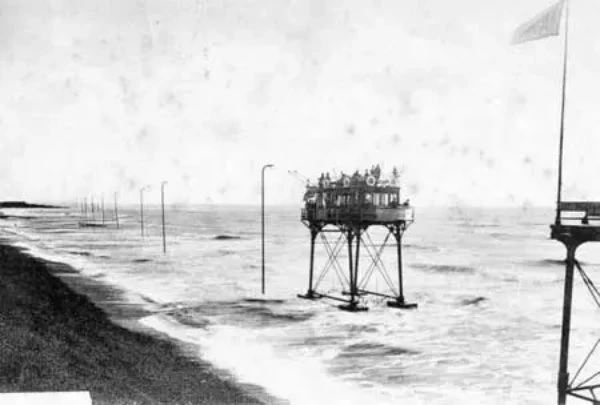 ​
As you can see above, the train traveled along the coast line, and the amount of water depended on high/low tides. Was this solution really superior to extending the landline over the cliffs?

Below we have an 1893 plan of the proposed ‘Brighton and Rottingdean car on stilts’. 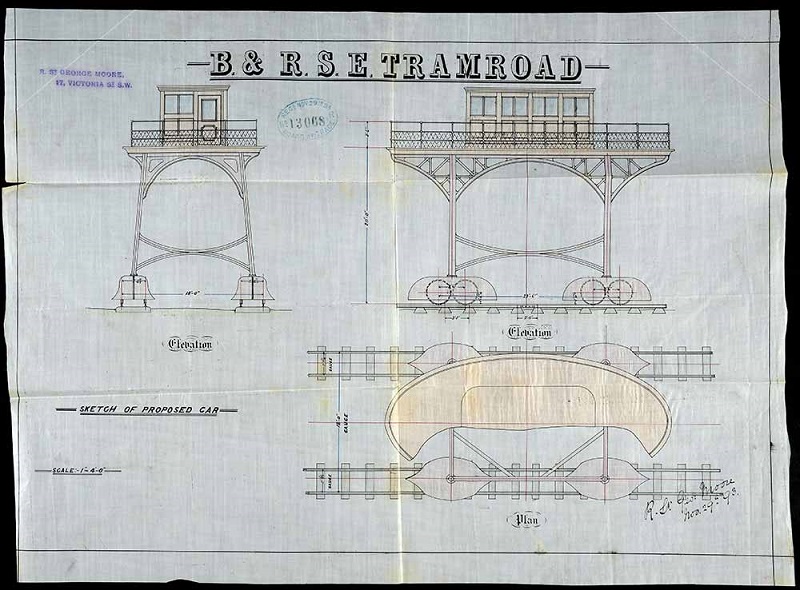 Apparently the water train was advertised, and the fare was 6d. each way. I am not sure what "d's" they were talking about. If you know, please share. 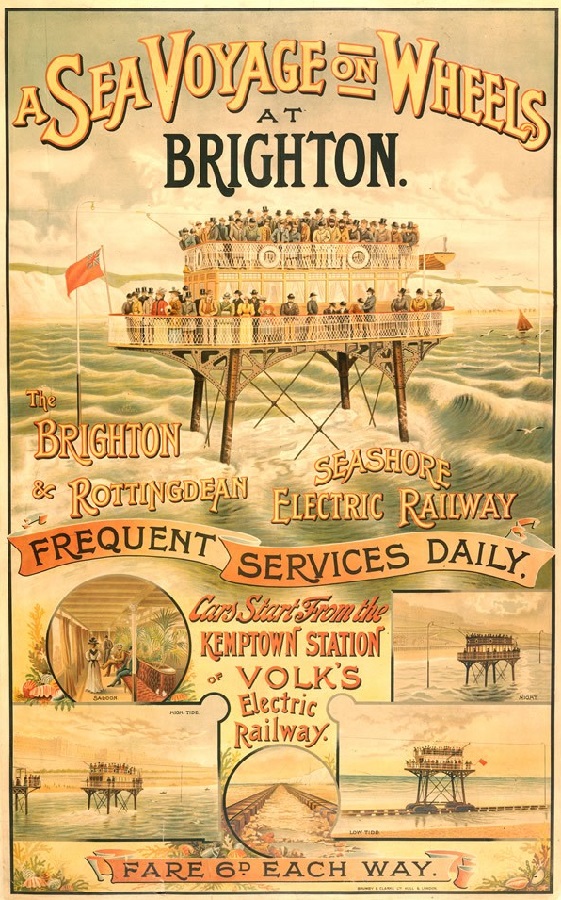 ​
In 1901 the right-of-way was broken up for construction of the barrier. One further attempt was made to raise money for a conventional over-water viaduct along roughly the same route. The track, car and other structures were sold for scrap, but some of the concrete sleepers can still be viewed at low tide. Eventually Volk's Electric Railway was extended onshore, covering a portion of the same distance; it remains in operation. 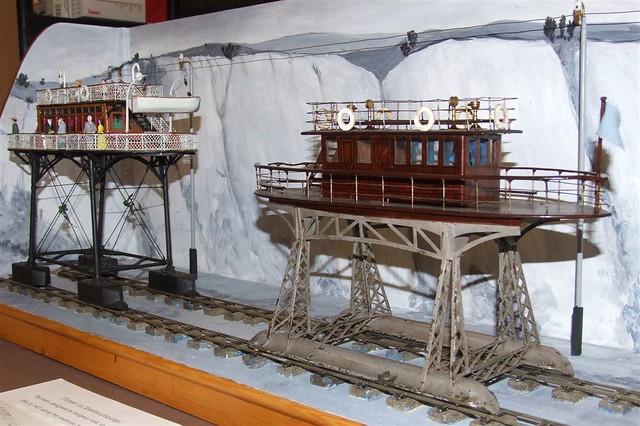 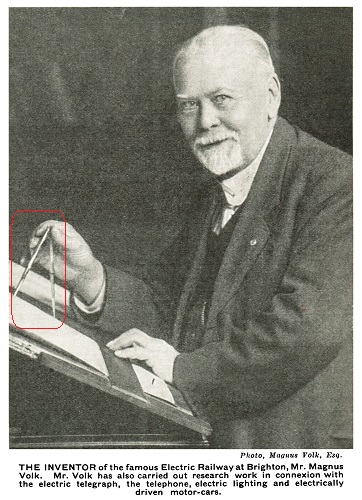 1851–1937
​
Magnus Volk was a Brighton-born inventor and electrical engineer who achieved a number of early successes and world firsts in the field of electrical engineering, including the world's first electric railway (still running!), early electrical public lighting and telephony, and early examples of electric cars.
Volk was born in a house on Western Road in 1851. During his early life he had some success producing parlour telegraph sets which were little more than toys for rich men to impress their friends with. He first became properly well-known in 1879 when he installed the first telephone line in Brighton from his house in Preston Road to another nearby in Springfield Road.

The Brighton and Rottingdean Seashore Electric Railway ran from 1896 and sadly shut after five...

KD: Some things just make you wonder. This train is one of those for me, for I find the official explanation hard to believe. Is it plausible enough to meet the plausibility threshold? I don't know. 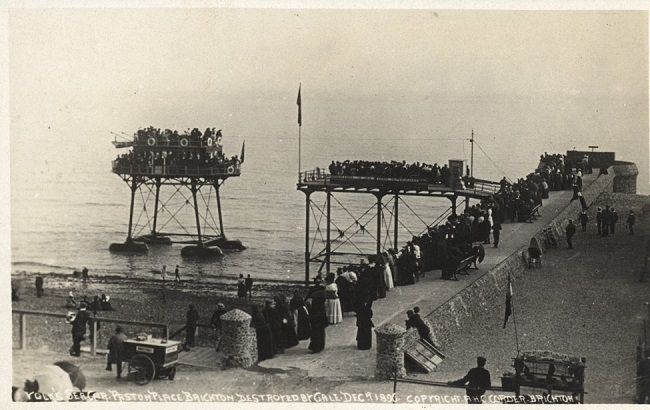 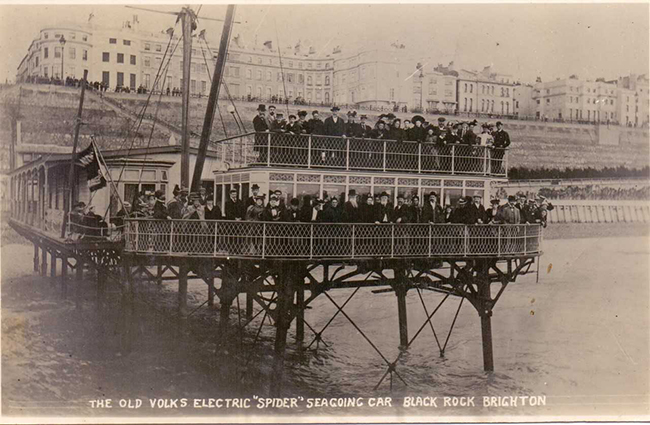 Yeah. Like what is it with these oddball, obscure tram projects getting destroyed almost immediately after being opened and then having to be reconstructed?

Sadly, catastrophe struck just a week after opening, as Brighton was hit by a fearsome storm which destroyed the old Chain Pier, seriously damaged the original electric railway and caused immense damage to the new venture.

During the storm, the tram had broken free from her Rottingdean moorings, slid down the 1 in 100 slope from the jetty before ending up on her side, suffering major structural damage.

Despite the ferocity of the storm, the track survived with only one breakage and the overhead wire remained intact.

After being salvaged by Blackmore & Gould of Millwall, 'Pioneer' was rebuilt with new, longer legs adding another 2ft to the tram's height with the railway, remarkably, reopening on July 20th 1897.
Click to expand...

KorbenDallas said:
Apparently the water train was advertised, and the fare was 6d. each way. I am not sure what "d's" they were talking about. If you know, please share.
Click to expand...

Edit: The video seems to have been made by Robert W. Paul. Here's his wiki, a site attributing the film to him in 1897, and IMDB confirming him as the producer for the documentary "Rottingdean Electric Railway" (although IMDB is probably just knows from the other site). His wiki is worth a read, as it's full of crazy accomplishments and strange timing coincidences, which seemingly was the custom at the time.
Edit edit:Here's what I was really looking for though:

Throughout his film career Paul produced more than 800 titles, quitting the business in 1910 and destroying the negatives of many of his films, for which his motive remains a mystery.
Click to expand...

Whatever wasn't destroyed eventually ended up with the British Film Institute and they put everything out on a DVD in 2006. I presume that's where our clip in this thread came from. Anyway, sorry for the minor detour, but I really think it's important we understand where these videos come from.
Last edited: Mar 4, 2021
You must log in or register to reply here.
Share:
Facebook Twitter Reddit Pinterest Tumblr WhatsApp Email Share Link
Top