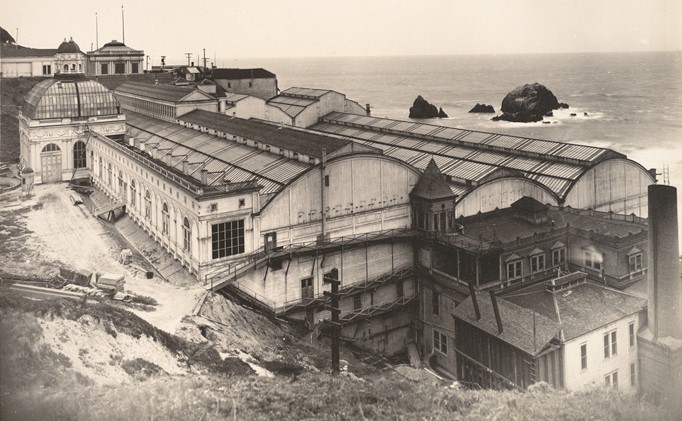 During high tides, water would flow directly into the pools from the nearby ocean, recycling the two million US gallons (7,600 m³) of water in about an hour. During low tides, a powerful turbine water pump, built inside a cave at sea level, could be switched on from a control room and could fill the tanks at a rate of 6,000 US gallons a minute (380 L/s), recycling all the water in five hours.

Facilities included:
The baths were once served by two rail lines. The Ferries and Cliff House Railroad ran along the cliffs of Lands End overlooking the Golden Gate. The route ran from the baths to a terminal at California Street and Central Avenue, now Presidio Avenue. The second line was the Sutro Railroad, which ran electric trolleys to Golden Gate Park and downtown San Francisco. 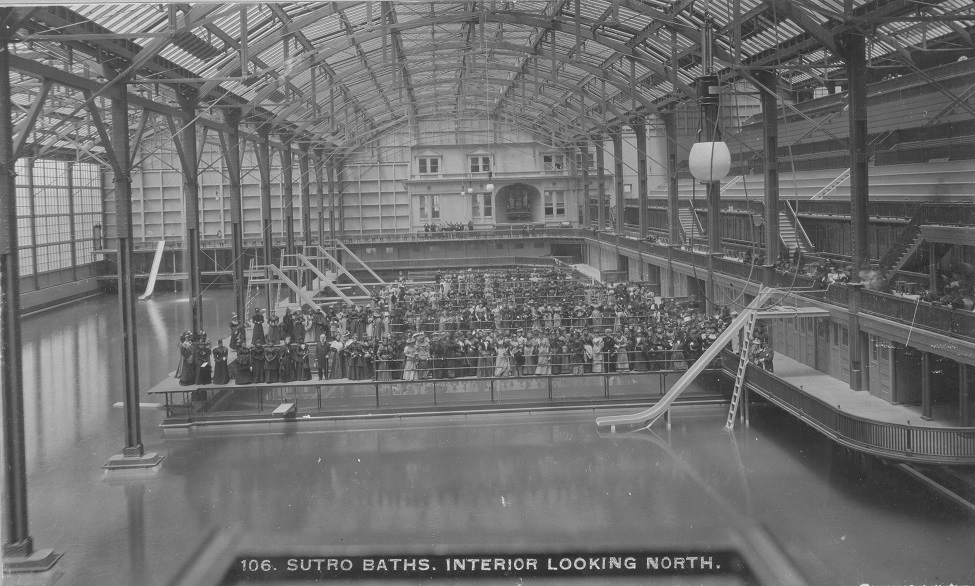 (strange people, by the way) 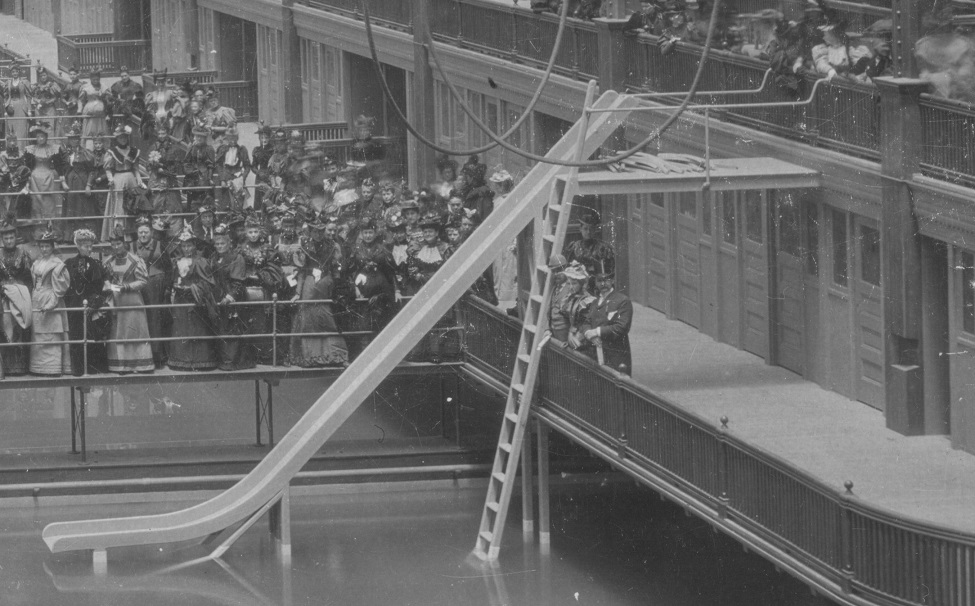 Notice the way they have to climb out.

KD: This 1896 Sutro Baths, which conveniently burned down in 1966, reminded me of a renovated, and repurposed waste water treatment plant. You can feel free to ridicule me on this one, but those people in the image above looks tremendously uncomfortable trying to climb up onto the platform. How do you make a water pool out of a treatment plant? Just add some water slides and start selling tickets.

From the above 1894 photograph​
Some links:
Anyways, there are plenty of additional pictures on the internet. Please feel free to share your opinions on what it really was.
Click to expand...

New member here. Thanks for allowing me to participate.

I believe it is an extremely efficient meat processing center - butchering, hide treating, and food processing plant. We have everything we need (Salt. Water. Heat Source (Flume Pictured) and Cold Ice Rink? Additionally we would have lots of room for storage and drying, and the reason I feel that this is important and what it comes down to:

Therefore this will be a longer post and I hope worthy of greater discussion. I will attempt to explain various points in greater detail by referencing the other work you've done KD, but I believe you've solved a great deal of how the 'science' of much of the Tartarian infrastructure worked already, including flight, and therefore I will address it first as a parallel.

Crematoriums - Why the purpose is hidden

Combine these two ideas and what do we understand? Decaying matter puts off gas. Gas that would be lighter than air. That gas would then be collected. In other words are the Crematoriums (As described - conveniently located at a 'crossroads' could actually be 'fueling stations')

Image of a Zeppelin Refueling

The understanding of how gasses would work, and how to collect them would be necessary for greater advancements in the field of flight and many other sciences. A problem is you would need a way to make these gasses affordably or you're starting whole industries for essentially 'waste'. What I believe occurred is that we had a 'society' look at all these wasted 'human bodies' after somebody died and say why not? Why not use these gasses - and I believe it's even more than that...

What if every tiny bit of the body is used? Isn't that what we see actually happening in these reported 'customs' including Egyptian/Mesopatamian - is a 'secret technology' Alchemy - where extrodinairy things occur and the experimentation that was done to achieve it. That this technology somehow harnesses the 'essences' of humans themselves.

Precious Metals from Cremating Humans - This is done still, today.

A hidden technology tied to religion - secrets. That some things were secret the entire time and there's no explanation as to how they occur. Elites, convincing the population to participate in 'rituals' in order to facilitate a certain outcome. And then that same technology is used on a grandeur and grandeur scale -

So there's another direction that it could be, a technology war used to 'clean house' and basically pull back technologies that had leaked into the public domain, and there is a reason I believe that the structures were destroyed -

When you have facilities and structures like this 'Bathouse' or a meat processing plant - and the knowledge to make them, something magical happens. Efficiency like never before. By harnessing the ocean you are able to use extremely efficient methods to provide food, clothing, salt, resources all at an 'industrial/small business' level?

Because technology was being advanced in all directions. We had flying ships and also food processing facilities that took horse meat - amongst others, because we had a society that didn't waste. A society where transportation, a horse - wasn't 'that' expensive, in fact it was an investment. That even when the horse got too old it was turned into food, it's bones into building material - it's hair, too... It was a self contained decentralized financial ecosystem that naturally expanded to the needs of the population.

The next thing I will draw attention to is the 'Ladies of National Medical Convention'. How important is that? A 'society' that helped take this 'useless facility' and make it into something entertaining/useless instead of productive. What would the implications of that be for a local economy? For an industry?
A facility perfectly situated at a trading crossroads and a port able to process thousands of pounds of food and leather a day. Part of entire supply chain, a supply chain that enabled a society like the Tartars -

And that's my next point - the claim that the United States was a part of Tartarian Empire - what if the concept of Tartar goes beyond borders - what if it is an idea, or ideal. A way of labeling people into a particular 'strata' of civilization. One, say, where technology is shared, where it has reached a certain level of understanding and industrialization.

There are a lot of unique cultures being a part of this empire - an empire that still allowed individualization, that wasn't conquered, at least not through war and oppression, but rather enlightenment. Not just building wonders but through sharing the way in which they were built? What if the idea of being Tartarian is itself a philosophy? Would that itself explain why there is no currency? Perhaps the Tartar currency was knowledge?

The technologies that occurred after the fall of this empire all rely on on centralized control. That at the same time as these old structures were being forcibly fazed out, new options were being presented. Options that almost unilaterally focused on consolidating power, especially at the government level. Taxes. Introduction of Zoning Laws. Infiltration and conquest - a secret war. One where 'strange weapons' were only a part of it.

It's a very circular argument, but those zoning laws, and the laws that followed made it so that that a wonder like an oceanside meat processing plant couldn't exist again. It made it so all these people you are looking at? That's the middle class. That's the true Wonder - zoning and employment and tax law destroyed all that.

That is the point that I am trying to make, that all this 'brainwashing/destroying history' and attempting to hide these marvels - isn't it just as dangerous of an idea to the 'ruling class' that it could be achieved without magic? That just their existence - that people could look at them and say hey, hold on...

And that the pools have been so intentionally muddied that it's impossible to really point at any particular cause - because there's so many, but at the heart of it all is the growing costs, taxes, and burdens. That San Francisco was rebuilt after the 'fire' that destroyed the entire thing because a supply chain existed that made it possible. A supply chain that was incredibly resilient, that was made up of thousands of unique structures like this 'bath house'.

A supply chain and society that has been destroyed by its handlers, it's elites and financial institutions for their own control. That are now panicking because the internet and people like JD has revealed it.

Again, thank you for sharing all this work. Fascinating stuff - all of it.
J

To avoid copious copy/paste action here is a link to an archived discussion about these baths.
J

Nearby was the magnificent Sutro Baths, a huge oceanside glass palace with six swimming pools filled with salt water. (Next to the Cliff House.) It seems kind of unbelievable now, but we took everything in the city for granted. There were pools of different temperatures, a diving pool, a cold pool. People wore old-fashioned, wool bathing suits. You can still see the foundation just north of The Cliff House.)
It was never a commercially successful operation and burned to the ground in 1966
Click to expand...