Posting this to emphasize that all of our contemporary country vs. country conflicts are made up, and are a part of the game. In my opinion, countries answer to the same Controller (TPTB). Back in the day, when our current PTB was in the process of taking over the World, they were more revealing in their actions. It is somewhat easy to pinpoint areas that needed to get subdued/conquered. Indeed, it is obvious where the New World powers were pulling their resources together to annihilate the remnants of the Old World setup.

Qinq Dinasty​
The Qing dynasty, officially the Great Qing, was the last imperial dynasty of China. It was established in 1636, and ruled China proper from 1644 to 1911. The Qing multi-cultural empire lasted for almost three centuries and formed the territorial base for modern China.
KD: The incoming PTB was not gonna let the old knowledge to survive.

I do not know what the true name of the overall old regime was, so I will simply use Tartary in its stead. What you see in the table above can also be seen during the 1854-55 Siege of Sevastopol.


The Boxer Rebellion
2 November 1899 – 7 September 1901 ​
The Boxer Rebellion was an anti-imperialist, anti-foreign, and anti-Christian uprising that took place in China between 1899 and 1901, toward the end of the Qing dynasty. It was initiated by the Militia United in Righteousness, known in English as the Boxers because many of their members had been practitioners of Chinese martial arts, also referred to in the west as Chinese Boxing. The uprising took place against a background that included severe drought and disruption caused by the growth of foreign spheres of influence in China.
As the Western powers and Japan organized a multinational force to crush the rebellion, the siege stretched into weeks, and the diplomats, their families and guards suffered through hunger and degrading conditions as they fought to keep the Boxers at bay.

Eight-Nation Alliance
​
Australia: So much for the eight-nation alliance. We have 9 represented in the image above, with Russians not even being in the picture. Wondering how many "unofficial" countries participated in thisevent.
On August 14, after fighting its way through northern China, an international force of approximately 20,000 troops from eight nations (Austria-Hungary, France, Germany, Italy, Japan, Russia, the United Kingdom and the United States) arrived to take Beijing and rescue the foreigners and Chinese Christians. 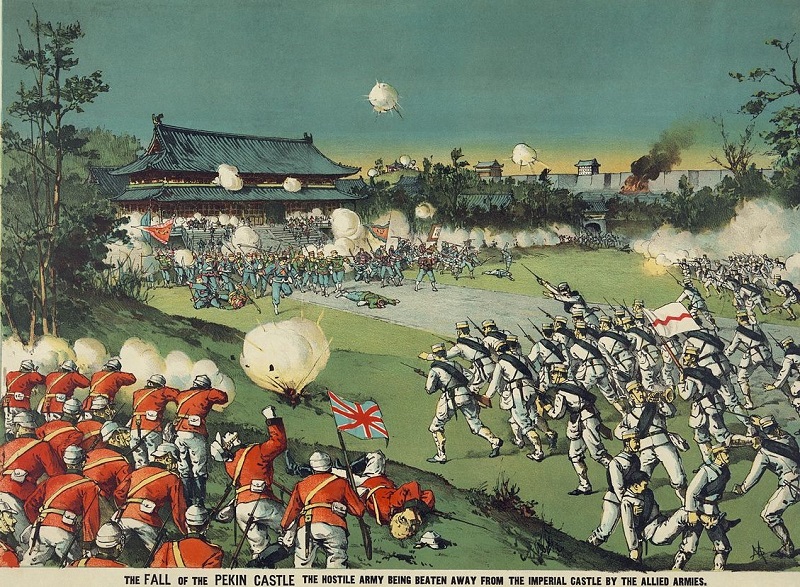 Tartar City​
American troops in the relief of Peking in China on 14 August 1900 during the Boxer Rebellion. During the fiercely opposed relief expedition to Peking in the Boxer Rebellion in 1900, when two companies of the U.S. Army's 14th Infantry Regiment were pinned by heavy fire from the east wall of the Tartar City and the Fox Tower between abutments of the Chinese City Wall near Tung Pien Gate, volunteers were called for to attempt the first perilous ascent of the wall. 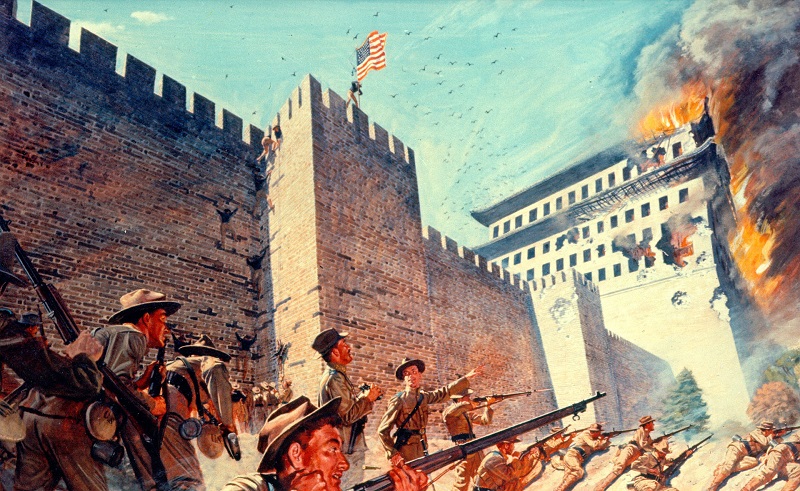 Boxer Rebellion: Aftermath​
The Eight-Nation Alliance, after being initially turned back, brought 20,000 armed troops to China, defeated the Imperial Army, and arrived at Peking on August 14, relieving the siege of the Legations.
The Boxer Rebellion formally ended with the signing of the Boxer Protocol on September 7, 1901. By terms of the agreement, forts protecting Beijing were to be destroyed, Boxer and Chinese government officials involved in the uprising were to be punished, foreign legations were permitted to station troops in Beijing for their defense, China was prohibited from importing arms for two years and it agreed to pay more than $330 million in reparations to the foreign nations involved.
Perhaps a total of up to 100,000 or more people died in the conflict, although estimates on casualties have varied widely. The great majority of those killed were civilians, including thousands of Chinese Christians and approximately 200 to 250 foreign nationals (mostly Christian missionaries).


The Executions​
One of the execution grounds was located at the crossroads of Xuanwumen Outer Street and Luomashi Street. The exact location is under debate today. However, contemporary sources and photographs put it across from an apothecary shop named He Nian Tang.
Famous people executed at Caishikou:

Executions Unmasked​
Obviously Wikipedia account is meant to be politically correct, and user friendly. In reality these executions are one of the most gruesome atrocities you will ever see. Just a mere thought of our so-called civilized countries participating in something like this makes me sick. But beyond that I want to know why. I do not believe for a second, that it was just a punishment. If anything, it looks like an eradication of species to me. As in they wanted to make a certain kind to go instinct.

This stuff is thick enough, that I am hesitant to post these photographs. So there is your spoiler. Look at your own risk. 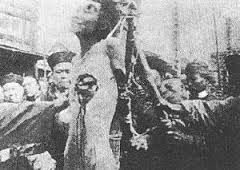 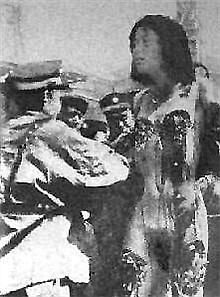 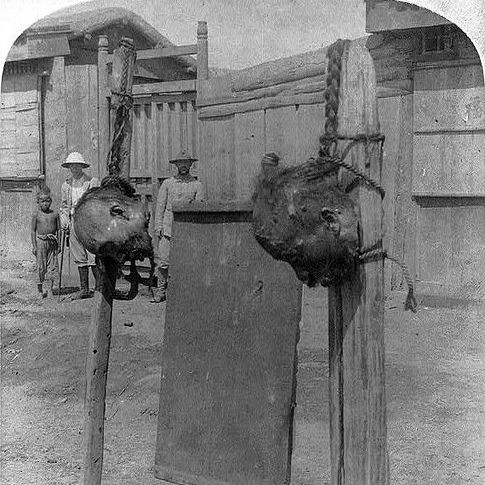 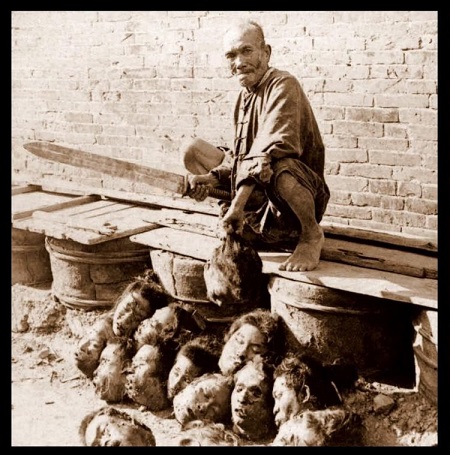 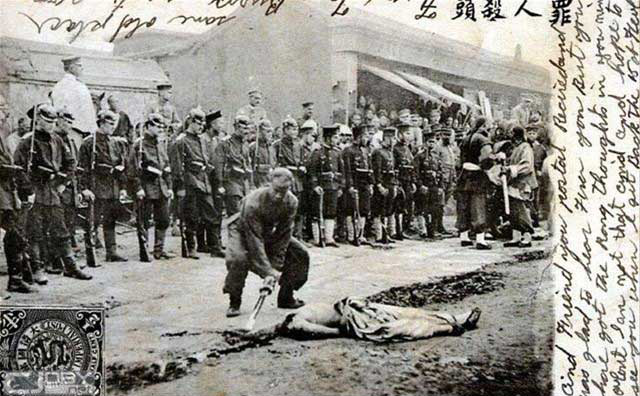 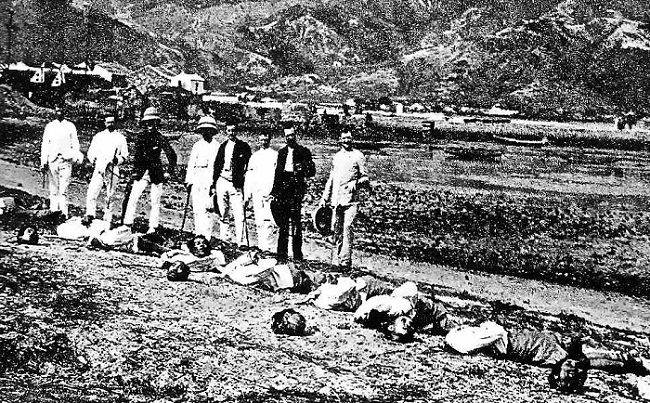 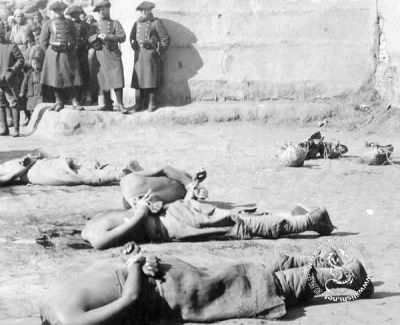 KD: For over a year Britain, United States, Australia, India, Russia, Netherlands, Belgium, Spain, Germany, France, Austria-Hungary, Italy and Japan were involved in combat in China. Some of them were taking "heavy fire from the east wall of the Tartar City".

I think the events of 1899-1901 were misrepresented to satisfy the narrative. Victors write and print our history books. There are three points I would like to make.

Point #1:
Point #2:
Point #3: The Tartar City
P.S. There could be another hypothetical possibility. Clone factory gone haywire, but this we will never find out.
Click to expand...

Marco Polo said that the Tartaros conquered the kingdoms of Cathay and Mangui, Mangui says it was the Ming dynasty. 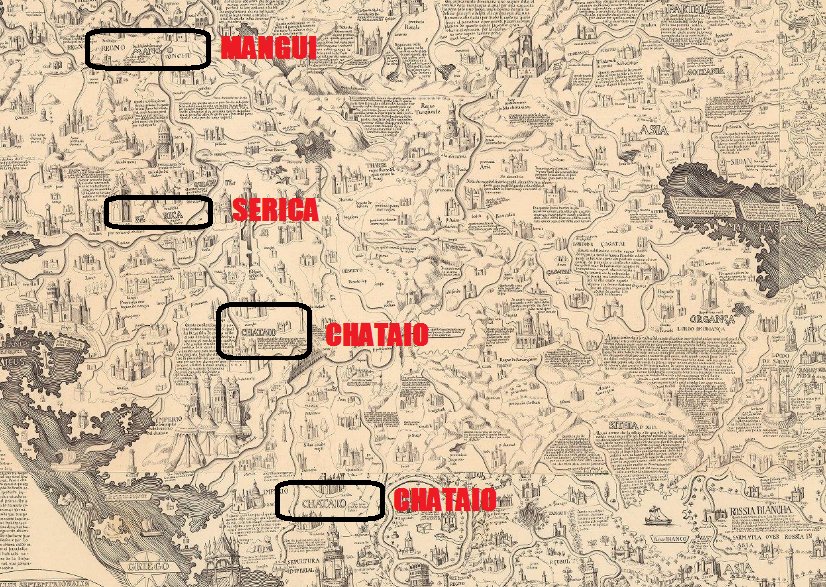 What relationship was there between the Cathars that Urbano Monte puts on his map and those of Cathay?

Or actually the Cathars were absorbed by the Tartar Mongols who by the way already ruled over China in the times of Marco Polo?

Historians rely on this when they try to explain why Marco Polo does not speak of the Wall of China.
I quote from this link Gran Canal de Venecia: 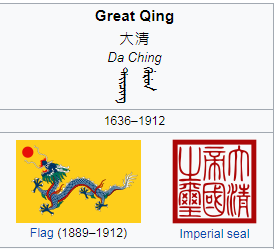 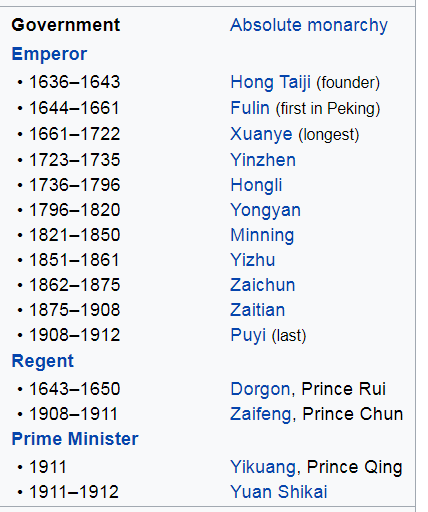 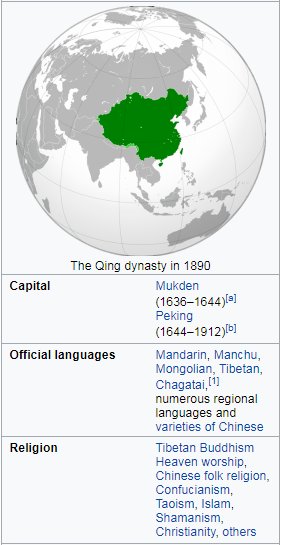 So the Kahn of Cathay in this picture from Marco Polo's book is the same Qing dynasty over China? 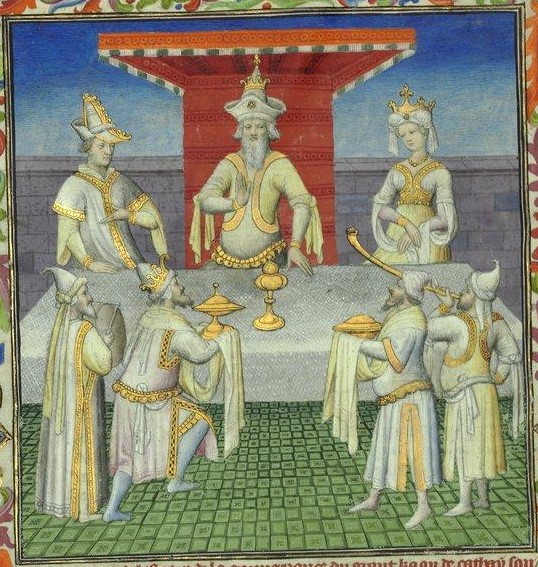 It is almost as if they roll out the same carpet every time...

John Thomson: "PEKING consists of two cities: one the Tartar or Manchu city, with the Imperial palace in its centre; the other, the Chinese, containing the altars of heaven and earth, where the State worship is carried on. The Tartar city is enclosed by massive walls, nearly in the form of a square, each side measuring about three miles and a-half. These walls are pierced with nine gates; three on the south side and two on each of the others. The Tartar city is supposed to contain nothing except the Imperial palace, the abodes of the nobles, and the barracks for the accommodation of the bannermen, already described, who form the body-guard of the Emperor.

HELLBOY said:
f Marco Polo started his journey in 1201, then the Tatars of 1200 with Kublai Kahn and the Tatars of the Qing dynasty could be one and the same
Click to expand...

I looks like it:
Manchu, Qing and Tatar are thus the same.
Only the Tatar- part seems lost from Wikipedia.

Dutch Wiki: "The Qing Empire was much more multi-ethnic than the Empire of any previous dynasty. There has also been a debate among Western historians as to whether the Manchu emperors saw their empire as a Chinese empire or as a Qing empire of which China was by far the most important but not the only component. The latter view has been vehemently contested by Chinese historians. The current People's Republic legitimizes current borders and claims to disputed territory based on developments during this dynasty. The Republic of China also did this between 1912 and 1949.

In order to rule an empire of that size, the Qing created new and more effective forms of government and communication. During the dynasty's heyday, from the late seventeenth to late eighteenth centuries, a level of production and prosperity was reached that was considerably higher than in any dynasty before. The average standard of living during the eighteenth century was probably higher in China than in Western Europe."

So we did not only in the western world had a "Golden age" in 17th century but in China too.
Sounds like someone gets envy here....
It's too big, too rich and too peaceful and too multi ethnic.
I've heard this before and that country ended up with Stalin.
O wait.

"The Taiping Heavenly Kingdom was an unrecognized oppositional state in China and Chinese Christian theocratic absolute monarchy from 1851 to 1864, supporting the overthrow of the Qing dynasty by Hong Xiuquan and his followers. The unsuccessful war it waged against the Qing is known as the Taiping Rebellion."

"After fighting the bloodiest civil war in world history, with 30 to 50 million dead, the established Qing government won decisively, although the outcome is considered a pyrrhic victory"

So basically it didn't work out good enough so they had to invent the Boxer Rebellion from the inside of the people.

During the Boxer Rebellion also the biggest and oldest Library containing thousands of books with ancient wisdom was set on fire by the boxing rebellions (what a surprise, always the libraries).

And the already heavily damaged in the opium wars, the biggest Palace in Asia with ancient artifacts and gardens was demolished for good.

Here is a long article about the role of the Sassoon family and also the British crown and the east Indian company in all this:

"The truth lies buried in the family line of David Sassoon, “The Rothschilds of the Far East,” and their monopoly over the opium trade. Britain won Hong Kong by launching the ‘Opium Wars’ to give the Sassoons exclusive rights to drug an entire nation."

It takes quite a harsh (but probably not surprising) stand but it's worth the read
I think.

The Aftermath can be read here and herehere and and as always suddenly heroic books appear.

I think it is very perculiar that they started to attack Christians and in the meanwhile the jews gained enormous wealth.
You must log in or register to reply here.
Similar articles