Before you start reading the below post, please recall those "mystery hums", or weird engine sounds coming from beneath the ground. I have never heard any, but apparently there was a whole bunch of people who did.
Well, may be a submarine equivalent of a subterranean vehicle is to blame. Sounds like science fiction? Sure does, but apparently at some point such a vehicle was (allegedly) able to travel under ground at up to 9 miles per hour. Have you ever heard about it? I definitely did not.

1976 Movie: At the Earth's Core​
Obviously, in line with everything else I posted on this forum, the main idea of this article is going to be aimed towards this technology being a left over from the previous civilization. The older the information, the harder it is to track it down. Below is what I was able to come up with. Please fill free to contribute with your own research.


Subterrene​
Wikipedia tells us, that Subterrene is a vehicle that travels underground (through solid rock/soil) much as a submarine travels underwater, either by mechanical drilling, or by melting its way forward. Subterrenes existed first in fiction as mechanical drillers, with real-world thermal designs and examples following in the second half of the 20th century.

Here they are:
1904: Pyotr Rasskazov Machine

​
The first underground self-propelled combat unit was designed by Pyotr Rasskazov, from Moscow, back in 1904. At the beginning of the First World War, his drawings were lost, only to emerge later, in Germany. In the early 1930s, the Soviet Union revived this idea. 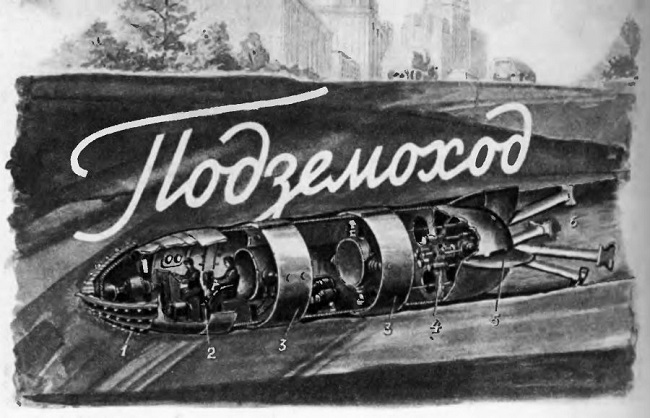 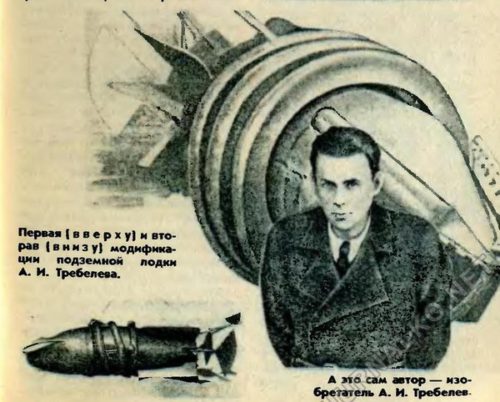 The below image is in Russian, so please use proper web services to get it translated. 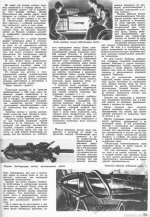 ​
Google Translated: It is worth noting that similar research and development was done in Nazi Germany. The leadership of the Third Reich needed any super-weapon that would help achieve world domination. According to information that was made public after the end of the war, underground military vehicles were developed in Germany, which were given the names "Subterrine" and "Midgardschlange". The last of these projects was intended as a super-amphibian, which could carry out movement not only on the ground and under the ground, but also under water at a depth of about a hundred meters. Thus, the device was created as a universal combat vehicle, consisting of a large number of interconnected compartments-modules. The module had a length of six meters, a width of about seven meters, and a height of about three and a half meters. The total length of the device was approximately 400-525 meters, depending on what tasks were set for this vehicle. Underground cruiser had a displacement of 60 thousand tons. According to some data, tests of the underground cruiser were carried out in 1939. On board it was placed a large number of small shells and mines, underground torpedoes "Fafnir", twin machine guns, reconnaissance shells "Alberich", transport shuttle "Laurin" for communication with the surface. The crew of the device left 30 people, and inside it was very similar to the device of the submarine. The device could reach ground speed up to 30 kilometers per hour, under water - three kilometers, and in stony ground - up to two kilometers per hour.
In addition, some sources mention another German project, less ambitious, but no less interesting, which was started much earlier - “Subterrine” or “Sea Lion”. A patent for its creation was received in 1933 and it was issued in the name of the German inventor Horner von Werner.

1950s: Mechanical Mole​
I am not sure which machine the below piece of information belongs to. Based on the description it matches 1930's Trebelev's machine. This info was published in 1956, so I will just leave it with this date. 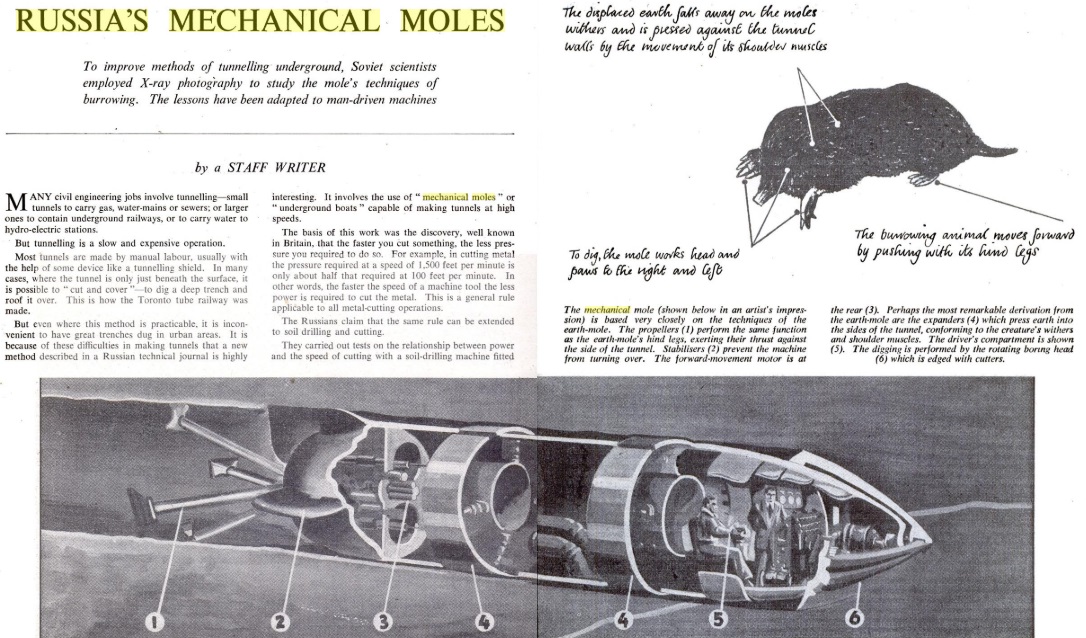 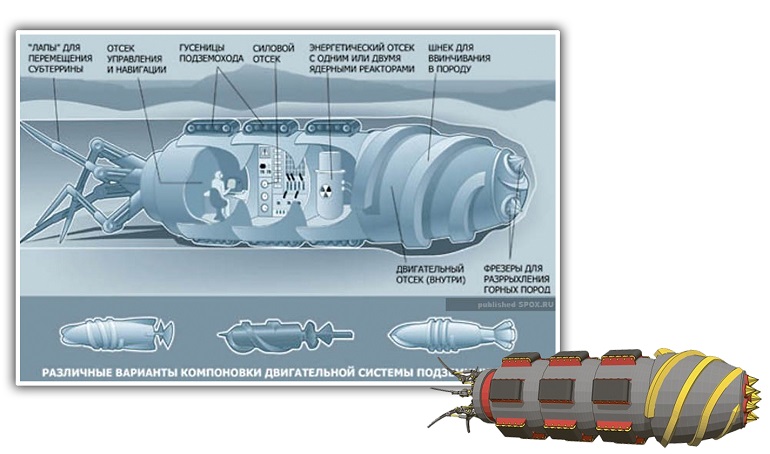 ​
The “Battle mole" project was more classified than even the Soviet nuclear project, and details about it remain sketchy. What is known, however, is that Nikita Khrushchev, who led the USSR through much of the ‘Cold War,’ actively supported the project. 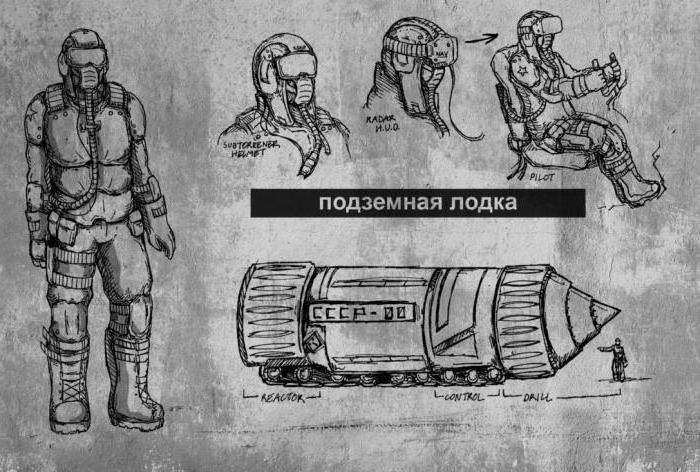 One of the most alarming missions planned for the Battle Mole was to send it off the California coast, where it would burrow into geologically unstable areas to plant nuclear charges that could be detonated to cause earthquakes, tsunamis, and other wildly destructive events.
Sources:
- The Soviets May Have Once Built A Secret Nuclear-Powered Land-Submarine To Attack America
- Khrushchev ordered ‘battle moles’ to blow up America
- How underground boats were created and tested
- The subterranean combat vehicle that never was
- Battle Mole, the secret subterrenes
- Who ruined "Mole"?
- Underground boats: secret development
- Project "Battle Mole"
- Subterrene - Wikipedia

KD: When I was working on the Tunnel Borrowing Machines article, I kept on running into some of the above images. Most of them lead to Russian sites. Based on the images it was fairly obvious what the purpose of these machines was. At the moment, I had no idea that the claimed underground speed would be 9 MPH. To be honest, I still doubt that such things are possible, but what do I know? Sure does sound far fetched, yet we have seen plenty of things which did not belong. Could such things be real back then? Can they be real today? I honestly do not know. At the same time if the above info has any merit, I will allow myself a few speculations:
Anyways, above are some of my thoughts. If you have any of your own, please share. Additionally, as you can see above, there are a few images I was unable to locate. If you run into any of those, please either upload, or post the link.
Click to expand...