Leonardo Da Vinci and his Micro-Brushes

Long overdue, but there it is. Apparently, the paintings done by Leonardo da Vinci cannot be faked by no artist of today. No matter how talented the artists of today are, not a single one of them is able to create a painting of the same quality. I am not even talking about making a copy of Mona Lisa here. None of the today's masters are capable of applying paint in a manner allegedly done by Mr. da Vinci.

No Brush Strokes aka Sfumato​
You have to give TPTB some credit. They are so good with making stuff up, it's almost impossible to catch them at it. In its approach, this Sfumato thing is a carbon copy of the Olber's Paradox. Obviously these are two totally different areas, but the instrument of BS production is the same. 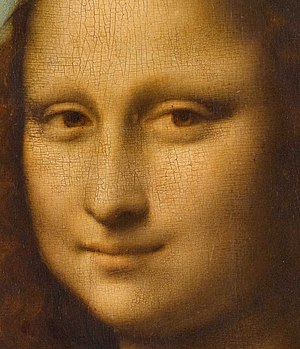 Anyways, what is Sfumato? Prepare for a load of baloney!

Sfumato Translated​
Without the descriptive layers of the above BS explanation, this "Sfumato" is just a magnificently creative way to cloud the readers judgement. The short and concise version of the above sounds like this - NO BRUSH STROKES CAN BE OBSERVED.

​
And while the above is a bit far-fetched, the paint application methods used by printers and sprayers are probably not far off, from what we see in these Sfumato paintings. Of course, TPTB can not say that there are no brush strokes. Therefore they had to introduce the following:
So there we have it: miniscule 1/40th of a millimeter brush strokes, magnifying glass and 30 coats of paint.

How Small Is One Micrometer?​
The smallest particles we can see with our eyes are those that are larger than 50 micrometers, such as the larger specks of dust collected on our furniture. To give you an idea of how small micrometer-sized particles are, waste matter from dust mites is about 5 micrometers in size, while a strand of hair is about 100 to 150 micrometers wide. 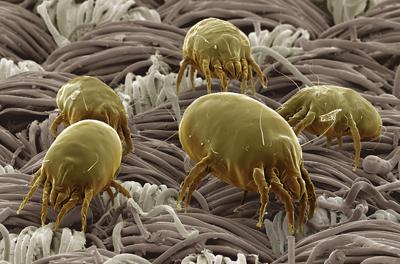 By the way, did you know a single dust mite produces about 20 waste droppings each day? For us it means the below:

Paint Layers​
How did Leonardo Da Vinci manage to paint such perfect faces? For the first time a quantitative chemical analysis has been done on seven paintings from the Louvre Museum (including the Mona Lisa) without extracting any samples. 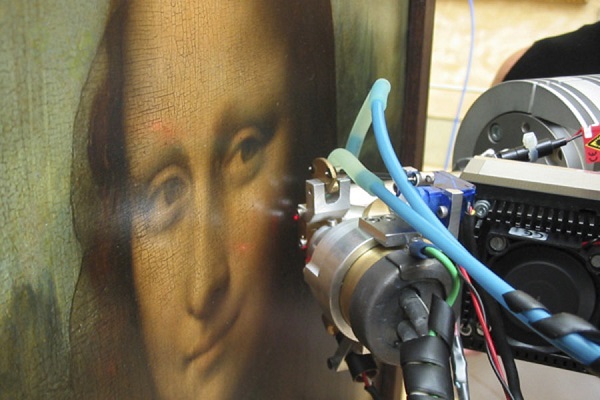 ​
Specialists from the Center for Research and Restoration of the Museums of France found that da Vinci painted up to 30 layers of paint on his works to meet his standards of subtlety. Added up, all the layers are less than 40 micrometers, or about half the thickness of a human hair.

This is an extreme closeup scan of a paint chip retrieved from the ruins of Belmont Art Park. The fragment is about 10 millimeters thick, and appears to consist of about 150-200 layers of paint. 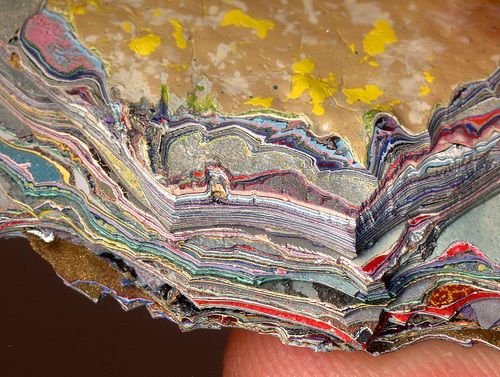 Mortars & Pestles​
Leonardo da Vinci typically painted with oil paint that he made by hand from ground pigments; later in his career, he worked with tempera made from egg whites. There it says it - "oil paint made by hand". What did they use in between 1452 and 1519 to grind things? Yup, they used mortars and pestles. Let's google image search for those 16th century mortar and pestles. We end up with something like this. 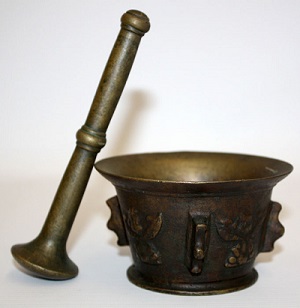 ​
Oil paints are made up of pigment that has been ground into an oil base, called the vehicle or binder. The most commonly used vehicle is cold-pressed linseed oil, however, it can be made with walnut oil, poppy seed oil, safflower oil or other less popular oils. 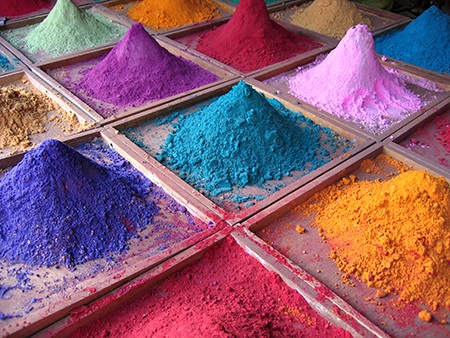 In other words, to achieve a layer sickness of 1.33 micrometers, not a single particle can be larger that these 1.33 micrometers. Let us see what 21st century automated grinding machine can offer.


MP-1000 Mortar & Pestle Grinder​
The MP-1000 is an automatic mortar & pestle grinder that is used to grind and homogenize a wide range of samples in a dry or wet state. It is highly effective for samples that are oily or pasty and offers good flexibility with respect to batch size, accommodating small or large sample quantities. The MP-1000 is especially well suited for applications with temperature sensitive samples, as it generates very little heat. 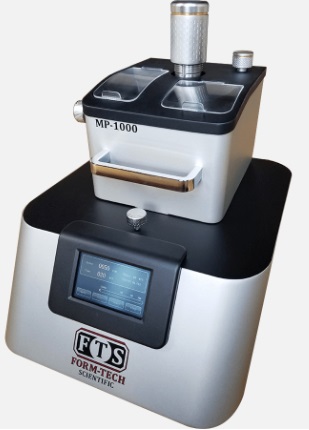 ​
Pretty sure it could be possible to grind random pigment particles to a pretty small size, but to suggest that every single one of those would be under the required standard... highly questionable to say the least. Imho, it's just impossible with hand tools and whatever other tools traditionally available in the early 1600s.

KD: Remember, the technique was first invented by the Primitive Flemish school, and it was used by quite a few artists of the same generation. TPTB can label stuff all day long with catchy things like "Primitive Flemish" and "Sfumato". I think it is fairly obvious, that certain things are impossible to create by hand and eyesight only. It appears that we are talking about the lost technology here, which has nothing to do with micro-brushes, and minuscule strokes.

Well this is a bit spooky, the resemblance of these pics to the A I "translations" of these types of images is something that maybe needs a bit of discussion!

Also might explain why these "paintings" or "brush strokes" can't be replicated, because they are not!

Good stuff KD, this is how I addressed this issue in my book The Obfuscation of Photography.

I cannot verify the likeness to a photograph of the work of Da Vinci as I have not seen one with my own eyes, but from the descriptions of a Sfumato painting, which I have read, both aesthetically and technically, I believe people are describing a photograph, similar to those of a traditional paper photographs in appearance and chemical composition.

It further occurs to me, that perhaps this ‘use of colour’ is the very same process employed by della Porta in his works Natural Magic. Della Porta explains a process of ‘painting’, which you can utilise if you ‘only know how to take the colours’ but do not have the skill to paint (della Porta 1558). This leads me to consider; is Sfumato a lost art, or a hidden photographic process? The process caused by a soft focusing lens purposely causes the softening of light falling on the image. To me, this is how this Sfumato appears. The mirror camera I re - invented also causes the same effect.

If this was a technique used and ‘invented’ by Da Vinci, surely this technique and word for it would have appeared somewhere in literature prior to 1800? Further, Sfumato is only a theoretical idea. The process of which some believe they have uncovered the secrets of its contents and construction (Elias et al 2008)

However, if no artist alive is able to reproduce this style of creation, how then, can we believe in Da Vinci’s Sfumato technique? It seems to me, that this is another one of those ‘lost techniques ‘that the art world claims to know all about, yet humans have simply ‘forgotten’ how to achieve them. It becomes very convenient for art historians to postulate techniques and ideas yet to present zero poof of their existence.

I postulate that Sfumato is likely to be unachievable today, because in reality it was never a ‘painting’ technique to begin with. I would suggest the translation of Sfumato as; Italian language and is derived from fumo ("smoke", "fume") (Esaak, 2019). Sfumato translated into English means soft, vague or blurred (Linguee 2020). In my mind, the word Sfumato could be construed as meaning to hide, obscure, a smoke screen to hide the truth.

I further suggest the word was invented much later than Da Vinci’s lifetime, as a means to obfuscate the truth of the process, in that Da Vinci was in fact creating photographs, not paintings. Perhaps, during this time, other artists and chemists were coming close to discovering this secret, and had to be deterred from making it a popular, easy to repeat process of ‘real’ image making. This ‘Sfumato’ process attributed to Da Vinci et al, certainly, in my opinion, provides further irrefutable evidence of photographic capabilities in the fifteenth century.

In short, I believe, 19th Century art historians, invented the impossible technique and the term of ‘Sfumato’ to disguise a known photographic process.

When one searches for the direct translation of "Sfumato" via google translate and duck duck go's translator, sfumato translates as "vanished." This was the same translation that was provided to me in my younger years during my art history classes. I was told, and believed at the time, that they were referring to the "vanishing" of the brush strokes through the technique. I now believe that this could be a direct disclosure letting us know this was done with a "vanished" technology. TPTB like to dangle the truth in front of our eyes and assume we will never see it.
You must log in or register to reply here.
Similar articles