This is something I wanted to get to for the longest. Alexander the Great is one of the most prominent historical figures attributed to the Age of Antiquity. The achievements attributed to Alexander are truly amazing. I would like to apologize beforehand, in case he really did all those things, for I have my reasons to doubt most of them. As a matter of fact I will go as far as saying that the narrative has to be extensively scrutinized, because one too many facts simply do not make sense. Others do not check out during the available "narrative compliant" research.
A few known bio facts come first:
Due to the received education, we all have an idea of what Alexander looked like, when he lived and what closing he used. Today, in 2019, close to 2,500 years after Alexander died, we think that we can rely on all the movies, books and historical works. Why wouldn't we think that we know the most important details of Alexander's life? After all, there are numerous surviving ancient Greek and Latin sources on Alexander the Great. We have five main surviving accounts allegedly written by Arrian, Plutarch, Diodorus Siculus, Quintus Curtius Rufus, and Justin. There are a few additional ones of lesser importance.

With the above said, we have an interesting dilemma on our hands. People who lived in the 15th century had a much different perception, and in their opinion, Alexander looked like this. 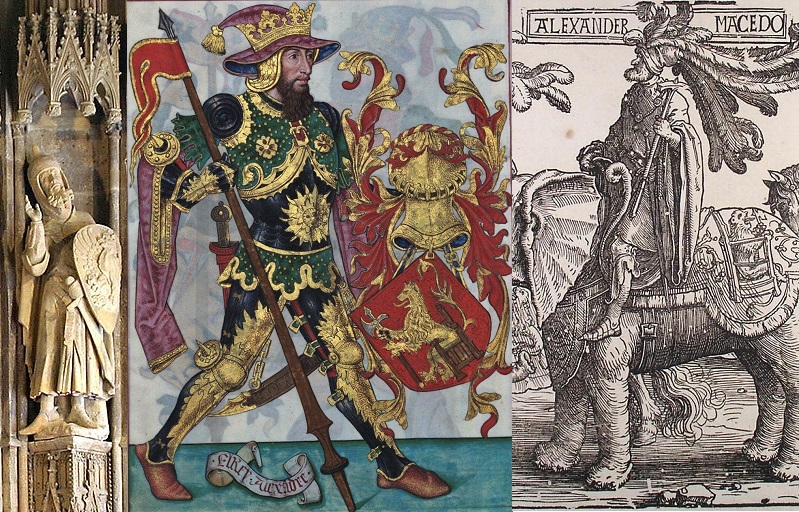 Source
​
For the purposes of this discussion, please avoid discussing Julius Caesar and Hector. It was impossible to cut them out without damaging Alexander's name. To get all the related links, and sources, please visit the below article: 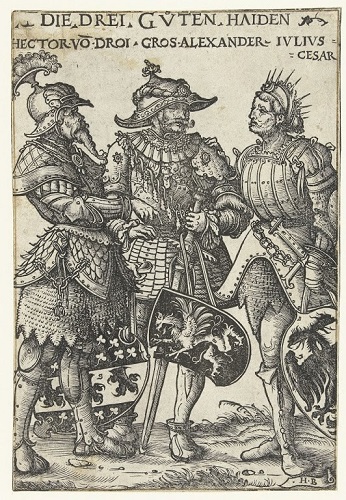 ​
Around 1430s AD, artists depicted Alexander as a medieval character, and there are no ifs, ands, or buts about it. But how is it possible, for we have Arrian, Plutarch, Diodorus Siculus, Quintus Curtius Rufus, Justin and co. Here is "Catch 22" as far as these sources go. Nobody knew about these sources until 1418. Some of the blog members know of what I'm talking about here. For the newer members, or for wondering Googlers I will say this:
Our historians can date things to whatever time they want, yet, nothing was known prior to 1418. I am not going to do anyone's homework, but will provide a place to start:
NOTE: In the right column, where you see 12-13, 15, and 15, we have the time the document was dated to by historians, and not the time when the document was allegedly created. Remember, that nothing was located prior to 1418.

VERIFY ME: You are welcome to check, and double-check me on this. In the process you might run into information in support of the following related topics. See for yourself when the so-called sources were discovered. If this 1,500 - 2,000 year break will not get your senses up, I cannot help you. It would mean that the dark "narrative" force runs strong within you.
KD: In my opinion, in the early 15th century, people had a much better understanding of the time they lived in. And if they chose to depict Alexander of Macedon as a medieval character, they had a reason for it. What is more important, they had the knowledge.
Eventually, after all the "historical" metamorphosis, Alexander the Great started to look like the below statue. This particular piece was "dated" with 2nd century BC, and is being kept at the Archaeological Museum in Istanbul, Turkey. 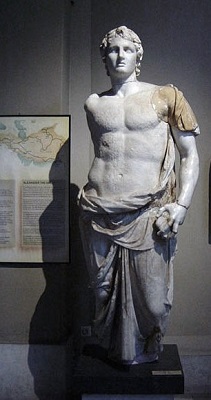 Persian Campaign
Battle of Gaugamela​
To demonstrate the ridiculousness of several key aspects of the official history, I will use only one event: the Battle of Gaugameta. For the purposes of clear understanding of the narrative, I strongly encourage you to watch the below video. It is an easy to watch, and a somewhat entertaining piece of pseudo history.

The Battle of Gaugamela, was the decisive battle of Alexander the Great's invasion of the Persian Achaemenid Empire. In 331 BC Alexander's army of the Hellenic League met the Persian army of Darius III near Gaugamela, close to the modern city of Dohuk in Iraqi Kurdistan. Though heavily outnumbered, Alexander emerged victorious due to his army's superior tactics and his deft employment of light infantry. It was a decisive victory for the Hellenic League and led to the fall of the Achaemenid Empire. 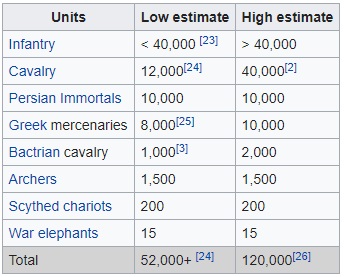 ​
Casualties: Alexander on the left, Darius III on the right 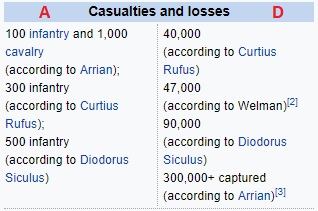 Source
​
KD: I do not know what they smoked when they created this disposition. Funny how conveniently our historians dismissed their "ancient" sources, and made Darius's forces 10 times smaller.

The sarissa (+ source) was a long spear or pike about 4–6 metres (13/18–20/22 ft) in length. It was introduced by Philip II of Macedon and was used in his Macedonian phalanxes as a replacement for the earlier dory, which was considerably shorter. These longer spears improved the strength of the phalanx by extending the rows of overlapping weapons projecting towards the enemy, and the word remained in use throughout the Byzantine years to sometimes describe the long spears of their own infantry. 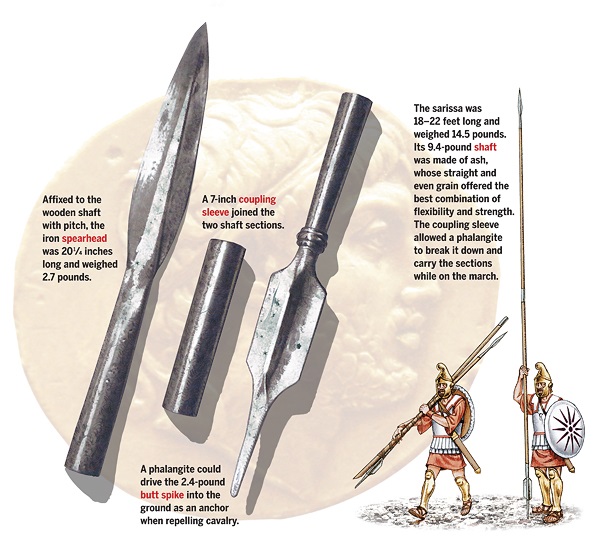 
Sorry, could not help it 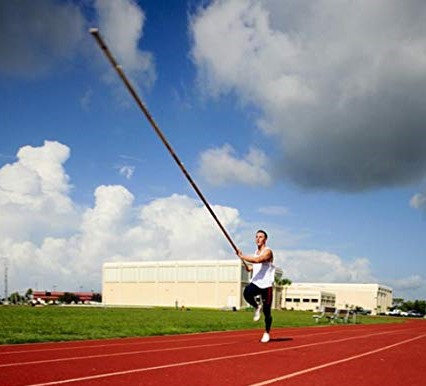 Vaulting Pole max length: 17 ft 5 in​
Jeff Hartwig, who set two North American pole vaulting records in 1998, was a member of the U.S. Olympic team in 1996 and 2008.
DEAR HISTORIAN: Before you come up with such a wonderful weapon, please go to your nearest sports club. Duct tape two 2.5 lbs dumbbells to each end of the vaulting pole, hold one end of it, and walk 100 meters thrusting this device forward once every 10 meters. Come back, and let me know how that worked out for you. I am not even asking you to wear/carry the following:

Macedonian Phalanx​
The phalanx consisted of a line-up of several battalion blocks called syntagmata, each of its 16 files (lochoi) numbering 16 men, for a total of 256 in each unit. Each syntagma was commanded by a syntagmatarch, who - together with his subordinate officers - would form the first row of each block. For visual representation of how the phalanx was supposed to work please refer to this video. 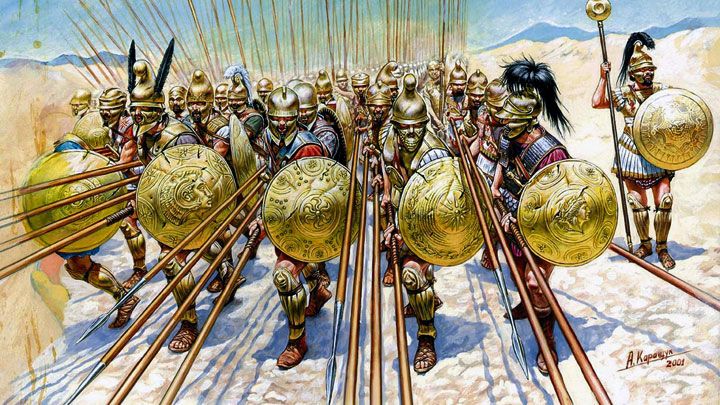 ​
PRACTICAL EXERCISE: I wanted to offer our fellow historians to recreate this Macedonian Phalanx attack formation. Make 256 enemy straw men similar to the one below. 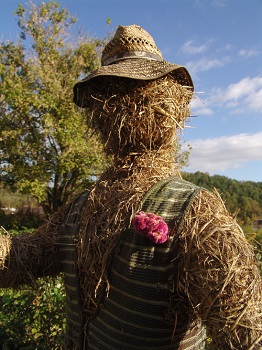 Position your enemy straw men behind Darius III's back, similar to the image below.

Make up a your Macedonian Phalanx 16x16 formation, for the total of 256 Sarissa bearing historians. Attack the stationary straw men enemies.


Horseshoes​
The purpose of horseshoes is to help prevent excessive wear and tear and hoof breakage. Most people are familiar with curved metal horseshoes that are fitted onto a horse's hoof with nails. The nails are driven through the hard part of the hoof, and this process does not hurt the horse. 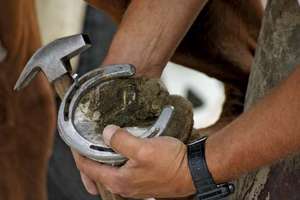 I'm not sure how many thousands of miles the below red arrows amount to, but Macedonians definitely needed horseshoes for their horses.

​
Unfortunately horseshoes were not invented until 500 AD, more than 700 years after this tale. But charioteers, cavalrymen, and traders were well aware that their horses needed hoof protection on paved roads and rough rocky ground. The hoof of a horse is made of keratin, the same stuff that composes hair and toenails. It wears down quickly on rough ground, and a horse without protection will quickly go lame.

The necessity of protecting the horse hoof was recognised by the ancient Greeks and Romans. An early form of hoof protection was seen in ancient Asia, where horses' hooves were wrapped in rawhide, leather or other materials for both therapeutic purposes and protection from wear. Elsewhere, various methods were employed to trim the hoof into a hollow form and give it as much hardness as possible. Gradually, protection items started to appear, first with the soleae Sparteae, a sort of leather hoof boot, later improved into the soleae ferreae that featured metal studded soles similar to contemporary military boots

The ancient Romans made more improvements, creating the official hipposandal or Soleae Ferreae made of forged iron, but still attached to the hoof with straps wrapped around the horse’s hoof and pastern. But evidence for this improvement does not appear until the 1st century AD, 350 years after the events in this article.

UNFORTUNATELY: In 2006, Channel Four's history programme Time Team featured an episode where hipposandals were recreated and tested; however, they were reported to have been uncomfortable and unsuitable for long journeys.

I was unable to locate any durability information, but let us say that a set of leather hipposandals lasts two weeks, which is probably too generous. Alexander had 7,000 horses. Considering 13 years of campaigning, Alexander's horses would need 8,736,000 hipposandals alone. You tell me if it sounds realistic.

KD: Anyways, its getting late, and I have more to add, but at a later date.

In my opinion, things do not add up big time. I am not saying that Alexander did not exist. I think he did, but not within the narrative provided by the official historians. I think he lived during the Medieval Period, and did not run around with bare legs with an army of sandals wearing poll vaulters. And if this Sarissa thrusting phalanx did not exist, than the entire story line is bogus.
Click to expand...

Did you catch the size of Alexander on the elephant? Either they bred tiny elephants, or he was of heroic stature. A giant.
You must log in or register to reply here.
Similar articles