Wolfgang Amadeus Mozart - anything strange there?

At the age of four he could learn a piece of music in half an hour. At five he was playing the clavier incredibly well. At six he began composing, writing his first symphonies at the age of eight. He was constantly traveling all over Europe with his father, Leopold Mozart. The musical feats and tricks of young Wolfgang were exhibited to the courts (beginning in Munich in 1762), to musical academicians, and to the public. Between the ages of seven and fifteen, the young Mozart spent half of his time on tours. 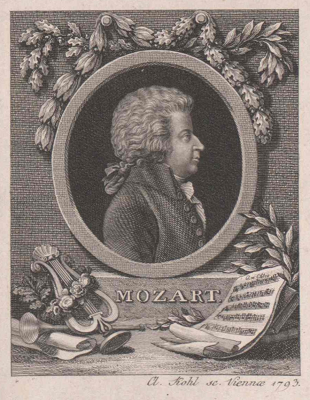 1756 - 1791
​
He composed masterfully in every musical format: Operas, choral works, concertos, symphonies, chamber music, solo songs, sonatas… Mozart was one of the few composers in history to compose masterworks in every conceivable musical genre. Though his output is highly varied, each piece exudes a bold, self-assured confidence and that is instantly recognizable. He wrote solo works (sonatas and concertos) for nearly every instrument of his time. All are considered cornerstones of each instrument’s repertoire – and when he features two solo instruments with orchestra at once, the magic increases exponentially.

He was a melodic genius: Mozart had a knack for churning out memorable melodies nonstop. Check out the performance of the Sinfonia Concertante in E-flat above – how many sing-able melodies do you hear in the space of just the first five minutes? Some of these have gone down as some of the most beautiful of all time, such as the breathtaking Adagio from his Clarinet Concerto. Many of his contemporaries wrote wonderful tunes as well, but one of the secrets to the uniqueness of Mozart’s music is how he was able to vary his melodies, transforming them in fascinating ways.


What do we have?​
Could there be more to the story of Mozart than meets the eye? With his music being so obviously ahead of its time, could there be reasons outside of the traditionally accepted "he was a genius"? Where could his music come from?