Ran into this 1877 ship designed by a certain M. Donato Tomassi. It does not sound like this ship was ever made, but then again, do we really know? Here is a short description of this 19th century wonder.

The novel form of vessel, to which the above odd name has been given by its inventor, M. Donato Tommasi, of Paris, France, is a combination of a boat wholly submerged with a raft: a connecting link, to borrow the naturalist's expression, between the submerged torpedo boat and the monitor. The advantages which are expected to be realized from this hybrid craft, the inventor describes as follows: "It is evident that a vessel, plunged several yards below the surface of the sea, is no longer influenced by wind or wave. Let the sea be agitated, let there be the most violent tempest, yet the boat which navigates under water will never be wrecked, for the same reason that a fish cannot be drowned. 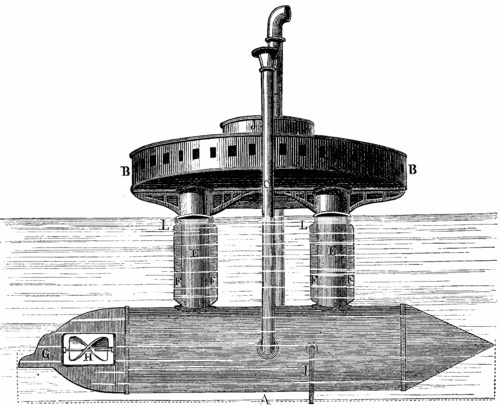 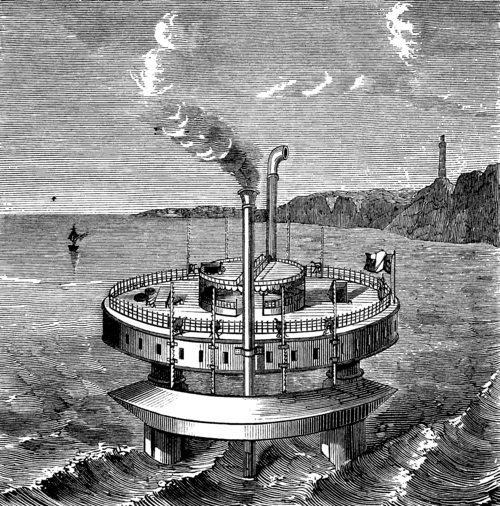 ​
On each side of the platform, B, which is of elliptical figure, is a large float, seen in Fig. 3, which, by means of racks and gearing, may be raised or lowered at will. Usually these floats are carried at a height of a yard above the water. In calm weather, this distance is increased, and in storms it is diminished, the object of the floats being to keep the whole vessel on an even plane, and to prevent too violent oscillations. In order to facilitate navigation in shallow water, the columns, E, may be made telescopic, and operated by hydraulic apparatus, so that they may be shortened at will. Any form of engine or propeller may be used.

Besides the advantage of the vessel being unaffected by waves, since its submerged portion travels far below them, the inventor claims that it will meet less resistance from the water than would a vessel of corresponding volume sailing on the surface. It will make faster progress, because it has no waves to mount and descend; and hence it always travels in a nearly right line. The screw being submerged at a great depth will not tend to turn the vessel from her straight path. The platform being easily detachable may serve as a raft in case of injury to the submarine boat. For fast travel, on lakes, rivers, and shallow water generally, M. Tommasi proposes to support his platform on two floats which rest on the surface of the water. No weight, therefore, is thrown on the submarine vessel, which need be constructed with only just enough buoyancy to sustain itself and its engine. In this way, the upper craft has no engine or other load than its cargo; and as it merely rests upon the surface, the inventor thinks that it will skim over the same like an ice boat on ice.

In War: For war purposes, the hemi-plunger is especially adapted, because the vulnerable portions, engines, boiler, rudder, etc., are wholly out of the reach of shot. Guns are mounted on the platform, which thus becomes a circular or elliptical turret, just above the water when the vessel is in fighting trim. Instead of steel armor, M. Tommasi has a new invention which he calls hydro-metallic plating. He reserves the details of this for future publication; but generally the armor consists of tubes in which liquid is forced under a pressure equivalent to the resistance, say, of forged steel. He thinks this will oppose shot as effectually as the solid metal, and will have the additional advantage of superior lightness.

KD: What do we really have here? Are we supposed to believe that some unknown dude named Donato Tomassi, single-handedly designed a merchandise transporting submarine with a detachable platform? The one that can be easily turned into a warship? In 1877?

​
Further Googling showed that he was possibly an electrician and a civil engineer. It's all in French. Here is a couple of links and a portion of google-translated text:
Additionally we could say that Donato Tommassi studied magnetism. OK, so the guy appears to have existed and was smart, but could he design a ship like this?

Anyways, for the time being I'm maintaining my opinion that they were trying to re-create the inherited tech of the previous spin of civilization. May be this guy was one of the survivors, I do not know.

These are my thoughts. What are yours? Do you think they got to building an actual ship?
Click to expand...