Jumping ahead I will say this. It appears (to me, at least) that de Paula del Villar, and the great Gaudi were simply trying to finish (in 1882) the construction project initiated by someone else. Today, in 2019 the Basílica is still under construction.

Additional Photographs​
The Basílica i Temple Expiatori de la Sagrada Família is a large unfinished Roman Catholic church in Barcelona, designed by Catalan architect Antoni Gaudí (originally Francisco de Paula del Villar was commissioned for the job, but he quit). Gaudí's work on the building is part of a UNESCO World Heritage Site, and in November 2010 Pope Benedict XVI consecrated and proclaimed it a minor basilica, as distinct from a cathedral, which must be the seat of a bishop. 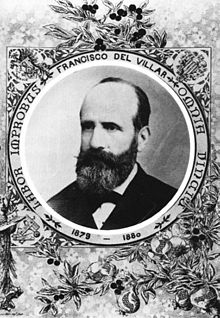 1828-1901
​
We are not really interested in this guy, for he barely participated in the entire Sagrada Família saga. Villar studied architecture in Madrid at the Academia de Bellas Artes de San Fernando, and qualified in 1852.
In 1877 he was commissioned by the Associació de Devots de Sant Josep to build the church of the Sagrada Família. Villar planned a Neo-Gothic design, of which only the crypt was built. He abandoned the project in 1883 as a result of disagreements with Joan Martorell, the architect advising Josep Maria Bocabella, president of the Associació de Devots de Sant Josep and promoter of the project. The job was offered to Martorell, who turned it down, and instead recommended Antoni Gaudi. Gaudi then took charge of the project and made it into his masterpiece. 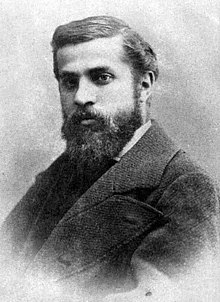 1852-1926
​
Antoni Gaudí i Cornet was a Spanish architect known as the greatest exponent of Catalan Modernism. Gaudí's works have a highly individualized, and one-of-a-kind style. Most are located in Barcelona, including his main work, the church of the Sagrada Família.
Between 1875 and 1878, Gaudí completed his compulsory military service in the infantry regiment in Barcelona as a Military Administrator.

Gaudí: End of Life & Death​
Gaudí left hardly any written documents, apart from technical reports of his works required by official authorities, some letters to friends (particularly to Joan Maragall) and a few journal articles. Some quotes collected by his assistants and disciples have been preserved. The only written document Gaudí left is known as the Manuscrito de Reus (Reus Manuscript) (1873–1878), a kind of student diary in which he collected diverse impressions of architecture and decorating, putting forward his ideas on the subject. Included are an analysis of the Christian church and of his ancestral home, as well as a text about ornamentation and comments on the design of a desk.

On 7 June 1926, Gaudí was taking his daily walk to the Sant Felip Neri church for his habitual prayer and confession. While walking between Girona and Bailén streets, he was struck by a passing number 30 tram and lost consciousness. Assumed to be a beggar because of his lack of identity documents and shabby clothing, the unconscious Gaudí did not receive immediate aid. Eventually some passers-by transported him in a taxi to the Santa Creu Hospital, where he received rudimentary care. 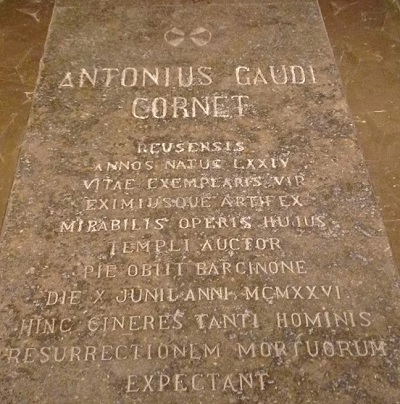 ​
His gravestone bears this inscription:

Basílica i Temple Expiatori
de la Sagrada Família​
In 1882, construction of Sagrada Família started under architect Francisco de Paula del Villar. In 1883, when Villar resigned, Gaudí took over as chief architect, transforming the project with his architectural and engineering style, combining Gothic and curvilinear Art Nouveau forms. Gaudí devoted the remainder of his life to the project, and he is buried in the crypt. At the time of his death at age 73 in 1926, when he was run down by a tram, less than a quarter of the project was complete. 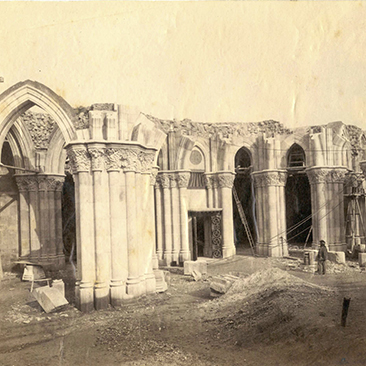 1887​
Now, this is supposed to be the "construction" of the crypt. Granted, a crypt is a stone chamber beneath the floor of a church, cathedral or other building. It typically contains coffins, sarcophagi, religious relics, or whatever. But does it look like a brand new construction? 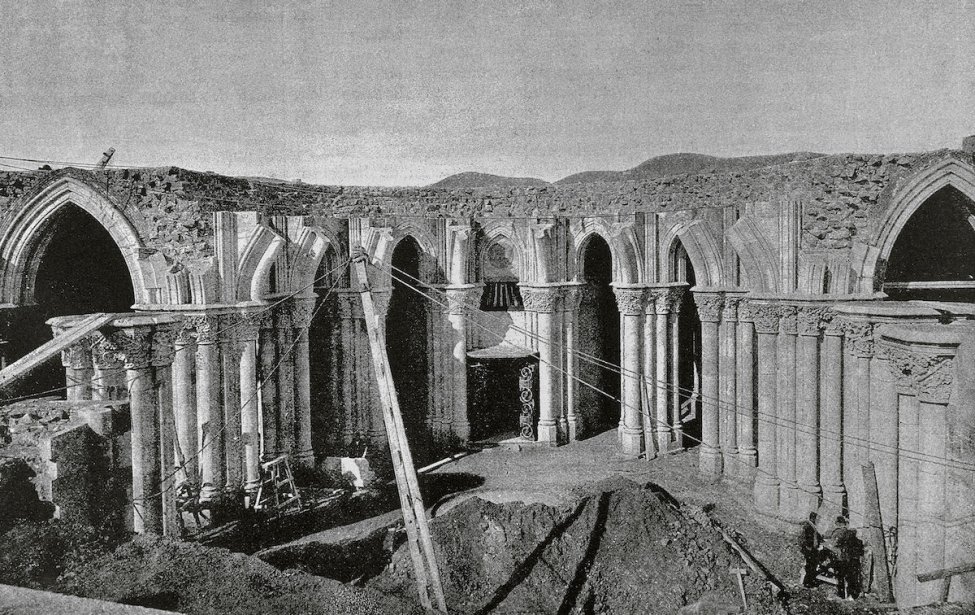 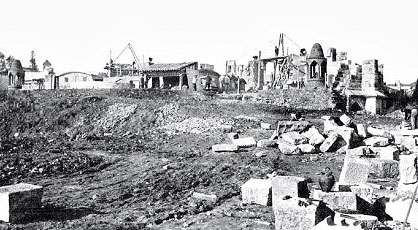 1892​
The apse of the Sagrada Familia in 1892. The work had begun 11 years earlier for the crypt located under this apse. In 1892, a year before the photo, begin to build the foundations for the facade of the Birth. 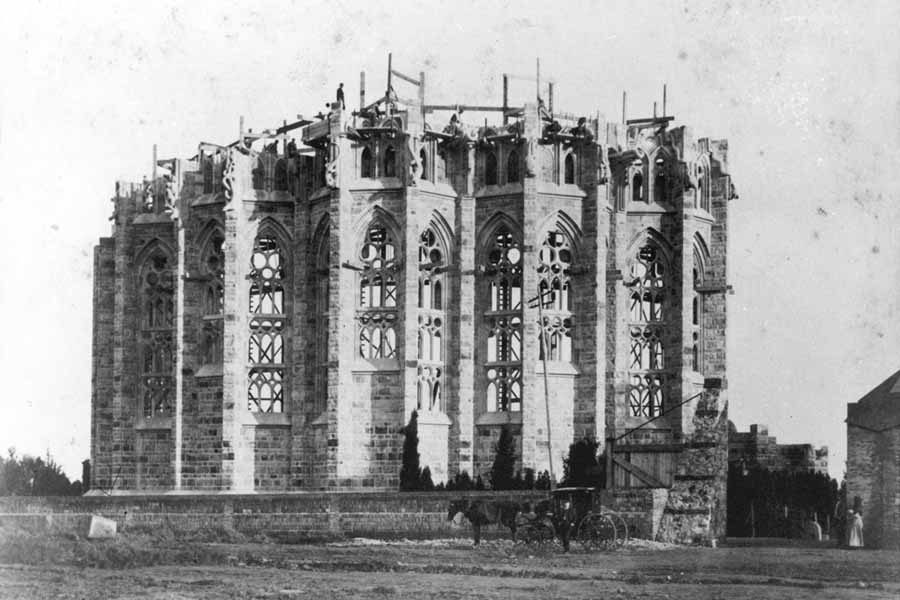 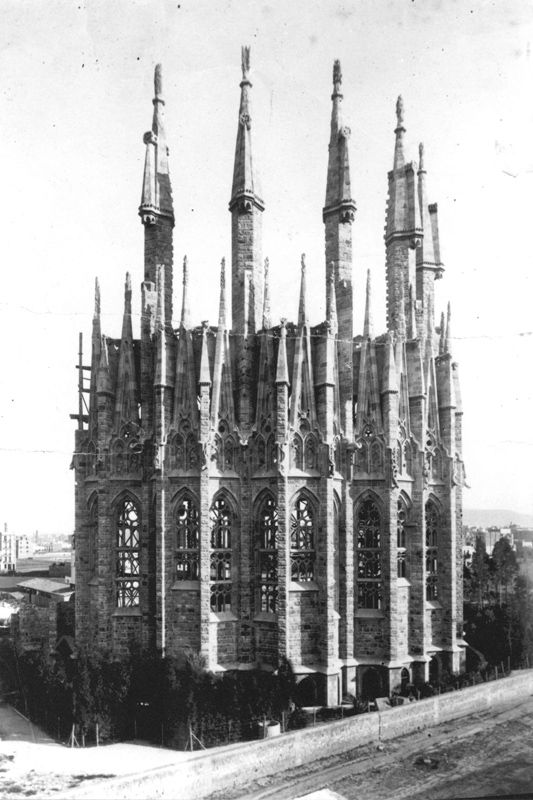 1896
Portrait of soldiers in front of the Sagrada Familia (1896), photograph by Pau Audouard 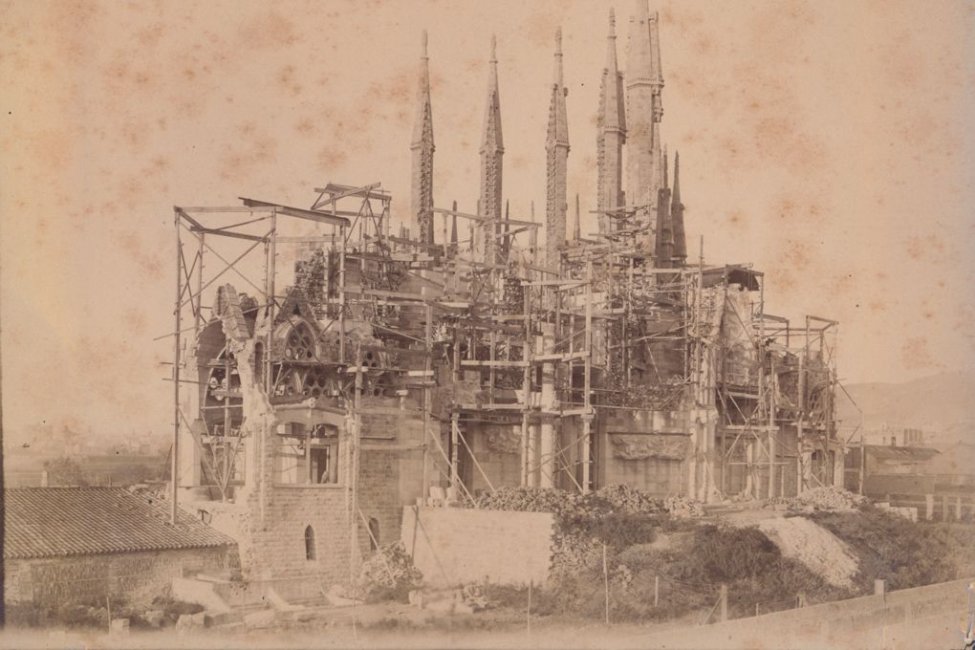 1898​
Quite a few sources list the below photograph as the one reflecting the state of the Basilica in 1898. That would be 16 years after the construction was started. 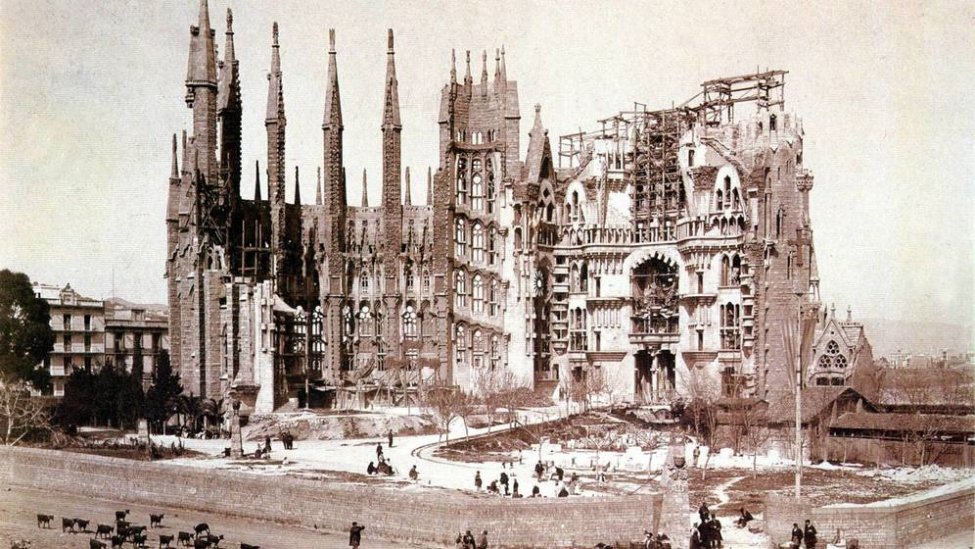 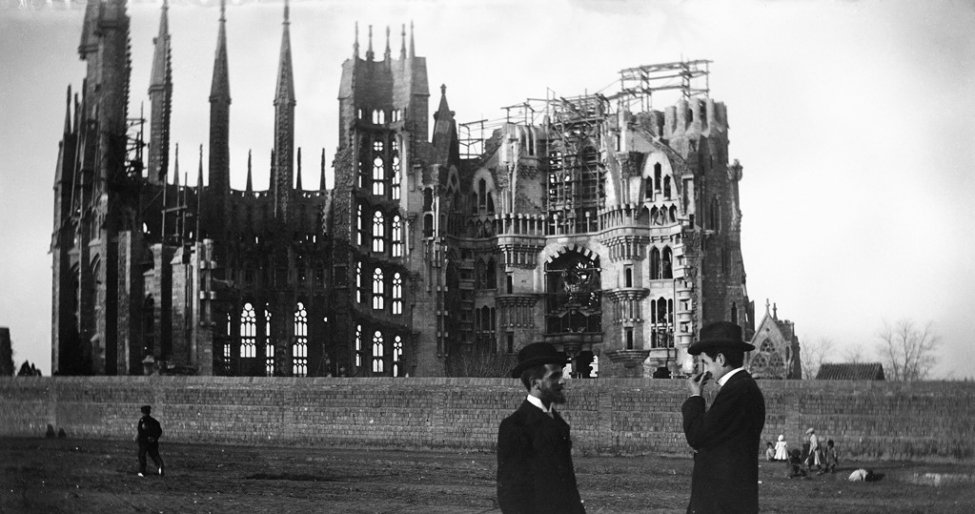 Just figured I would add this cathedral to the list of the ones we already have. This is clearly one amazing piece of architecture. 144 years to complete the construction is a long time, especially considering today's technological capabilities. 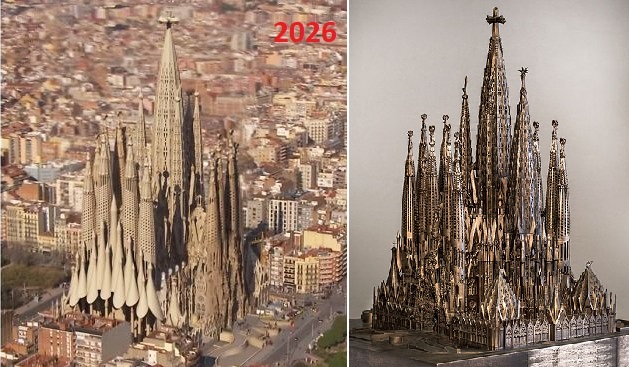 I guess, one of the problems I have with this structure, is its progression from 1882 to 1889, and from 1889 to 1893. It appears that nothing major was constructed from 1882 to 1889. Than all over sudden within the next four years the building grew exponentially. After 1893 the construction slowed, and continued at a snail pace through present times.

​
The other issue of mine is the aged appearance of this building in any of the above 19th century construction photographs. It just does not look new to me. I am not quite sure where the actual construction process is. It looks like that materials just arrive on their own.

The 1896 photograph (above) has that small barn which kind of does not belong. It appears way to permanent of a structure for our elaborate Goudi to include it in its project. As a matter of fact, when you consider Gaudi's vision, this barn becomes an atrocity. 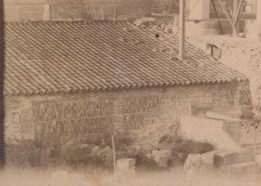 ​
The segment of the cathedral presented below is also somewhat strange. Looks somewhat melted. Pretty sure the official answer would be that it is this way by design. If so, what is it supposed to symbolize? The mud flood? But... is it really the design? 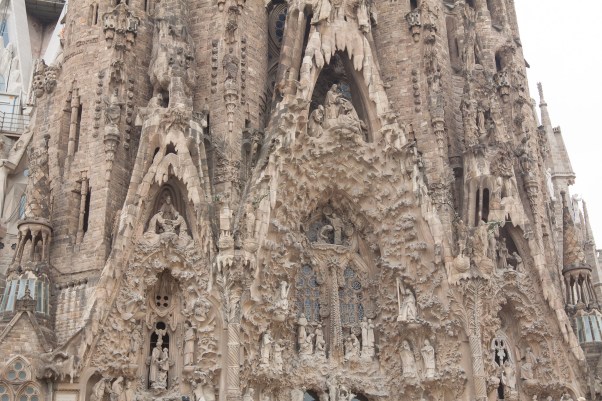 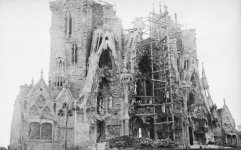 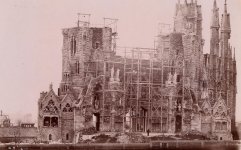 ​
Then we have the mystery of Mr. Gaudi himself. His architecture is out of this world, and requires further investigation. Also, what's up with the "unfinished" structures of his?
KD: Officially, everything appears to be making sense, including the photographic sequence. Did we get the entire story though?
Click to expand...

KD
"I can’t tell you exactly what year it is because we honestly don’t know." - Morpheus
K

Quite the architect for sure! Casa Batlló - Wikipedia

Knowncitizen said:
Quite the architect for sure! Casa Batlló - Wikipedia
Click to expand...

Interesting that one is an admitted renovation. Or not because I'm not sure what is going on with Sagrada Família.

KorbenDallas said:
I guess, one of the problems I have with this structure, is its progression from 1882 to 1889, and from 1889 to 1893. It appears that nothing major was constructed from 1882 to 1889. Than all over sudden within the next four years the building grew exponentially. After 1893 the construction slowed, and continued at a snail pace through present times
Click to expand...

Isn't that more like what we would expect though? The masterpieces that we see put up in little to no time with the supposed technology level of the 19th century are outliers. However, based on how I see construction projects go, something of this magnitude and complexity taking 100+ years seems about right to me. Sure, modern technology helps but modern bureaucracy and other monetary considerations could lead to a lot of stops and starts.

Still though, there's something obviously weird going on here. I think the mystery here might be more "why?" and "what?" than "when?" One thought spreads to mind that maybe the reason for the dated/destroyed-looking condition of certain areas is not artistic but rather they're reusing sections from some ancient structure. Maybe that's a factor in why it has taken so long to build too... perhaps this is a "machine" that requires certain unique parts that cannot be made, but only found. Or, and I'm obviously just wildly speculating, but I feel like there's a ritualistic, perhaps magical component going on. Like a collage for wizards.

Agreed, yet we still have no explanation for it. Once we try to analyze and compare their means vs. the outcome of their efforts, the first thing to stick out is always the construction speed they were able to randomly demonstrate.

What are we missing? Time and equipment?

We know they had cranes. Why don’t we see any?
Could it be that not every year 1882 was created equal?
You must log in or register to reply here.
Similar articles