The Meigs Elevated Railway was an experimental steam-powered monorail invented by Josiah V. Meigs of Lowell, Massachusetts. He wrote an extensive explanation of how the railway worked, complete with diagrams and statistics, which was published in 1887. The weight of the train was carried on a 22 inch gauge track. The train was balanced by an additional set of horizontal wheels which operated against a second set of rails 42 inches above the load carrying rails.

1840-1907
​
Josiah Vincent Meigs, 1840-1907, was an inventor, widely known for the Meigs Elevated Railway built in Cambridge, Massachusetts in the 1880s. Josiah Meigs was born and grew up in Tennessee, was an apprentice to his brother James, an engineer; and also served in the Union Army before moving to Massachusetts in 1866. 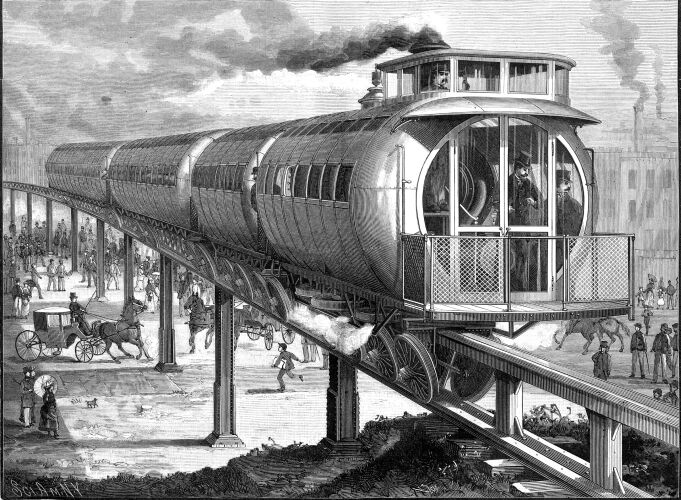 Opinions​
Does this look like an experimental 1886 system? They even came up with window curtains to experiment with. Scroll up to the very first image showing experimental 227 feet, which look a bit longer than 227 feet to me. What part of those 227 feet is this segment below? 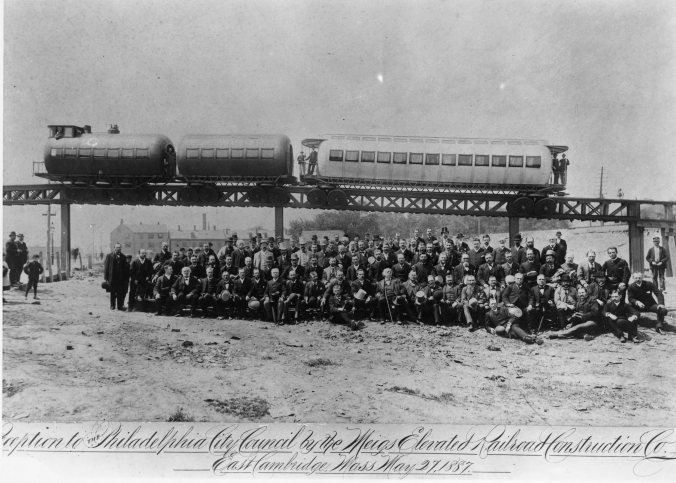 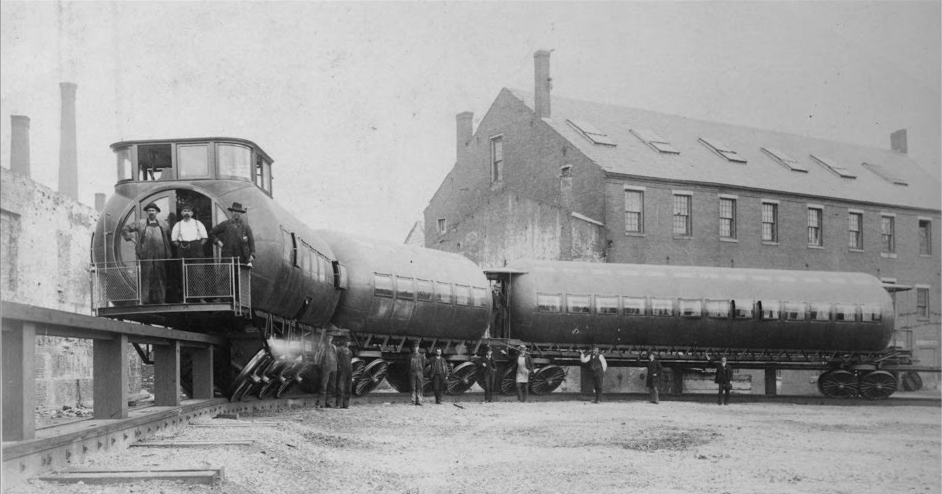 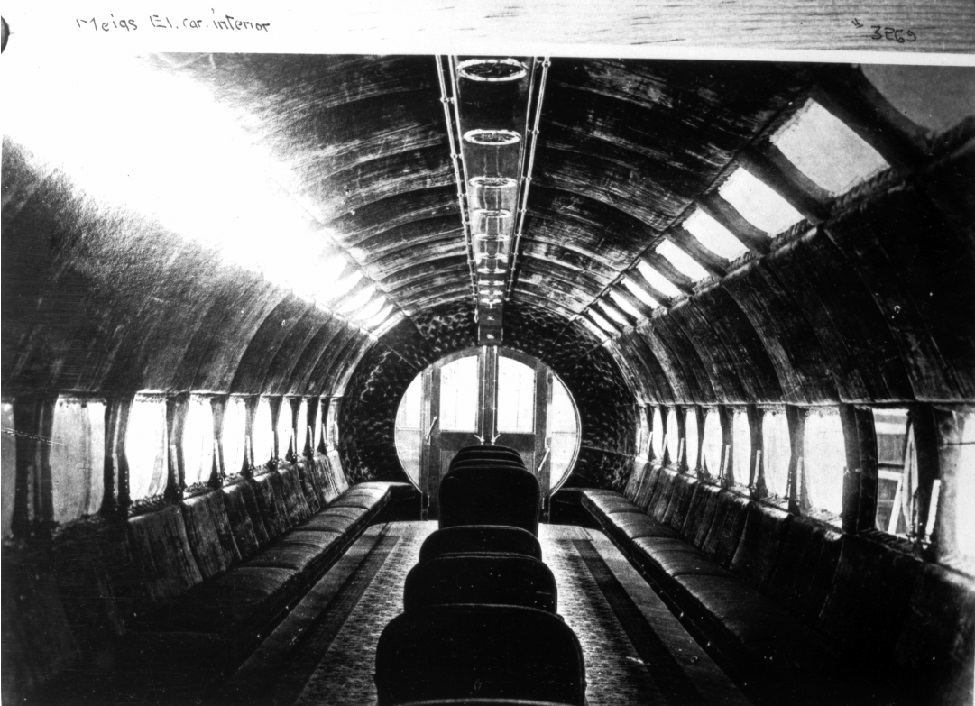 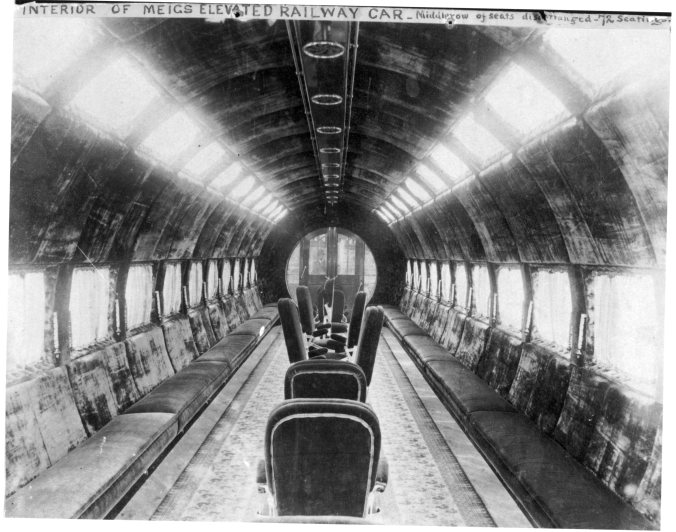 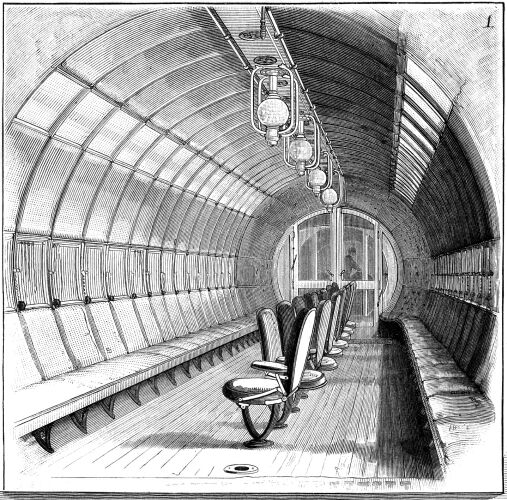 After the Fire​
This photo shows the extensive fire damage to a Meigs Elevated train car. Men are seen inside the damaged car, possibly (lol) investigating the incident.

KD: As you can see, we do not really have much info, neither on the monorail, nor on its creator. Most importantly we do not have any evident Research & Development which could lead to the creation of this "experimental" train.

Obviously, I only have my observations of the train photographs, the lack of info on the designer, the totality of circumstances and no proof but... am I the only one who thinks that this train was not an experimental model? In my opinion, this could be a fully developed, and working model created by somebody unknown who belonged to the society we so desperately trying to figure out. In 1887 they considered re-using it, but for whatever reason it did not materialize.

KD
"I can’t tell you exactly what year it is because we honestly don’t know." - Morpheus
S

The parasites that control our world hide a lot of technologies because they don't want the public to figure out how to advance themselves - they also brag that they have technologies, military weaponry, etc., that they don't have - to make us think they are more powerful than they are and to distract us from the truth in order to confuse us.

Haven't found a photo yet, but "Joe's" (as he preferred to be called, it's claimed) family is pretty influential. Here's his obituary:

Joe Vincent Meigs was born in Nasheville, Tenn, in 1840, the son of Return Jonathan Meigs, a distinguished lawyer of whom President Lincoln was especially fond, and who was nominated by him for the bench of the U S supreme court.
Click to expand...

Meaning he's related to the Josiah Meigs that does warrant a wiki:

So original Josiah is Captain Joe's grand uncle. Not to get too off the topic at hand, but:

Josiah Meigs (August 21, 1757 – September 4, 1822) was an American academic, journalist and government official. He was the first acting president of the University of Georgia (UGA) in Athens, where he implemented the university's first physics curriculum in 1801, and also president of the Columbian Institute for the Promotion of Arts and Sciences.
Click to expand...

Both Athens, Georgia and the Columbian Institute pop up here, which have come up before in my "travels" and have their own amounts of strangeness about them. Point is, this Josiah was definitely a forefather of modern academia/physics in the US. And he has a photo at this link:

That site has a write up on the railway from an 1886 Scientific American article, where they refer to Joe as a simple Mr., not Captain. Kinda rude.

Also, just for another layer of confusion, if you do try and look up Joe Vincent Megs, you'll find another relative of our dear Captain:

Meigs was a grandson of Captain Joe Vincent Meigs, who invented an experimental steam monorail known as the Meigs single-track elevated railroad.

Meigs syndrome is named after him
Click to expand...

BTW, going back to the obituary, what do we think this means?

Soon after the war Capt and Mrs. Meigs took up a residence in Washington, where he was an employee in practice in the court of claims; then he "fell in" with Gen B. F. Butler, who induced him to come to New England to live. With his family he came to Lowell, and purchased the residence adjoining that of the late general.
Click to expand...

Just a quick note on Butler:

According to biographer Hans L. Trefousse:

Butler was one of the most controversial 19th-century American politicians. Demagogue, speculator, military bungler, and sharp legal practitioner--he was all of these; and he also was a fearless advocate of justice for the downtrodden, a resourceful military administrator, and an astonishing innovator. He was passionately hated and equally strongly admired, and if the South called him "Beast," his constituents in Massachusetts were fascinated by him....
Click to expand...

The obituary also seems to add some more confusion to this 1886/1894 business:

Capt Meigs' invention, the single-track elevated railroad, created great public interest about 13 years ago when a demonstration section was erected in Cambridge and models were displayed in many of the business places of this city.
Click to expand...

Obit is from 1907 so this seems to be stating that the demonstration section was built in 1894. Which doesn't jive at all with the rest of those articles on the celebrateboston site, half of which are supposed to come from the same source, the Boston Globe.

There's also this, amazing this guy doesn't have his own wiki:

By U.S. patent 36,721 Meigs got protected a sliding breechblock locked by a pivoting strut. Few of such guns were made. .50 caliber Meigs cartridge, 25" round barrel, 50 round magazine rifle, sliding guard action repeating carbine. Based on his U.S. patent no. 54,934, improved in August 1868. Production was only three, numberedumbered 1 to 3. The gun is nickled and the reciever is made out of brass. Instead of a fore stock only a twined cord was placed.

One is in private collection in the US and one with number 2 is at the Cody museum, donated by the army who received it from Meigs for trials. These trials lasted four years in which about 38,00 rounds were fired without failure.
Click to expand...

That first patent was filed in 1862.
Patent PDF

The biographical information here better explains the connection between the General's interest in the Captain and his role in firearm development (placing him in charge of the United States Cartridge Company. It also neglects to mention any fire:

With General Butler's financial backing, Meigs and others began in 1881 the difficult task of seeking permission to build an elevated railway in Boston. Opposition by street car lobbyists kept a charter from being granted until 1884. In order to encourage capital investment and to fulfill one of the terms of the 1884 charter, the Meigs Elevated Railway Construction Company was founded in Cambridge, Massachusetts. By 1885-1886, one-third mile of track had been laid and an engine, tender, and car were operational.

By 1887 the elevated railway was both an engineering and a popular success. Lack of financial support, however, and continued opposition from street railways interests plagued Meigs and his enterprise.

Years of legal battles resulted in approval for the Meigs-Subway bill in 1894. Unfortunately Meigs' refusal to accept electricity as the chief source of motive power for the railway lost him financial support
Click to expand...

Maybe our answers as far as development of the railway would be those papers at Yale.

Meigs designed an "extraordinary" type of elevated railway—described best in his pamphlet in the folder "Misc. re Meigs Rapid Transit,1," in Box 7—which was installed in Boston on a limited scale in 1884. (The line failed quickly, but not because of engineering difficulties; rather because funds were lacking.)
Click to expand...

Funds were lacking? The Governor General Butler does die in 1893, so that makes sense actually. These dates are sloppy as usual though.

Anyway, as usual, I can't really make heads or tails out of this. It does seem odd I can't find a picture of Captain Joe, and that he's obscured by relatives of the same name on both ends of his life. And obviously the chronology of this train is pretty inconsistent.
You must log in or register to reply here.
Similar articles