I don't know about you, but the below ships, made between 1887 to 1898 look like submarines. It starts to sound pretty ridiculous, when you put hundreds, and may be thousands of all of them ships, locomotives, bridges, destroyed and rebuilt buildings, and thousands of miles of the railroads together. Add multiple Exhibitions into the mix, and factor in the wars the United States participated in between 1850 and 1900. What resources did this country have to produce all of the above?

Whaleback ship in storm
​
A whaleback was a type of cargo steamship of unusual design, with a hull that continuously curved above the waterline from vertical to horizontal. When fully loaded, only the rounded portion of the hull (the "whaleback" proper) could be seen above the waterline. With sides curved in towards the ends, it had a spoon bow and a very convex upper deck. It was formerly used on the Great Lakes of Canada and the United States, notably for carrying grain or ore. 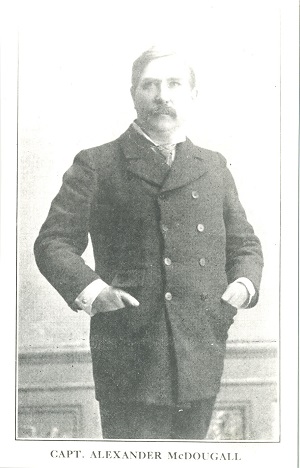 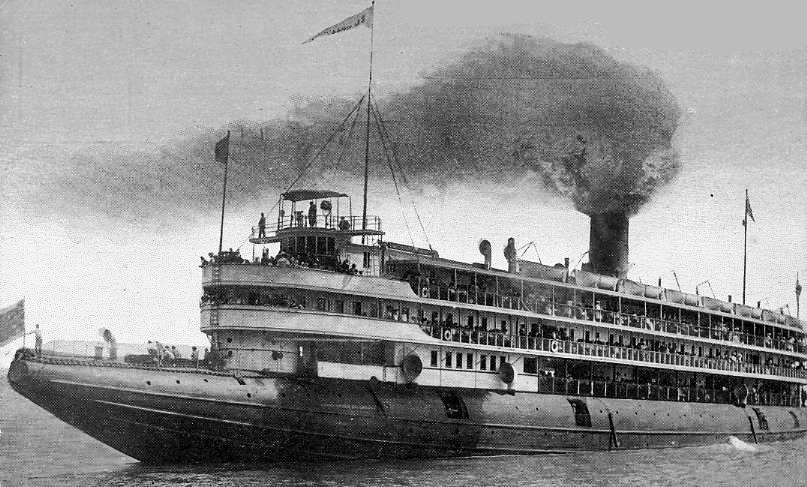 We have seen this type of docks before.

C. Columbus looks pretty ridiculous if you ask me... 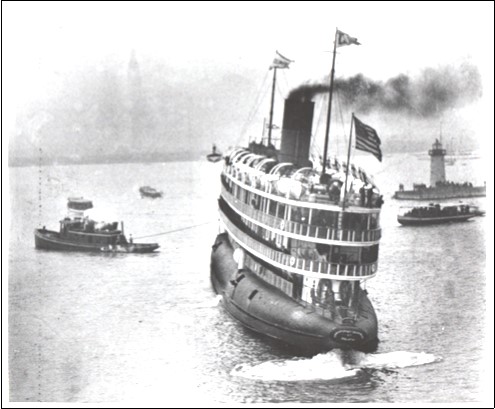 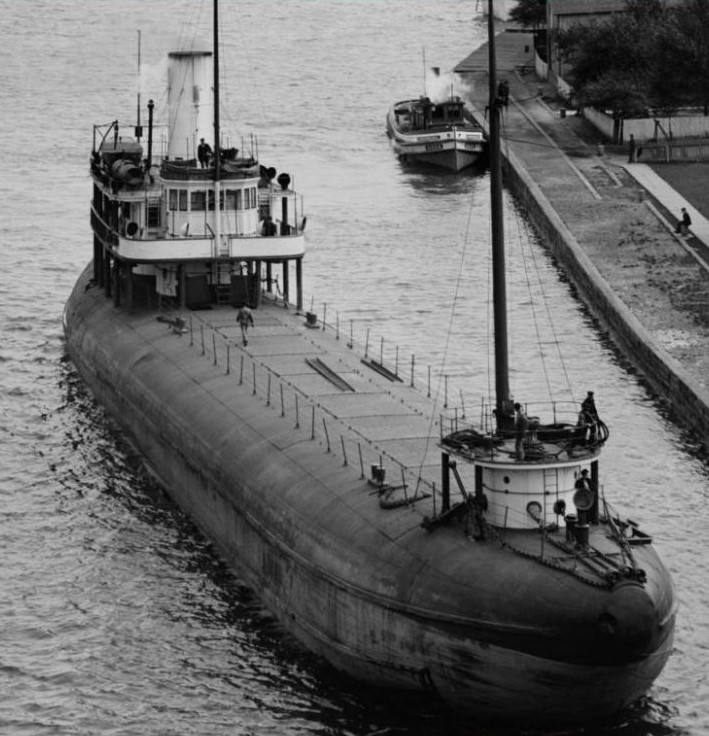 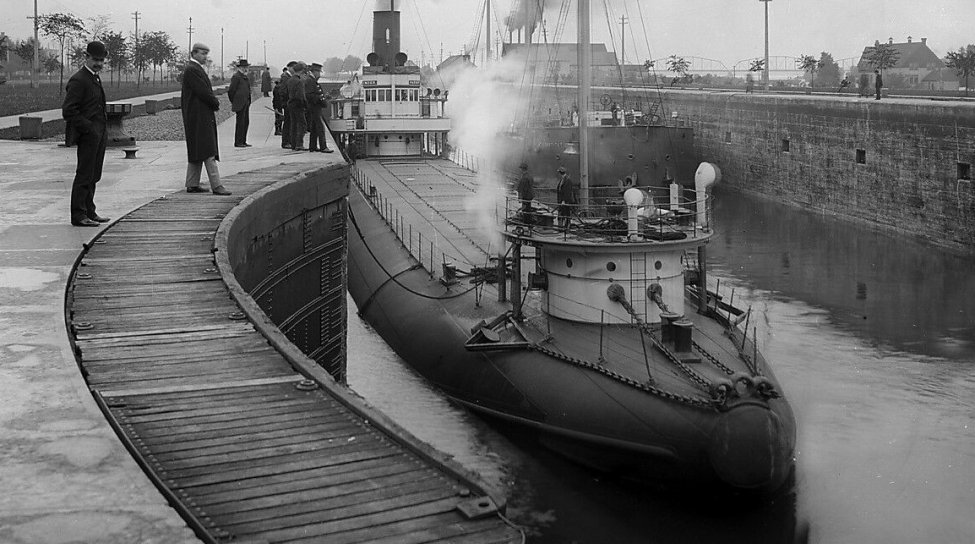 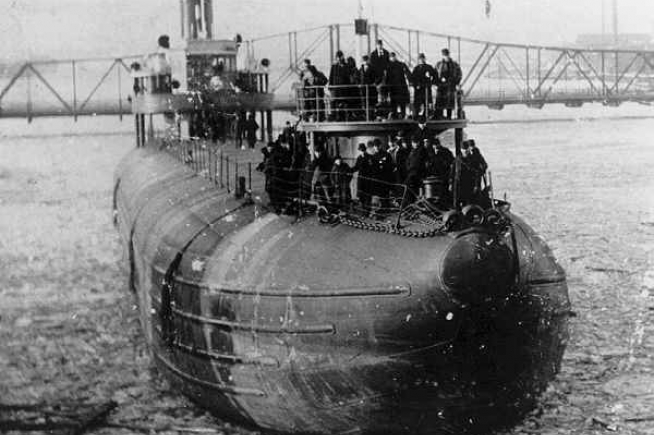 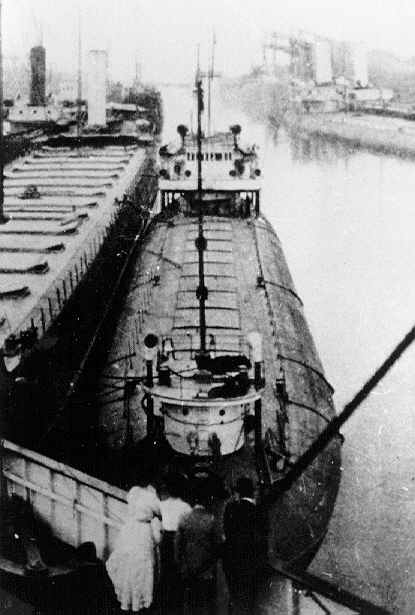 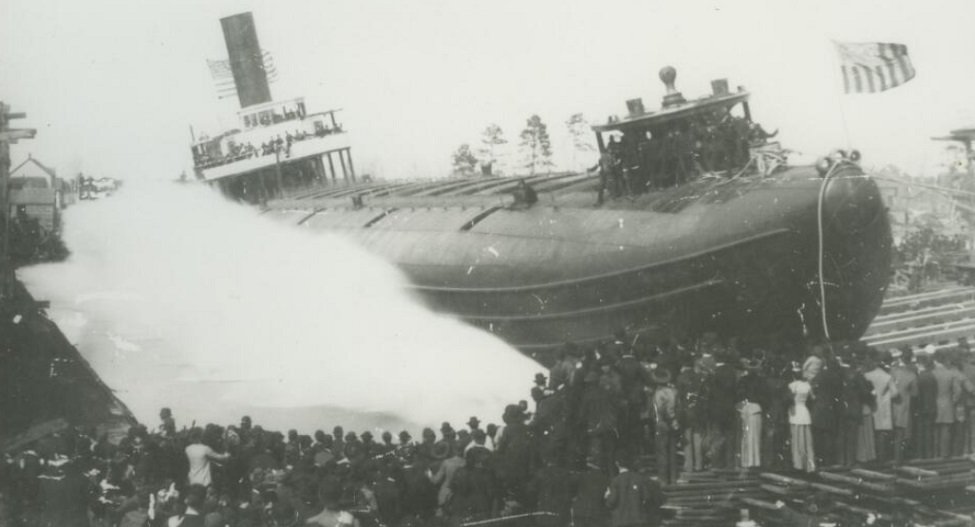 City of Everett
under construction 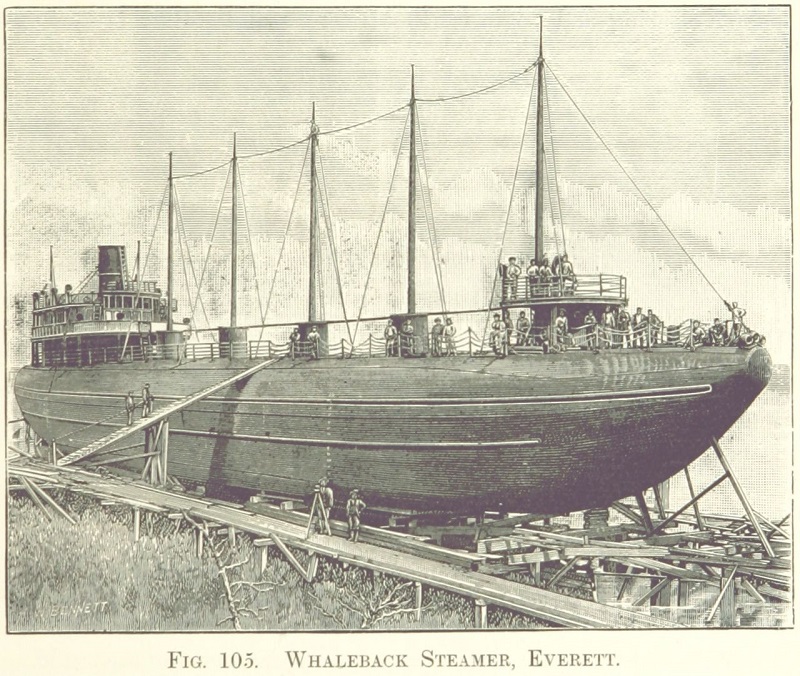 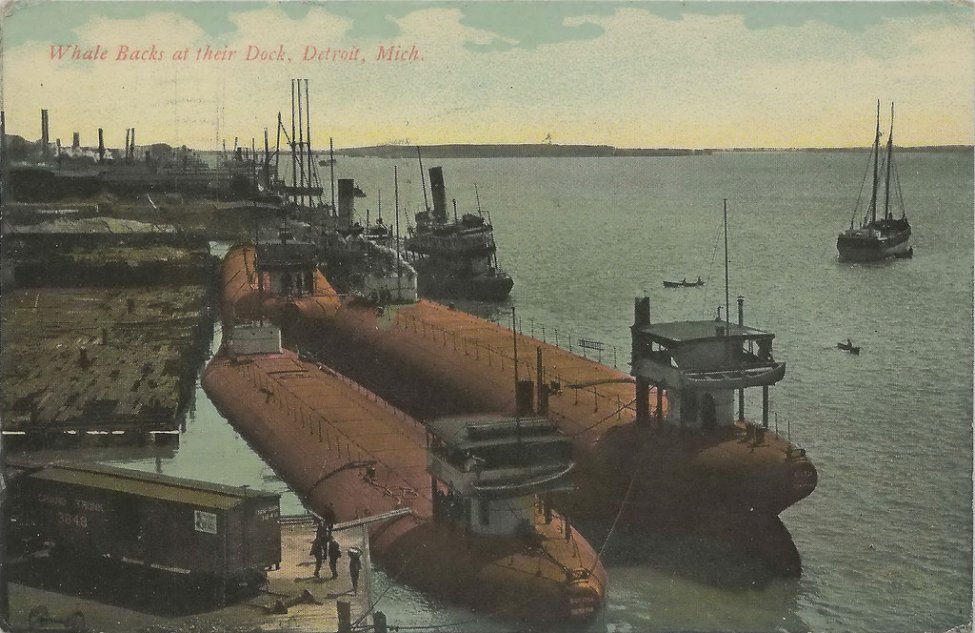 Allegedly, this is the original purpose of these ships: grain and ore transport, but... 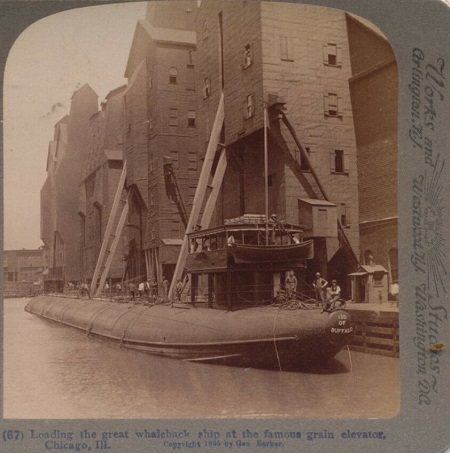 KD: I think we could have 44/48 of our Noah's type Arks here. You judge for yourself whether this design matches the time they were made. I have hard time imagining any other use for these between 1887 and 1898. These boats appear to be virtually unsinkable. Out of 44, or 48 boats there is only one surviving vessel out there. Coincidentally it is Frank Rockefellar, aka SS Meteor. 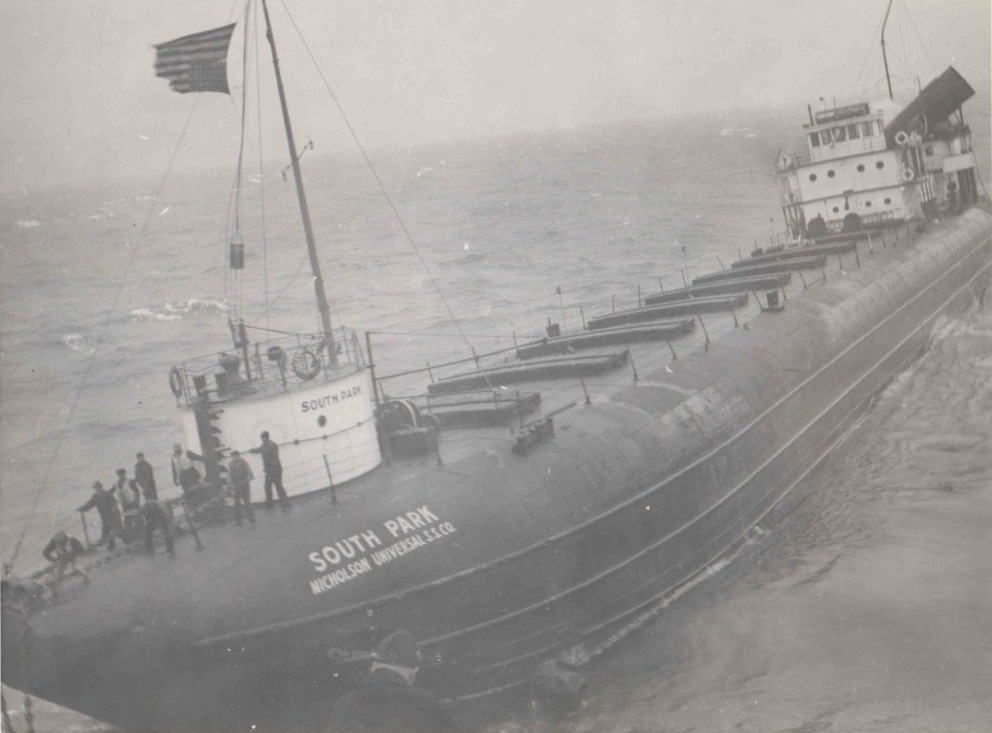 Source​
Take a look at a few of them Ark names. Here marches your future TBPB, I would imagine:
Anyways, yup, I do consider that these ships were used in a manner similar to the one observed in the movie 2012. A few chosen ones weathered the Storm, and went on to Rule this World.

the launch...​
Oh, and I did not specifically look for the construction photographs. I could be wrong, but something tells me that we simply slapped those superstructures on these fine boats. The rest was done by some other spin of our civilization.

Personally, what strikes me most about these boats is how the metal sheets were connected to each other. I didn't see any rivets. But welding, according to the officials, has not yet been invented. And the most interesting thing is what were these cases treated with? I'm in shock.
J

Alex12sb said:
Personally, what strikes me most about these boats is how the metal sheets were connected to each other. I didn't see any rivets. But welding, according to the officials, has not yet been invented. And the most interesting thing is what were these cases treated with? I'm in shock.
Click to expand...

Be shocked no more. Have a look here SH Archive.

I heartily suggest you spend sometime in the archive as its going offline in twenty odd days and there is lots of good stuff in there.
A

"Mostly used in Canada great lakes region". Could it be that they were built to withstand a flood that was known to be coming (glacial dams). Then, once that have passed, the "passengers" started work digging out the cities? If so, they why lie and cover it up? Thats way more amazing than cities accidentally burning down.
N

There was a meteor defense weapon in Siberia. Also 99% of the trees are only 200 years old.
Complements the time period.

So the old world was trying to defend itself from meteors, beam weapons, earthquakes, massive flooding. Not only did we see the destruction of the human race but also monsters, giants, dinosaurs, pygmys and more. Check out the high quality painting Suicide of Saul, There’s people escaping the carnage atop of long neck dinosaurs

I don't know about any of the rest and have only just started looking at the great photos but one thing has already jumped out. The flag shown on the (Sarn?) is the civil flag, as opposed to our military Title 4 version, as described in the opening paragraphs of The Scarlet Letter if I'm not mistaken. The reason we aren't taught about it anymore is, I think, related to the other things we find 'disappeared'. 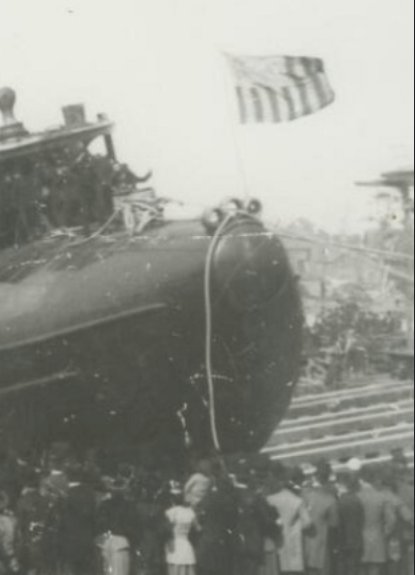 The Mystery of the Forgotten U.S. Flag

Anyway, I'd no intention of derailing a discussion on these ships, only that one of the photos might be showing the ship's age and/or side of the conflict in an unusual way.

This topic is just mind boggling to me, thanks KD and great research!
I'm probably going to reiterate some of what you said but why would they make a hull with rounded upper edges rather than edges where the deck meets the hull at a right angle as in almost every other surface vessel? Having the top sealed is not that unusual for cargo vessels but having edges that, if anything, encourage waves to crash over the hull is highly unusual. What kind of vessels have hulls like that? Submarines do. These must have originally been designed to be submerged, but not with those superstructures on top.
So I agree that these have to be re-purposed hulls that were originally designed to be submerged, to what depth is unknown.
One thing that jumps out at me is how these boats all have a flat plate at the bow or nose, rather than something that would cut through the water more smoothly as most ships do.

All of the whalebacks have this round plate on the front. Note that only the Colgate Hoyt, which you have pictured above

has the anchor chains going into the hull through that plate. All of the others have their anchor chains laying on top of the deck.

​
Here's the A.D. Thompson as an example. The angle at which the ship is riding is highly unusual, is it driving up onto a shallow area, maybe a dry dock of some sort? Or just has way too much weight in the stern? Whatever is happening, the people on the dock don't seem concerned. The hull does look a little beat up or dented.

​
Look at the front plate in this colorized picture of the Colby, create much water resistance? To be fair, the flat nose plates seem to be above the water, even in this shot of a boat that looks to be riding pretty low in the water, but its something we just don't see today. But obviously there's too much stuff on top to be efficient underwater as it is, though it looks like it might be able to take water up to that flat deck where the sailors are lounging.
So check out these unusual unloading cranes

which are made of two flat structures that come together at the top/point. We can see that these cranes cannot swing to the side as most cranes do. They only flip forward and back. Thus whatever they pick up has to be small enough to pass through the center of each crane, dangling from the tip on a cable. We can see a blurry box or bucket hanging from what must be the second crane on the right, and an object like a bucket hanging from the fifth(?) crane on the left. It seems like a strange solution to an unloading problem.

​
Here's another shot of the cranes in action. Possibly that was how they removed coal or grain from a whaleback, dipping it out in buckets. Maybe this method is more common but I hadn't seen it before.

Here's another view of that whaleback being loaded with grain. I'm betting it took a lot less time to load it than to unload it.

So I have to comment on the Christopher Columbus you have mentioned above. I just can't believe it existed, once again it looks like it was designed by Dr. Seuss! How could it stay upright? It would have to have a ton (many tons) of ballast in the hull. Yet it doesn't appear to be riding low in the water. In fact its the only whaleback I've seen that has open panels in the side of the hull. 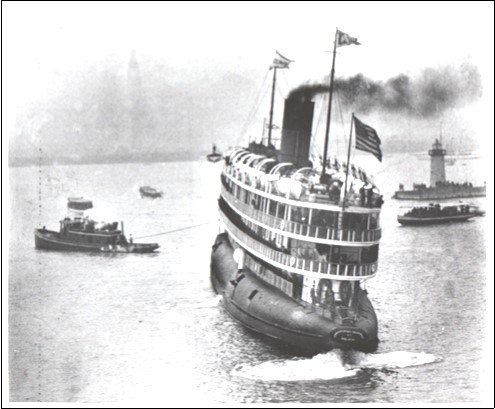 It even looks like its tipping over! Here's a shot in which it does not have that "third floor".

And this one, which the captions says it was in operation. 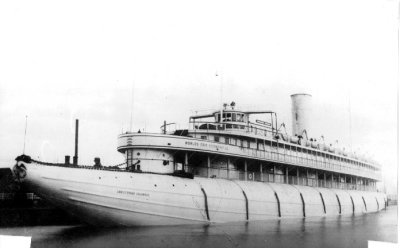 So there must have been several stages of evolution for this repurposed submarine. Possibly once they added that third deck it really was too unstable and that led to its demise. Wikipedia says it was in operation for four decades, but how much of that was with the third deck?
Here's a picture of it loading. $2 to go to Grand Rapids, sounds pricey.

Yeah. The use of them as cargo ships is ridiculous. Who would design a boat that is so hard to load/unload? What’s the benefit of carrying below sea level? The structures on top… crazy and scream afterthought.

my first thought was that these look like enormous pontoons, perhaps part of a larger structure? 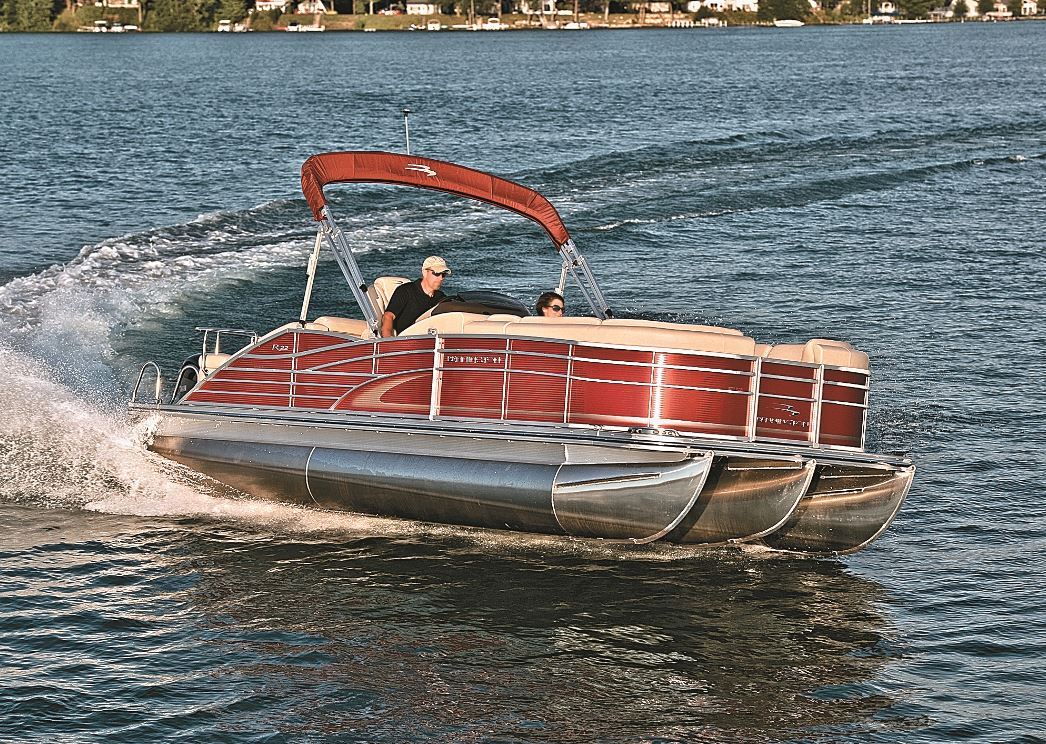 Once again to save copious copy and pasting have a read of this.
A pair of sites that detail the history of these ships.
Even John D Rockefeller funded one.
Whales of the Great Lakes | The Shipyard
McDougall’s Dream: The Whaleback – Spring 1953 – National Museum of the Great Lakes
Last edited: Sep 5, 2022
You must log in or register to reply here.
Similar articles