I can't seem to get off the trains train, lol. The below photograph attracted my attention a few years ago. I think this particular system was used a bit more than we could possibly imagine. Luckily there is some info we can play with. 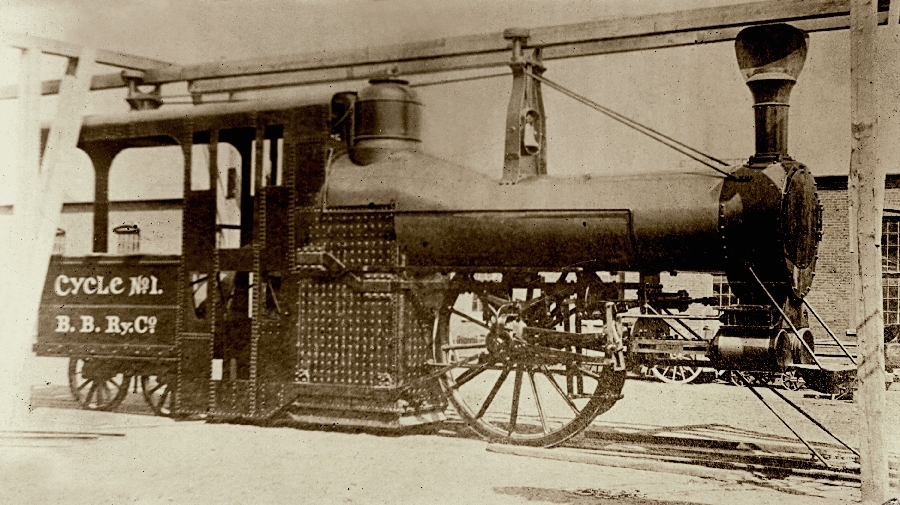 As you can see, there are a few additional surviving photographs of this steam powered bicycle locomotive. 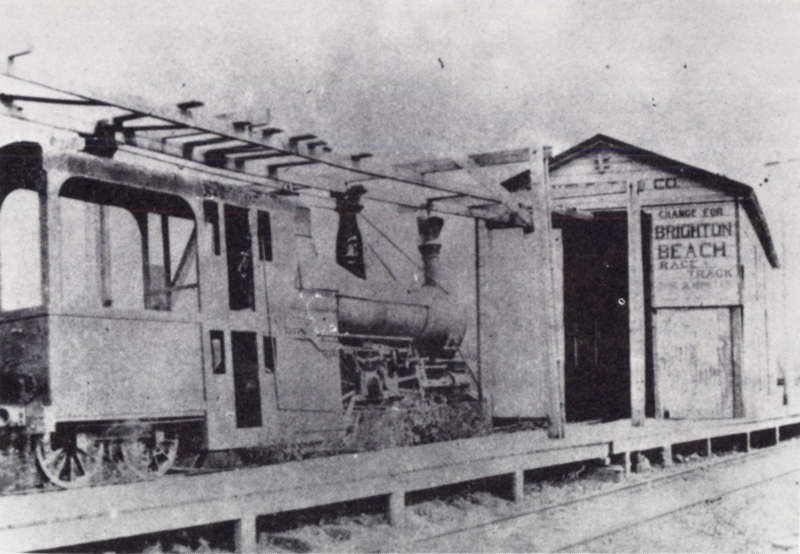 Source​
The locomotive above looks like it was parked there for a few days. What do you think?

​
Unfortunately we mostly have sketches, but what else is new? 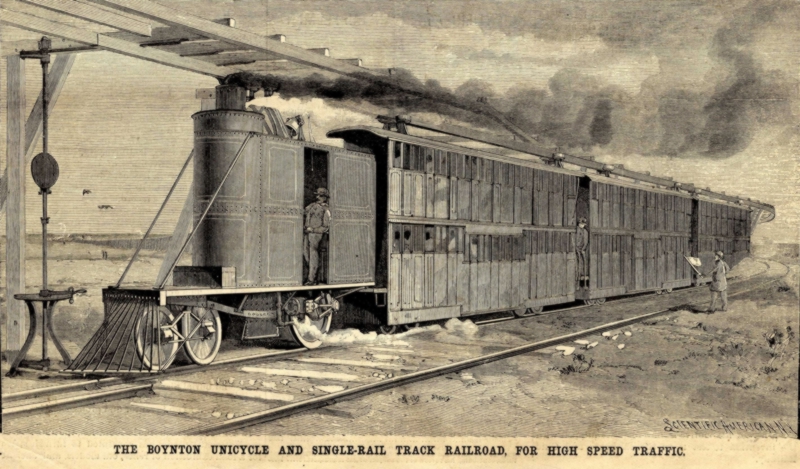 Boynton Bicycle Railroad​
The Boynton Bicycle Railroad was a monorail in Brooklyn on Long Island, New York. It ran on a single load-bearing rail at ground level, but with a wooden overhead stabilizing rail engaged by a pair of horizontally opposed wheels. The railway operated for only two years, but the design was adopted elsewhere. 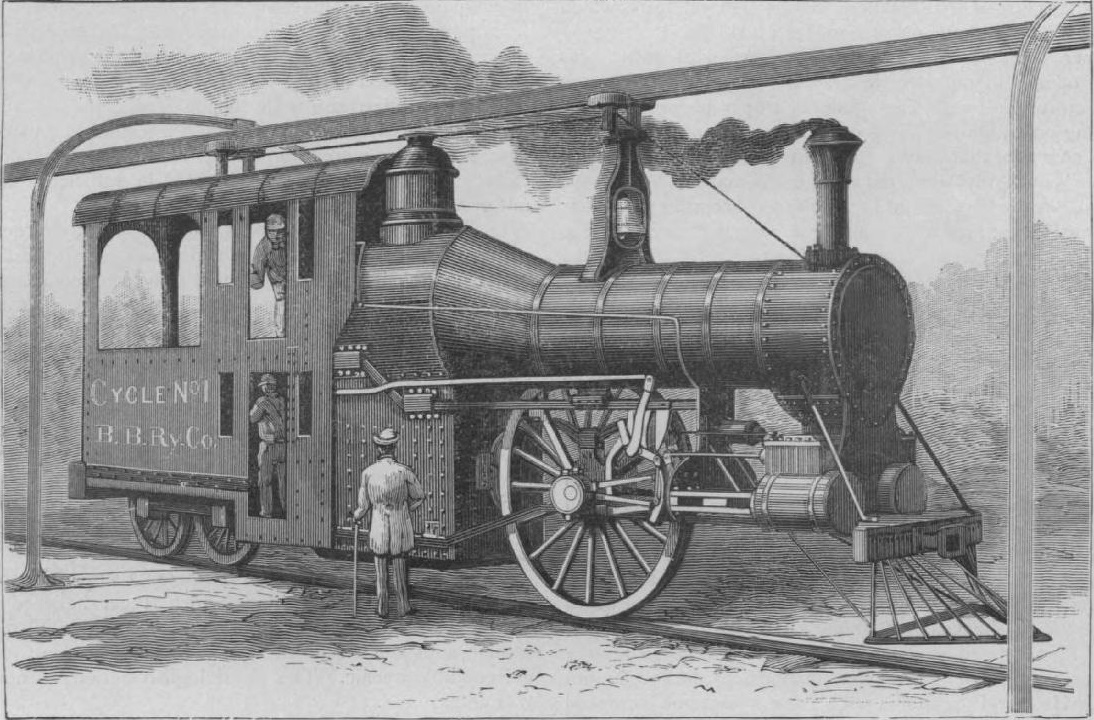 Source
​
According to the Scientific American of 28 March 1891, the steam locomotive and cars were in regular and continuous operation for passenger service during several weeks in the summer of 1890. The service was provided between the Gravesend and Coney Island areas of Brooklyn, on an abandoned section of an old standard gauge track of the Sea Beach and Brighton Railroad. The first locomotive weighed nine tons, and had two 10 by 12 inch cylinders, the piston rods of both being connected with cranks on each side the single 6 foot driving wheel, and the front of the locomotive being also supported by two 38 inch pony wheels, one behind the other. These wheels had double flanges, to contact with either side of the track rail, as also had similarly arranged pairs of 38 inch wheels arranged under and housed in the floors near each end of the passenger cars.
Let's see what this 1891 publication has to offer. 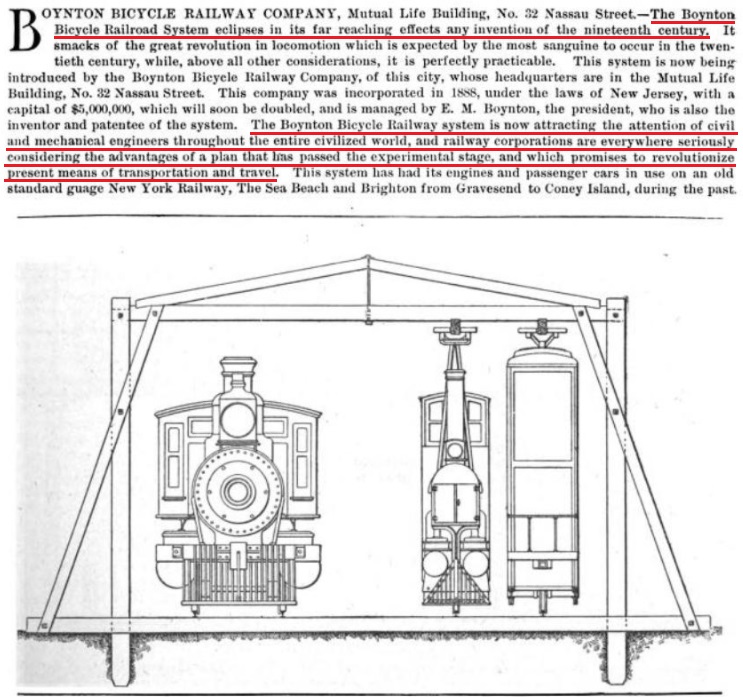 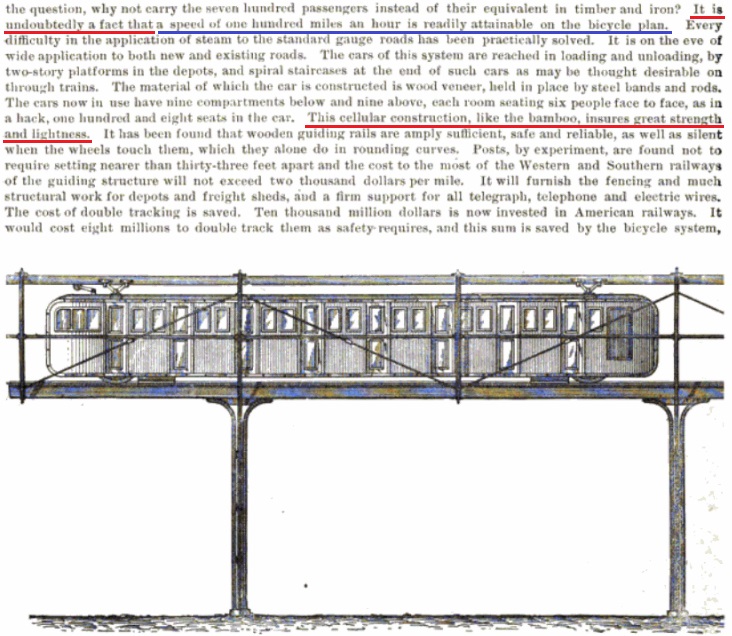 Source​
KD: I was borderline laughing when I made it to the end of this article. It sounds like our "green new deal" people found a time machine.


Electric Cars​
It's important to emphasize, that our contemporary bag of knowledge, failed to mention that Boynton Bicycle Railroad had electric trains in operation as well. 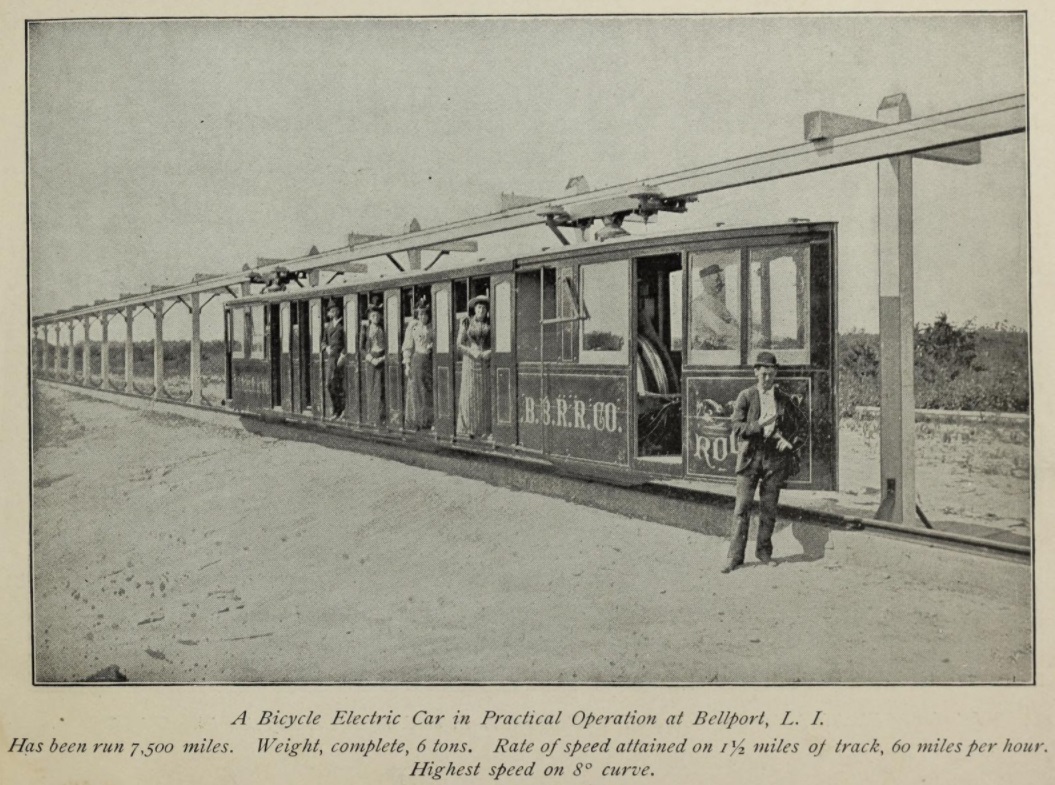 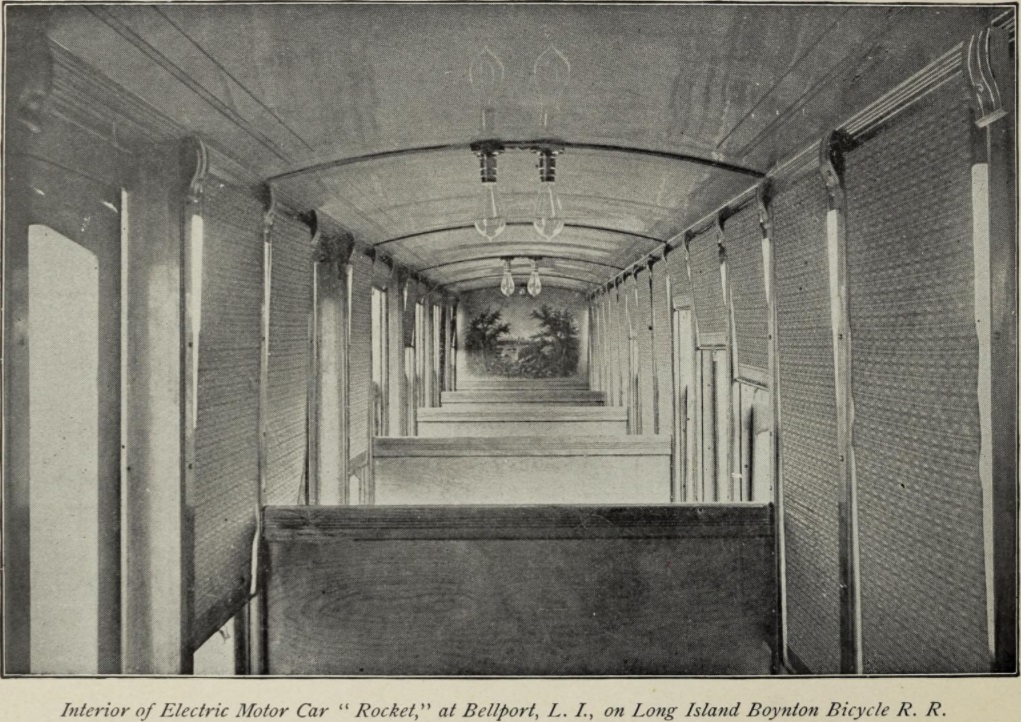 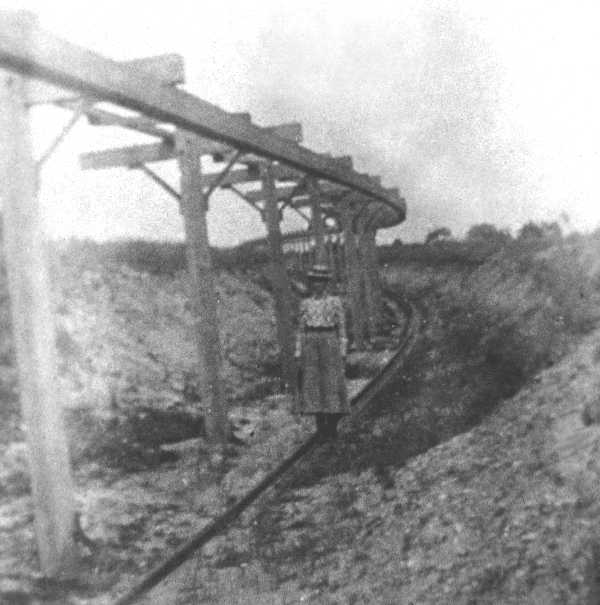 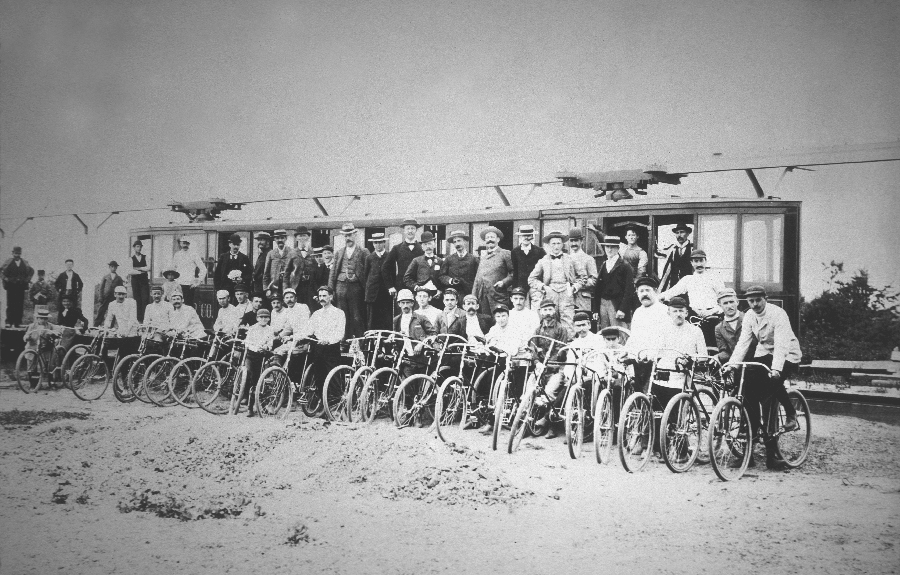 Source
​
Anyone else thinks that the below image (and some other ones above) were altered? 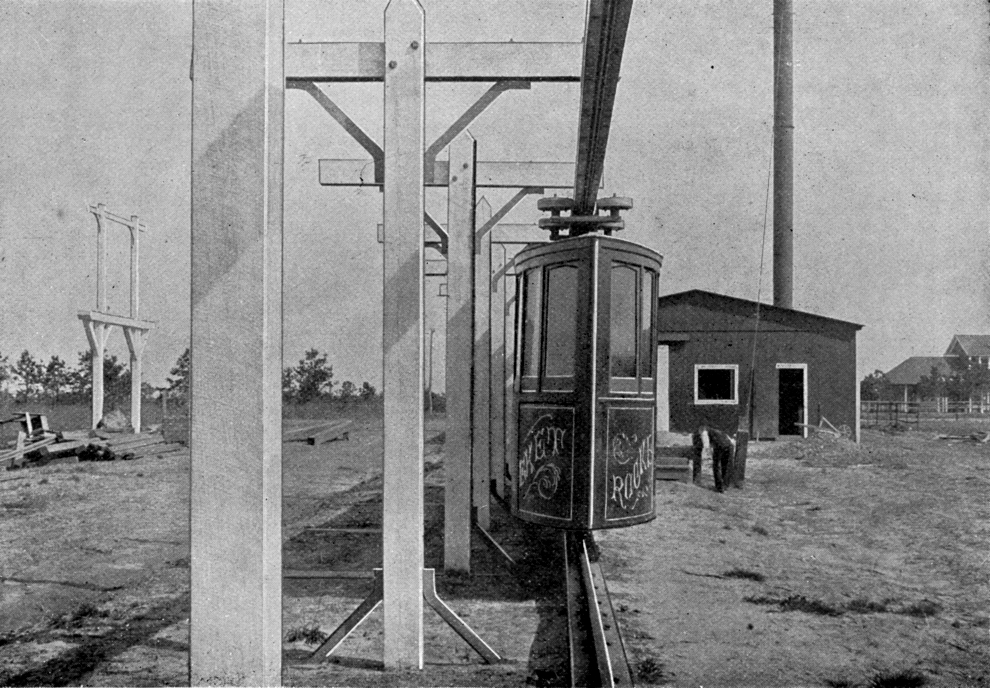 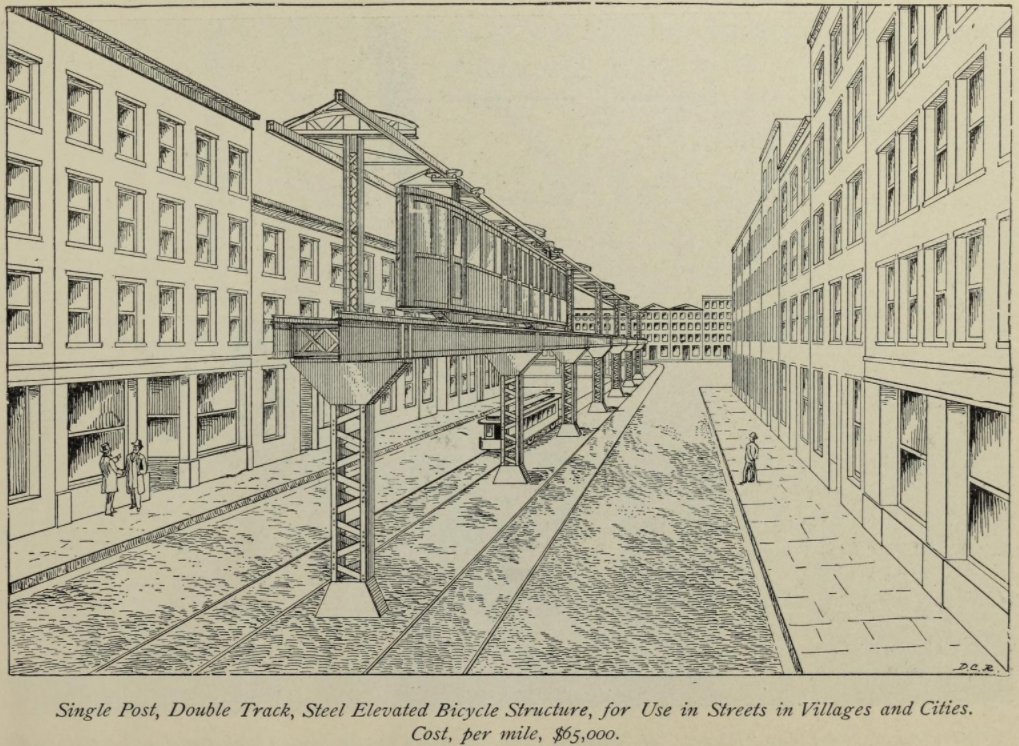 ​
Those little contrasting abnormalities... right? It's like watching a dystopian movie. 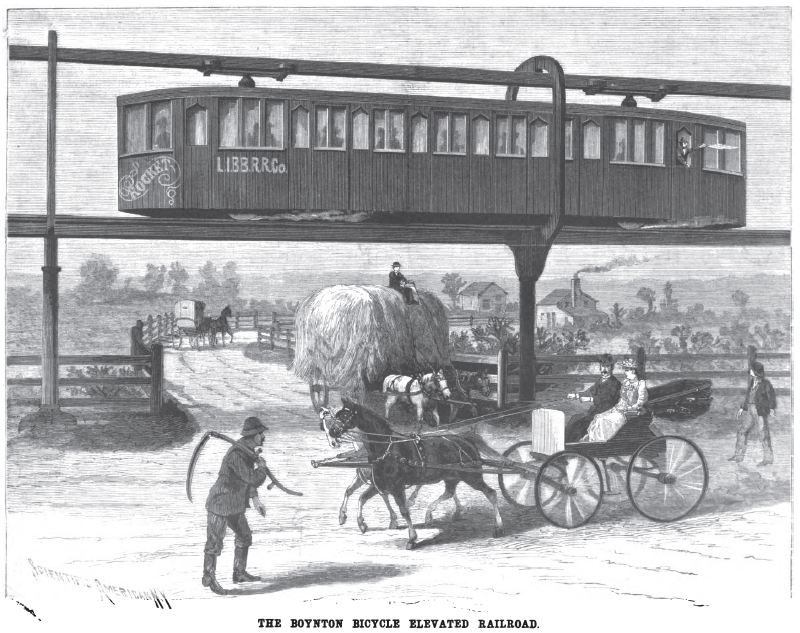 Source
​
The above "man with scythe" image is originally from the Scientific American published on 17 February 1894. It also has this info in there. 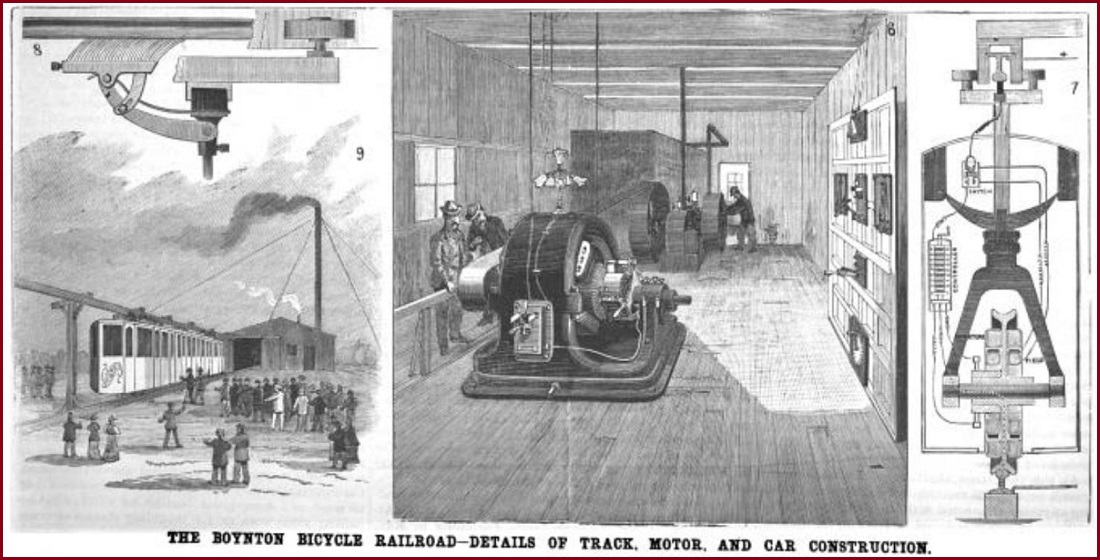 The "Inventor"​
The concept was invented by Eben Moody Boynton, who hoped that this would eventually replace the conventional rail road, because it was cheaper to build and could be used for a double track on the space available for a conventional single track right of way.
If we were to believe the writing on the image, and this source, below is our hero-inventor, who singlehandedly designed the entire contraption. 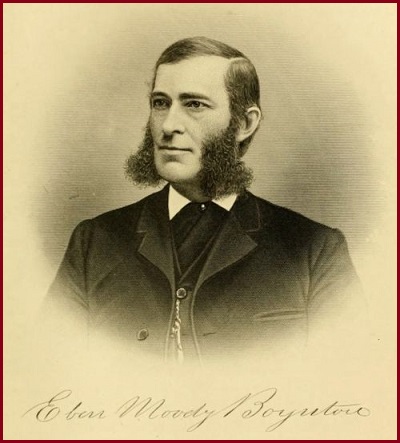 23 July 1840 - 10 March 1927​
The info on the above gentleman is somewhat scarce. Here is what FamiliSearch.ORG tells us:
According to Worthpoint.COM, in 1872 he either patented, or started producing his earlier invention, the so-called "M" Tooth-Cutting 'Lightning Saw'.
Yup, in 1872 Mr. Boynton was inventing saw teeth. But he was a "prolific inventor"... 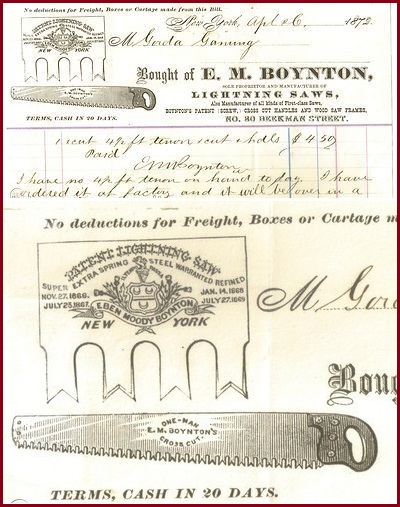 ​
Sounds like in 1920, when Eben Moody Boynton was 79 years old, he was held at the Government Hospital for the Insane aka Insane Asylum. Wondering what crazy thoughts got him locked up... remembered or knew too much? 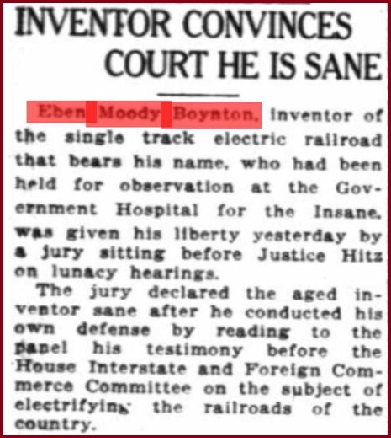 1891/07 and 1907/08 Certificates​
I am not sure what the true meaning of the below certificates was supposed to be. If you know, please share your understanding. Per the narrative, the Boynton Railway Company only operated in the state of New York. Below, we have two certificates (of incorporation?).
Are we being lied to, or there is an explanation for this? My questions are: 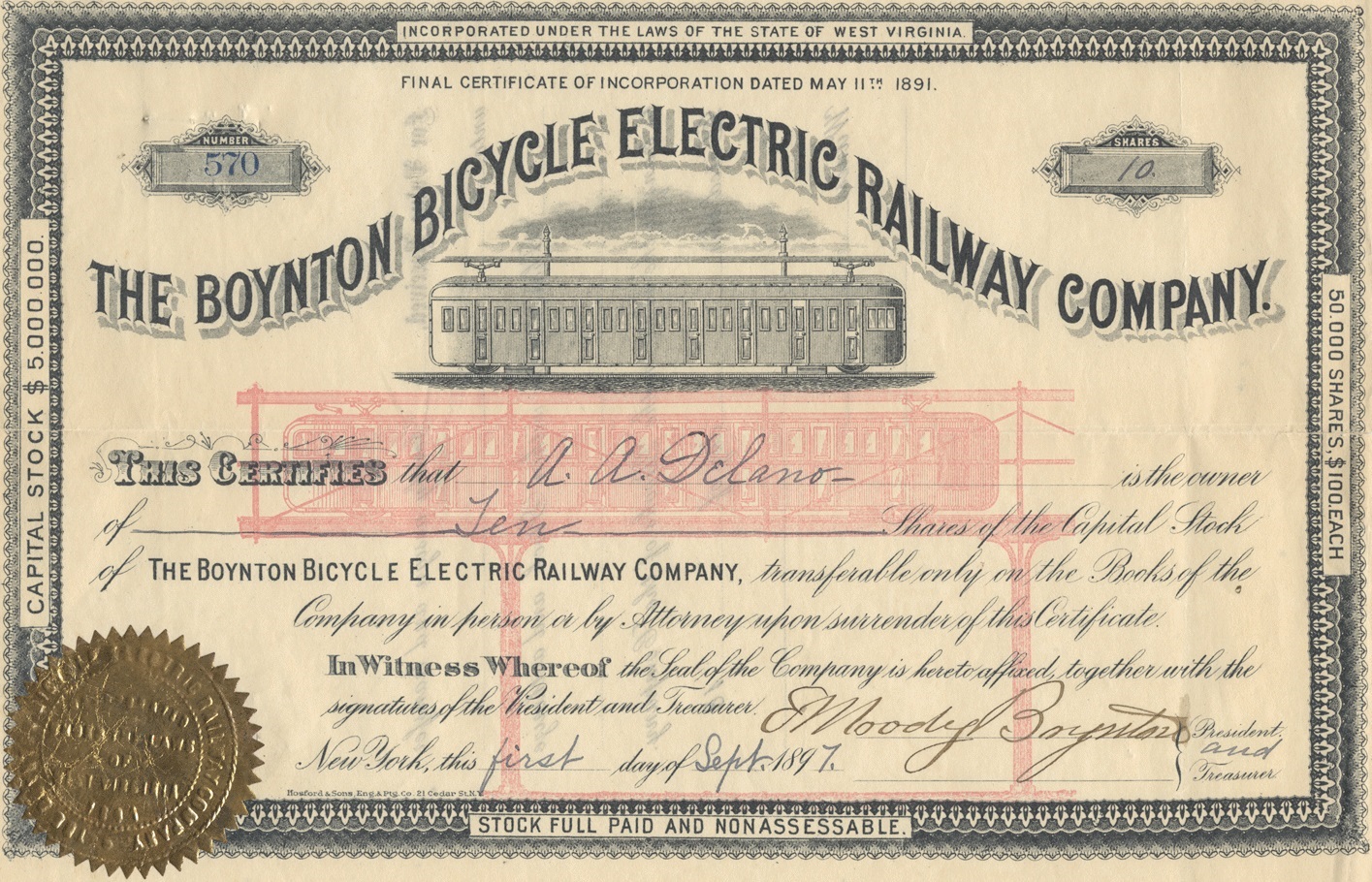 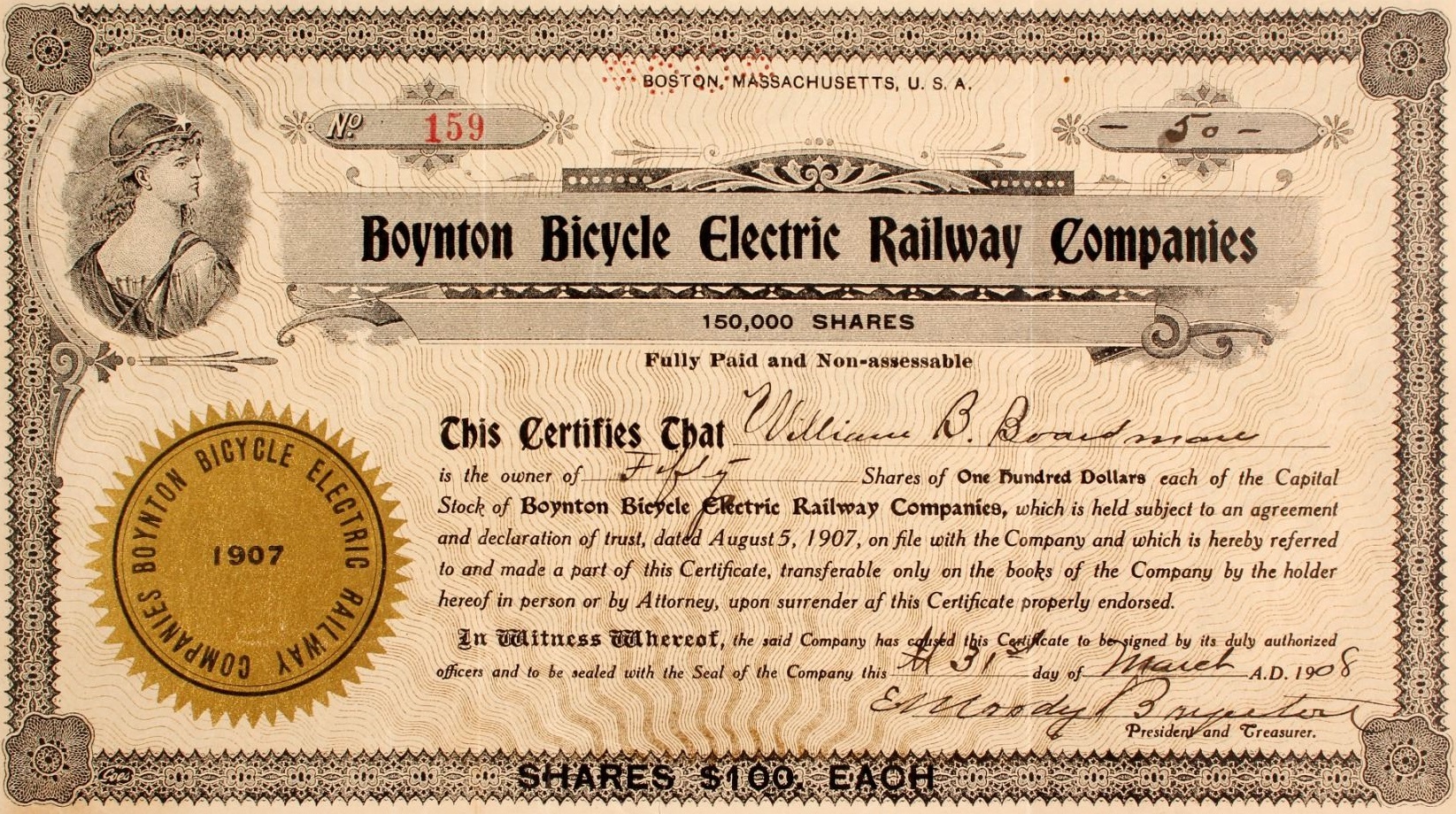 KD: Apart from hundreds of different regular looking and operating locomotives, we have a fairly extensive collection of some "ahead of its time" designs. Well, based on my school education, I do not think that these designs fit the time frame. That's just my opinion.
Once again we have a single person (E. M. Boynton) responsible for developing the entire system. We have steam locomotives, electric cars and god knows what else. For a prolific inventor of the 19th century even sky could not be the limit, right?

Anyways, if you have any thoughts on the above, please share in the comments section below. Where did this technological ecosystem come from, for we are not talking about cars and trains only.

Good research and an interesting idea I hadn't heard of. The electric version in an elevated format seems very practical for use in cities. I don't think having to build and maintain that strong upper rail and supports makes much sense for long distances through rural areas. As far as when the concept really came about, who can say. It was probably killed by the petroleum industry though for not burning oil and wearing out tires.

As far as I understand, the contraption was supposed to be exhibited during the 1893 Chicago Exposition. Unfortunately, I was unable to find any definitive photographs.
W

He named his bicycle train "rocket". What did the word rocket mean in the days before there were rockets?

Whitewave said:
He named his bicycle train "rocket". What did the word rocket mean in the days before there were rockets?
Click to expand...

I am not sure about rockets for travel, but as far as weapons go, the word was in use.

The Google ngram results for "rocket" are very interesting:

Don't have time at the moment to dig deeper (and I have about a dozen other threads I'm supposed to be following up on!) Plus, maybe this ought to go in the rocket thread.
You must log in or register to reply here.
Similar articles