I've had this image saved up for a while, so I do not remember the location of the construction. As far as I remember, the photograph was made somewhere in Siberia in the beginning of the 20th century. As you can see, gentlemen are holding railroad ties. 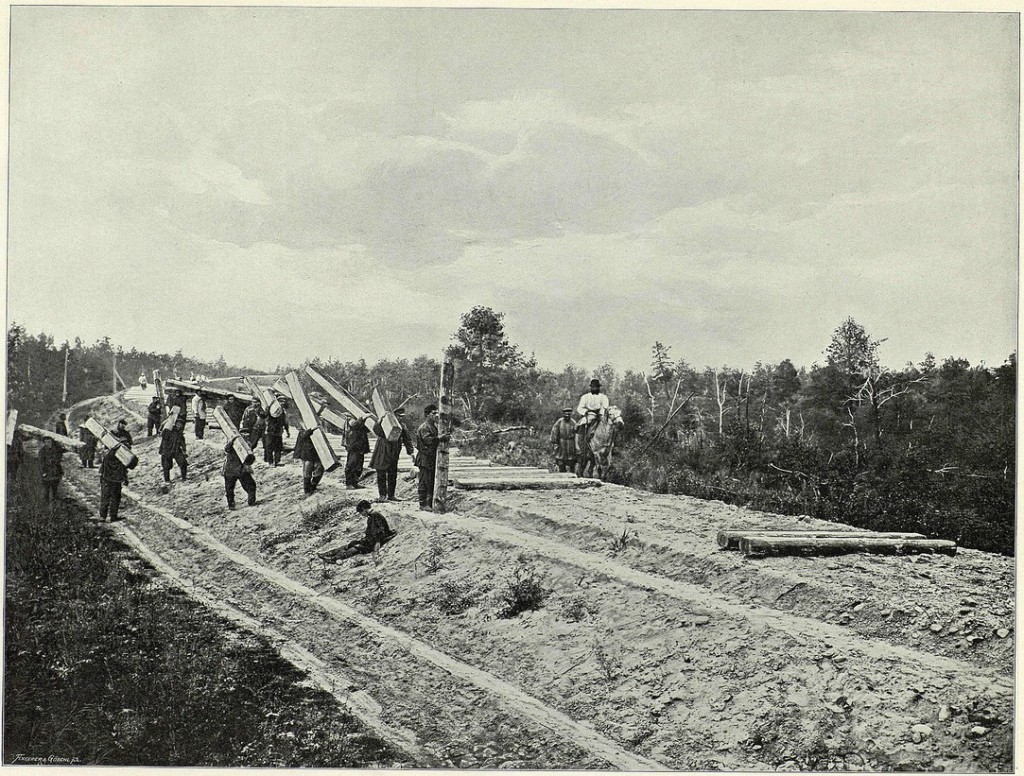 ​
I websearched to find out how much these ties weigh, and here is what we got. 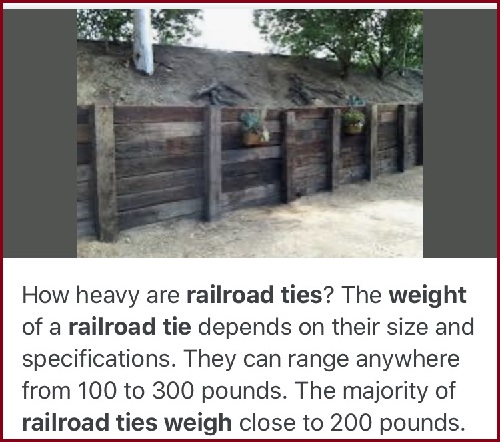 KD: What do you think? Are those light ties or some pretty strong people?

A bit of research suggests that with training an average man can carry about 145 pounds. So, these guys were either seriously fit or else mega tall individuals.
J

Depends what tree the sleepers were actually made from. No way to tell obviously but seems the builders of the railroad used many different types. Here's some links.
With the OP photograph at the top.

WORKERS CARRYING SLEEPERS for the new railway through the dense rolling woods which are known as taiga. This name has lent itself to the town of Taiga, a junction on the Mid-Siberian section of the line. Through the taiga the railway engineers had to clear a way for the track before it could be levelled and graded.
Click to expand...

This is an abridged and edited version of an article first published in Russian by Dv.land
Click to expand...

As you can see there are six men required to unload/load a length of rail. 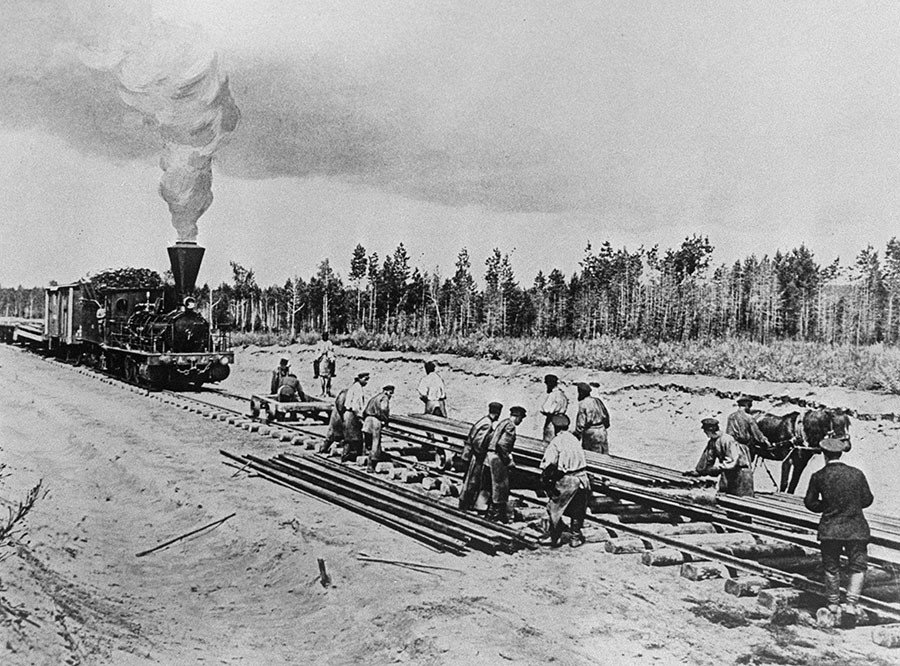 The isolation of its Asian territories is why St. Petersburg was scared when in the summer of 1890 it learnt about China’s plans for the construction of a railway to the periphery of the Russian Far East.
China with the help of English engineers began to lay its railroad from Beijing to the North, to Manchuria and onward to the city of Hunchun, located at the junction of three countries: China, Russia and Korea, just 100 kilometers from Vladivostok.

Curiously enough, the proposed Chinese railway from Beijing to the north, which scared Russia so much, was built several decades after the Trans-Siberian.

At that time China had 400 million inhabitants, and the Russian regions bordering the country had a population of less than two million. In August 1890, the Russian Empire’s Foreign Minister Nikolay Girs said the construction of the Trans-Siberian Railway was "of paramount importance.
Click to expand...

Just 40 years before the events described, it was China that owned the lands along the Amur and in Primorye. Only in the middle of the 19th century, taking advantage of the weak state power in Beijing, Russia was able to conclude a number of treaties with the Chinese that seriously changed the border in the Far East. Without the use of weapons and a single shot, our country included the lands that today make up the Amur Region, the Primorsky Territory, the Sakhalin Region, the Jewish Autonomous Region and most of the Khabarovsk Territory. These territories were 6,000 miles away from the European part of Russia. A century and a half ago it was possible to get from Moscow to the Amur in a horse-drawn carriage along the Siberian tract, spending at least 11 months on the road. The sea route from St. Petersburg to the shores of Primorye - around the whole of Europe, Africa and Asia - took six months. In fact, the Far East at that time was a distant and cut off from Russia "island". Therefore, almost immediately the question arose about the construction of a railway for new lands on the Amur and in Primorye. Before the founding of Vladivostok, there were still 6 years, when in 1854 the Governor-General of Eastern Siberia Muravyov-Amursky wrote to Tsar Nicholas I about the needs and prospects of the Far Eastern Territory: "In all likelihood, a railway will be built, the need for which will become urgent in a very short time." ...
Click to expand...

What projects for the construction of the railway were offered by foreigners In 1857, the British engineer Dull and the American Collins proposed to St. Petersburg to organize an international joint-stock company Amurskaya Kompaniyskaya Railway. But in order to create a railway line from Nizhny Novgorod to the Pacific Ocean, foreigners demanded the right to perpetual ownership of the land on which it was supposed to run the road, as well as the exemption of the company from all taxes and duties. As a result, the Russian authorities abandoned such a project, rightly fearing that if it were implemented, the distant and not yet developed Russian land would be completely under foreign influence.
Click to expand...

A Briton and an American interfering in Russian affairs, colour me shocked!

It certainly appears that the railroad ties in the OP photo were drawn in, which raises one question...what were they carrying that was then covered by these cartoon railroad ties?
A

John Nada said:
It certainly appears that the railroad ties in the OP photo were drawn in, which raises one question...what were they carrying that was then covered by these cartoon railroad ties?
Click to expand...

Not only ties but the people themselves look drawn in...
I

I believe on the Original steam train tracks, the rails were tuned.

Steam was designed to move you WITH your soul. The big steamers ran like a heart beat.

The world is using numbers to count.

Numbers are for Measuring, not counting.

Ignore me, I'm a mad Aussie.... a Ram, trapped in a Goats world. But I have fleeting memories of ages past. I think it (goat world) is a veil, a trick, to subdue the 'Muse's' of the world. The old souls whom from inspiration is filtered... the monotony and bar-codes and regular and repetitive click...click....click of the tracks... is a spell to try and disillusion the Muse's and create he'll on earth.

Muse's don't create 'it' themselves, it's drawn from their connection to the world, which has been subverted. Muse's often don't know they are anything special, but if ALL the music you listen too is 'the soundtrack' of your life( exceptionally relevant, describing your emotional state, feels written for you) and "people" bleat at you WHAT they have(want you to believe they have, so IT IS created).... well then,

YOU, may be a Muse, isolate from those that bleat.

The 'War of the Roses' is the longest battle in history (3500yrs)... Rams NEED to look at nature to regain the sense of place.

The 'Father of All Lies' is a woman. A bitter, spiteful and jealous one. And the war started because of the Immaculate love Adam had for his children... Eve was Jealous of. She had the love of Adam and the children, but lacking the divine 'creative spark' for others to draw from and create the world with... SHE grew bitter and envious.... BECAUSE she wanted to be 'the inspiration'... regardless of the damaged and tragic world that would be created.

Saint-petersberg vs California. (Kali-goddess of death, Fornication-f@cking) don't be dreaming of Californication, be living positively, satisfied and awake in nature, not Zombified to a black-mirror.

Wrong place for this rant... but I'm off-net but for my music. (15 years of Disturbed while they wrote my feelings toward goat-world.
But I'm waking up, remembering. ( Toto, africa) some-one, (Eve, Helen) is at my computer writing out this tragedy... I've crossed timelines, the mandala effect is a joke compared to how lables, signs and poster change in my world(daily sometimes).
Behind Blue Eyes
One Headlight
How you Remind me
21 guns by Green day....

Rupis Negra..... the black rock at the centre... surrounded by water?
A giant Red Rock IN the centre.... Uluru/Ayers rock.

Sorry, back to trains, my grandfather was sent a broken steam whistle, grandson, grab those callipers.... we built 4 steam whistles, gave each a different 'note', used no pencil, no planing. They are all on 'paddle steamers', somewhere down south on the Murray.
My son love steam trains. We will build a small-scale one (to start) melt down old softdrink cans a brass taps if I have to... but those tracks....
Will NOT click....click....click, they click..clack...clickity click clack clickity clickity clack click clack.

Men, believe in your sons, show them the world around them, not in some 'magic black mirror'.... it's for research and sharing of ideas.... and to vote for funds allocation after the politicians are gone.

Ewes should only EVER vote for their Ram, but Goats said, vote for me and you won't have to do what rams says, he will do what ewe say.... or together we'll send in the pigs, steal his children, house and half of everything else.... you just need to believe in Goats and not the good Ram you married.

Fix the world, mine has changed Tremendously in the last 3 weeks (it okay to sleep and eat.... but only WHEN you need to. 2 weeks of neither and my body is Chiseled, like a statue in a museum... but that was to initiate change.) An hour or 2 sleep seems my number, and a little seeded bread and peanut butter or strawberry jam goes a long way.... unless you think your king and NEED the best and the most and no scraps for anyone else.

I'm moving to Wool/Natural fabric, polyester is plastic goat-garbage, Hemp can be fuel, oils, fabric... or compressed into bricks to run Steam engines.... lighter than coal. Stick some cows in an open, but roofed shed.... free gas! Or listen to the Goats that want to tax you for cow farms and then Sell then back to you.

Be Strong, think Clearly..... a C- means try harder, A+++ you trying to please Goats.... B+, good enough, be positive, be satisfied, clean your house then the yard... others will notice and follow suit.
NEWS papers only served as a way to get things moved.... not to sell you stuff you don't need or to tell you opinions that are NOT yours.

I could go on.... but 'you need 'help', 'you are not right in the head'.... 'you CAN'T change the world' is being bleated at me by Goats and Eve's and Helen.
You must log in or register to reply here.
Similar articles