Fou-Sang & 1870s board game: from New York to San Francisco via the Union Pacific Railroad

The front page of the David Rumsey Map Collection is the one to thank for this article. I noticed "From NYC to SF" image, and decided to post it to solicit some comments. Instead, I ended up commenting on it myself. Could not really help it, and the process of commenting made me think of a few thing. My thoughts are below.

Anyways, as per the source:
LOL factor: The cover of the game box has a lovely colored litho view of two women joining hands across the American Continent, one representing America and the other Asia.

While it's somewhat funny that they are misrepresenting Gods...
... there is something very peculiar in the below image and its description. Why Asia? Are we talking about India (Indians or Indiens?) or China here? 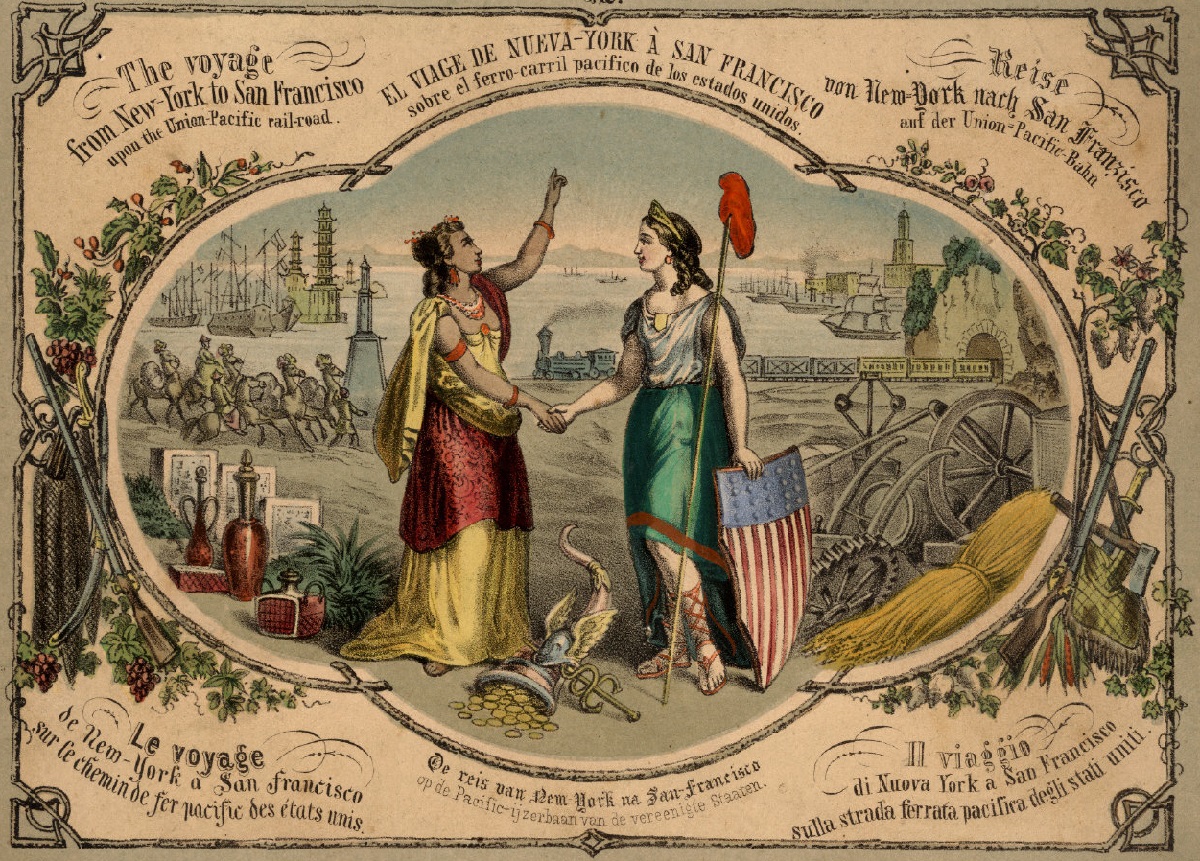 ​
This is what in their 1870s opinion the city of San Francisco looked like. Of course, we know that it looked totally different, but they wanted to "educate" the masses, right? 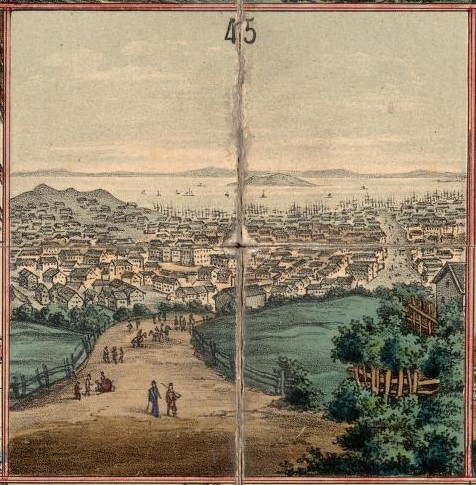 ​
And then we have a few other places in between, starting with the NYC. 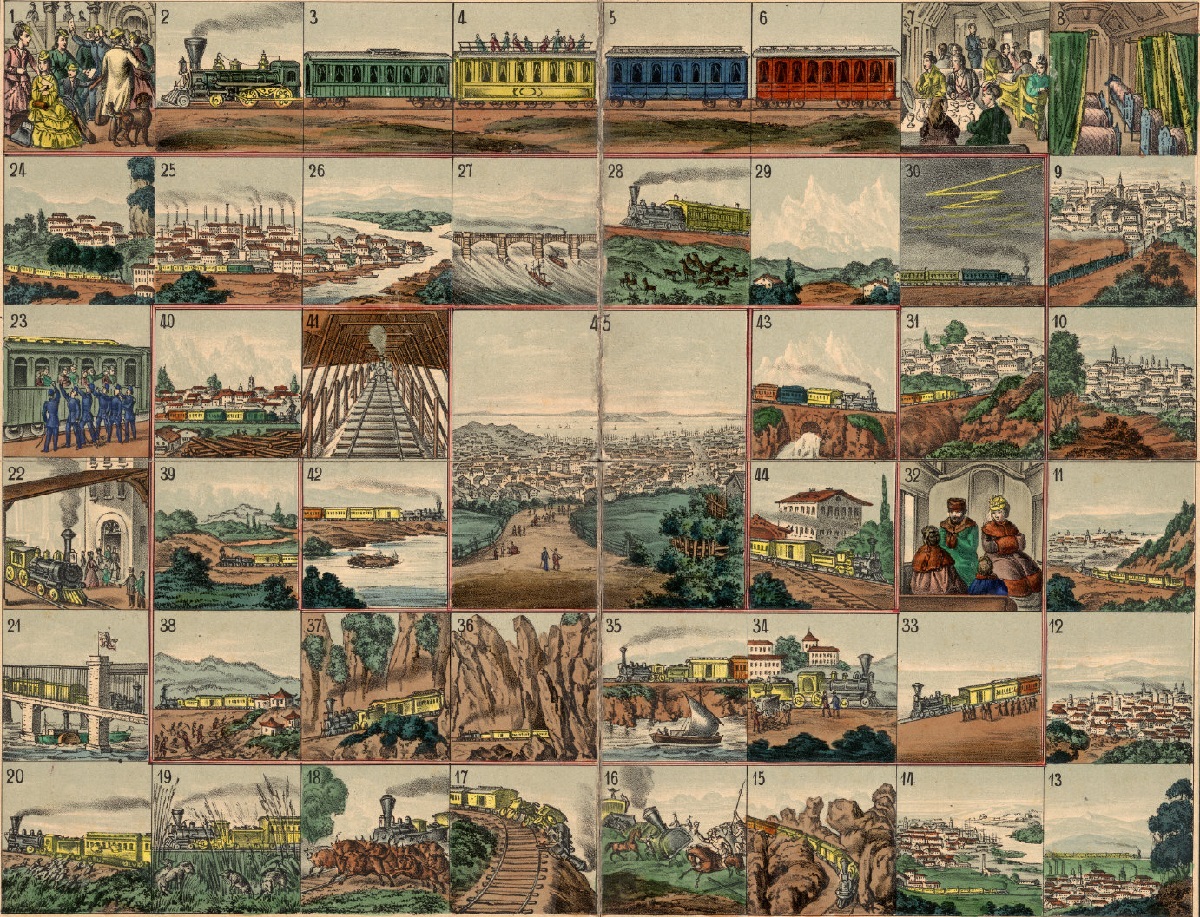 Source
​
So we have this trip from New York City to San-Francisco. And then we have these two so-called "women", one representing America and the other Asia.
So... who lived in San Francisco just prior to the time when this photograph was made?

And one more little detail I have to add to the mix... but this is an interesting one. To understand what I'm talking about you need to disregard our regular "from within the US" orientation, and approach it globally. 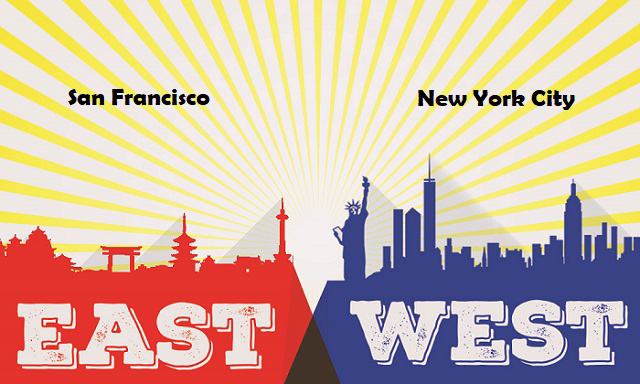 In other words East is West, and West is East, but globally. And here is what we have, as far as city founded-ation goes.

On the Right (West):
On the Left (East):
As you can see we have this wonderful ~200 to 300 year long settlement time gap. We do have an official explanation for that, but I do not trust it. Anyways, here is what the advancement looked like. 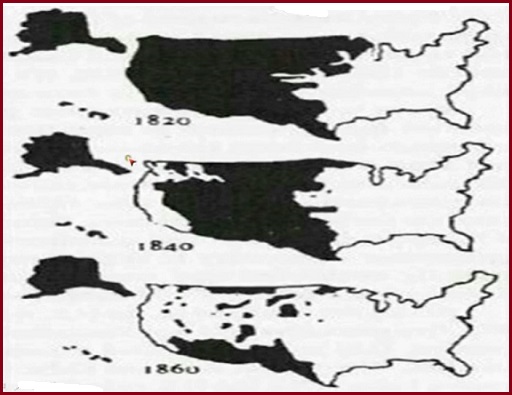 Fusang​
A country named Fusang was described by the native Buddhist missionary Hui Shen in 499 AD, as a place east of China. Hui Shen went by ship to Fusang, and upon his return reported his findings to the Chinese Emperor. His descriptions are recorded in the 7th-century text Book of Liang by Yao Silian, and describe a Bronze Age civilization inhabiting the Fusang country. 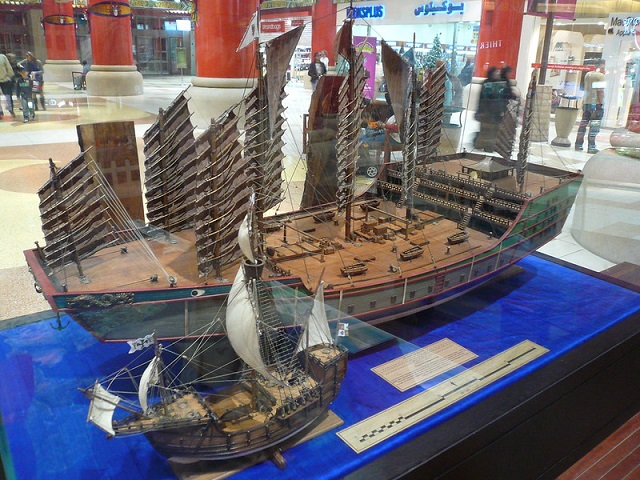 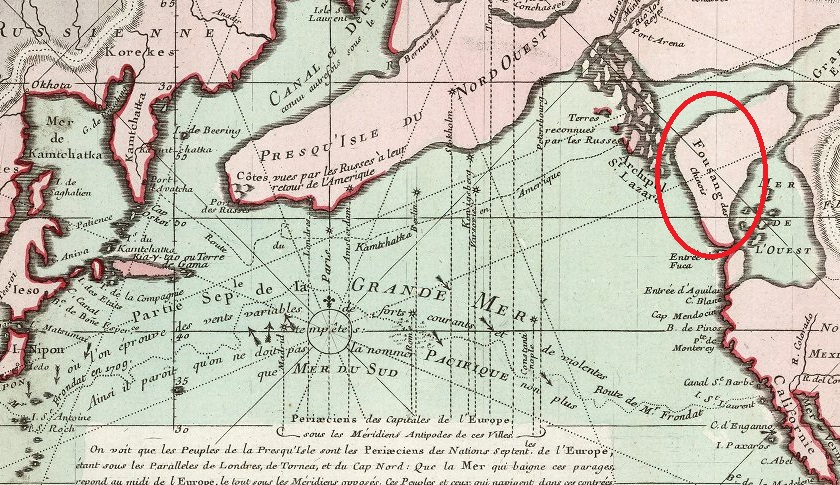 1776 Map​
Engraved hand-colored in outline, double-page map of the northwest coast of North America and northeast Asia including the North Pacific Ocean to the Bering Strait and the Kamchatka Peninsula. Alaska shown by a group of islands off the coast of Russia, identified as Isole Alessiane.

1778 Map​
Finely colored map of the world on Mercator's projection, showing the tracks of Captain James Cook's first voyage and shows the "Corean Sea". The map shows a number of fascinating details along the Northwest Coast of America, including:

1781 Map​
Rare map of the Northwest Coast of America and Northeast Coast of Asia, showing Cook's Tracks through the Pacific. This map is an updated version of the map which originally appeared in Philippe Buache's rare work, Considerations géographiques et physiques sur les nouvelles découvertes au nord de la grande mer, appellée vulgairement la Mer du Sud, published in Paris 1753-54, one of the rarest and most influential works on the discoveries along the Northwest Coast of America in the mid-18th Century.

Source
​
What I also find interesting about some of the above maps is the fact that some of them have nautical routs going from the Chinese and Russian Tartaries to the west coast of the future United States states of Alaska, Washington, Oregon and California.

So, naturally thinking about this time gap between when east/west American cities/states were founded. Why do we have this time gap? What forces were guarding the western side of the North American continent to prevent it from being occupied by the "Declaration of Independence" Americans? And I think there could be a hypothesis to be made. Before I voice my opinion, there is one more interesting fact to be mentioned.

Anti-Chinese Activities​
Now and then we would run into info about those mysterious Chinese smuggling tunnels, as well as other information pertaining to the 19th/early 20th century US West Coast Chinese laborers. Officially the cheap work force inundated Western United States coast starting with approximately 1850s. I guess the California Gold Rush which started in 1848 could be a more accurate date. Here is what we have.


LA Chinese massacre of 1871​
The Chinese massacre of 1871 was a race riot that occurred on October 24, 1871, in Los Angeles, California, when a mob of around 500 white and mestizo persons entered Chinatown and attacked, robbed, and murdered Chinese residents. The massacre took place on Calle de los Negros (Street of the Blacks/Black Street) also referred to as "Negro Alley". The mob gathered after hearing that a policeman had been shot and a rancher killed by Chinese. An estimated 17 to 20 Chinese immigrants were hanged by the mob in the course of the riot, but most had already been shot to death. At least one was mutilated, when someone cut off a finger to get his diamond ring. Ten men of the mob were prosecuted and eight were convicted of manslaughter in these deaths. The convictions were overturned on appeal due to technicalities. 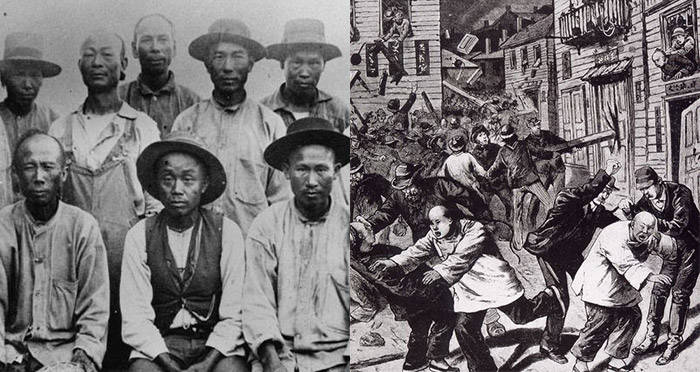 Discrimination had been rising against the increasing number of Chinese immigrants living in California. It has been described as a root cause of the massacre. White and mestizo residents of Los Angeles resented the expansion of the Chinese population, considering them an alien group. In 1863 the state legislature had passed a law that Asians (defined as Chinese, Mongolian, Indian, etc.) could not testify in court against whites, making them vulnerable to abuse and injustice, and putting them beyond reach of the law. 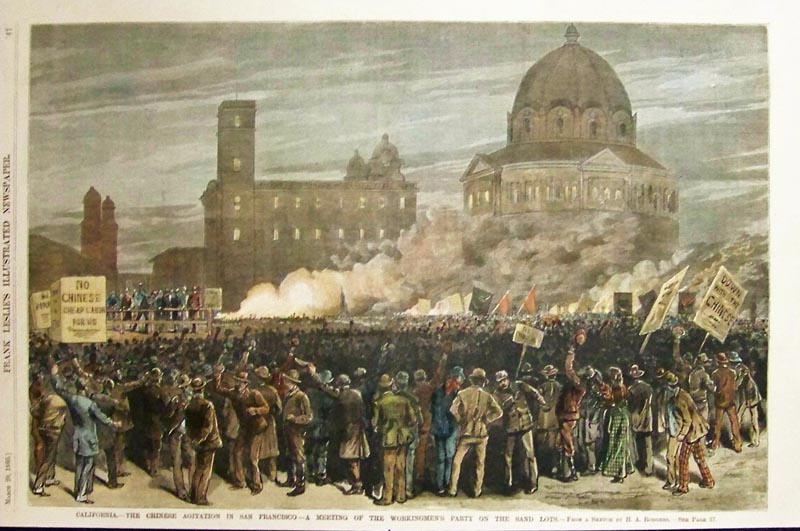 From 1873 through the rest of the 1870s a severe economic crisis swept the United States of America known to history as the Long Depression. Economic contraction in the eastern United States proved the motivation for many to pull up stakes and try to reestablish themselves in the West coast mecca of California. Indeed, between the years 1873 and 1875 an estimated 150,000 workers made their way to the "Golden State," many of whom settled in the state's only metropolis, San Francisco.


Vancouver, CA anti-Chinese riots of 1886​
The Vancouver anti-Chinese riots of 1886, sometimes called the Winter Riots because of the time of year they took place, were prompted by the engagement of cheap Chinese labour by the Canadian Pacific Railway to clear Vancouver's West End of large Douglas fir trees and stumps, passing over the thousands of unemployed men from the rest of Canada who had arrived looking for work.
In January 1886 Chinese workers were camped on the shore of Vancouver Harbour, near the present north end of Burrard Street. Chinese were hired to clear the trees and stumps then still standing in Vancouver's West End, at the usual much lower rate paid to Chinese labour. In January 1886, an angry mob of whites, who had been unemployed and hungry for weeks with no work and angered that potentially-available employment and payscales were undercut by Chinese labour, stormed the Chinese camp in the West End at night, then camped in their tents. Many were injured, and some fled into the icy sea to escape their assailants.


Seattle anti-Chinese riot of 1886​
The Seattle riot of 1886 occurred on February 6–9, 1886, in Seattle, Washington, amidst rising anti-Chinese sentiment caused by intense labor competition and in the context of an ongoing struggle between labor and capital in the Western United States. The dispute arose when a mob affiliated with a local Knights of Labor chapter formed small committees to carry out a forcible expulsion of all Chinese from the city. Violence erupted between the Knights of Labor rioters and federal troops ordered in by President Grover Cleveland. The incident resulted in the removal of over 200 Chinese people from Seattle and left 2 militia men and 3 rioters seriously injured. 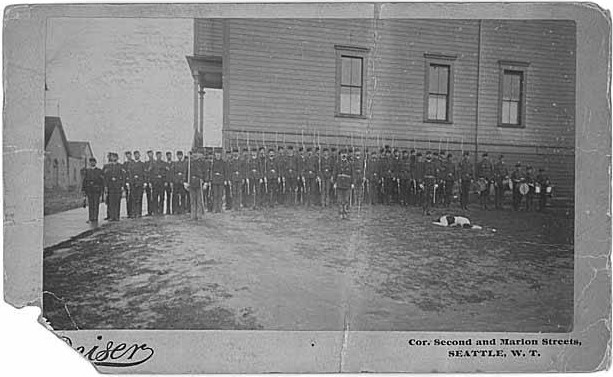 Military troops after the Anti-Chinese Riots, Seattle, February, 1886
​
In the mid-1880s, soldiers were called to the neighborhood around Main Street and what was then still Second Avenue (now Occidental) in downtown Seattle to deal with anti-Chinese agitation. 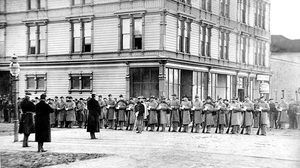 During the 1840s, the California Gold Rush brought many Chinese to the United States. Many had come in the hopes of improving their economic conditions, and their arrival was initially welcomed due to labor shortages. According to information from the U.S. Census, the Chinese population increased at a dramatic pace until 1890, though they never accounted for more than 0.2 percent of the U.S. population through the 1800s.

After the Gold Rush, many Chinese people moved into the northwest territories of Oregon, Washington, and Montana in search of work, especially with the new mining opportunities and railroad expansion. The Chinese workers developed a reputation for being efficient and willing to work long hours, but also for accepting less pay than white workers. This increased racial tensions in the West, as companies recruited Chinese workers in order to undercut higher-paid white workers.

Violent outbreaks against the Chinese occurred as early as the 1860s and continued to intensify in the 1870s, especially in California. As corporations continued to flood the labor market with Chinese workers, many Chinese were excluded from or refused to join unions in the fight against capital, which angered and threatened the white European immigrants who constituted these organizations. Unions such as the Knights of Labor and the American Federation of Labor supported legislation that limited or excluded Chinese immigration. By the mid-1880s, a wave of anti-Chinese violence grew and spread into the Pacific Northwest.


1885 Chinese expulsion of Tacoma​
The Tacoma riot of 1885, also known as the 1885 Chinese expulsion of Tacoma, involved the forceful expulsion of the Chinese population from Tacoma, Washington Territory, on November 3, 1885. City leaders had earlier proposed a November 1 deadline for the Chinese population to leave the city. On November 3, 1885, a mob that consisted of prominent businessmen, police, and political leaders descended on the Chinese community. The mob marched Chinese residents to a railroad station and forced them to board a train to Portland. In the following days, the structures that remained in the Chinese community were razed. The event was the result of growing anti-Chinese sentiment and violence throughout the American West. 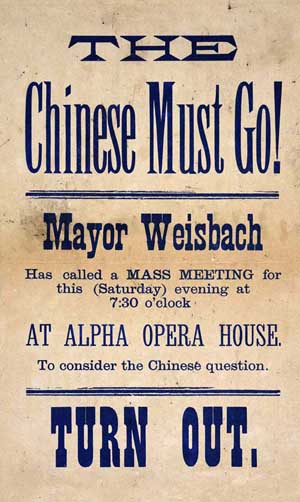 This organized action became known as the "Tacoma method", and despite national and international outcry, it was used as an example of how to forcibly remove Chinese residents from cities and towns throughout the American West. The anti-Chinese sentiment in Tacoma and Washington Territory more broadly made it so that those involved did not face repercussions for their actions.

KD: Now I'm gonna try to formulate my hypothesis related to all of the above, and then some.
P.S. We need to remember that Cortes and Pizzarro accompanied by a few soldiers, and armed with allegedly inferior weapons, had no issues conquering millions of Aztecs and Incas. They did so in the beginning of 16th century.

Our narrative compliant indigenous population (Indians per Columbus) of the future United States either had to have some very advanced arrows and tomahawks, allowing for a very effective defense of their territories, or... or the narrative is bogus.