Question | 1862 San Francisco Giants: what is he talking about?

Ran into the below video. I don't think I understand what the guy is talking about.

Here is this photograph: Montgomery looking south from California Street (1862) 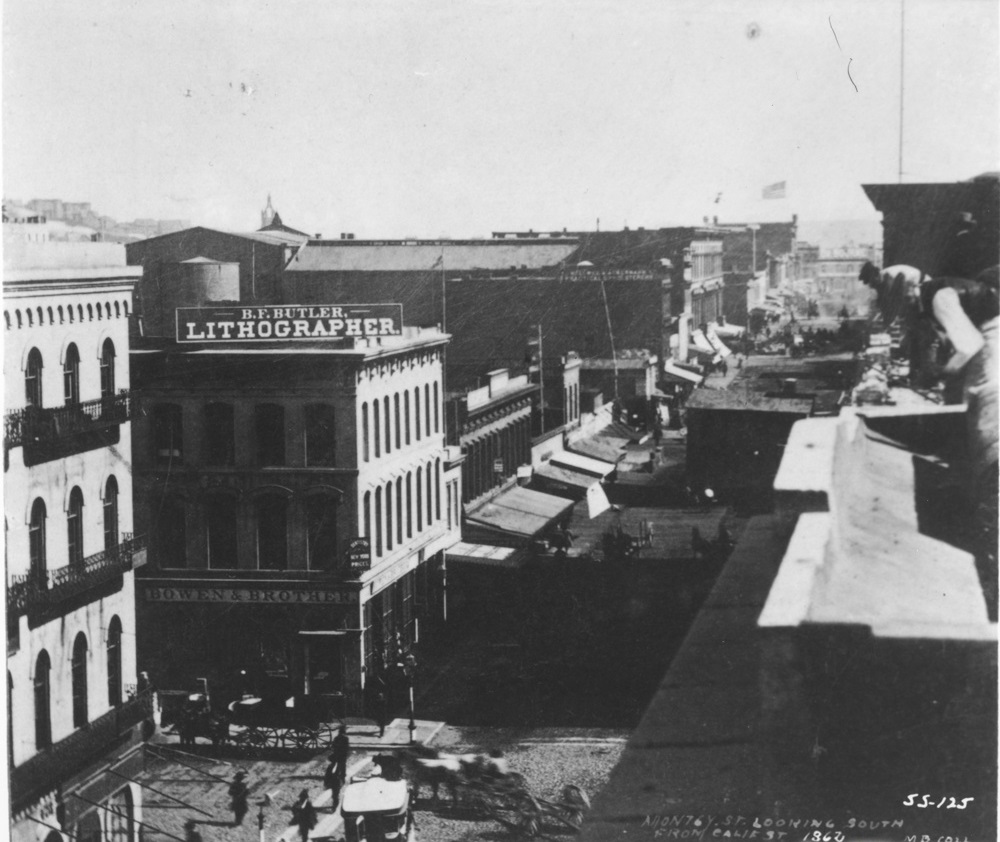 ​
I guess the gentleman followed up with a phone call to the public library. Apparently the author of the videos thinks that this is not a city but a model, and these two guys in the right top corner are as big as buildings, and in some instances are even bigger. Essentially it is claimed that they are working on getting the city model set up.

KD: What do you guys see? I see two normal guys working on a roof of a building.

Korben, no doubt it's just perspective.
The man who took the picture is clearly next to them in the same building.
Upvote 0

I'm inclined to agree. Maybe not "no doubt" but it seems like the most plausible explanation. A set is a possibility, I discount the giant option here... a lot of the circumstantial evidence surrounding giants involves asking why our buildings were so large. However, the "apparent size" of our "giants" here would make them unable to fit into any old buildings. Basically I could see perhaps giants of 10 to 15 feet tall accounting for large doors and high ceilings, but not too much larger than that.

I do feel like some old photos are "recreations" or even photographs from re-enactments, but that is obviously really hard to validate.

This guy's video is a bit hard to watch, with the loud movie trailer music playing. Plus, his speculation that the San Francisco Giants baseball team being named that for actual giants is a bit off the mark, as they got their name from the New York Giants baseball team that relocated. What is potentially interesting is that it isn't exactly clear why/when the New York team got their nickname (originally called the "Gothams"). It has been claimed that they were named after a quotation from their manager after a big win in 1885, but the link below shows that the nickname was in use prior to the manager's statement:
The history of baseball is an interesting study in general, as there are many apocryphal stories surrounding its early years and even now, the actual creator and timeline is heavily disputed. I personally think it's appropriate that America's pastime is cloaked in mysterious origins.
Upvote 0
You must log in or register to reply here.
Similar articles