Underground Seattle - How and When did it get Buried

Ended up driving to Seattle to take a look at some of the Pioneer Square area buildings. And while the main purpose of my Seattle visit was to verify a few things pertaining to the Sinking Ship parking garage, walking the streets made me think about something else.

The Seattle Underground​
Here is the narrative. The Seattle Underground is a network of underground passageways and basements in downtown Pioneer Square, Seattle that were at ground level when the city was built in the mid-19th century. After the streets were elevated, these spaces fell into disuse, but have become a tourist attraction in recent decades.
KD: I think that photographic evidence does not match the buried structures.


My Understanding​
The narrative tells us, that at some point after 06/06/1889, Pioneer Square area streets were buried for the purposes of whatever. The actual purpose is irrelevant for this article. The after-fire remains of the buildings were to be buried, that's what important. Naturally, the only buildings they could bury after 06/06/1889, were the remains of the buildings they had prior to the Great Seattle Fire.

Pre-Fire Pioneer Square​
Below, we Yesler Way at the intersection with 1st Avenue. We are looking east toward the Occidental Hotel. On the left you can see the Yesler-Leary Building. And this is a photograph dated with 1888. 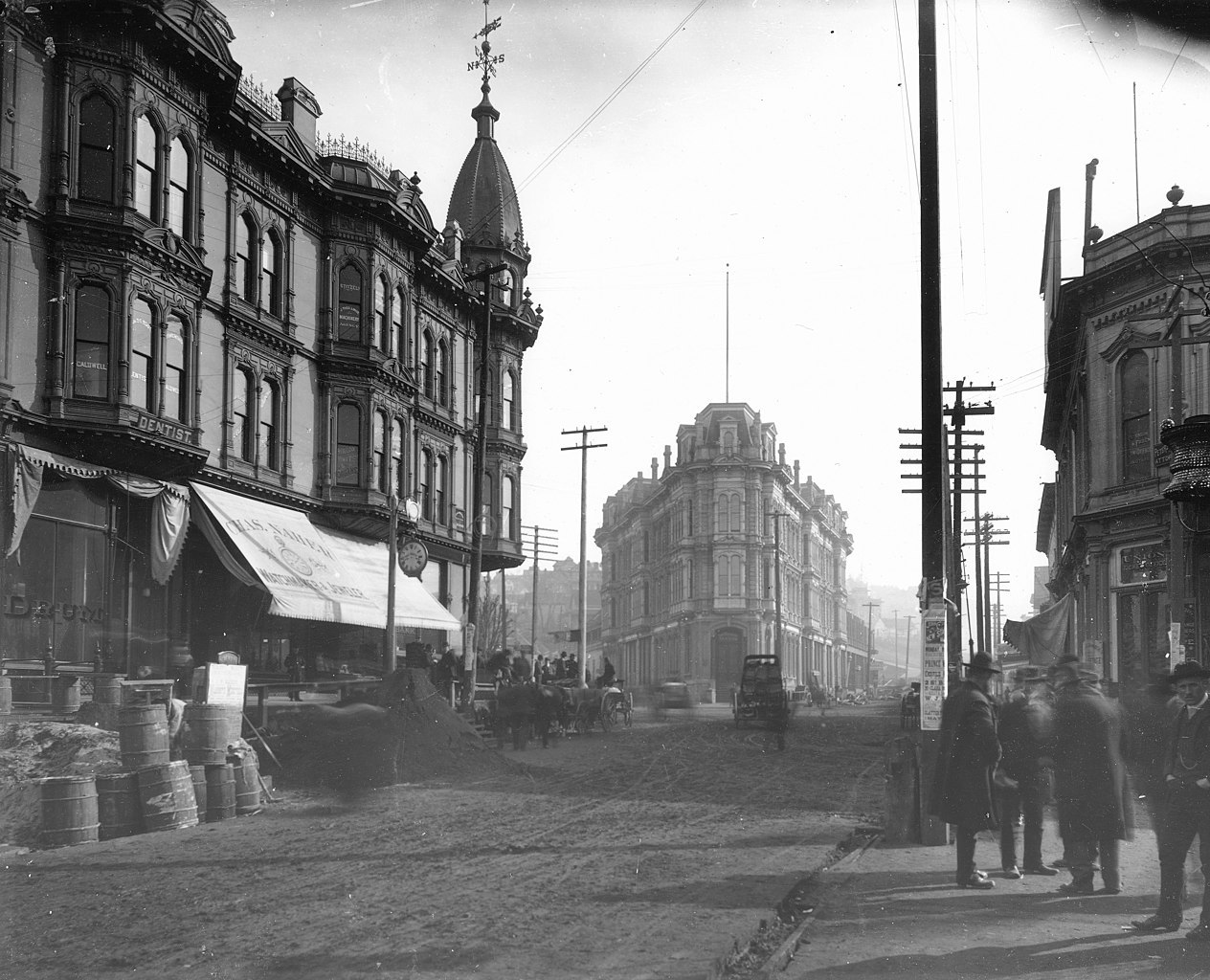 Source
​
On the below photograph, allegedly made circa 1887, the photographer was standing in the middle of Yesler Way and 1st Avenue intersection. We are looking North. To our right (we can't see it) is the Occidental Hotel. In 1887 this hotel was already fully functional. 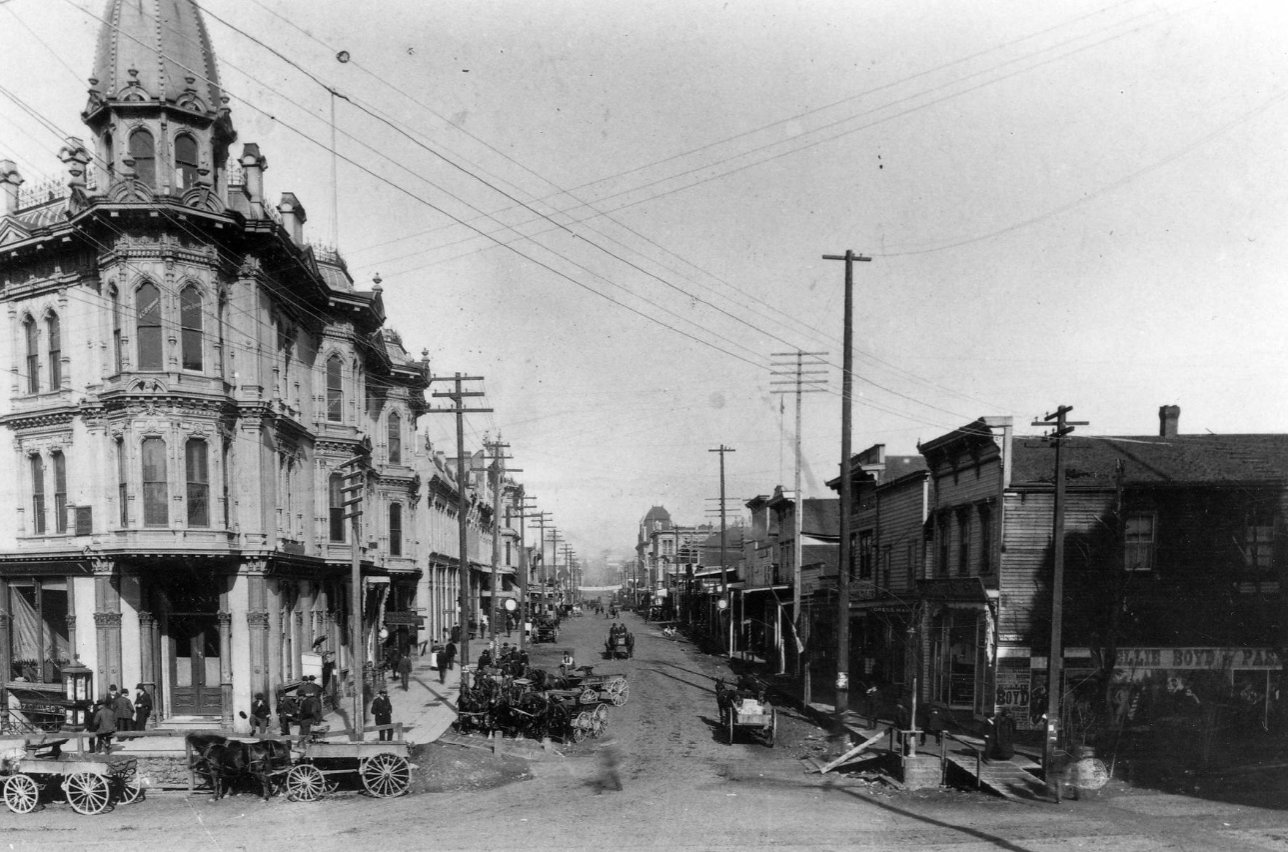 Source
​
The next photograph was allegedly taken on 05/06/1889. That would be one day prior to the great Seattle Fire. On the right you can see the Occidental Hotel. On the far right is the Yesler-Leary building. 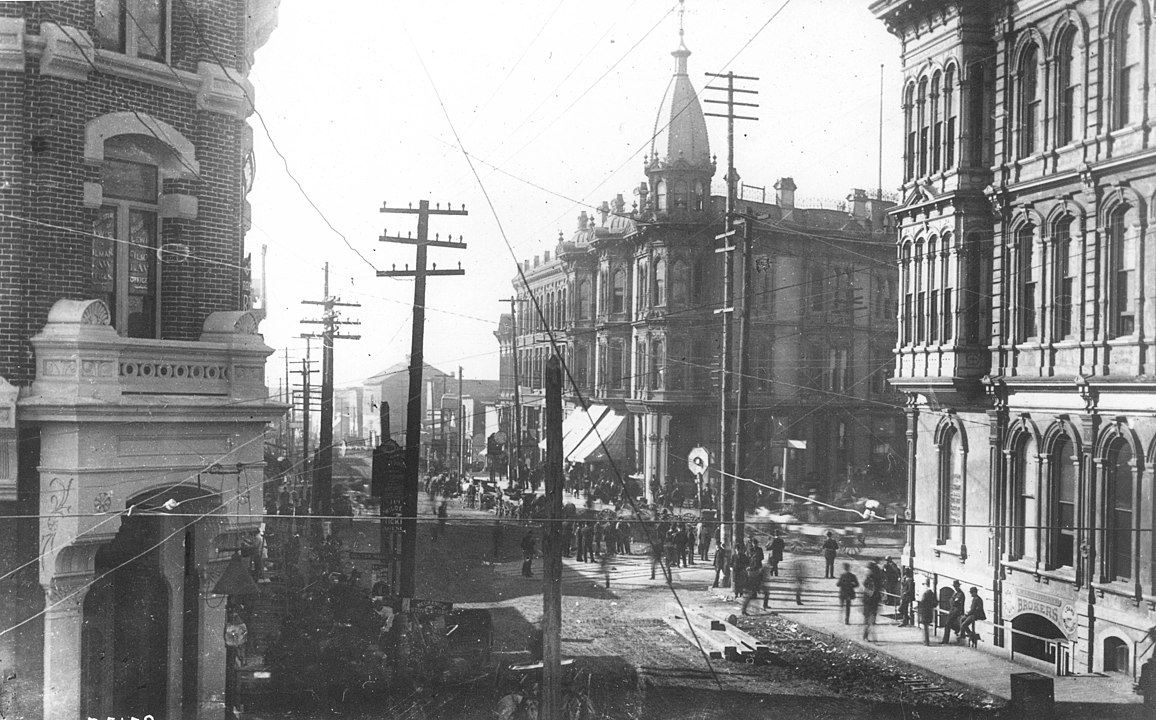 Source
​
Below, we are looking south on 1st Avenue (former Front street). We are standing at 1st Ave. and Marion street intersection. I am not sure what year is being claimed for this image, but we can see the Yesler-Leary building at the end of row of buildings on the right. The Yesler-Leary building was allegedly built in about 1883, so it's some time after that. 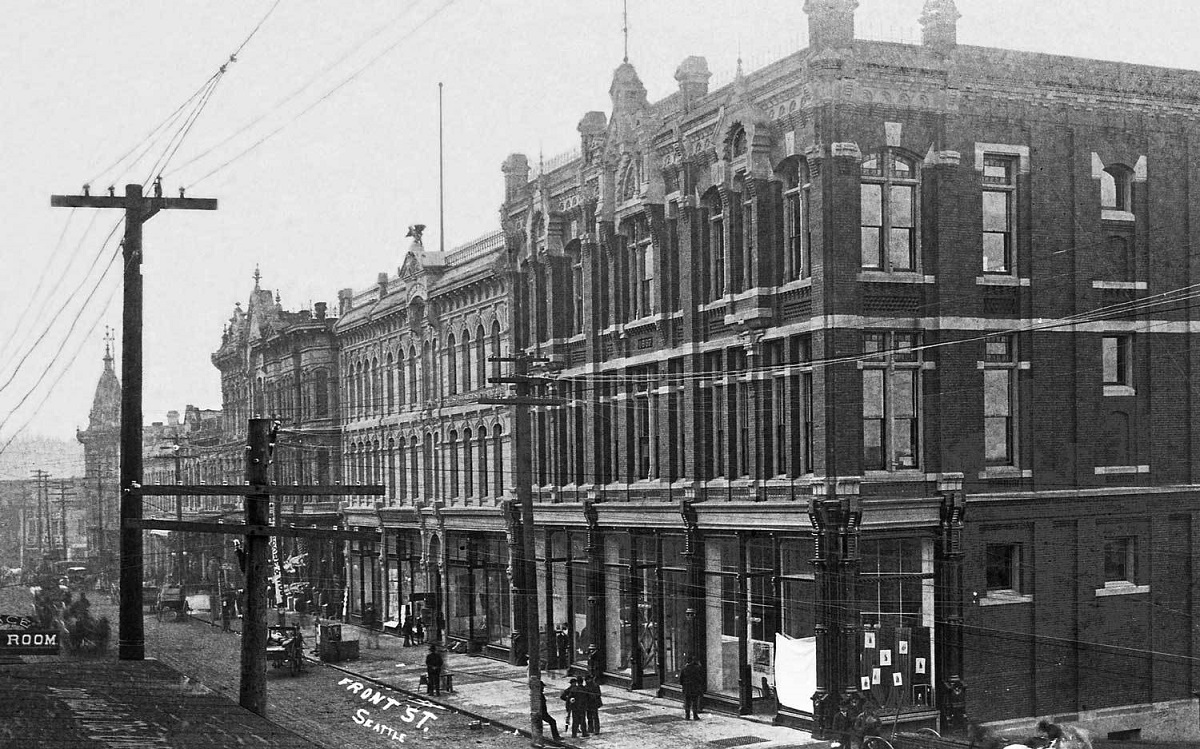 After the Great Fire​
Any inspection of the post-fire photographs will confirm that the entire area was more or less annihilated. The destruction was spectacular, and can be compared to Hiroshima and Nagasaki. 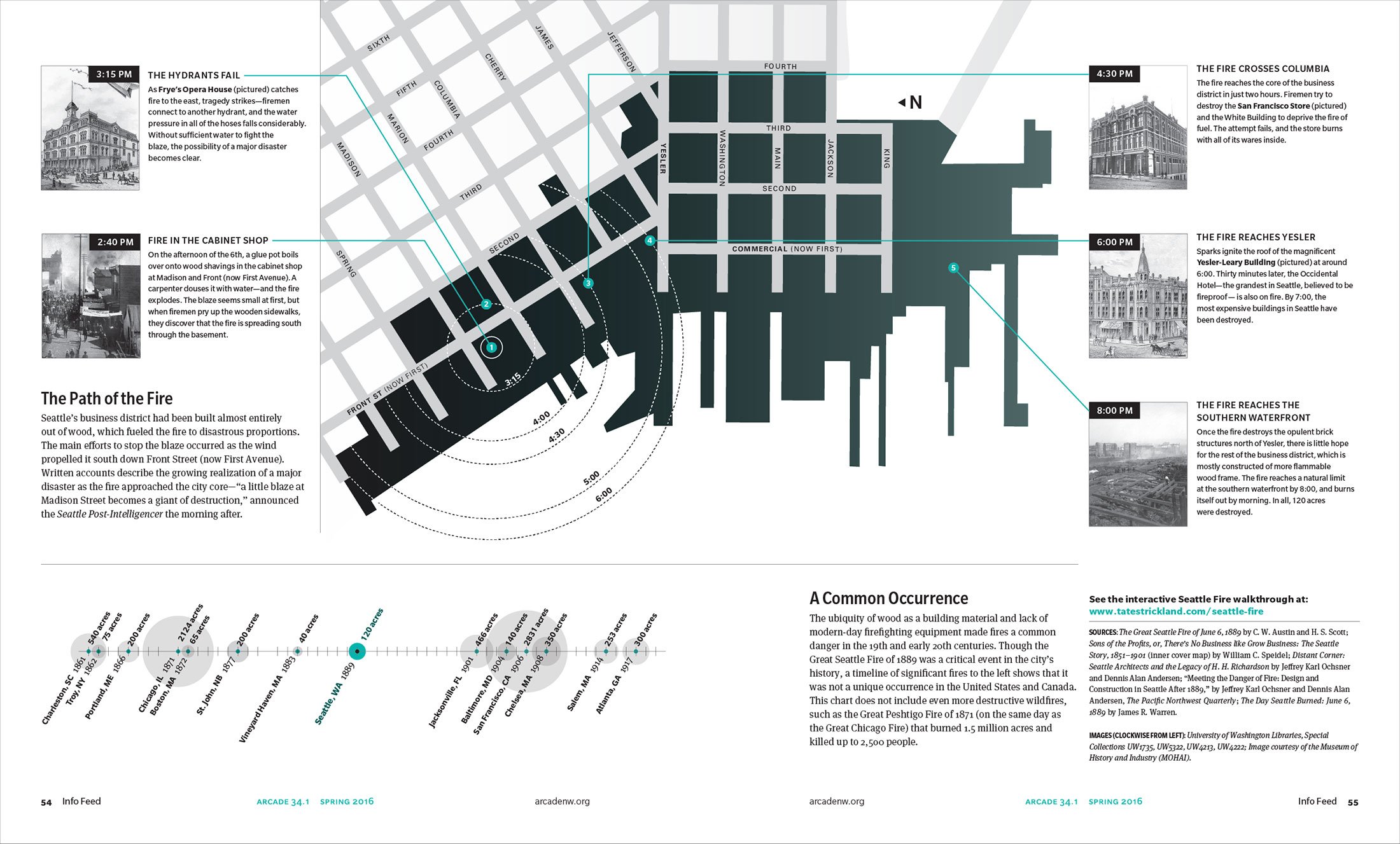 Source
​
Here, we are looking South-East towards the Occidental Hotel. I think we are standing on the 1st Avenue, formerly known as Front Street. 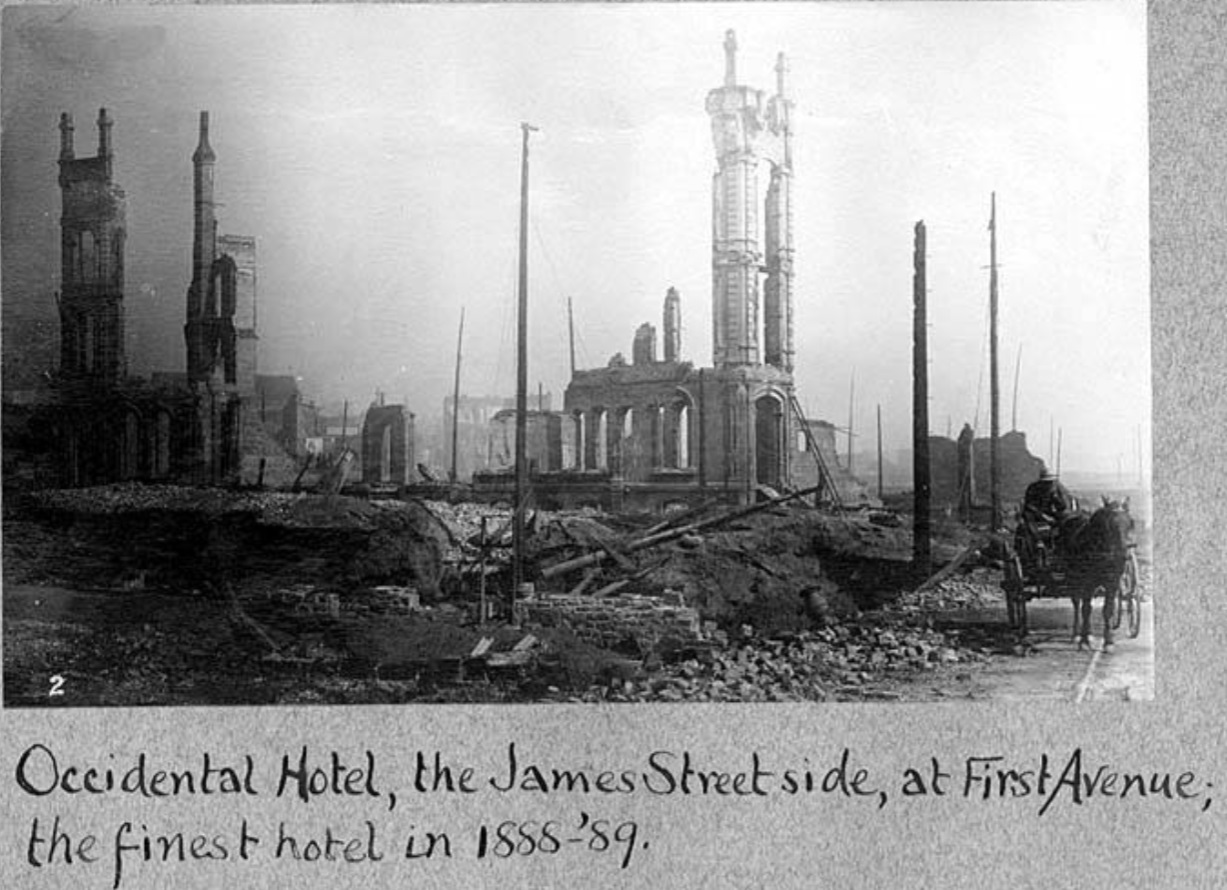 Source​
According to what we can read here, we are looking north on 1st Avenue. The ruins on the left are that of the Frye Opera House. Essentially, this is 1st Avenue and Marion Street. 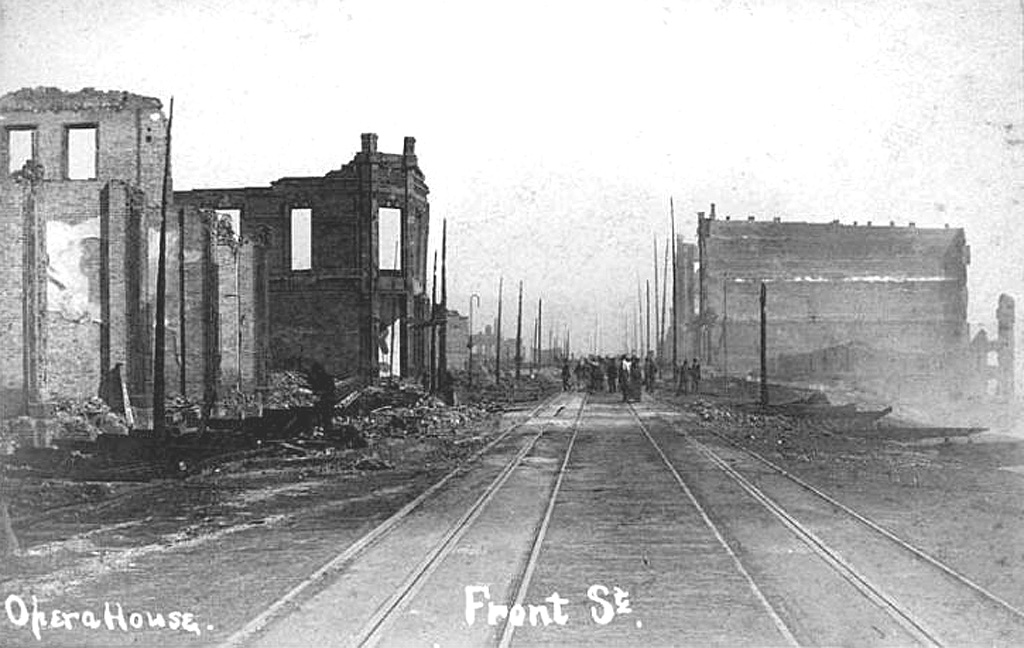 ​
I am not sure where the First National Building was, but this is what our Yesler-Leary Pioneer Square area structures looked like after the fire. 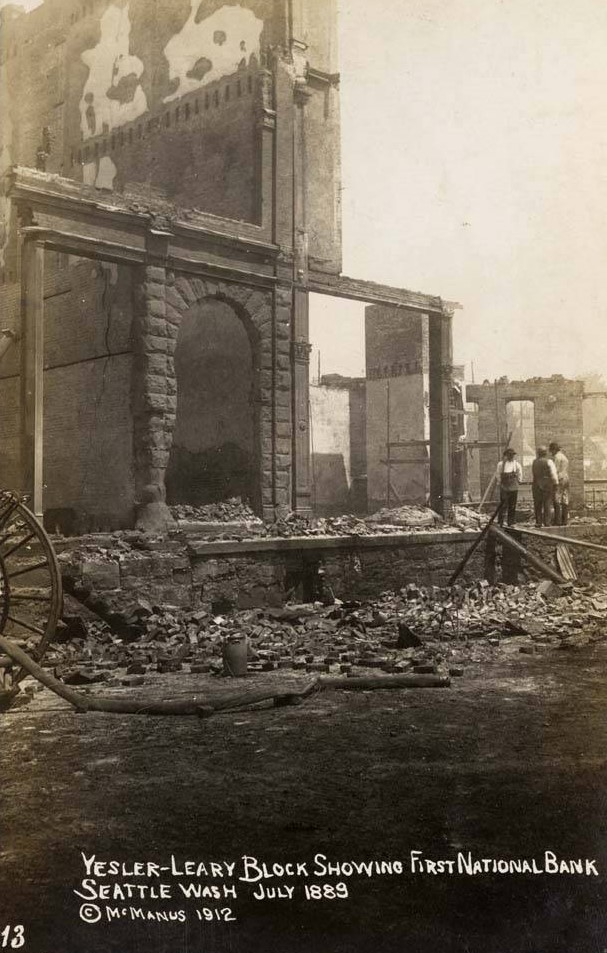 Source​
The exact location of the below photographs is unknown, but we are looking west towards the Elliott Bay, and this image is indicative of the damages sustained by this area of Seattle.

Seattle Underground​
Now, it's been a few years since my last underground tour in Seattle. I vaguely remember entrance points to the underground, but the below map is more or less what happened during my visit. 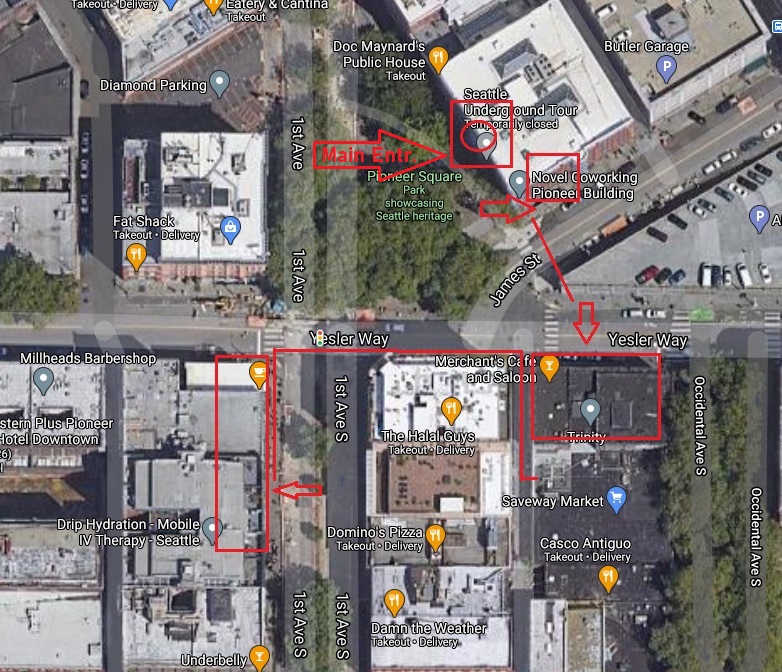 ​
Once we get down there, what exactly do we see? Instead of the former above ground city destroyed by the Great Seattle Fire we see the following. 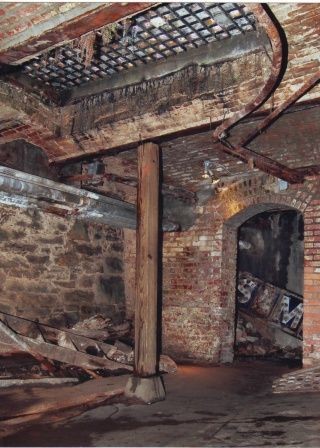 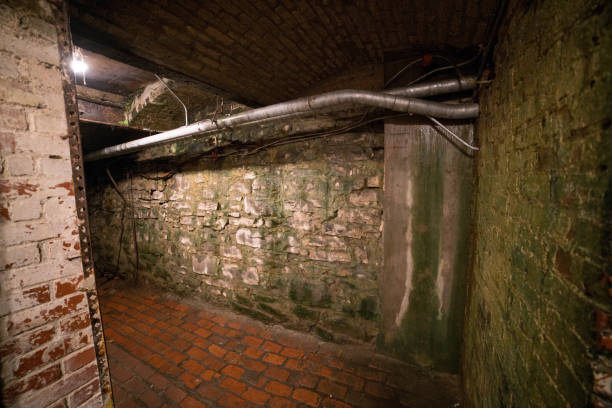 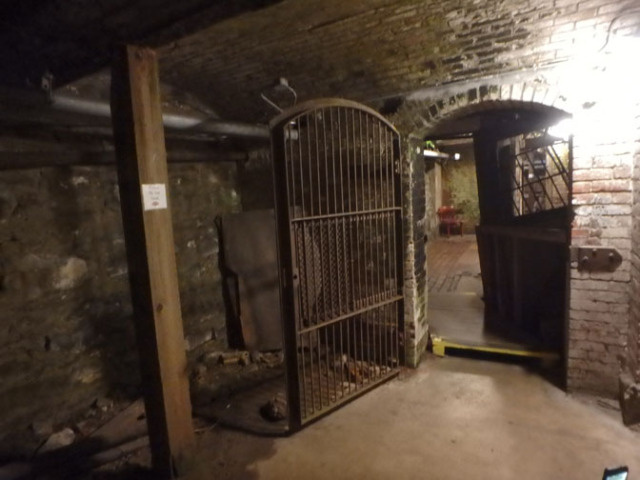 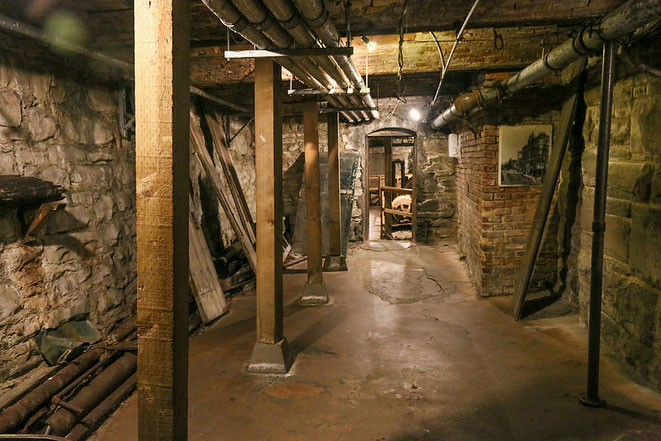 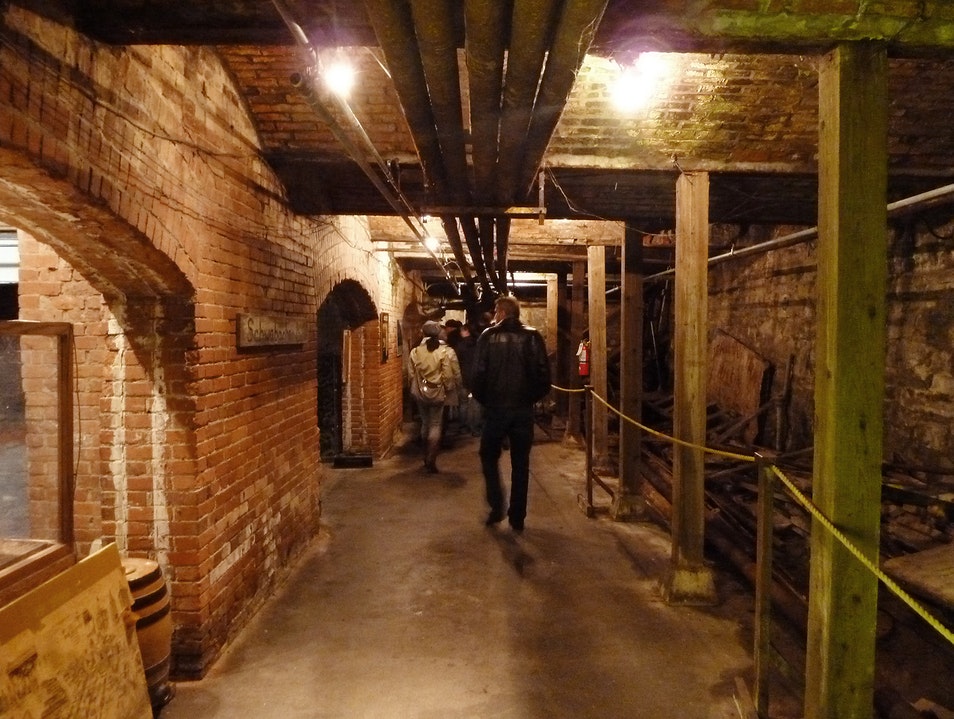 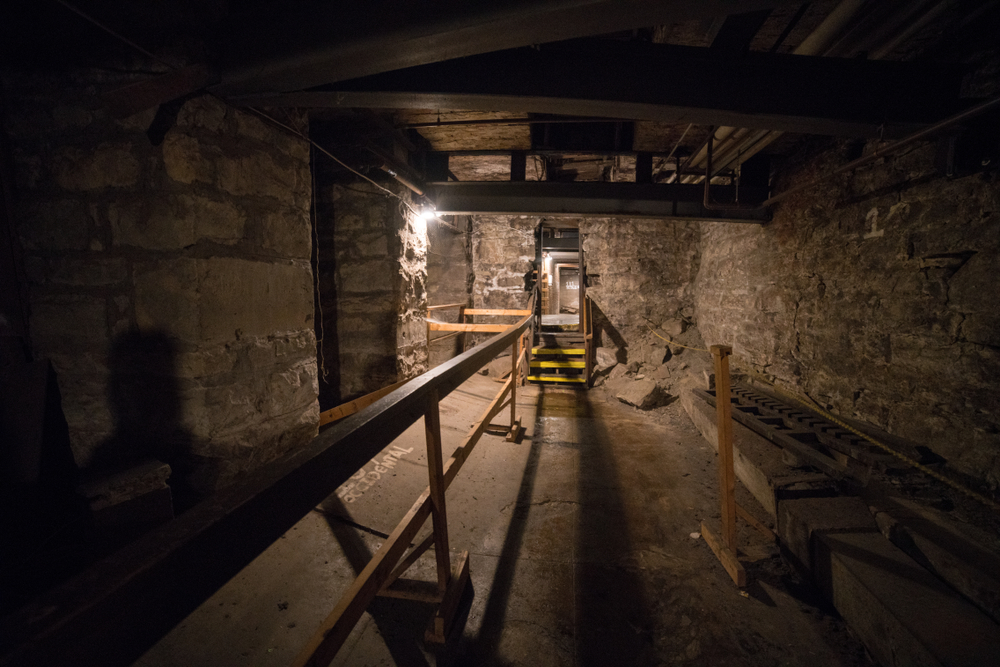 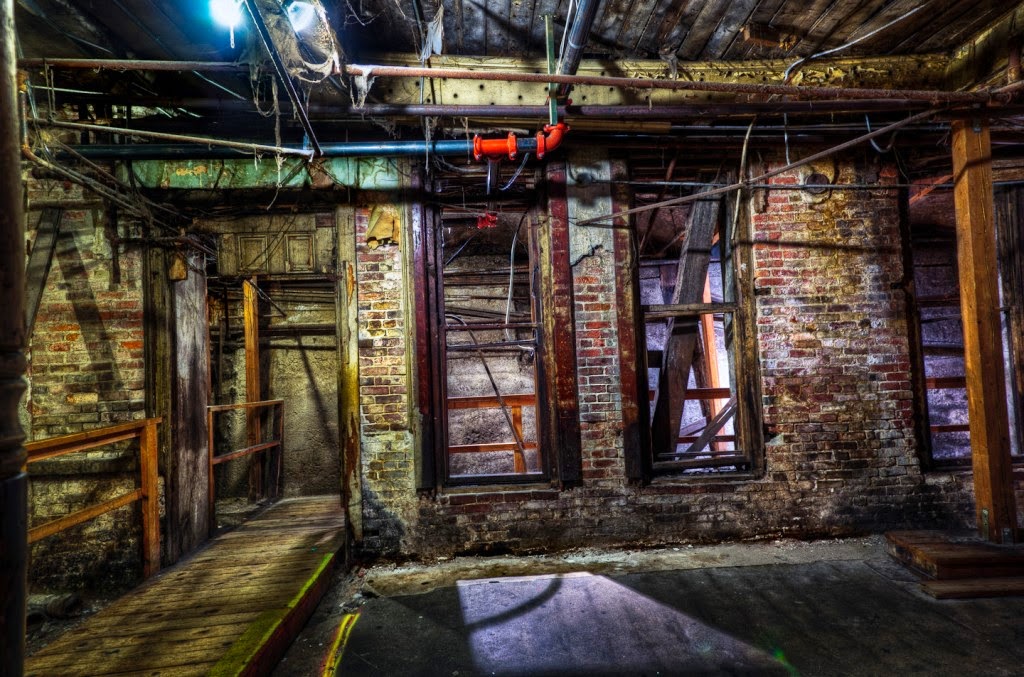 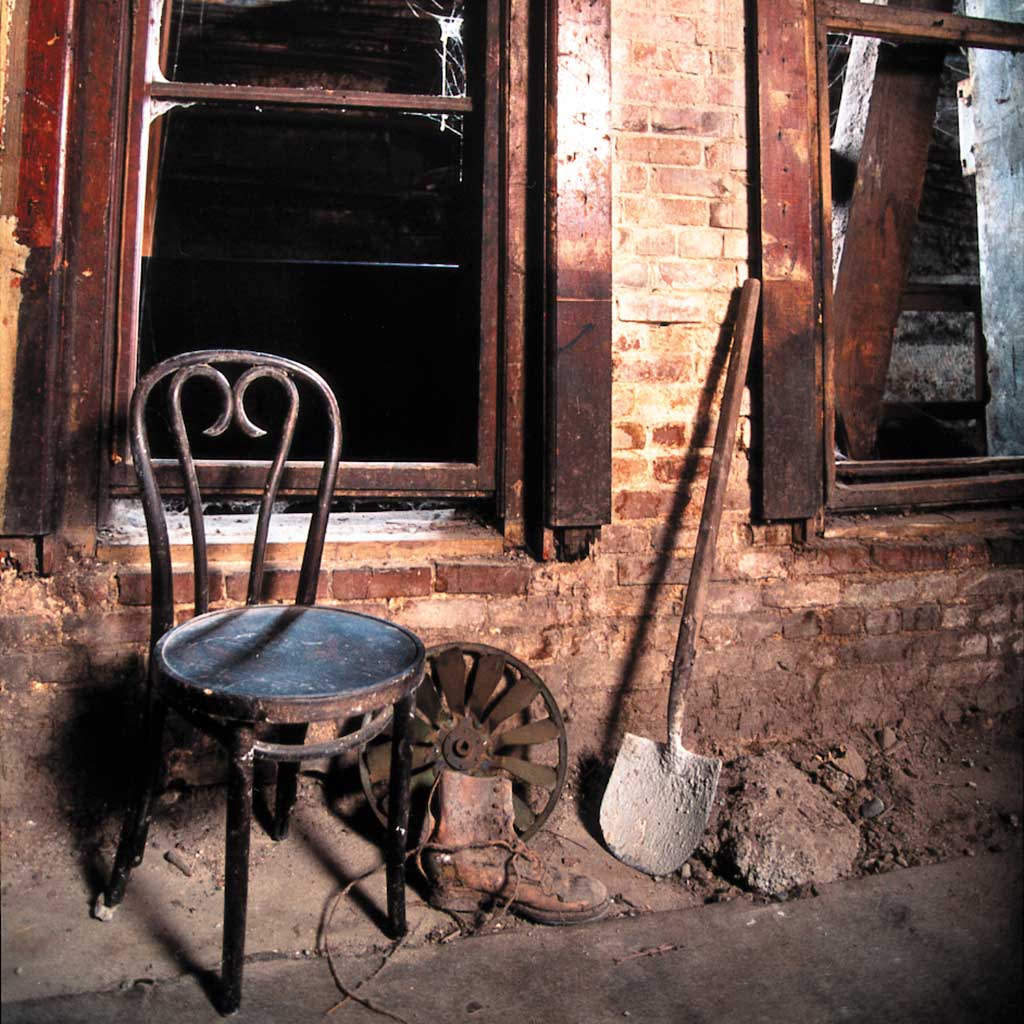 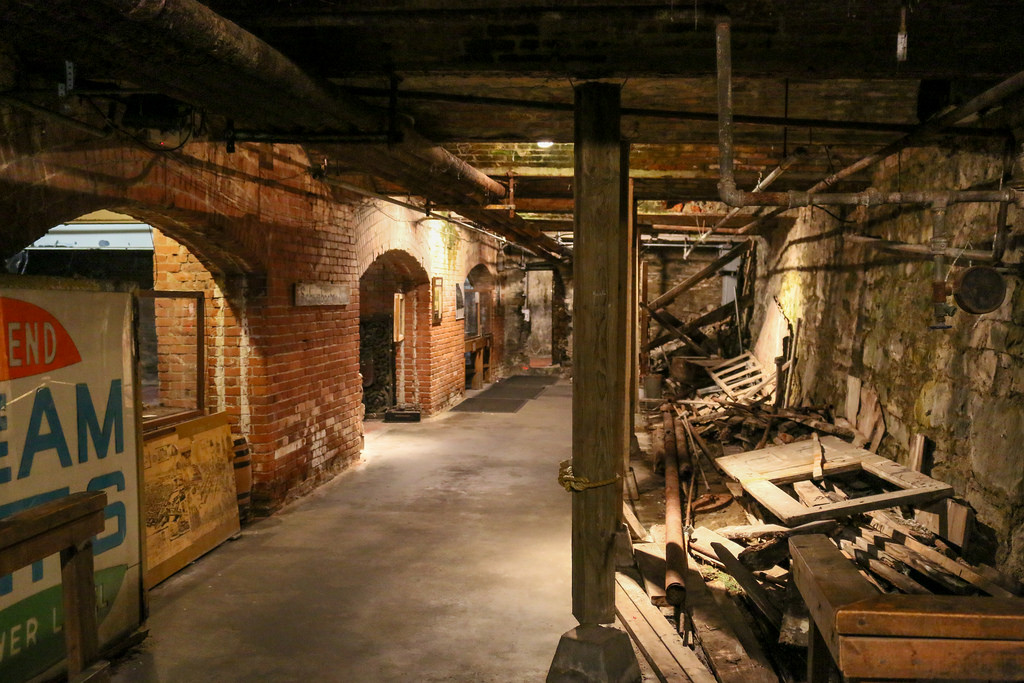 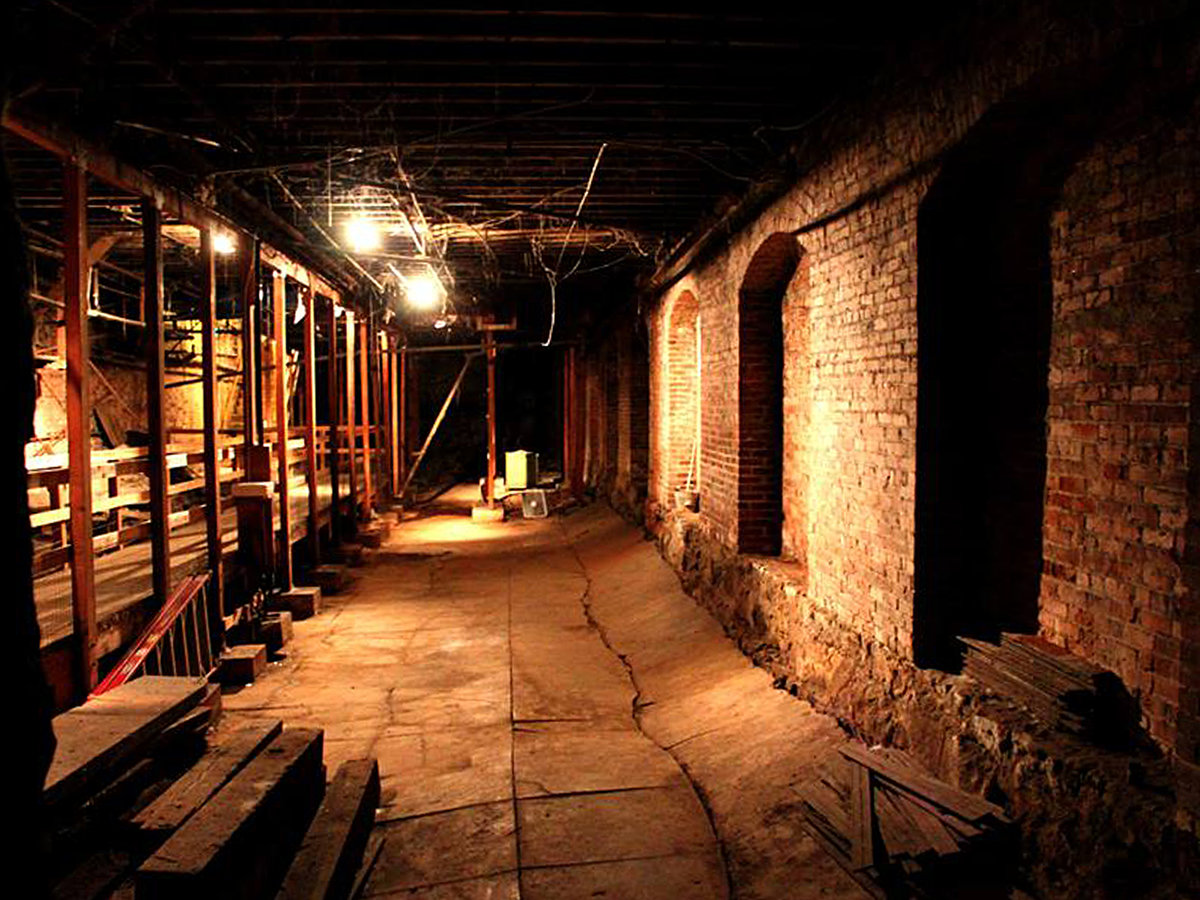 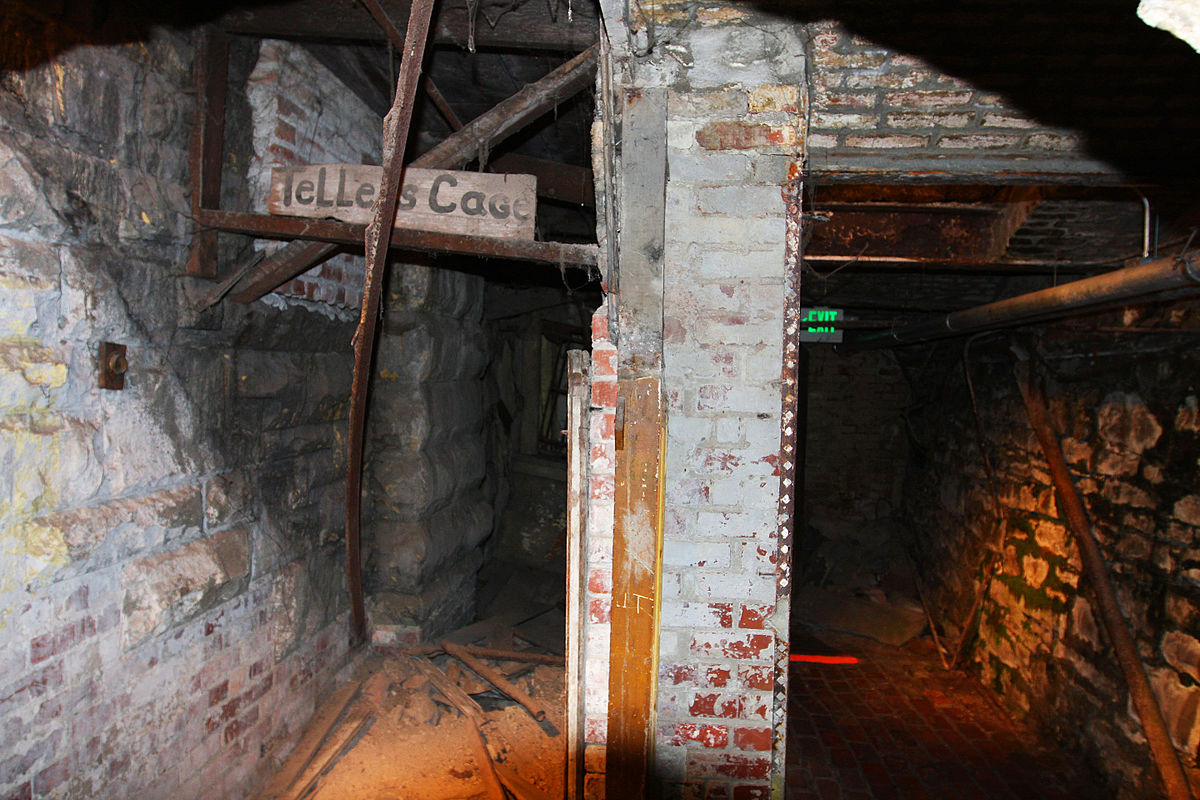 ​
KD: I am not sure that what we are being shown below, matches the houses destroyed during the Great Seattle Fire of 1889. In other words, I think these are completely different buildings.

Pavement Lights​
Pavement lights (UK), vault lights (US), floor lights, or sidewalk prisms are flat-topped walk-on skylights, usually set into pavement (sidewalks) or floors to let sunlight into the space below. They often use anidolic lighting prisms to throw the light sideways under the building. They were developed in the 19th century, but declined in popularity with the advent of cheap electric lighting. Older cities and smaller centers around the world have or have had pavement lights. Most such lights are approximately a century old, although lights are being installed in some new construction.

​
I walked around the downtown a bit, and ended up checking out a few buildings. What's interesting, we have these pavement lights in the areas where street level raising activities make little to no sense. There is no way regular tides can reach that far East.
1. Yesler Way and 2nd Avenue. 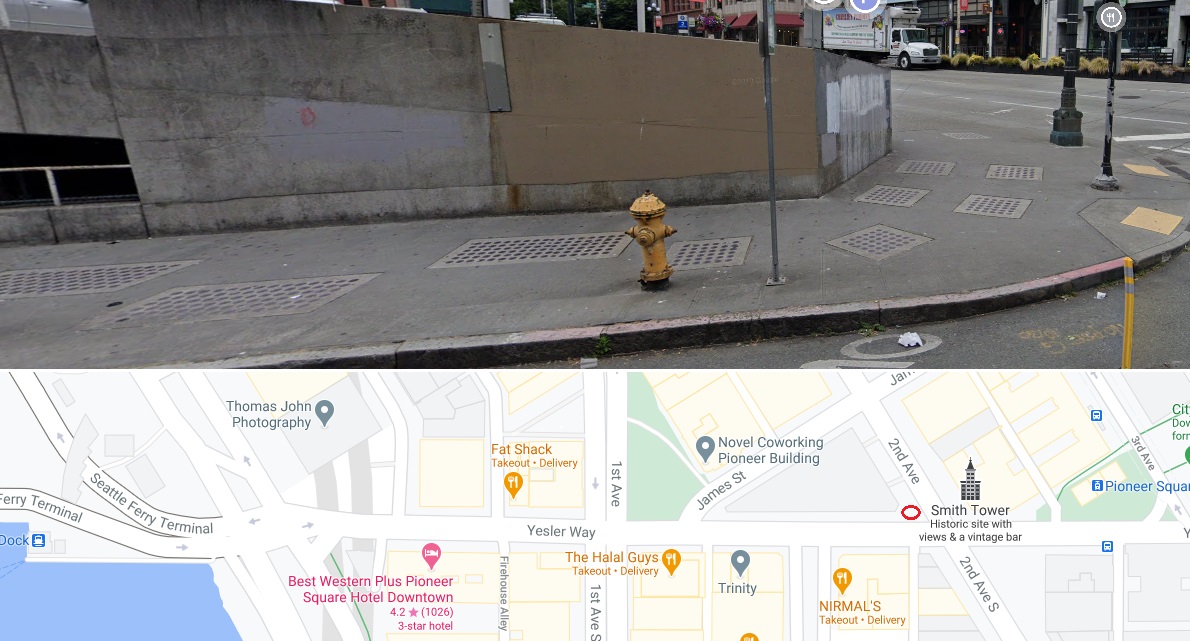 2. Jefferson Street and an alleyway between 2nd and 3rd Avenues. 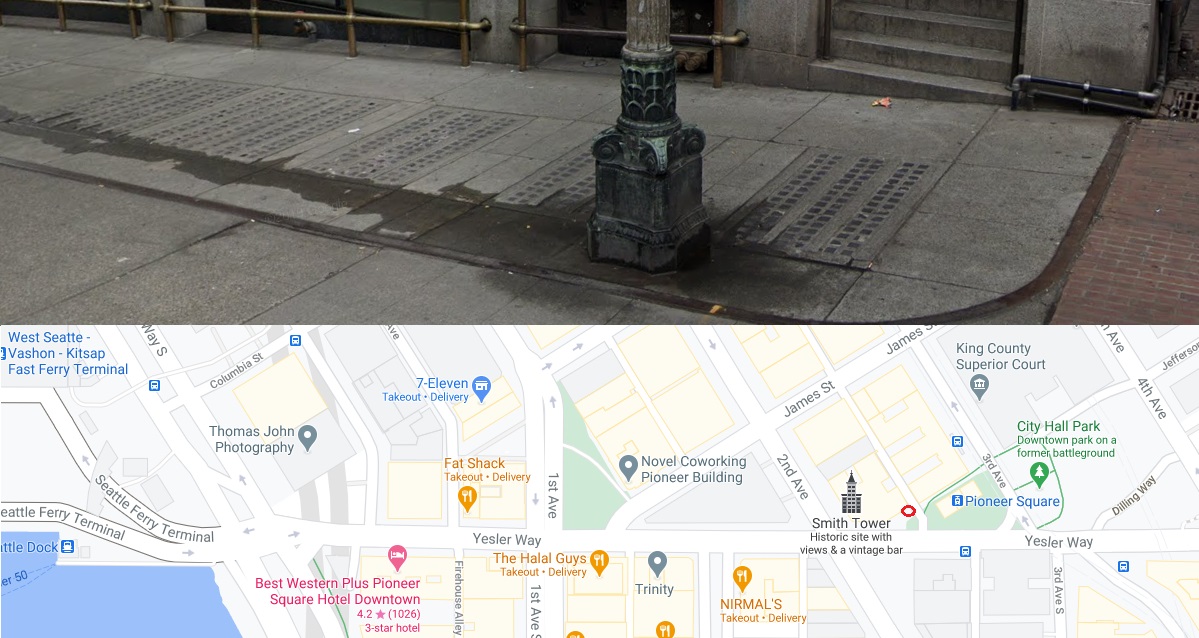 KD: I start to doubt that buildings we have buried below the Pioneer Square area are the same ones we see on the available pre/post Great Seattle Fire photographs. I definitely need to revisit the tour, but I do not recall seeing any definitive fire damages during my previous visits. From the photographs we know that this specific area got annihilated by the fire. 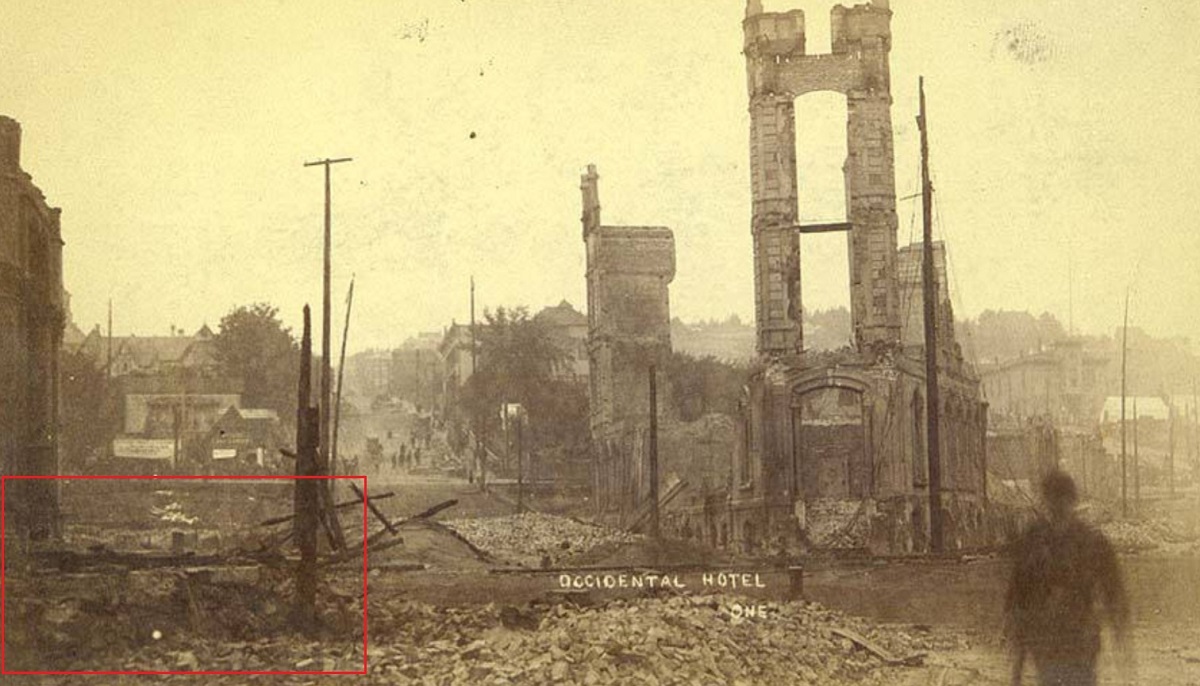 When did they stop wearing these uniforms, by the way? Were those still around in 1889? 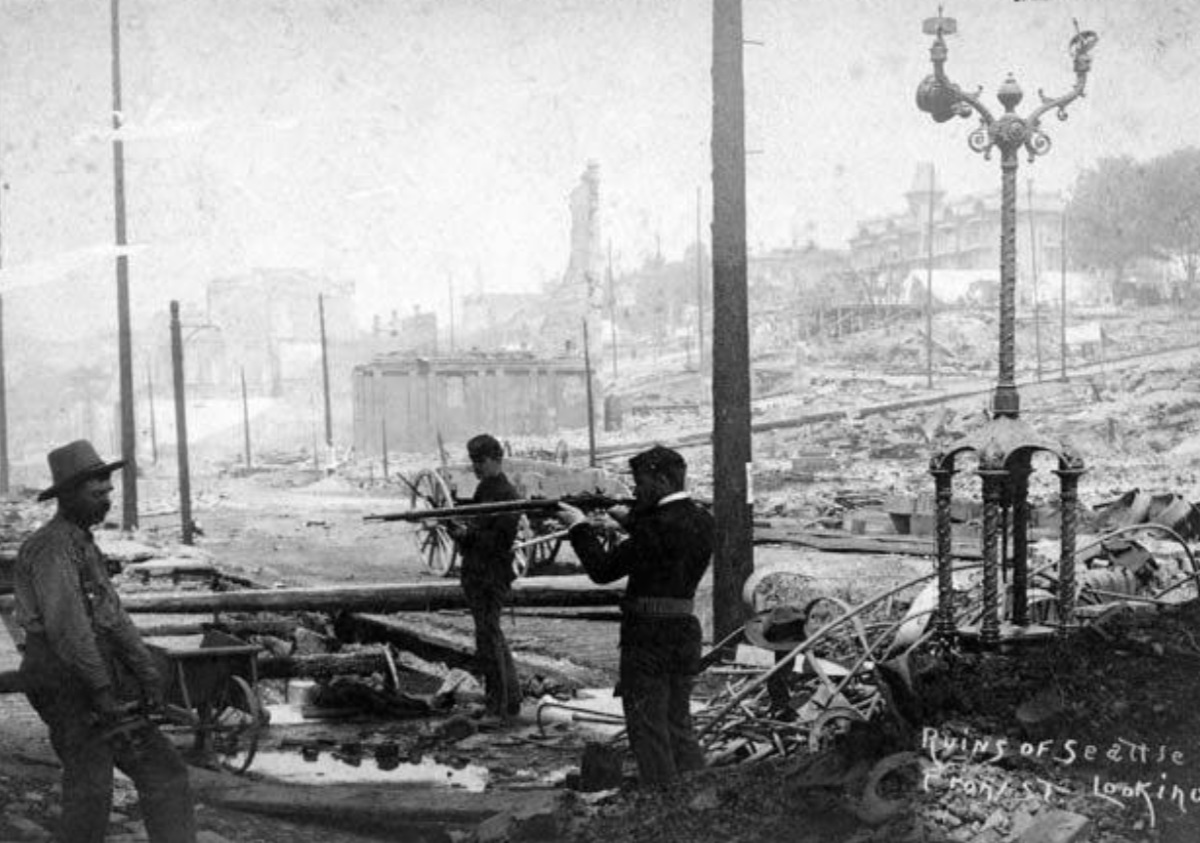