Personally, I would like to know why we have the following line (below red) in the wiki description of this 179 year old power source. The thing is still producing power: 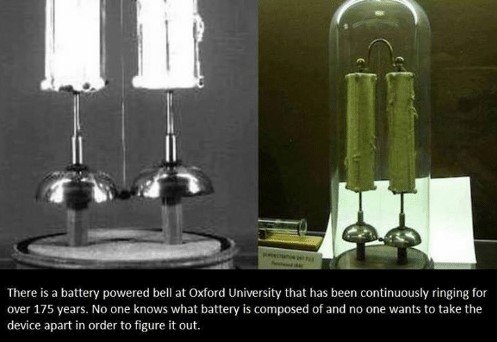 Found this link in my e-mail yesterday. Did some related Googling. Here is what we have.


Oxford Electric Bell​
The Clarendon Dry Pile was purchased by Robert Walker (Professor of physics 1839 - 1865) and bears the label in his handwriting "Set up in 1840", though a later note indicates that it may have been constructed some 15 years earlier. It consists of two voltaic "dry-piles", covered with an insulating layer of sulphur, connected in series and, at their lower ends, to two bells. Between the bells is suspended a metal sphere about 4mm in diameter which is attracted alternately by the bells and transfers charge from one to the other. The frequency of its oscillation is about 2Hz; so far the bells have been rung of the order of 10 billion times.

​
The internal construction of the piles themselves remains a matter for conjecture, but records of similar popular curiosities of the period e.g. Zamboni piles, indicate that they are probably of alternate layers of metal foil and paper coated with manganese dioxide.
Sources:

The contraption was purchased in 1840 by a clergyman-physicist named Robert Walker. But who made it?
Wiki article chose not to mention the alleged Watkin and Hill company. Sounds like Mr. Watkin and Mr. Hill were pretty smart guys:

KD: This entire story is utterly ridiculous. For God knows how long we have this "mysterious" power source. Nobody (allegedly) knows what's inside, and nobody is eager to find out. Really?