That's pretty monumental - 285 feet tall. Some interesting construction info is here. Apparently they started building it in 1888. The obelisk was completed by 1892, and the entire thing by 1901.

It was designed by German architect Bruno Schmitz. The monument's original purpose was to honor Hoosiers who were veterans of the American Civil War; however, it is also a tribute to Indiana's soldiers who served during the American Revolutionary War, territorial conflicts that partially led to the War of 1812, the Mexican-American War, and the Spanish-American War. The monument is the first in the United States to be dedicated to the common soldier.

And this Bruno Schmitz - appears so appointed... to do some restoration and redesign may be... 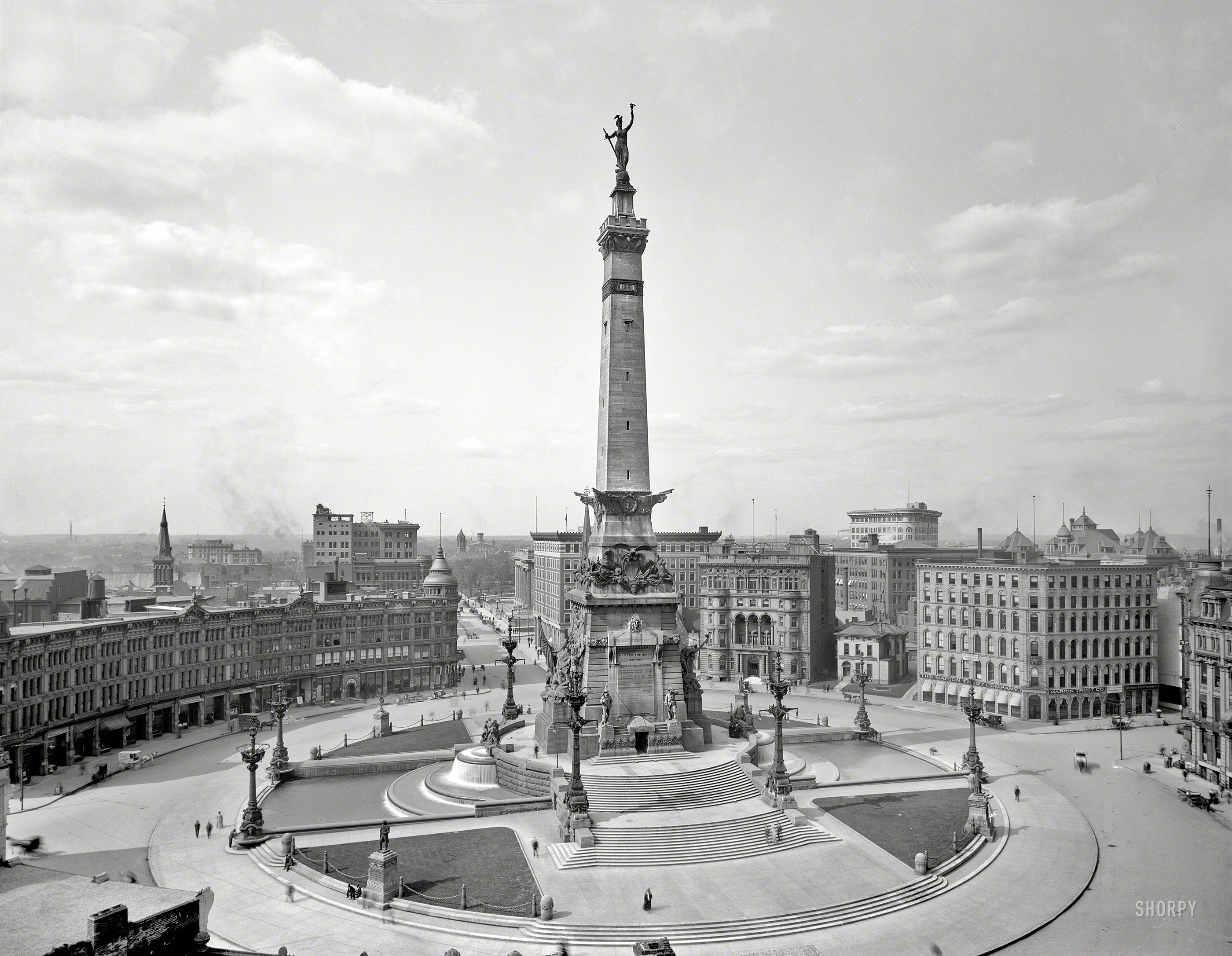 KD: Appears the US flag was not a big thing back then. I personally doubt it's 1907, but that's what the description said.
Click to expand...

Wow, I didn't even know this one existed. But I've only ever sped through Indiana... the view from the highways is so boring, I figure I need to get through it before I fall asleep. I would think that the TV probably has shown this to me during Colts home games, but obviously didn't convey the scale enough to lodge it into my long-term memory. As the wiki says:

That picture is incredible too. Crystal clear, aside from some of the motion blur and actually captures the sky really well.

The alleged architect's resume is pretty damn impressive as well. Funny the wiki made a comparison to the Statue of Liberty, because that's what I thought about this supposed work of his (the pedestal anyway): 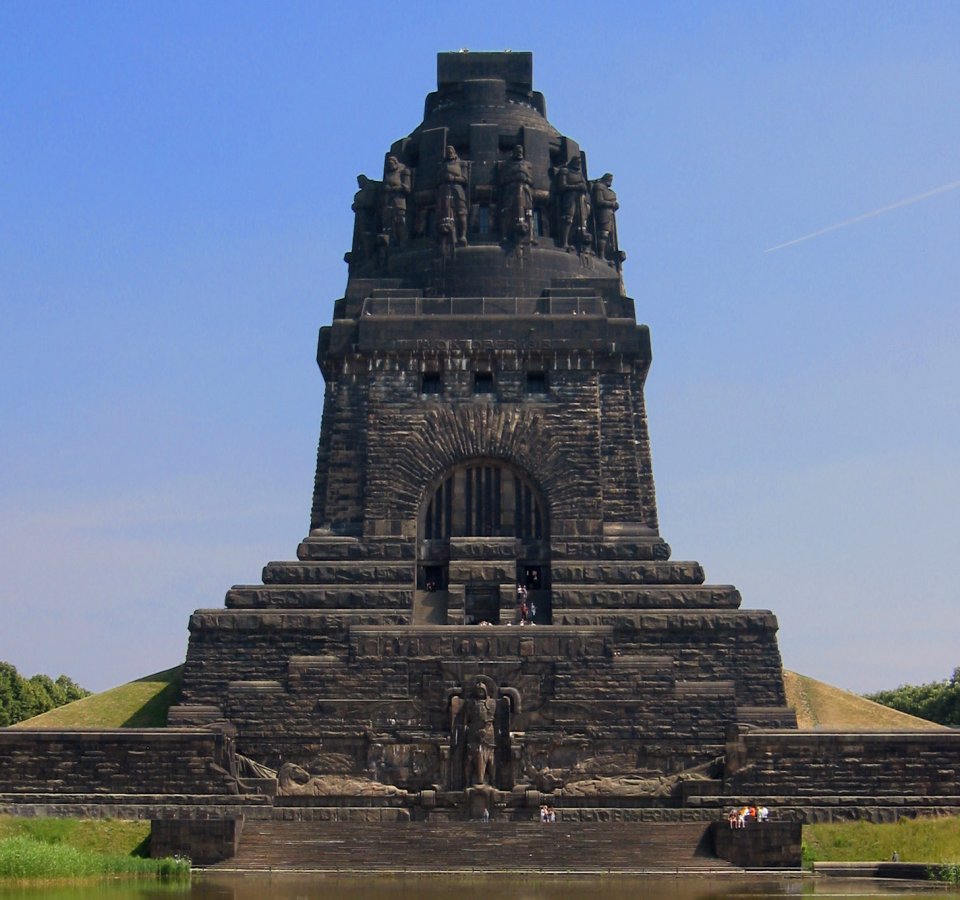 Battle of the Nations (Völkerschlachtdenkmal) in Leipzig, Germany​
Back to the Indianapolis obelisk... there's a Civil War museum in the basement too? Take the virtual tour:
There are a lot of interesting details in the wiki article alone (KD, every article you post has a lifetime of potential work associated with it. When do you expect me to sleep??)

​
There must be more somewhere right? If that's to scale, then we're missing about a third of the actual structure... no basement, no rest base, half the obelisk... maybe you don't need plans for an obelisk though. Back in the day, any architect/builder worth their salt could roll out of bed and put up an obelisk! ...sounds kinda suggestive actually, moving on...

Just a few rapid fire sections that stood out to me:

Although ambiguous language in the authorizing bill created some confusion over the type of memorial to be erected, either a single monument or a combination of monument and memorial hall, the controversy was cleared up in 1893, six years after the bill's initial passage, when its confusing statement was repealed.
Click to expand...

??? Well, I guess after six long years there's no way to find out the original intent.

The cost to complete the monument was $598,318. An estimate to erect a similar structure in 2014 suggests it would exceed $500 million
Click to expand...

Wowza. At least it definitely looks like it though. No wonder they needed to make it a memorial for veterans of multiple wars, more bang for your buck!

Musicians played John Philip Sousa's "The Messiah of the Nations", a march he had composed for the occasion.
Click to expand...

And who is the Messiah of the Nations? I betcha it's Liberty/Columbia/Isis or whatever name you want to call that pagan god (America?). The good news is we have lyrics:

Nothing to see there. Perfectly normal dedication song for war veterans.

During the Christmas season the monument is decorated as an enormous Christmas tree. This annual city tradition, which became known as the "Circle of Lights", began in 1962.
Click to expand...

Man, that took awhile. Feel like they wanted this thing lit up to begin with: 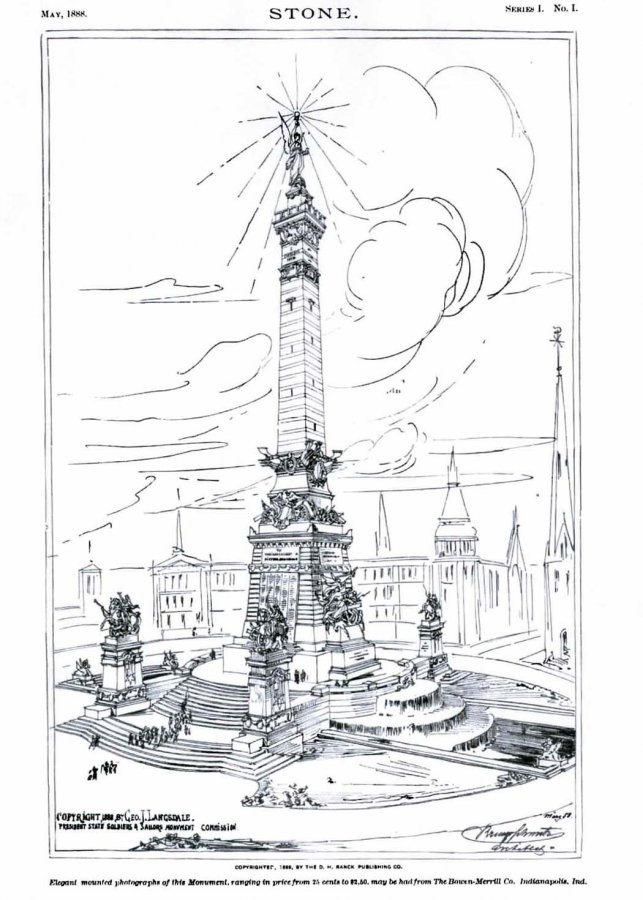 1888 rendering of the monument from STONE magazine​
Seems like there may be some more details in this 1902 publication, I'll try to read through it at some point, but my queue of reading materials is starting to get more ridiculous than our mainstream timeline!
Last edited: Mar 4, 2021

Here is what this area looked like in 1888, before the started the construction of the monument. 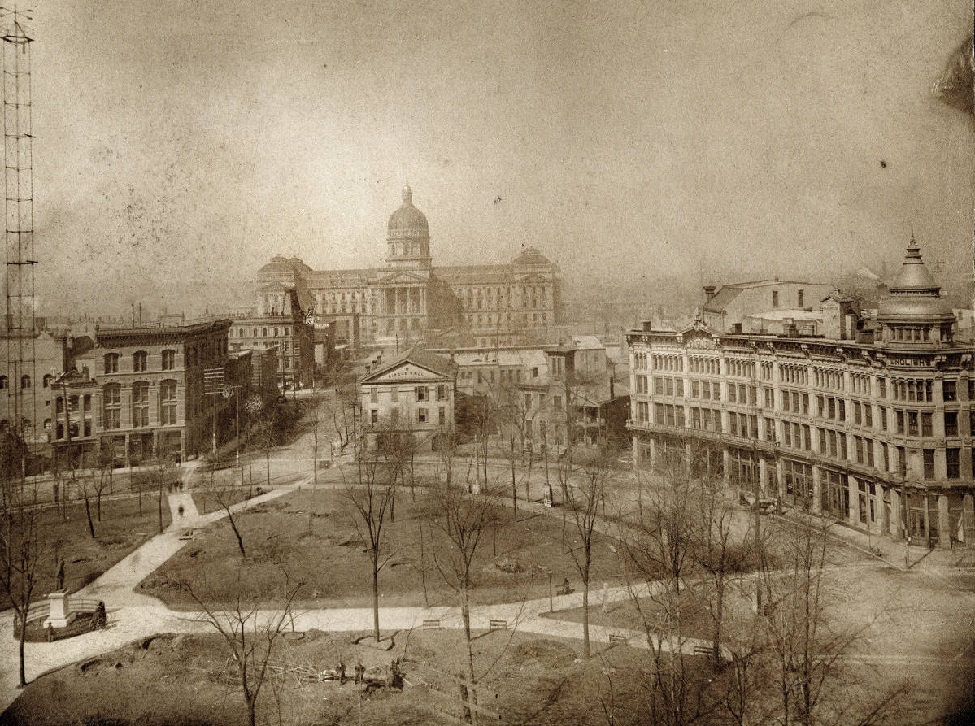 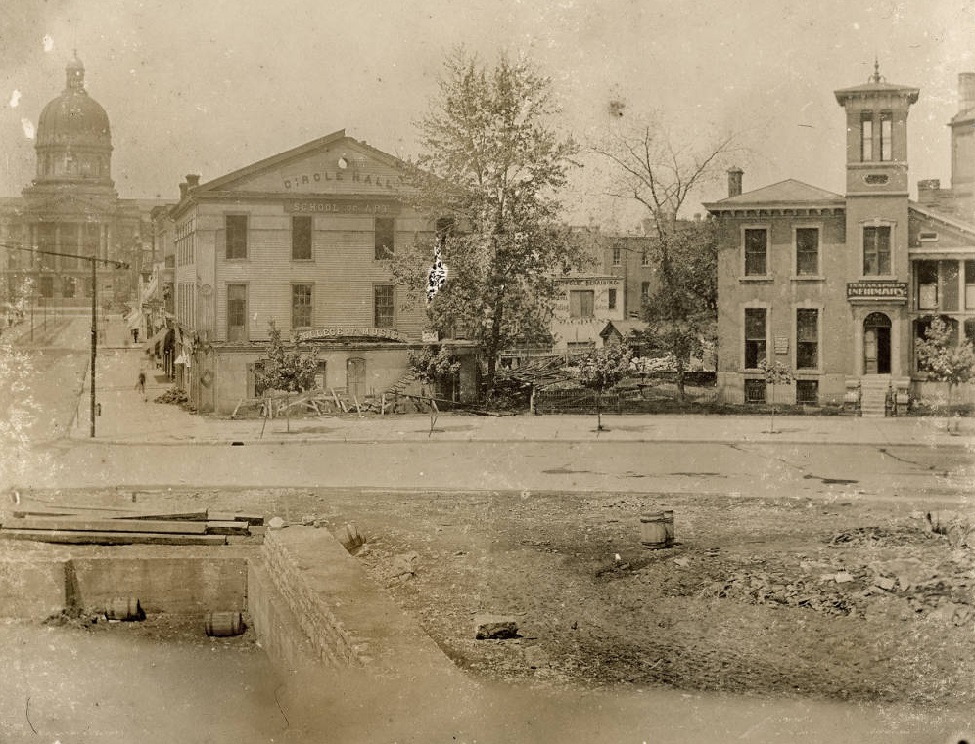 ​
I am not sure what they were digging for in the below two images. 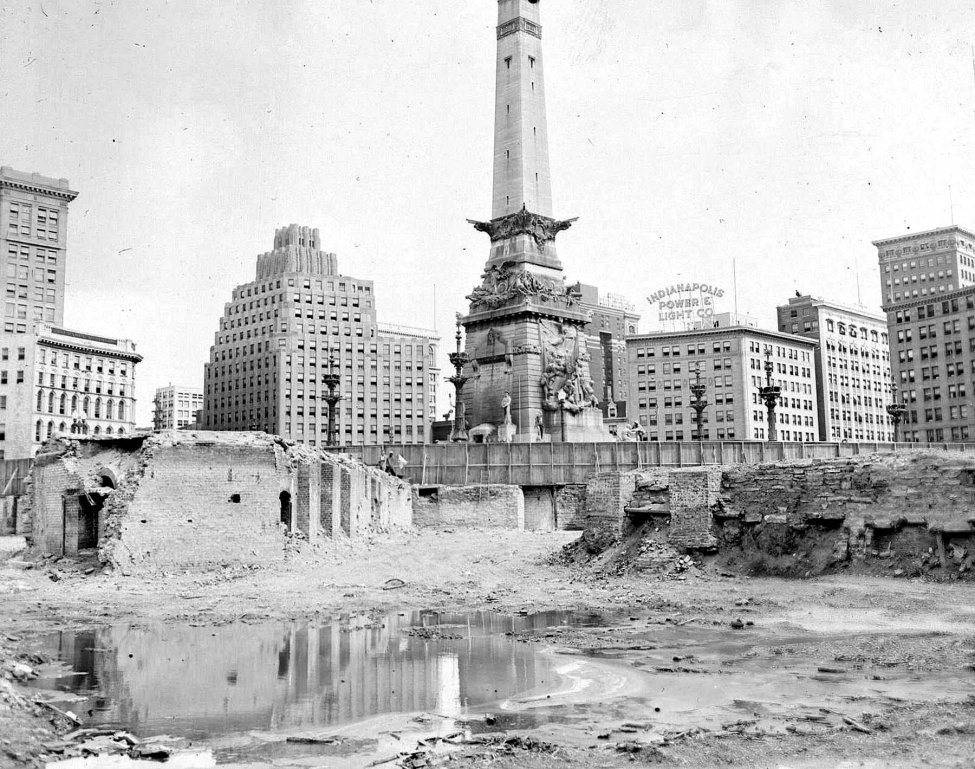 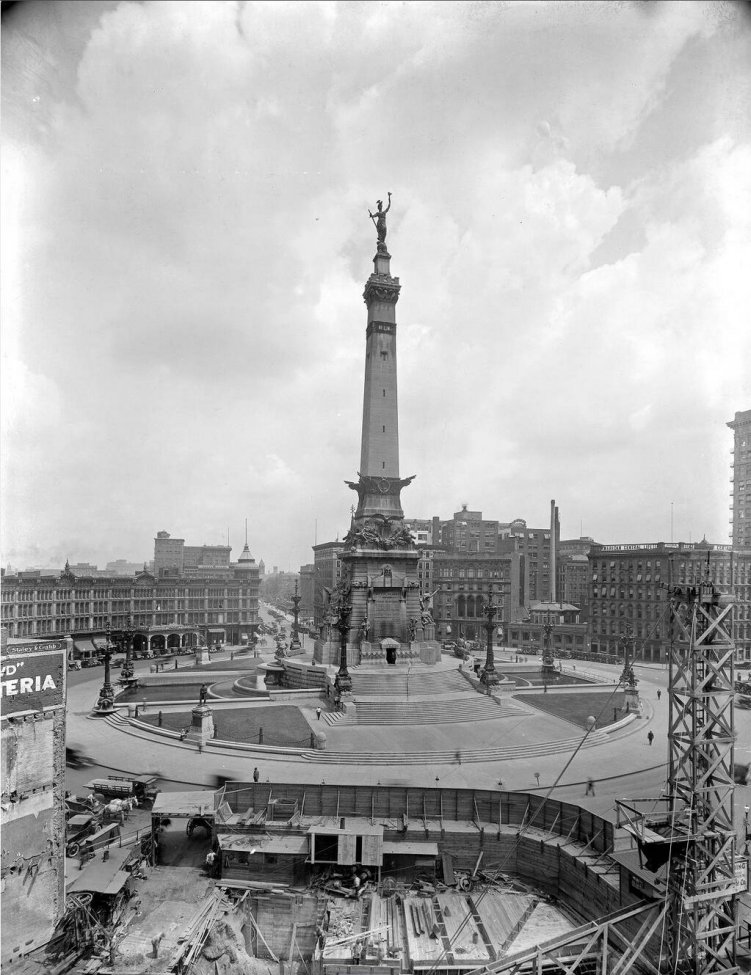 KorbenDallas said:
I am not sure what they were digging for in the below two images.
Click to expand...

Well, the basement museum didn't open until 1918... probably pretty dumb to add it after the fact, but perhaps they were looking for a way in to a pre-existing structure, like an Egyptian tomb.

Those before photos look like they were from an entirely different epoch.

Sometimes it appears that it’s the existing or pre-existing infrastructure they do not want us to see.
A