Ok, this story here makes so much sense, that it was impossible to walk by without sharing it. Whether this camera was built from scratch, or simply re-assembled is hard to say. For what it's worth, the story goes like this...
Early on a bright spring morning in 1900 a large horse-drawn van arrived at the workshop of Chicago camera builder J. A. Anderson. His most recent construction, the world's largest camera, was ready for delivery and it required 15 men to load it into the van. 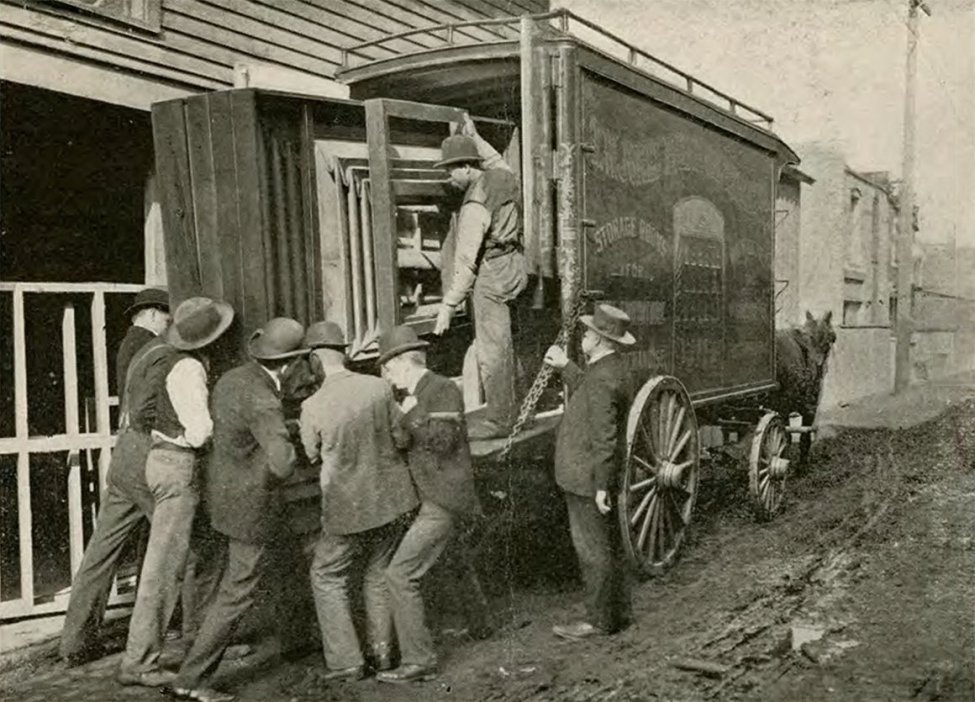 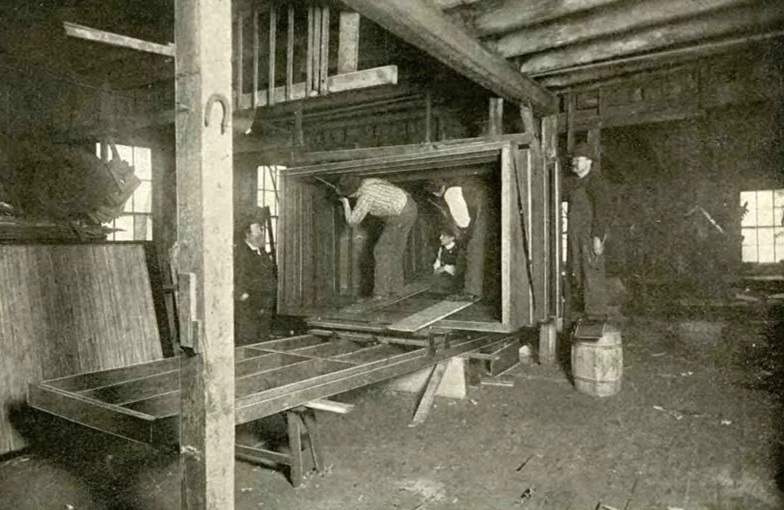 The question arises as to why the Chicago & Alton Railway should have spent a reported $5000 to construct a camera to make only one exceptionally large plate.
The company's enthusiasm and pride in the train was explained as follows:

A second major reason for making the photograph was the desire to participate in the Paris Exposition of 1900.
This 32-year-old commercial photographer (Lawrence) was not the graduate of some prominent technical institution, but was a northern Illinois farm boy with a country-school education. 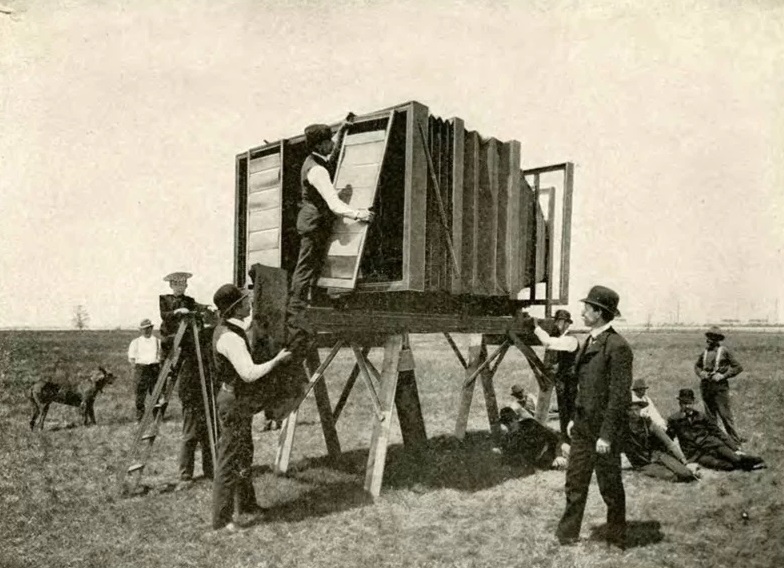 The amounts of materials used to construct the camera were truly prodigious. Natural cherry wood was used throughout for the frame and bed. The bellows consisted of three layers: an outer covering of heavy rubber, a lining of black canvas, and an additional lining of opaque black material. Each fold was stiffened by a piece of whitewood ¼ in thick. This light-proof construction required two bolts of wide rubber cloth, more than 40 gallons of cement, and 500 ft of whitewood to ensure rigidity. The heavy bellows was divided into four sections and between each one there was a supporting frame mounted on small wheels to move freely on a steel track. The huge plate holder had a cloth-lined wooden roller curtain that was light-tight and, when in place on the camera, could be rolled back to uncover the glass plate just prior to exposure. It was lined with three thicknesses of light-proof material to prevent leaks while the plate was outside the camera. The wooden curtain contained about 80 ft2 of 3/8 in thick ash and was glued to the three layers by more than 10 gallons of cement. To ensure the smooth operation of the curtain, ball-bearing rollers were mounted every 2 in in the holder's grooves in which it slid. 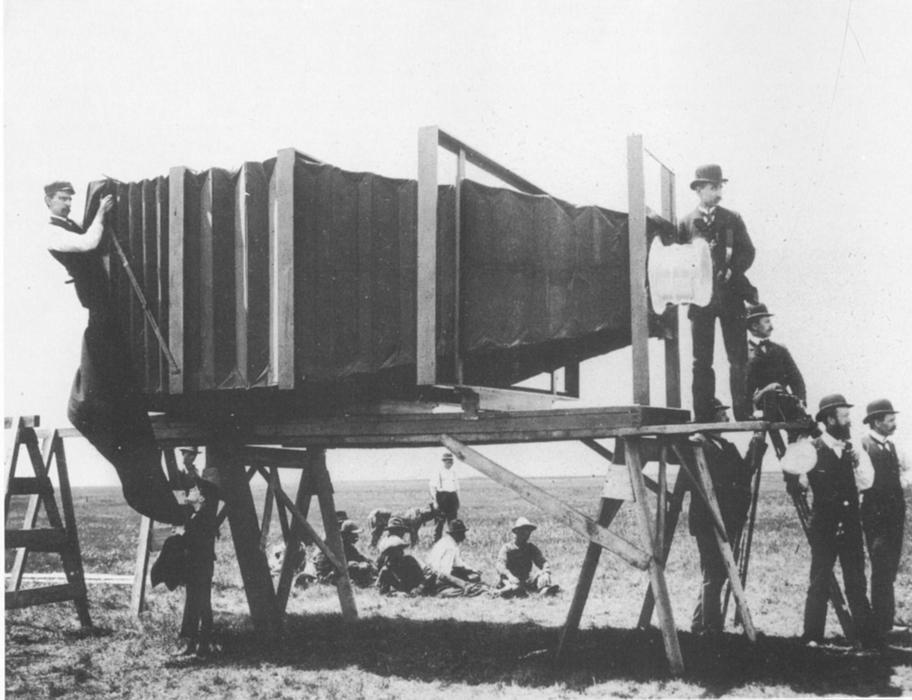 References and Sources (not sure if they all still work):

What resulted was the largest photo ever made on a single plate - a beautiful image of the “handsomest train in the world.” The photo created a stir when it was exhibited at the 1900 Paris Exposition, and officials requested affidavits before they were willing to proclaim that it was the largest single-plate photo in the world. 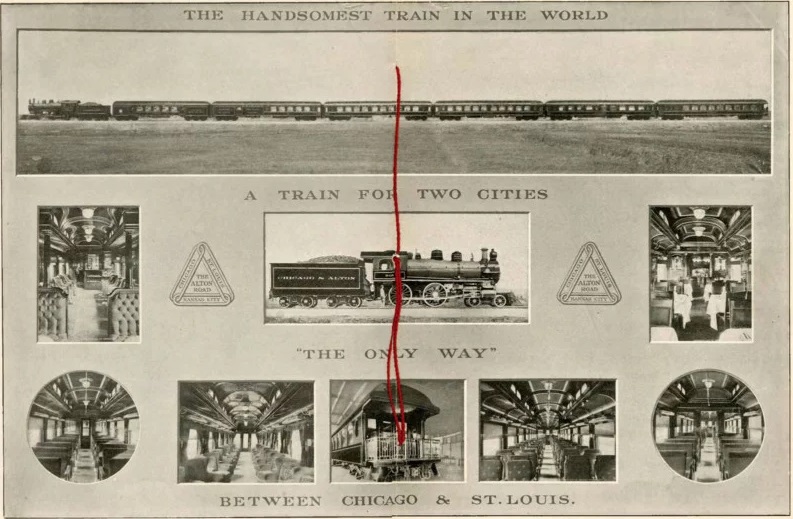 KD: Is this thing for real?
Click to expand...