This is just a tribute to some fascinating craftsmanship, for I doubt we will ever be allowed to know who built these structures. Perhaps, it's not the craftsmanship itself, or the stone working technique used, that can't cease to amaze me. It's the fact that we do not remember this technique that I find the most fascinating.

I do understand that other places like Sacsayhuamán, Pumacocha, Tambomachay, etc. have structures built using the same technique. Yet, there is something about these chullpa towers that I cannot put a finger on.
Well, and those who were allegedly buried in these towers were anything but humans we know. 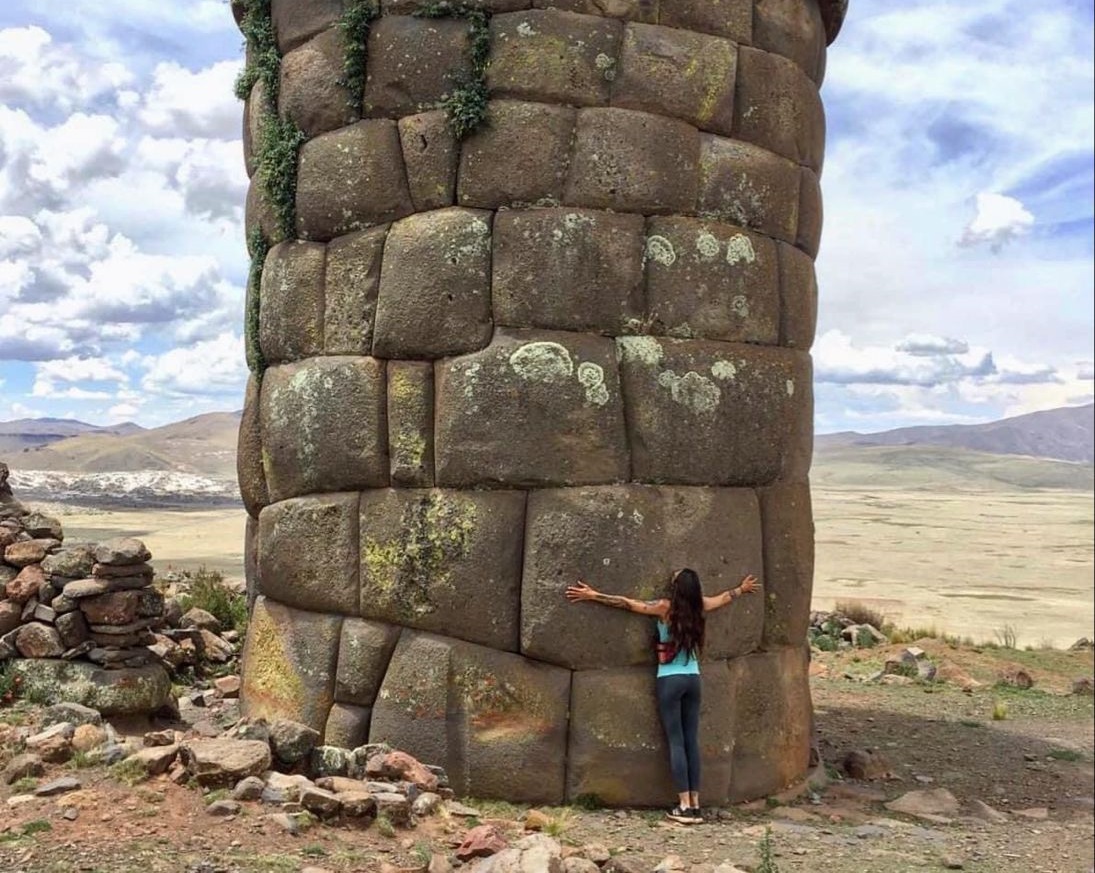 Chullpa Towers & Aymara People​
A chullpa is an ancient Aymara funerary tower originally constructed for a noble person or noble family. Chullpas are found across the Altiplano in Peru and Bolivia. The tallest are about 12 metres (39 ft) high. 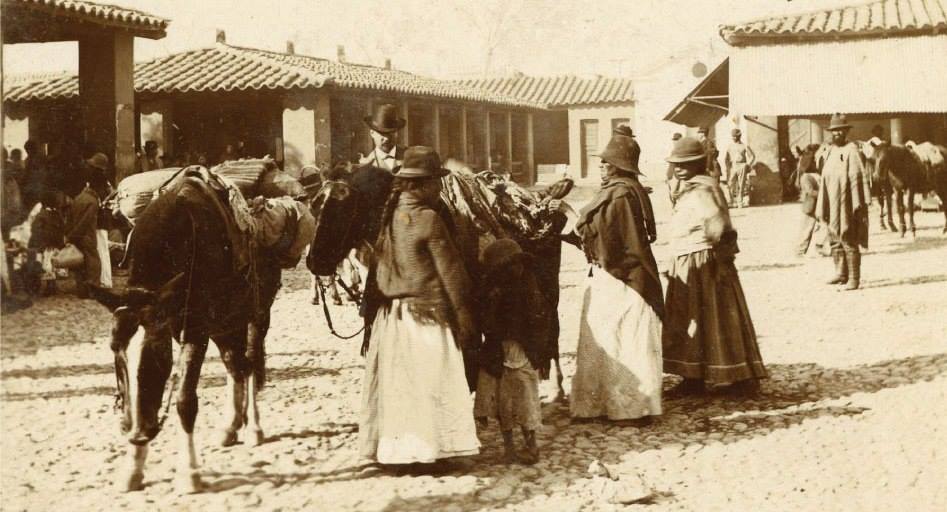 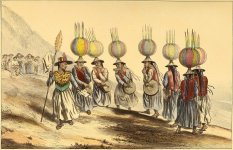 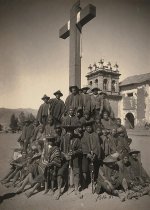 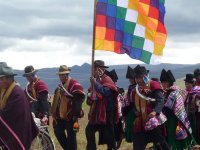 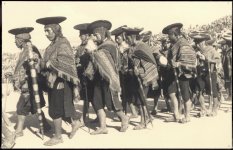 ​
The tombs at Sillustani are most famous. Recent research has focused on the connection between chullpas and the ritual pathways etched into the landscape around Nevado Sajama, as well as possible patterns within chullpa sites. 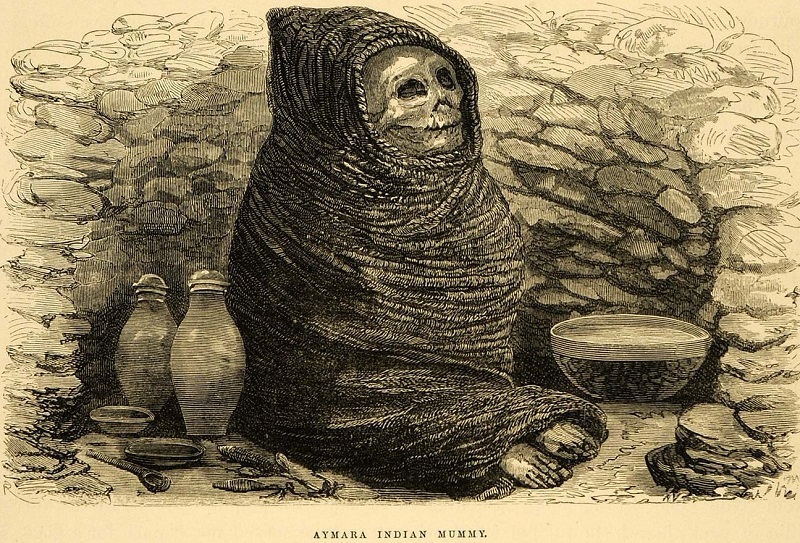 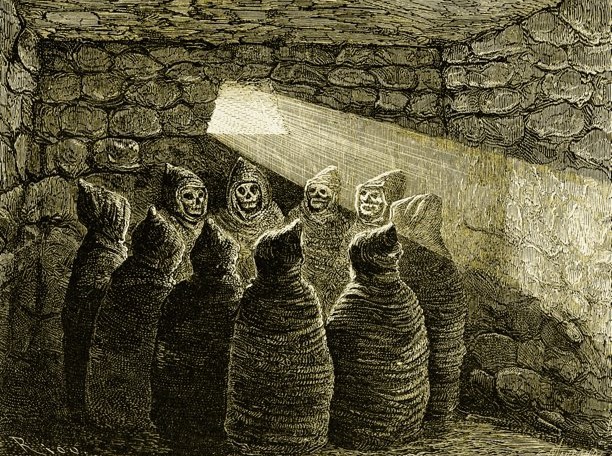 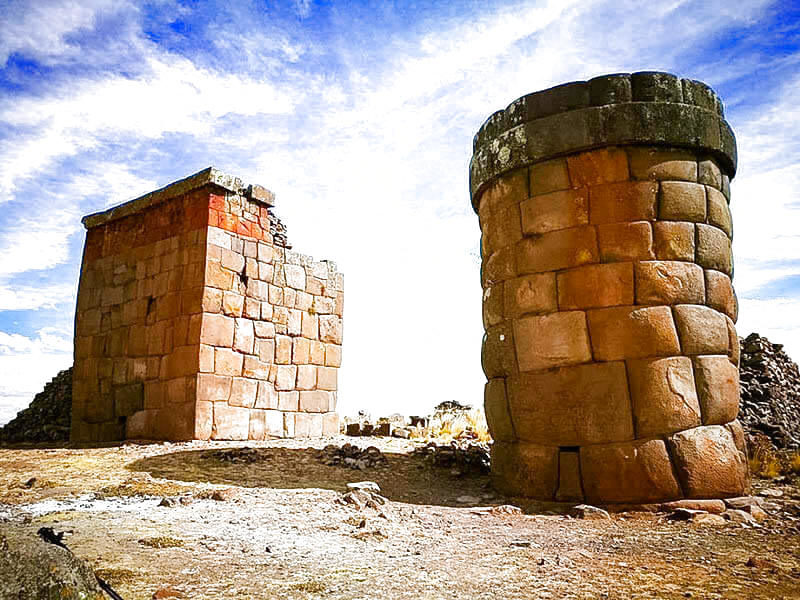 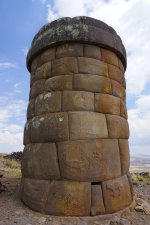 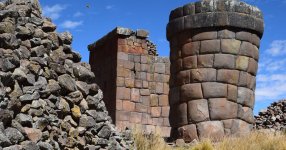 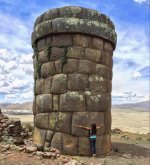 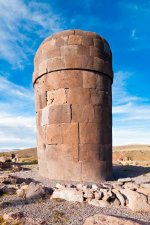 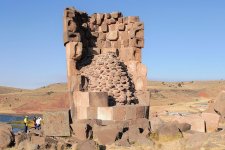 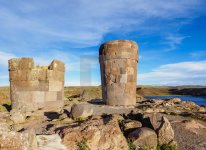 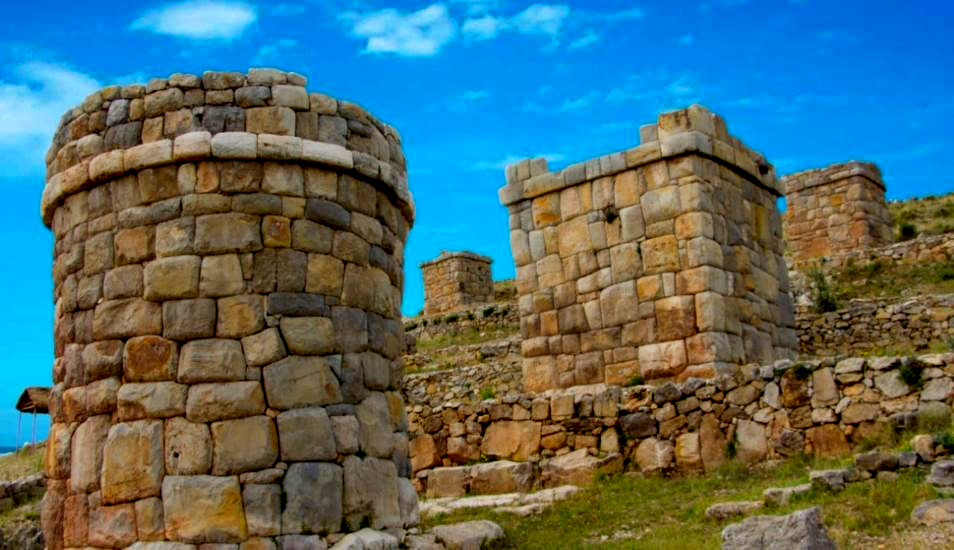 Chullpa towers above лоок a bit more "hi-tech" than these towers below. 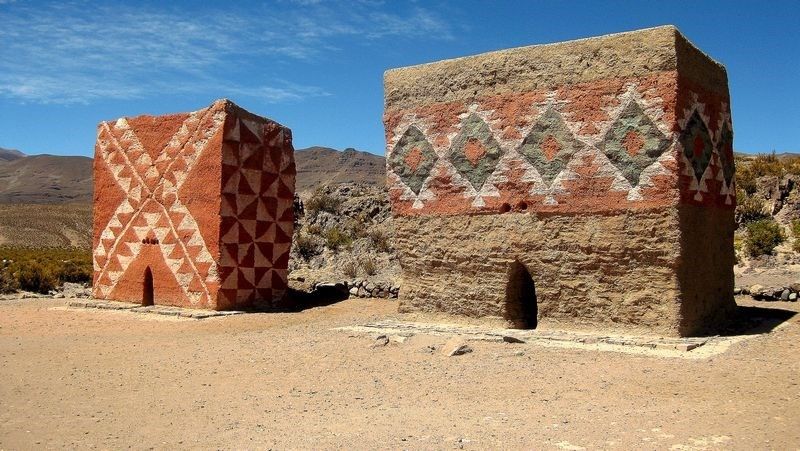 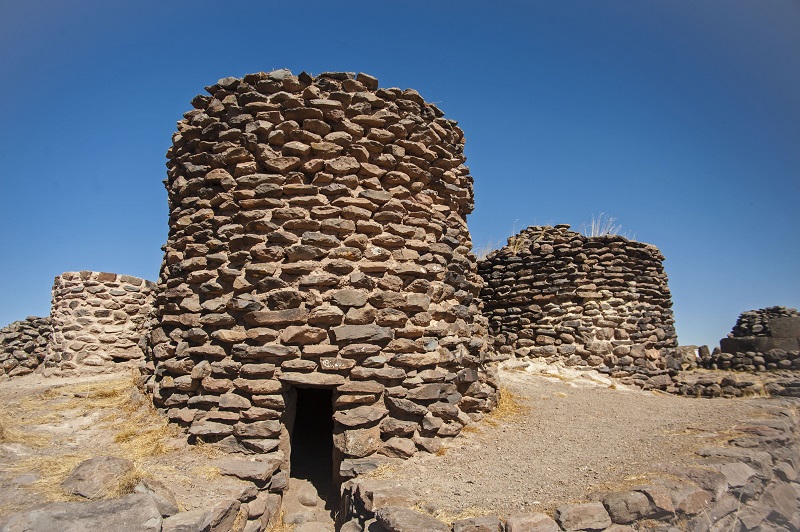 KD: It appears that most of these towers were built using artificially produced stones. In my current opinion, some pliable composite cement-like mass was still soft when positioned in place, and that's it. I do not think there is anything tremendously complicated in this technique. It had to be as easy as shaping a plaster equivalent of the same. It is pretty obvious that for whatever reason we are forced to consider the stones to be natural.
There sure are some questions to these towers... 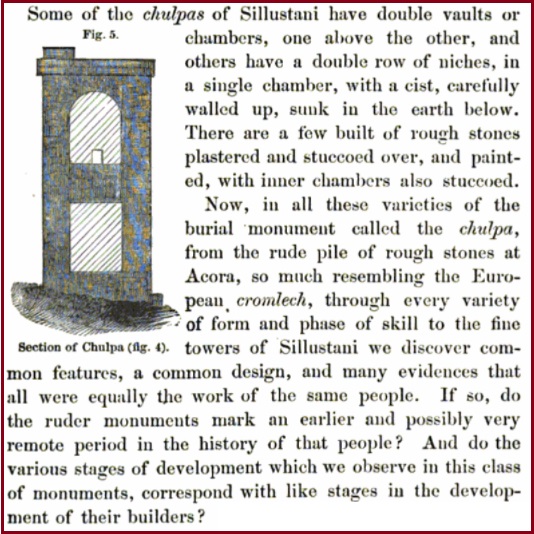 The Aymara People​
It's somewhat doubtful, that the Aymara people pictured in the above photographs are the same Aymara people these towers were allegedly built by. As it stands, our current scientific community is great at making up names. Who knows what the below individuals called themselves when they were alive? 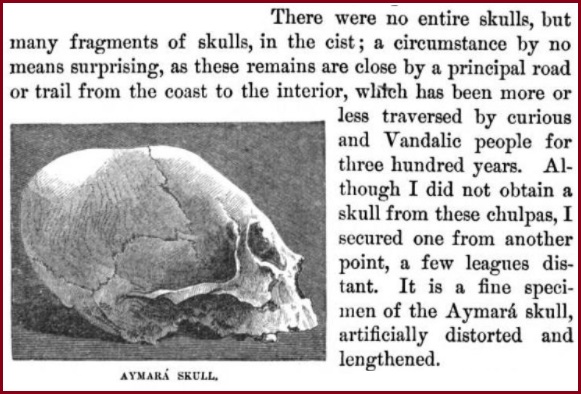 1877 Source
​
I don't know about you, but these do not look like any Homo sapiens I know. 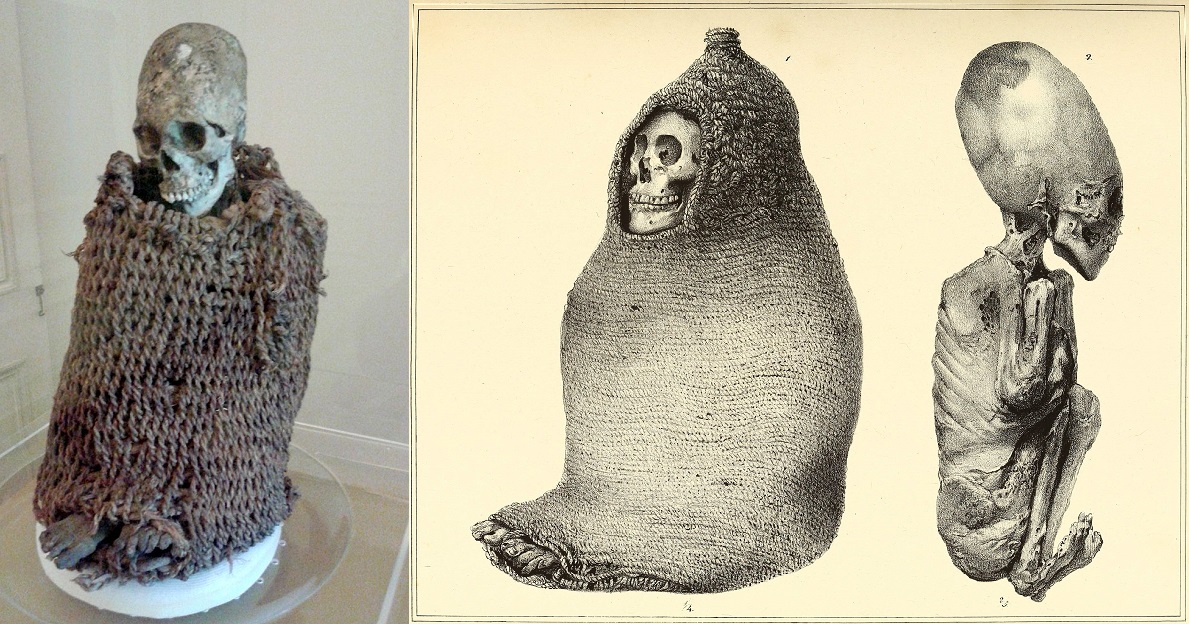 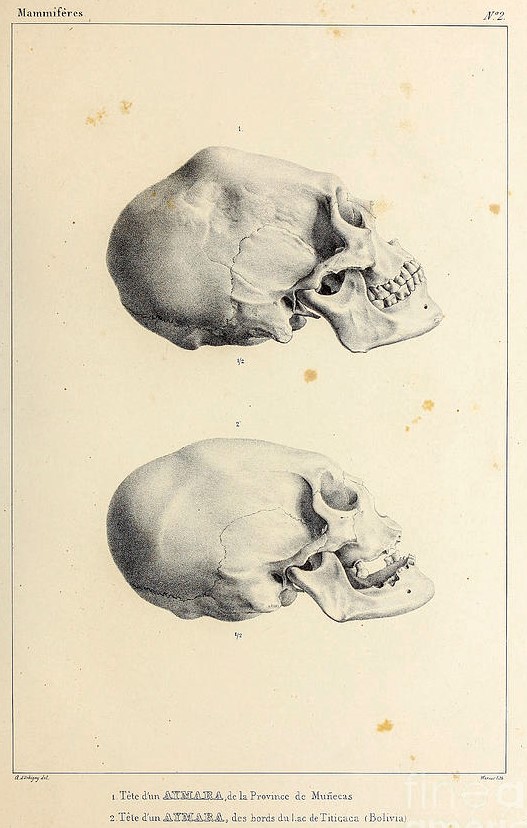 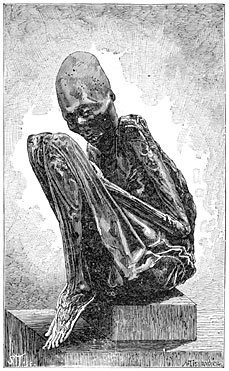 Source
​
By the way, the skulls of the below type, are also being attributed to Aymaras. 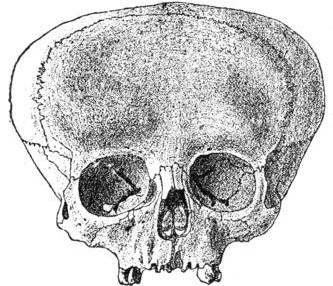 Source
​
I am not gonna pretend that I know what we have going on here. Once again, the narrative appears to be full of baloney.

KorbenDallas said:
Some of the stones are humongous. I wonder why..?
Click to expand...

Maybe that's an indication of the size of the builders, but I would also suggest simply "why not?" If you have the ability to pour stone easily, why not make it as large as possible? Bricks are commonly used because they're easy to physically manipulate, I would imagine larger blocks would be more common if they weren't so cumbersome (again, indicating that in the past, the process wasn't, for whatever reason.)

Of course, none of that addresses why these structures had to be so big, given their rather mundane alleged function. It seems if you find human remains anywhere, the defacto explanation becomes a tomb/cemetery/etc. The part about corpses generally being found in the "fetal position" is interesting though, and now my brain is working overtime to tie a few things together. Like from this topic:

KorbenDallas said:
Who and what were these humanoids?
Click to expand...

Perhaps they aren't homo sapiens, or maybe they are, but they just manipulated their skulls... however, to suggest a third (very speculative) possibility, maybe they are human beings at their fullest potential, so to speak. I've long been aware that biologists think that the physical limitations of the mother actually result in everyone being born, in a sense, prematurely:

Human babies enter the world utterly dependent on caregivers to tend to their every need. Although newborns of other primate species rely on caregivers, too, human infants are especially helpless because their brains are comparatively underdeveloped. Indeed, by one estimation a human fetus would have to undergo a gestation period of 18 to 21 months instead of the usual nine to be born at a neurological and cognitive development stage comparable to that of a chimpanzee newborn. Anthropologists have long thought that the size of the pelvis has limited human gestation length. New research may challenge that view.

The traditional explanation for our nine-month gestation period and helpless newborns is that natural selection favored childbirth at an earlier stage of fetal development to accommodate selection for both large brain size and upright locomotion—defining characteristics of the human lineage. In this view, adaptations to bipedalism restricted the width of the birth canal and, hence, the size of the baby that can pass through it. Human babies are thus born when their brains are less than 30 percent of adult brain size so that they can fit through the narrow passageway. They then continue development outside of the womb, with brain size nearly doubling in the first year.
Click to expand...

Now, the article does go on to say the current research contends that it isn't the physical size of the mother's birth canal (which has allegedly "evolved" over time to accomodate our big headed babies) results in the "early" birth, but rather a metabolic limitation (baby would starve the mother, essentially). Either explanation is fine, as the takeaway is that human beings appear to be born prior to being fully cooked, and I think common sense validates this. A newborn baby human left in the wild for no parent is likely just food for another predator, mostly all other animals are far more competent initially.

I think all of this does potentially suggest an artificial/unusual origin for homo sapiens, either some sort of faulty genetic manipulation, or a more nefarious one, designed to limit natural reproduction. Or, if you prefer, it could be seen as evidence of humans being a hybrid, as this sort of difficulty seems like it could be the result of two different species, perhaps with a large size discrepancy, successfully mating (like the pig-chimp hybrid theory, which I make no claims to the validity of it, but I absolutely love the idea. We humans think we're just so special, amazing, and above nature, almost all of our origin stories/theories have spectacular elements incorporated... it would be a real ego check to learn we came into existence just because a monkey found a sexy pig and got it on!).

Anyway, implications to the initial creation of human beings aside, my entire point for bringing this up was to suggest that perhaps peoples with elongated skulls like the Aymaras (or Egyptians, or royal elites) are the result of growing babies in an artificial womb. Perhaps outside of the nurturing prenatal environment retards our brain/skull growth and the "natural" conclusion to this process would result in humans that look more like these people.

Heh, took me awhile to make a very basic point, but I always want to provide other explanations besides ancient genetic manipulation, comparable to modern techniques. I have no reason to believe that previous civilizations followed the same sort of technology path we have or whether even our current technology path would even be reliably capable of producing results like this. I have great skepticism on how capable mapping the human genome has made us on even curing degenerative diseases like cancer let alone how technologies like CRISPR will eventually result in the creatures of legend. The promises of gene therapy/manipulation have a long history and sort of smell like "bases on the moon" to me at this point. I could very well be wrong. But it does seem far easier to mix together egg and sperm, throw it in a container, and let it grow for 18 months or so, with different results from a "standard" human.

There are just so many possibilities, it's really hard to have any idea which ones are more valid. It does seem like there was more variation in the past among "humans" and that we're missing key parts of their buildings' construction and purpose. And that "your" guess is probably just as good as any "experts'."

I can't help but wonder that these were just some pieces of art, like someone that whittles a piece of wood for fun.

The stones look to me like they have sagged and bulged under their own weight suggesting that they were some kind of mud or maybe clay, this would also explain why there seems to be no mortar or gaps, however it would take something very big indeed to do something like this for fun or a pastime, the mind boggles.

I'm not going to try to explain this myself because NewEarth does an amazing job! But, I agree with her!

Great work. An interesting theory I've come across is that they are actually tanks to hold liquid as part of a gold mining process. I realize that sounds bizarre but this youtube channel covers it in great detail over 10 videos and is very convincing. it's not only these towers, but many aspects of Peru show signs of being a massive gold mining operation. These towers are built on slopes and are placed in a descending pattern. there appear to be a rock or two near the bottom and top that could have been where something connected them together in a gravity-fed filtering process. the videos do far better at explaining it than I can. They were most certainly later repurposed as tombs by some culture that came later, you can tell that by the rubble and change in construction on some of the more dilapidated chullpas.

Figured it was somewhat interesting. Irkutsk is located on the former Tartarian territory. 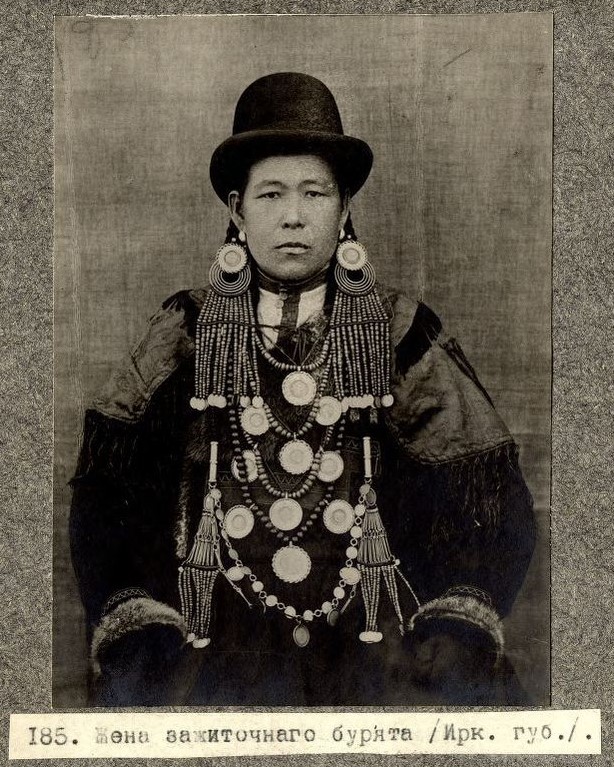 I remember an ancient aliens episode that theorized that similar construction was achieved through a melting tech. To illustrate they used clay miniatures which resulted in comparative visual results. Now we know about the Tartarians! They had advanced technology based on vibration harnessed from the either. Wielding this tech one could levitate heavy blocks and melt them together. Tartaria was a world empire connected with a grid system of free power vibrating with the living water. The technological possibilities are endless with spinning vortices.
You must log in or register to reply here.
Similar articles