Outer Space - what is it?

Space, also known as outer space, is the near-vacuum between celestial bodies. It is where everything (all of the planets, stars, galaxies and other objects) is found. On Earth, space begins at the Kármán line (100 km above sea level). This is where Earth's atmosphere is said to stop and outer space begins. This is not a natural boundary but is a convention used by scientists and diplomats.

However, the space near Earth is quite crowded by astronomical standards. A list of spaces goes like this:

KD: above is what the official version of "space" is. Basically, we are being told that there are some celestial objects hanging out in various places within near-vacuum conditions.

I have my doubts that this "space" exists in its conventional form. From day one we are being fed the traditional narrative filled with planets, orbits, stars, galaxies, etc. What's there to doubt? Just look up. But... how do we know what those objects above us really are? For example, how do we know that planets are physical objects and not some bright lights presented to us as physical objects.

​
It's just my small opinion, but I think other worlds do exist but they have nothing to do with space and planets. Not sure what the set up would be. May be something similar to the image below. 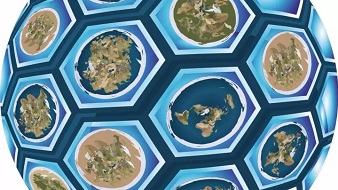