Now, this early 13th century bridge presents an interesting piece of architecture. I do not know when the 13th century could be placed on the adjusted time table, but if we choose to go along with the narrative, there will be more questions than answers. Obviously, there is no way to vouch for the accuracy of any of the below drawings, but we have what we have in reference to the traditional dating and to the actual graphical representation. 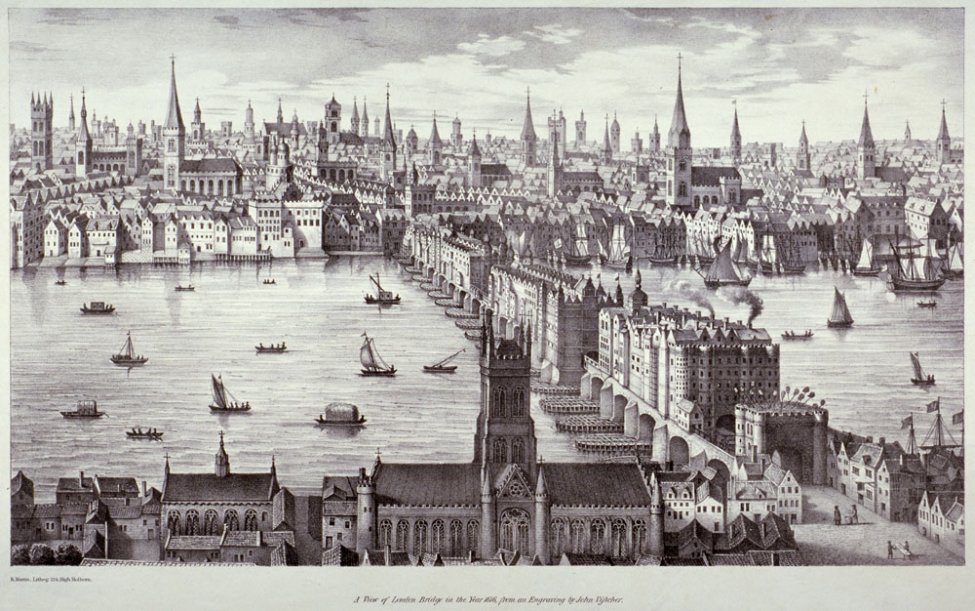 What amazes me besides the actual 1209 AD bridge, is the view of the 13th century London situated in the background of some of the presented drawings. ON a separate note we need to consider that the redesigned version of this bridge was relocated to Arizona, USA in the 1960s.


"Old" London Bridge (1209–1831)​
After the murder of his erstwhile friend and later opponent Thomas Becket, Archbishop of Canterbury, the penitent King Henry II commissioned a new stone bridge in place of the old, with a chapel at its centre dedicated to Becket. Building work began in 1176, supervised by Peter of Colechurch. It was finished by 1209 during the reign of King John; it had taken 33 years to complete.

The bridge was 26 feet (8 m) wide, and about 800–900 feet (240–270 m) long, supported by 19 irregularly spaced arches, founded on starlings set into the river-bed. It had a drawbridge to allow for the passage of tall ships, and defensive gatehouses at both ends. By 1358 it was already crowded with 138 shops. At least one two-entranced, multi-seated public latrine overhung the bridge parapets and discharged into the river below; so did an unknown number of private latrines reserved for Bridge householders or shopkeepers and bridge officials. In 1382–83 a new latrine was made (or an old one replaced) at considerable cost, at the northern end of the bridge.


... the course of the river being turned another way ... 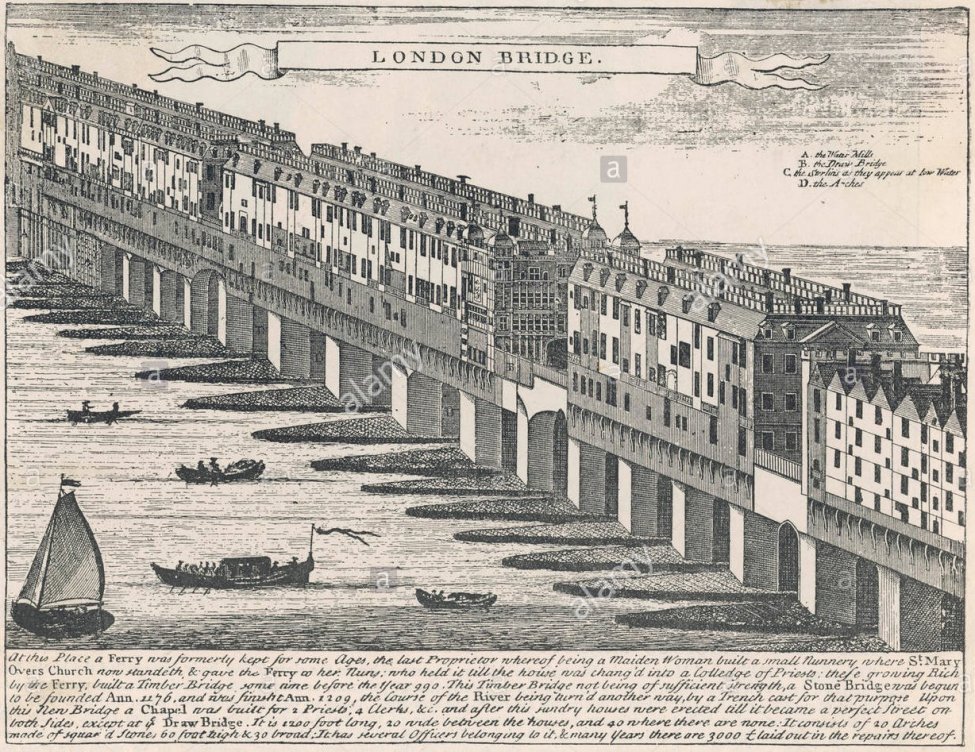 The buildings on London Bridge were a major fire hazard and increased the load on its arches, several of which had to be rebuilt over the centuries. In 1212, perhaps the greatest of the early fires of London broke out on both ends of the bridge simultaneously, trapping many people in the middle. Houses on the bridge were burnt during Wat Tyler's Peasants' Revolt in 1381 and during Jack Cade's rebellion in 1450. A major fire of 1633 that destroyed the northern third of the bridge formed a firebreak that prevented further damage to the bridge during the Great Fire of London (1666).

By the Tudor period there were some 200 buildings on the bridge. Some stood up to seven storeys high, some overhung the river by seven feet, and some overhung the road, to form a dark tunnel through which all traffic had to pass; this did not prevent the addition, in 1577, of the palatial Nonsuch House to the buildings that crowded the bridge. The available roadway was just 12 feet (4 m) wide, divided into two lanes, so that in each direction, carts, wagons, coaches and pedestrians shared a single file lane six feet wide. When the bridge was congested, crossing it could take up to an hour. Those who could afford the fare might prefer to cross by ferry, but the bridge structure had several undesirable effects on river traffic. The narrow arches and wide pier bases restricted the river's tidal ebb and flow, so that in hard winters, the river upstream of the bridge became more susceptible to freezing and impassable by boat. The flow was further obstructed in the 16th century by waterwheels (designed by Peter Morice) installed under the two north arches to drive water pumps, and under the two south arches to power grain mills; the difference in water levels on the two sides of the bridge could be as much as 6 feet (2 m), producing ferocious rapids between the piers resembling a weir. Only the brave or foolhardy attempted to "shoot the bridge"—steer a boat between the starlings when in flood—and some were drowned in the attempt. The bridge was "for wise men to pass over, and for fools to pass under."

The southern gatehouse became the scene of one of London's most notorious sights - a display of the severed heads of traitors, impaled on pikes and dipped in tar and boiled to preserve them against the elements. The head of William Wallace was the first to appear on the gate, in 1305, starting a tradition that was to continue for another 355 years. Other famous heads on pikes included those of Jack Cade in 1450, Thomas More in 1535, Bishop John Fisher in the same year, and Thomas Cromwell in 1540. In 1598, a German visitor to London, Paul Hentzner, counted over 30 heads on the bridge:
Evelyn's Diary noted that the practice stopped in 1660, following the Restoration of King Charles II, but heads were reported at the site as late as 1772. In 1666, the Great Fire of London first destroyed the bridge's waterwheels, preventing them from pumping water to fight the fire, and then burned one third of the houses on the bridge; a gap in the building left by a previous fire in 1633 prevented the destruction of the rest.


Drawing of London Bridge from a 1682 panorama

Source​
By 1710, most of the houses on the bridge had been rebuilt in the Restoration style and in order to widen the roadway to 20 feet (6 metres), the new houses were built overhanging the river supported by wooden girders and struts which hid the tops of the arches. In 1722 congestion was becoming so serious that the Lord Mayor decreed that "all carts, coaches and other carriages coming out of Southwark into this City do keep all along the west side of the said bridge: and all carts and coaches going out of the City do keep along the east side of the said bridge." This has been suggested as one possible origin for the practice of traffic in Britain driving on the left. 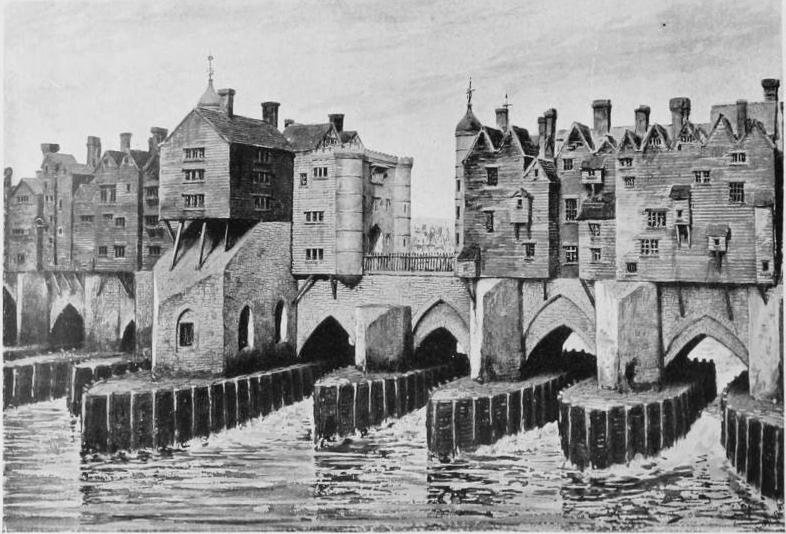 ​
The last houses to be built on the bridge were designed by George Dance the Elder in 1745, but even these elegant buildings had begun to subside within a decade. In 1756, the London Bridge Act gave the City Corporation the power to purchase all the properties on the bridge so that they could be demolished and the bridge improved. While this work was underway, a temporary wooden bridge was constructed to the west of London Bridge. It opened in October 1757 but caught fire and collapsed in the following April. The old bridge was reopened until a new wooden construction could be completed a year later. To help improve navigation under the bridge, its two centre arches were replaced by a single wider span, the Great Arch, in 1759. The last tenant on the bridge left in 1762 when the final buildings were cleared.


One of the pedestrian alcoves from the 1762 renovation 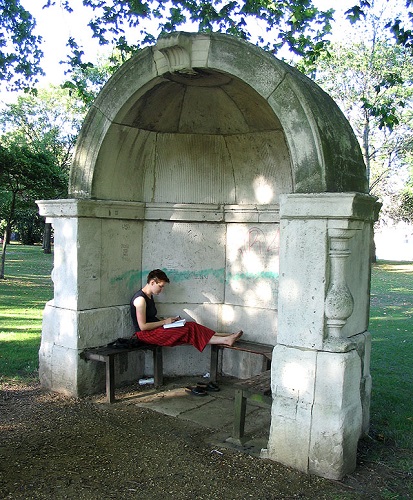 The pedestrian entrance of the old London Bridge is built into the
tower of St Magnus the Marytr’s Church on Lower Thames Street. 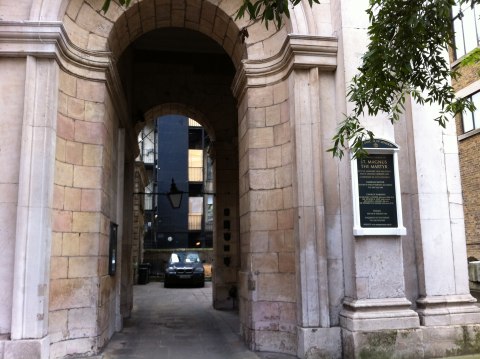 Source​
Under the supervision of Dance the Elder, the roadway was widened to 46 feet (14 metres) and a balustrade was added "in the Gothic taste" together with fourteen stone alcoves for pedestrians to shelter in. However, the creation of the Great Arch had weakened the rest of the structure and constant expensive repairs were required in the following decades; this, combined with congestion both on and under bridge, often leading to fatal accidents, resulted in public pressure for a modern replacement.


"New" London Bridge (1831–1967)​
In 1799, a competition was opened to design a replacement for the medieval bridge. Entrants included Thomas Telford; he proposed a single iron arch span of 600 feet (180 m), with 65 feet (20 m) centre clearance beneath it for masted river traffic. His design was accepted as safe and practicable, following expert testimony. Preliminary surveys and works were begun, but Telford's design required exceptionally wide approaches and the extensive use of multiple, steeply inclined planes, which would have required the purchase and demolition of valuable adjacent properties. A more conventional design of five stone arches, by John Rennie, was chosen instead. It was built 100 feet (30 m) west (upstream) of the original site by Jolliffe and Banks of Merstham, Surrey, under the supervision of Rennie's son. Work began in 1824 and the foundation stone was laid, in the southern coffer dam, on 15 June 1825. 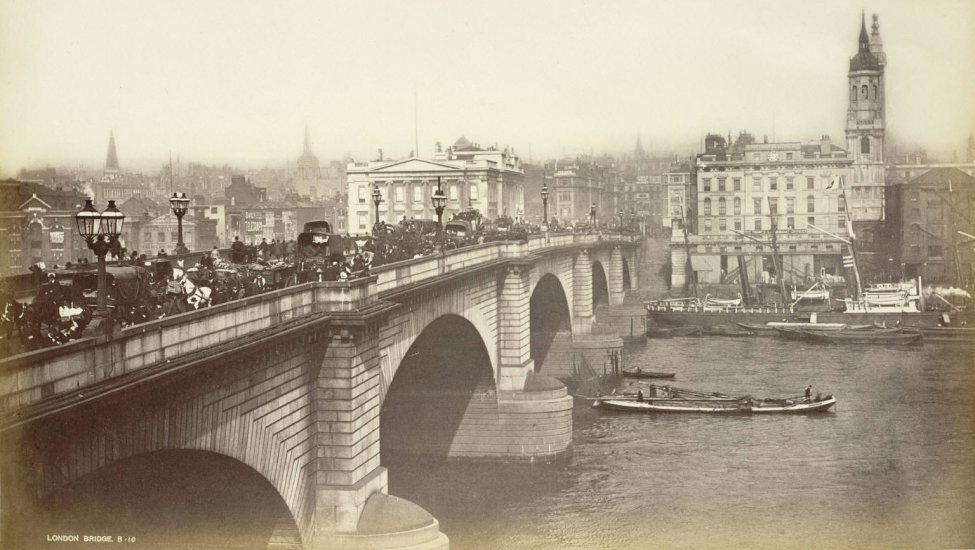 The old bridge continued in use while the new bridge was being built, and was demolished after the latter opened in 1831. New approach roads had to be built, which cost three times as much as the bridge itself. The total costs, around £2.5 million (£223 million in 2018), were shared by the British Government and the Corporation of London. 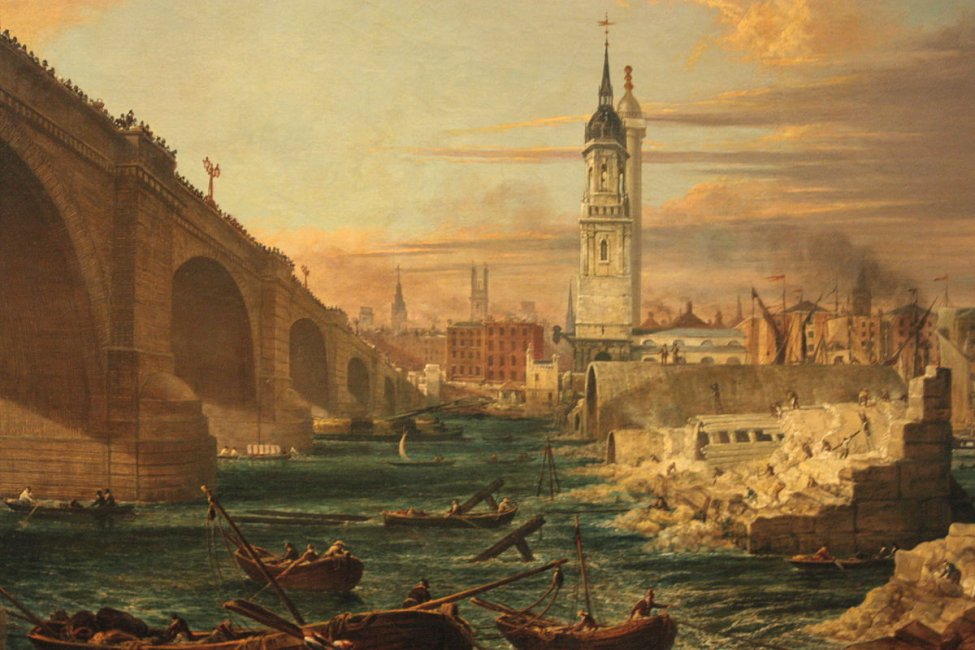 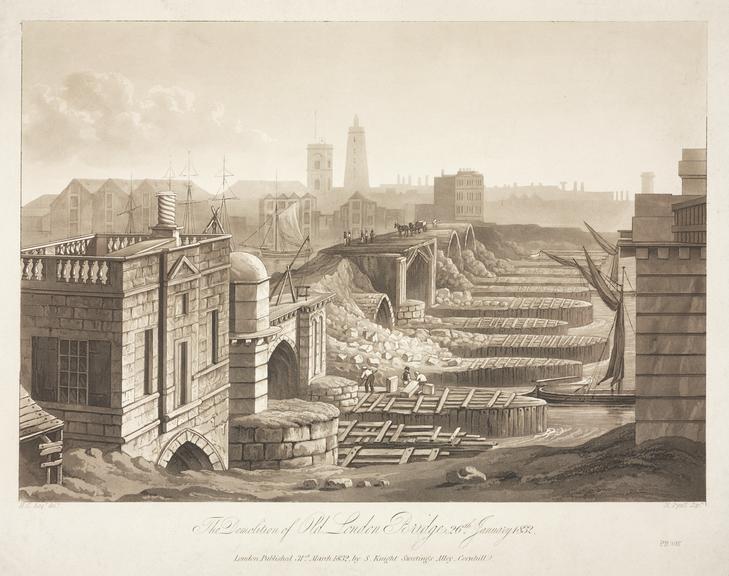 The London Bridge today: Arizona, USA​
The bridge was dismantled in 1967 and relocated to Arizona. The Arizona bridge is a reinforced concrete structure clad in the original masonry of the 1830s bridge, which was purchased by Robert P. McCulloch from the City of London. McCulloch had exterior granite blocks from the original bridge numbered and transported to America to construct the present bridge in Lake Havasu City, a planned community he established in 1964 on the shore of Lake Havasu. The bridge was completed in 1971 (along with a canal), and links an island in the Colorado River with the main part of Lake Havasu City. 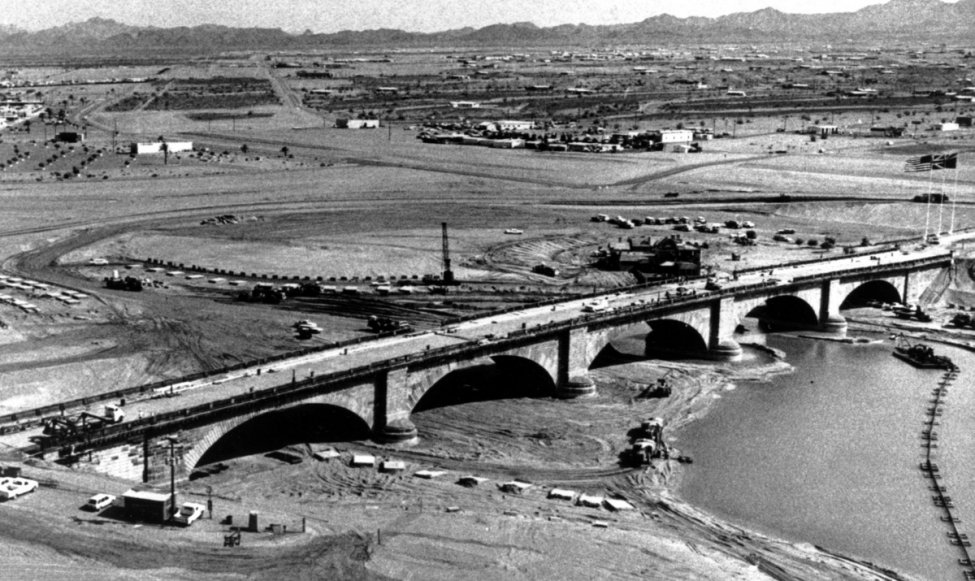 KD: Well, this is the bizarre story of the London bridge. Judging by the remaining parts of the "Old" bridge, it was a major and prominent structure, which was built to last, and it sure did last. The "Old" bridge served for 600 years, and for the reasons "they gave us", it was dismantled and replaced.

Interesting fact: they used horses and manual labor (judging by the images) in 1830s to break the "Old" bridge down. And they probably used the same tech 600 years prior to build it. Somehow I find this 600 year stagnation, and lack of development hard to believe.

There are way too many images of the "Old" bridge for me to include in the OP. You are welcome to add the ones you like. I will add one more. The one which made me put this article together. The one which suggests that there was way more to this 1209 bridge than we are being told. 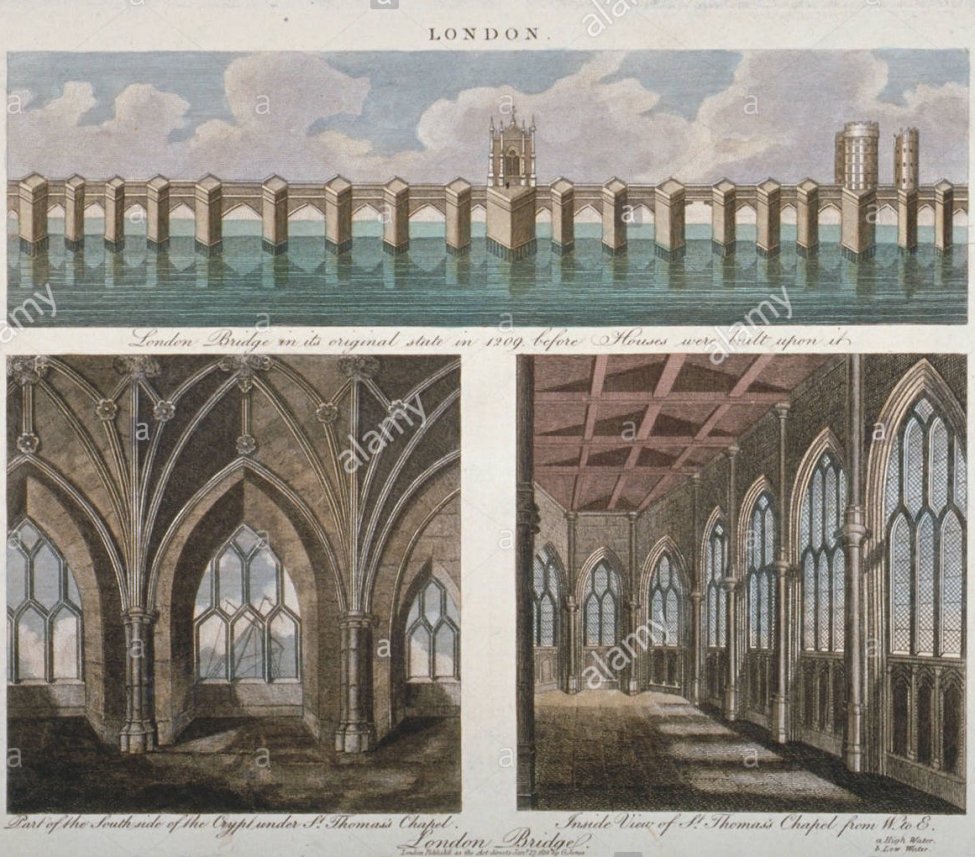 Source​
Sources:
And than, we have the "Old" Bristol Bridge. Of which Wikipedia says: 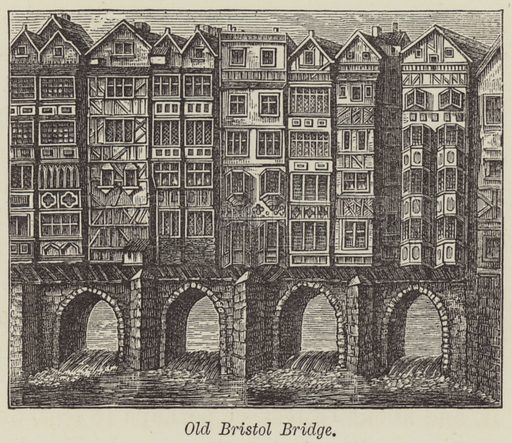 Any opinions on this "Old" bridge? 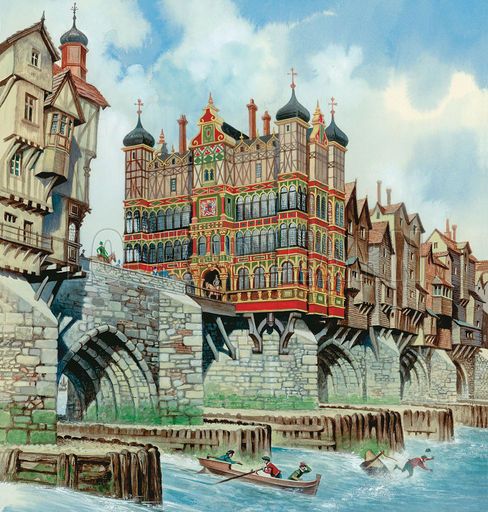 Based on that last photo, it looks like it was an old world power station with the "church" as the power plant. The houses probably were drawing off the excess charge.
You must log in or register to reply here.
Similar articles