Cynocephalus Saint Christopher - what was he in reality?

"According to the legendary account of his life Christopher was initially called Reprobus. He was a Canaanite, 5 cubits (7.5 feet (2.3 m)) tall and with a fearsome face. While serving the king of Canaan, he took it into his head to go and serve "the greatest king there was". He went to the king who was reputed to be the greatest, but one day he saw the king cross himself at the mention of the devil. On thus learning that the king feared the devil, he departed to look for the devil. He came across a band of marauders, one of whom declared himself to be the devil, so Christopher decided to serve him. But when he saw his new master avoid a wayside cross and found out that the devil feared Christ, he left him and enquired from people where to find Christ. He met a hermit who instructed him in the Christian faith. Christopher asked him how he could serve Christ. When the hermit suggested fasting and prayer, Christopher replied that he was unable to perform that service. The hermit then suggested that because of his size and strength Christopher could serve Christ by assisting people to cross a dangerous river, where they were perishing in the attempt. The hermit promised that this service would be pleasing to Christ.

After Christopher had performed this service for some time, a little child asked him to take him across the river. During the crossing, the river became swollen and the child seemed as heavy as lead, so much that Christopher could scarcely carry him and found himself in great difficulty. When he finally reached the other side, he said to the child: "You have put me in the greatest danger. I do not think the whole world could have been as heavy on my shoulders as you were." The child replied: "You had on your shoulders not only the whole world but Him who made it. I am Christ your king, whom you are serving by this work." The child then vanished.

Christopher later visited Lycia and there comforted the Christians who were being martyred. Brought before the local king, he refused to sacrifice to the pagan gods. The king tried to win him by riches and by sending two beautiful women to tempt him. Christopher converted the women to Christianity, as he had already converted thousands in the city. The king ordered him to be killed. Various attempts failed, but finally Christopher was beheaded." - Wiki

St. Stephen and St. Christopher​
KD: Interesting, that wikipedia article and other traditional sources omit, or hide that Saint Christopher, most likely was a Cynocephalus. 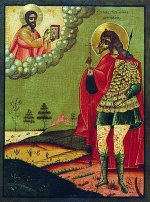 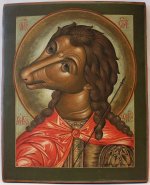 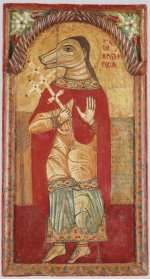 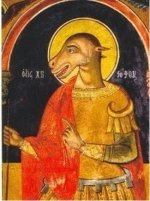 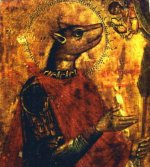 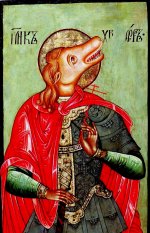 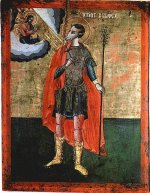 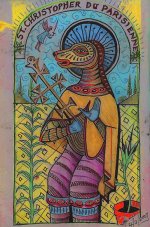 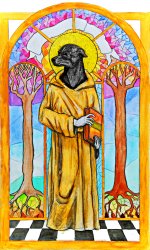 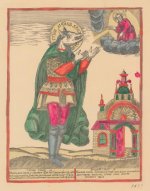 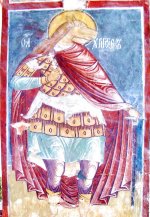 ​
Some food for thought: ...in reference to a possible connection there > Canine - Canaan - Canaanite

- What do you think? Could this individual be something other than a regular human being?
- Do we have any other historical examples of known individuals being Cynocephali?
- Sympathy For the Monster: The Redemption of Reprobus
Click to expand...

I've always thought that these legends came to be due to a misunderstanding. The Europeans (and Arabs, apparently) who traveled to the East came back to Europe with tales about the Han People (Han Chinese - Wikipedia), with facial features very different from those of the Europeans and maybe judged negatively from the point of view of aesthetics. This combined with the name Han, very similar to the Latin "canis", gave rise to the legend, which was probably then attributed to other people as well.
If this is true, then some characters like Saint Cristopher could be Chinese... Who knows!

From the wiki of Saint Cristopher (Saint Christopher - Wikipedia): "he is the patron saint of travelers" (did he came from far away?); "He was a Canaanite, 5 cubits (7.5 feet (2.3 m)) tall and with a fearsome face. While serving the king of Canaan..." (a Han Chinese serving the Khan? Notice the importance given to his face, even in the traditions in which he doesn't have a dog-head); "This Byzantine depiction of St. Christopher as dog-headed possibly resulted from their misinterpretation of the Latin term Cananeus (Canaanite) to read canineus (canine)." (Khan-Canaan-Han People?).

This is "The Annunciation", an oil painting by the Early Netherlandish master Jan van Eyck.

​
On the pavement in the painting are represented biblical scenes. One of those is this below: 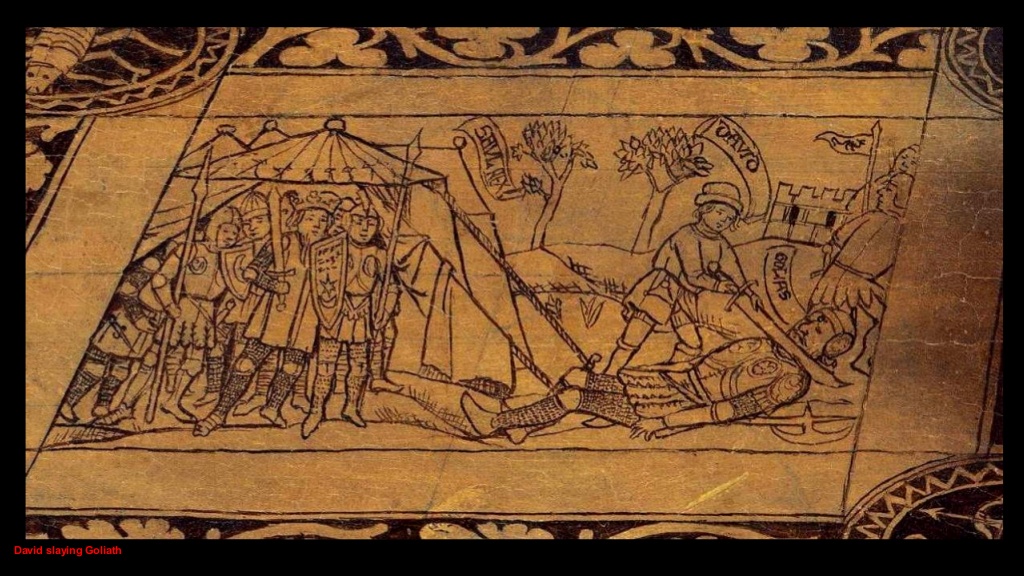 ​
The banner over Goliath's castle represents clearly a dragon or something similar to a dragon. Goliath was a Philistine, but he was neighbour to Israel and therefore the land of Canaan, previously inhabited by Giants. Look also the star and moon on Saul's shield on the left.

My understanding is different. I think these creatures were intelligent but were not created by God. Thus, their flash was corrupted. I elaborated on this here:
Imho, the existence of such creatures resulted in a clear but hard to explain genocide in the Old Testament:
God makes it clear to the Israelites that it is “not because of your righteousness or your integrity that you are going in to take possession of their land; but on account of the wickedness of these nations…” (Deuteronomy 9:5).

I think the genocide we see in the Bible is directly related to corrupted genes. It appears that in the days of Moses things were not as bad as in the days of Noah when:

And the depictions I find particularly interesting are the below ones of Aeneas and Romulus. These are allegedly parodies, and creatures are being called monkeys.

Caricature of the Aeneas group; each of the three characters are represented with an ape body, a dog’s head, human legs, and for two of them (Aeneas and Ascanius) a huge phallus. Aeneas is represented wearing Roman armour and patrician foot-wear. He is carrying on his left shoulder his father Anchises, whose head is veiled and who is himself holding something. Aeneas is also leading by his right hand his young son Ascanius, who is represented as a Phrygian shepherd. 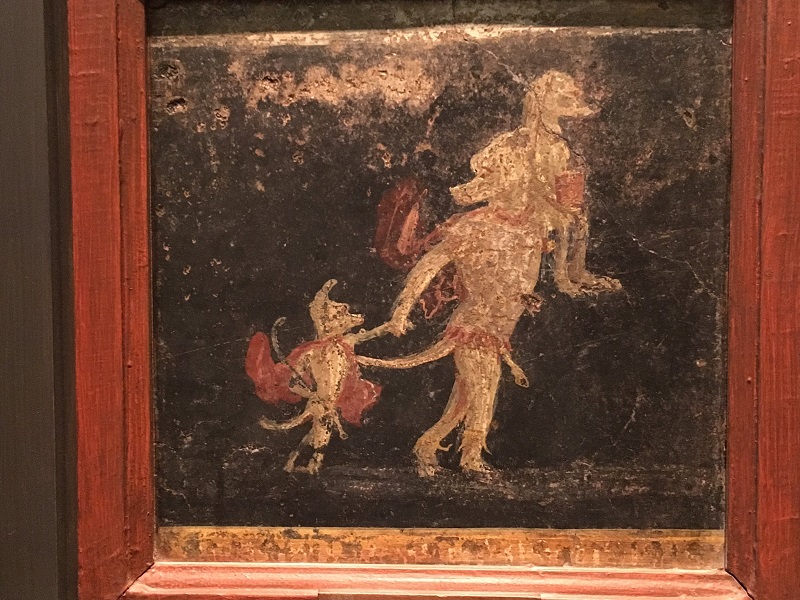 Caricature of Romulus. Due to the damage of the wall painting, the head is erased and we can only guess that the character was holding a trophy on his shoulder (we can see part of a shield and a sword). Visible, however, are his two legs (human ones), his tail, his big penis, and, behind him, the tip of a lance. 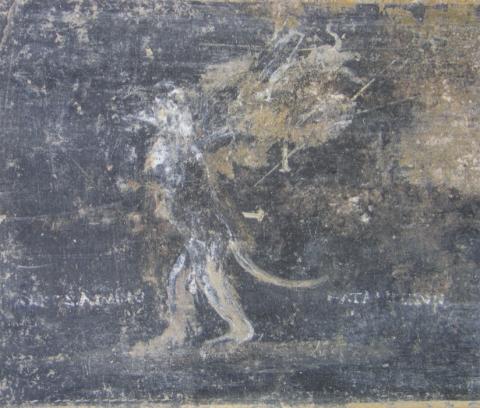