I am not particularly interested in the history of the buildings located on the Washington State campus in Olympia. Well, I have not been up to this point. The construction process of these buildings is pretty well documented, and has plenty of photographs. This is especially true for the Legislative building (below). 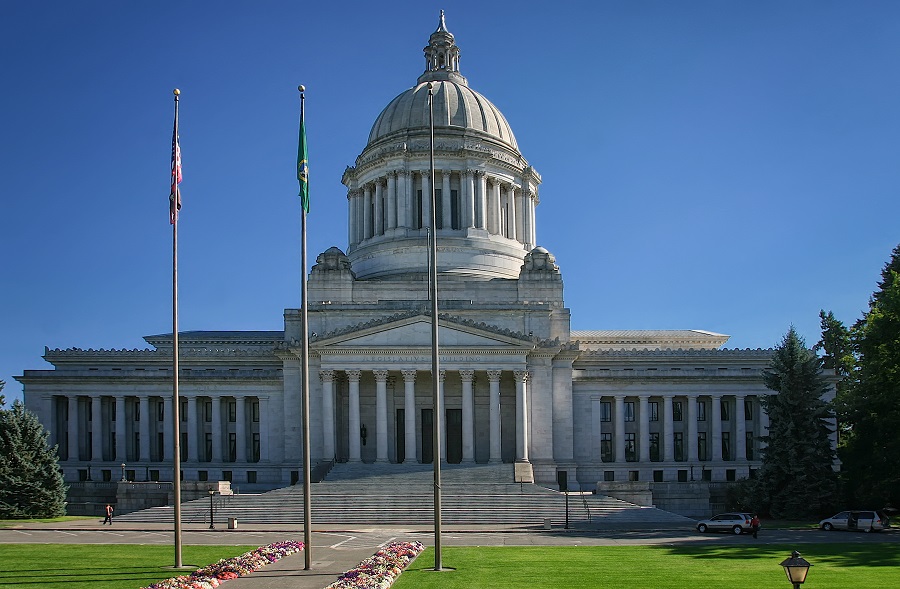 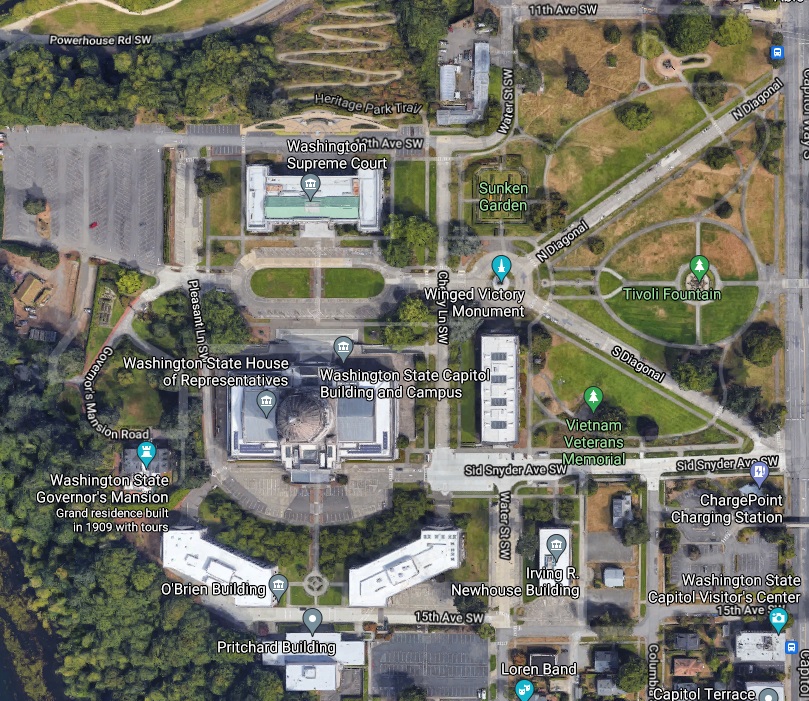 History​
After Olympia became capital city of the Washington Territory in 1853, the city's founder, Edmund Sylvester, gave the legislature 12 acres (4.9 ha) of land upon which to build the capitol, located on a hill overlooking what is now known as Capitol Lake. 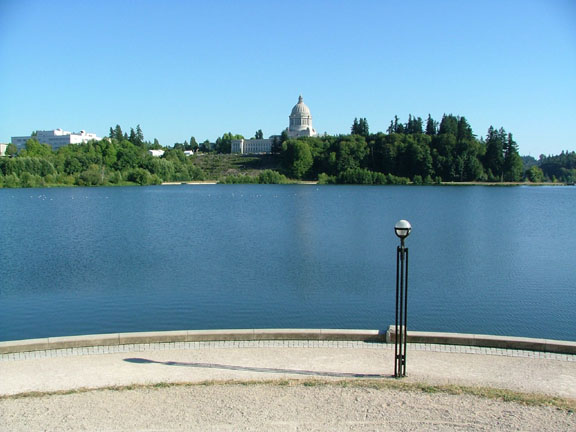 Source
​
A two-story wood-frame building was constructed on the site, where the legislature met starting in 1854. 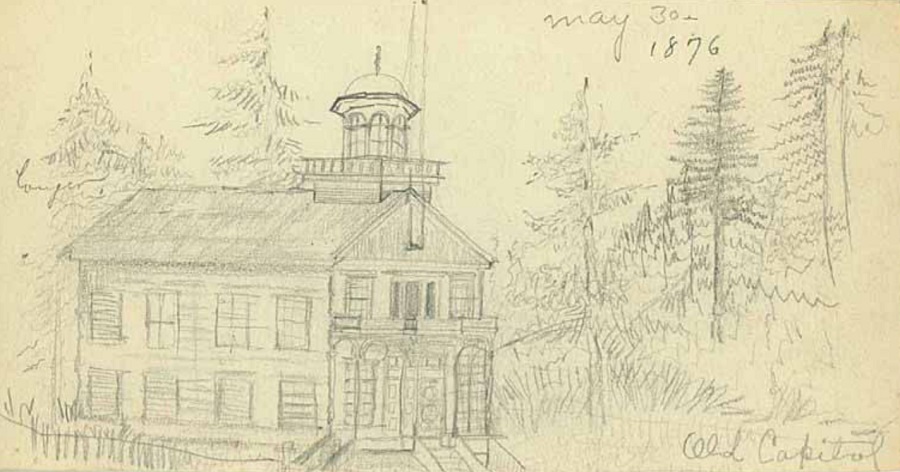 ​
When President Benjamin Harrison approved Washington's state constitution in 1889, he donated 132,000 acres (530 km2) of federal lands to the state with the stipulation that income from the lands was to be used solely for construction of the state capitol.

Earnest Flagg​
Ernest Flagg was a noted American architect in the Beaux-Arts style. He was also an advocate for urban reform and architecture's social responsibility. 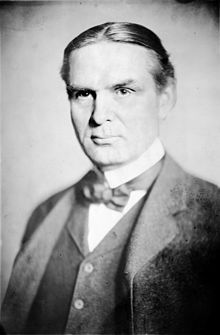 1857-1947​
In 1891, Flagg began his architectural practice in New York, greatly influenced by his knowledge of the French ideas of architectural design, such as structural rationalism.
Back to WA. Construction began on Flagg's plan, but was soon stalled by poor economic conditions with only the foundation completed. When the legislature finally approved an appropriation of additional funds in 1897, newly elected Governor John Rogers vetoed it.
This time, the commission was interested in constructing a group of buildings to serve as the capitol rather than a single facility and selected the design submitted by the company Walter Wilder and Harry White.

The Temple of Justice and the Legislative Building

Source​
The Capitol Campus was placed on the National Register of Historic Districts in 1974 and contains or contributes to some of the most valued views in the State including the Olympic Mountains, Puget Sound, Mt. Rainier, the Capitol Dome and the Capitol Group of buildings on the hill. The design of the Capitol Campus is a grand example of the City Beautiful style of the Progressive era of the early 20th Century.


Walter Wilder and Harry White​
Sounds like Wilder and White were the architect who allegedly designed the WA campus. For starters, these two esteemed gentlemen have no Wikipedia pages dedicated to them. At least I was unable to find any. Here is some info you might find interesting:
I failed to find any photographs of either of the two. Well, I did find one pertaining to Walter Wilder, I guess. 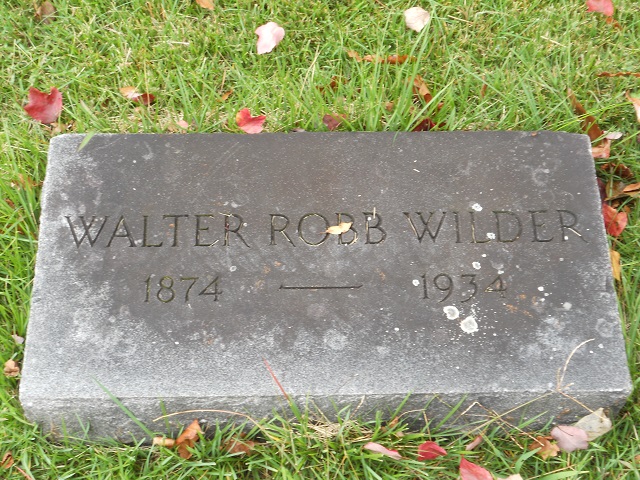 ​
Naturally, this could be rather strange. I am not saying that photographs of these two architects do not exist, but it's rather bizarre not to have those easily available on the internet. After all, structures attributed to them are pretty magnificent. It's not like they died that long ago.

Construction​
Just like I mentioned before, the construction of the main campus buildings has no shortage of photographs. You can follow the below link and see for yourselves.
At the same time, I have this feeling that everything is not as straight forward as it appears to be. Several days ago I had a wonderful opportunity to spend some time in the Legislative Building. 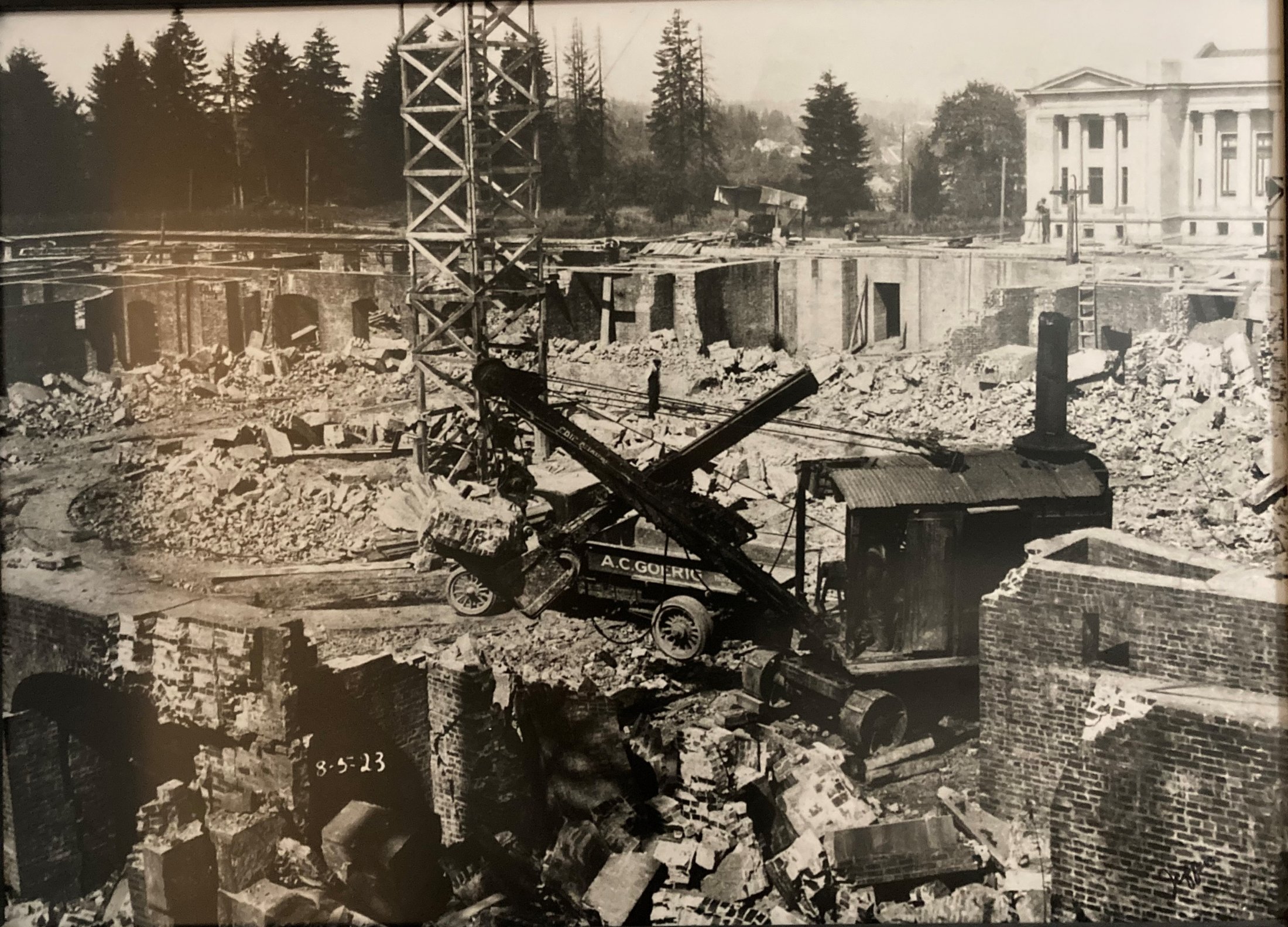 ​
To me, it looks like something much older was being destroyed. Though the below image from the UW Digital Library suggests that we are seeing (above) some early Legislative Building foundation works. 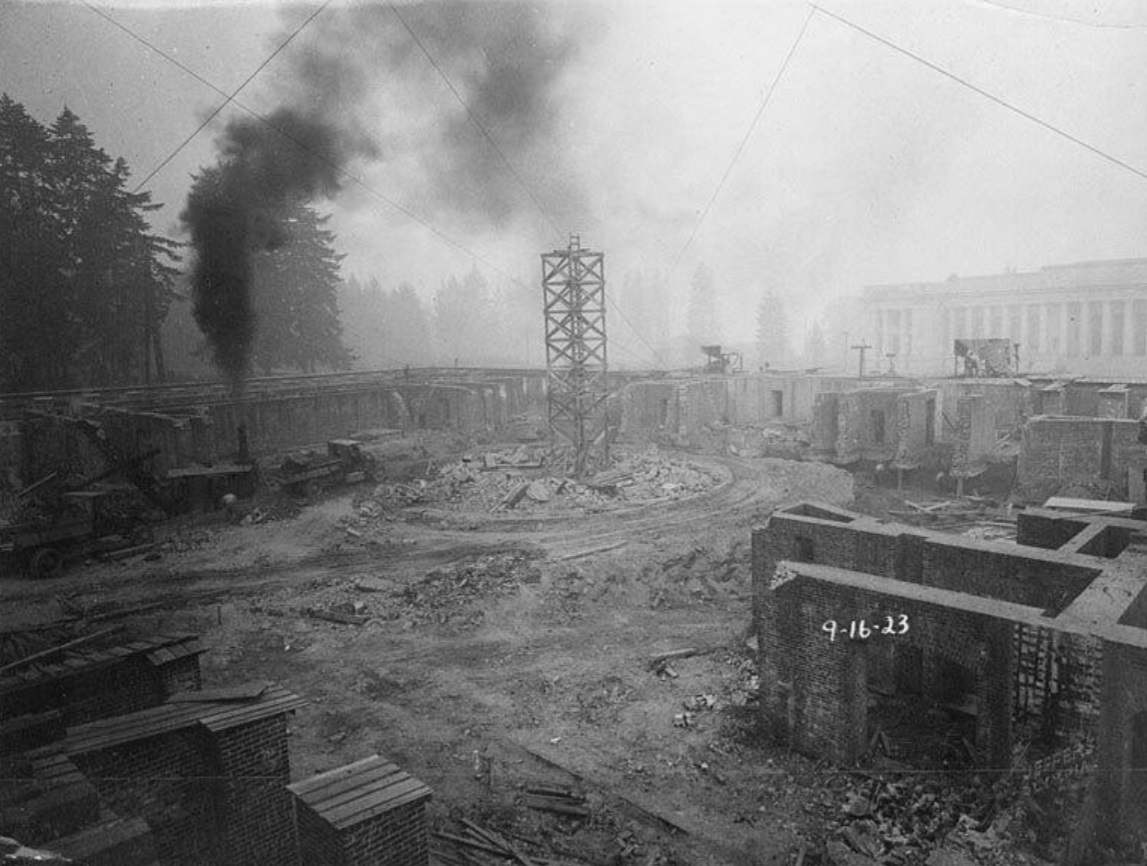 Map
​
The Old Capitol Building is a building in Olympia, Washington. Designed by Willis A. Ritchie, it was built from 1890 to 1892 as the Thurston County Courthouse, and served from 1905 until 1928 as the state capitol, seat of the legislature of Washington; in 1928 the legislature moved to the current Capitol Building. It is now the office of the Superintendent of Public Instruction. 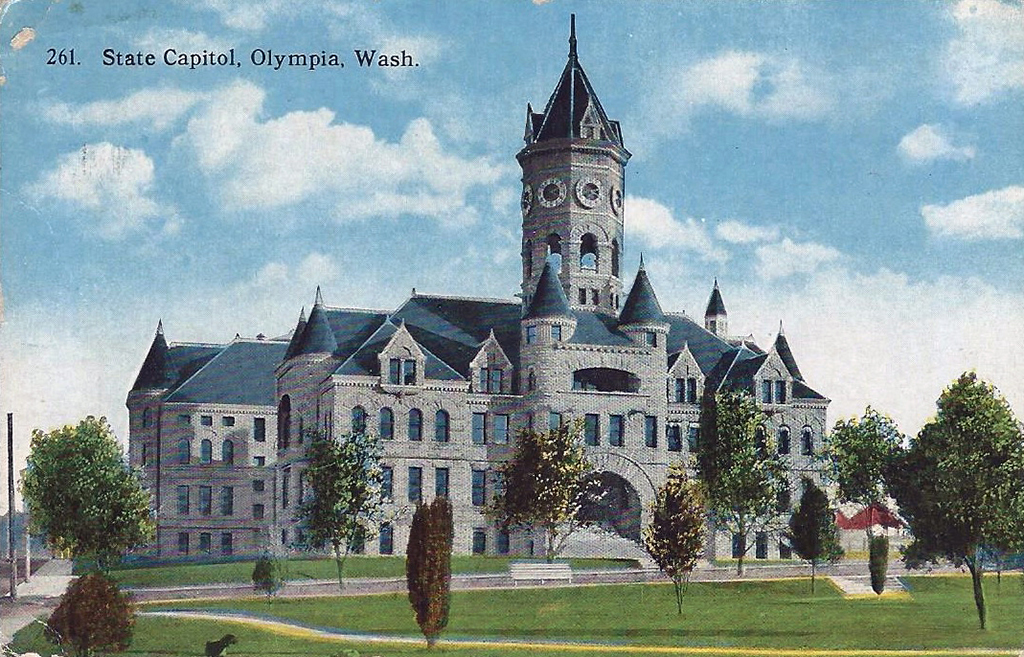 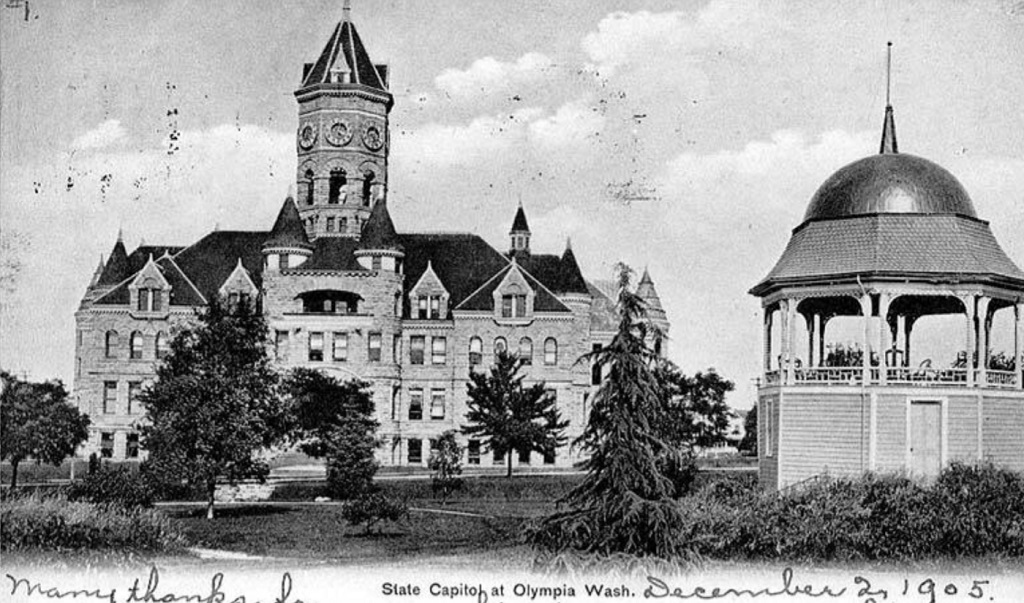 Source
​
The building has survived several disasters, after each of which it has been repaired. A fire in 1928 resulted in the loss of a central tower. 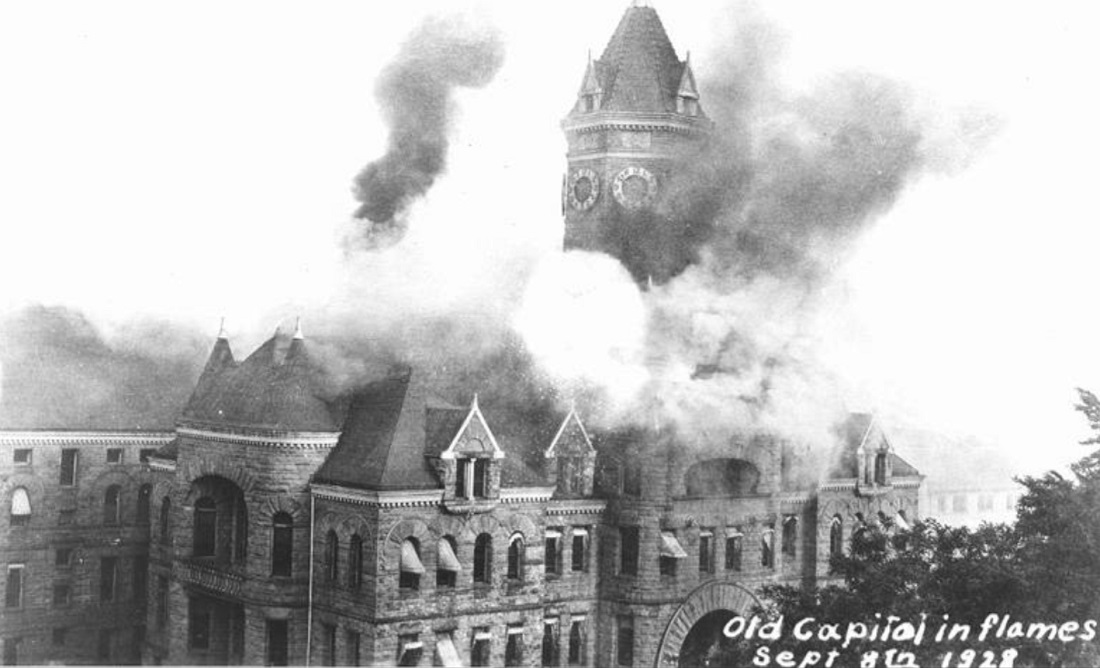 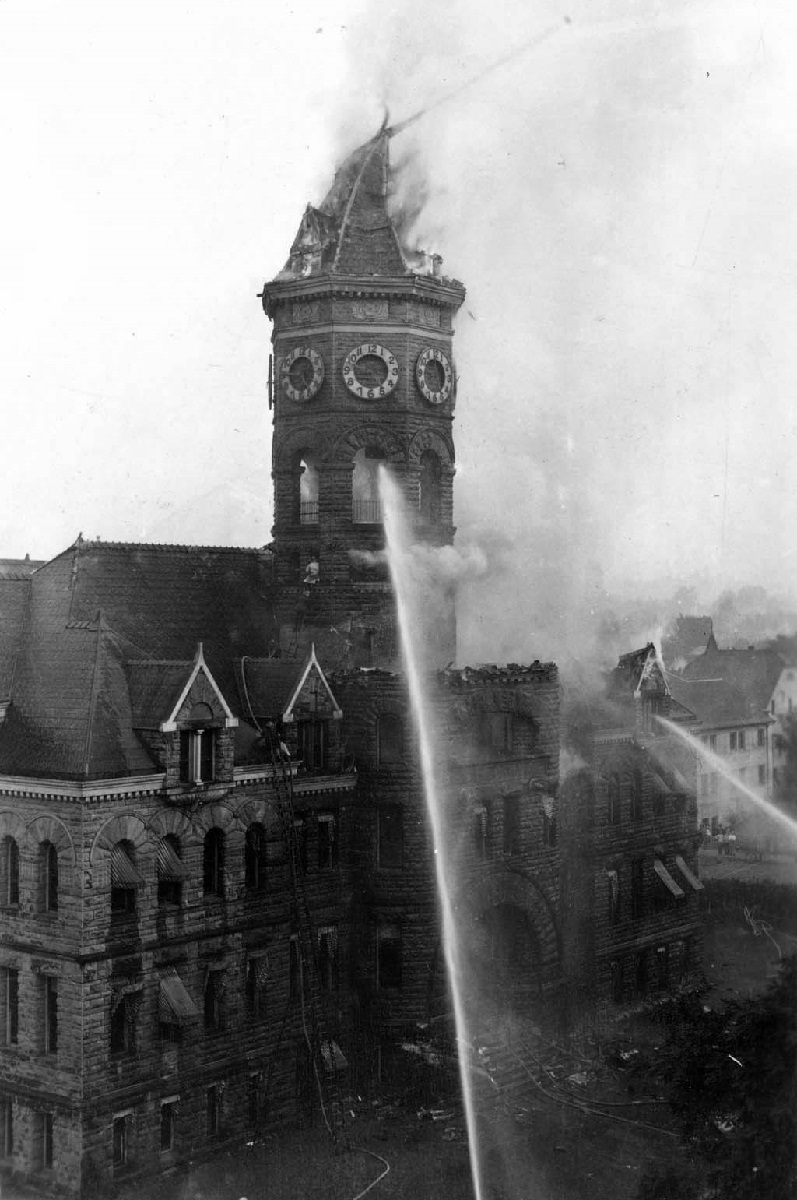 The Fire​
At 3:35 p.m. on Saturday, September 8, 1928, William L. Todd, a 65-year-old janitor, saw dense smoke at the base of the tower and in the eaves of the roof and immediately turned in an alarm, bringing all available firefighters and equipment in Olympia to the scene. The fire started on the third floor in the west wing, the oldest section of building, and climbed into the attic, where it was difficult to reach, and then advanced to the tower.
After 20 minutes, it was apparent to Olympia Fire Department officials that a shortage of men and equipment was hindering their efforts to save the historic building, and they called Tacoma Fire Department for assistance. 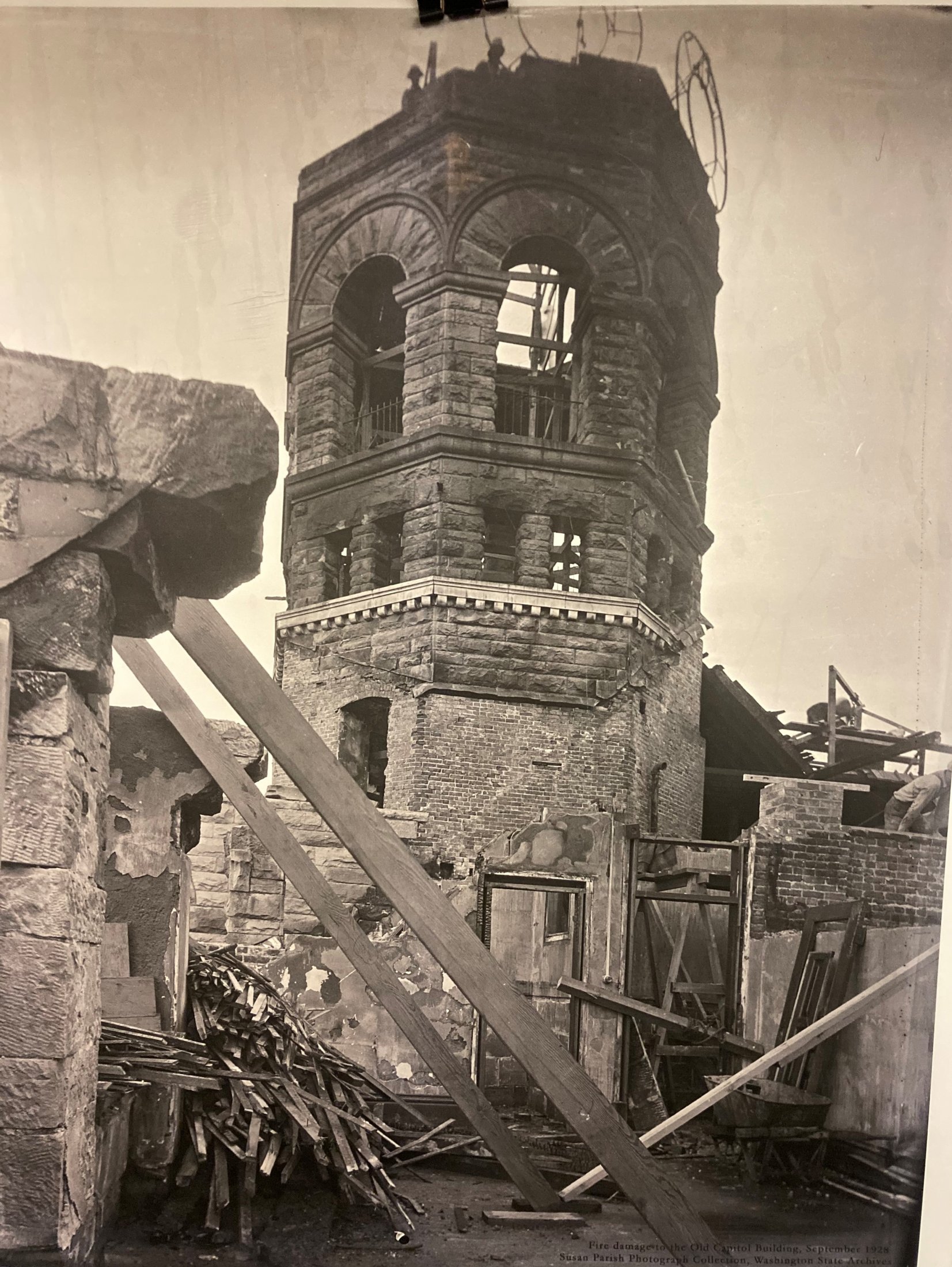 Source​
I am not sure how much of the original Old Capitol building was destroyed by the actual fire. The below image suggests the destruction was not as extensive as the above image suggests. May be some re-building demolition activities contributed to what we can see on the above photograph.

Here is what the narrative says about damages. The clock tower looked like a big chimney, billowing smoke and flames, but the clockwork mechanism continued running. At times, it appeared as though the high tower might collapse, but it stayed upright, and the clocks stopped one at a time. The last clock stopped at 4:47 p.m., when a fire hose hit the dial with a blast of water. By 5:00 p.m., through the combined efforts of both fire departments and citizen volunteers, the blaze was brought under control and by 5:30 p.m. completely extinguished.
Methinks, if this 1928 fire happened prior to 1906, it would have destroyed the entire city of Olympia.

KD: I added the Old Capitol building to this article in order to make the story more complete, if you will. It's the location where the New Capitol building was built that I'm interested in. I will re-post the photograph I snapped at the Capitol. A very similar UW Digital Archives photograph was titled:

What do you think? Were there any pre-existing structures where the new Washington State Capitol building was built?
Click to expand...

The old state capital is very similar to Denny Hall at UW. Offices on two separate floors share the widows. Mezzanine floors seem to have been installed (and the shared widows) because of the large size of the floors relative to wee humans.. The front entrance appears separate from the original in form. Same old story.
Last edited: Apr 25, 2021
A

That looks like legit foundation work. It was common practice, before we really knew how bricks worked, to assemble randomly shaped sections of wall and then try to fit the together. Any gaps were then filled in using pieces from a giant pile of rubble that was kept in the middle.

After a wall was completed, it was usually necessary to pile a bunch of broken brick against it. This was to hold the wall in place until the mortar patches dried.

If this is the case, and it was indeed a brand new construction site, I would like to know why they were building this brand new foundation, while simultaneously destroying parts of it.

​
What happened to the below portion of the allegedly "brand new" foundation? 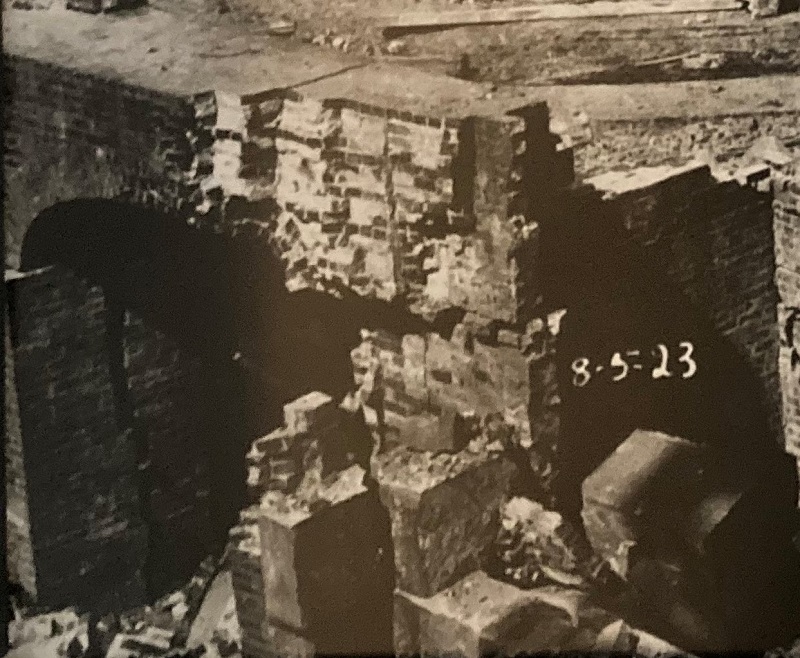 Well. That digger is carrying a newly made, randomly shaped wall piece. A worker will guide it to a different place as this piece it too big to fit on that corner.

I think you missed the sarcasm. In my last post.

I was wondering, perhaps this is off topic, if you observed any shapeshifters while in our dearly beloved capital?

Here is Denny Hall, University of Washington, circa 1900: 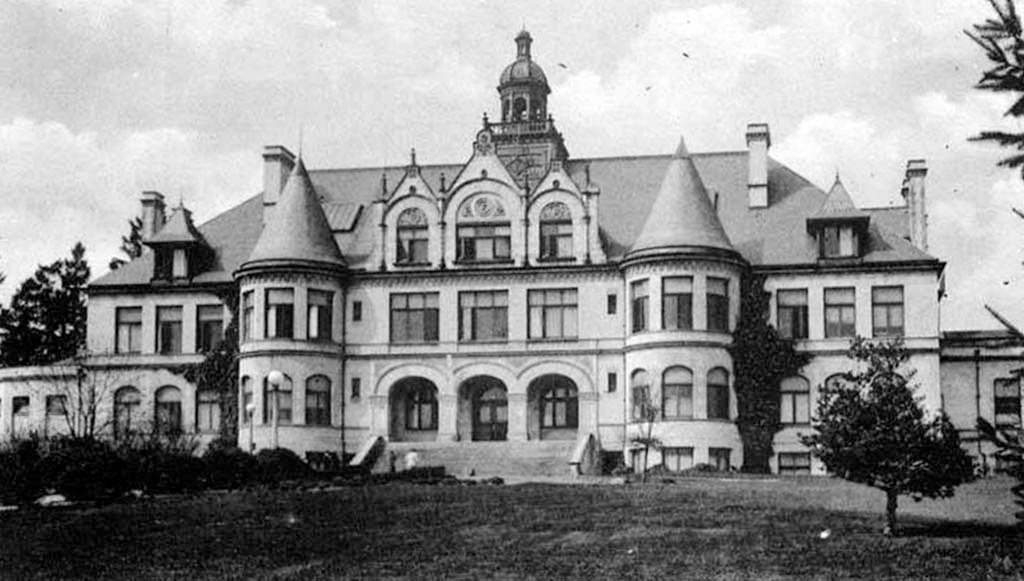 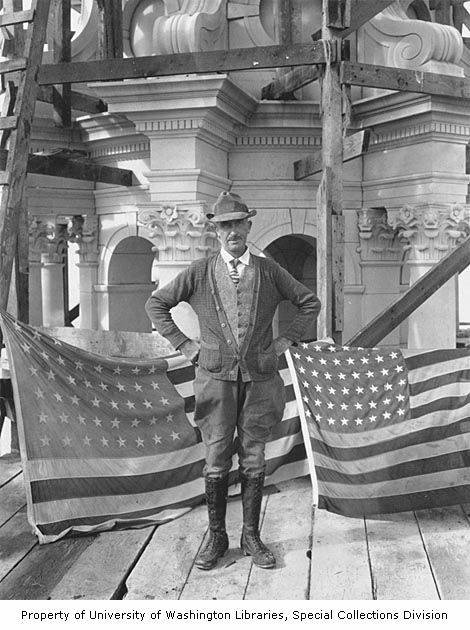 The guy is decked out like a Bavarian-- not like a Scotsman. But OK. He is by definition a mason. So what? Something seems wrong? One obvious question: where did all his assistants go? Did they turn to concrete work? I've never known any stone masons in these parts.

Why the American flags, not Washington? An 1889-forced entry connection? This photo bugs me.

Going impressionistic: The UW archive is full of photos of NWO-type anti-protestors. Few photos of real work being done. Little value given hands on hard work. Everything is a protest or an earthquake. Everything is unstable in the archive. Progress moves away from high marble art. Not long ago the UW alumni magazine was called Columns - yes real columns that can still be found on campus. Not now. Deconstruction rules.
Last edited: Apr 25, 2021
A

Who has 2 US flags at a construction site? And who would display them like that?
X

I'm curious how the clocks work. Because it would appear that they were all in sync near the start of the fire around 3:50. 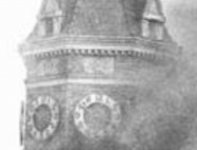 ​
So there was such a raging fire that the clocks almost all worked up until close to when the fire was put out at 5:30? Or at least partially worked to only experience slight, varied slowdowns?

I can't quite decide if it has moved again by the next photo. 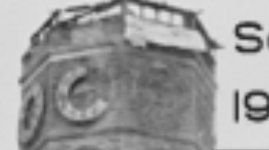 ​
Anyway, I'm not sure if it's anything of note -- just something I noticed.

This is the best research topic ever because the picture evidence is so widespread. The above preexisting structure they dug up is impossible to explain with the mainstream narrative. And this repeats all over north america. You cant have very old structures unearthed beside so called new construction of government buildings.
This link has all the courthouses of the us grouped by state and then by county. Some courthouses show the alleged construction photos, others show a dirty building that is clearly aged but then new white paint slapped on and called new construction. In the late 1800's some of these counties were just being settled by horse and buggy. One would expect logs cabins, then larger wood houses, then small brick houses and then palaces after 100 years or more of settlement. How can grand gothic architecture just appear out of nowhere with average skilled workers. How about underground caverns and basements, I bet every one of these grand buildings has one. What is really crazy is when you share a 30 minute video of tartarian chicago buildings with 10 friends, no one will take the time to view it; people are truly sleepwalking and refusing to wake up. The tartarian truth is a lonely path.
You must log in or register to reply here.
Similar articles