Question | Why Giant Skulls? The Repeal or the Funeral of Miss Americ-Stamp, 1765-66

Within this Family Vault, Lie Interred, it is to be hoped never to rise again, The Star Chamber Court Ship Money Excise Money & all Imposts without Parliament. The Act de Haeritico Comburendo Hearth Mon Gener Warrants And which tended to alienate the Affections of Englishmen to their Country. 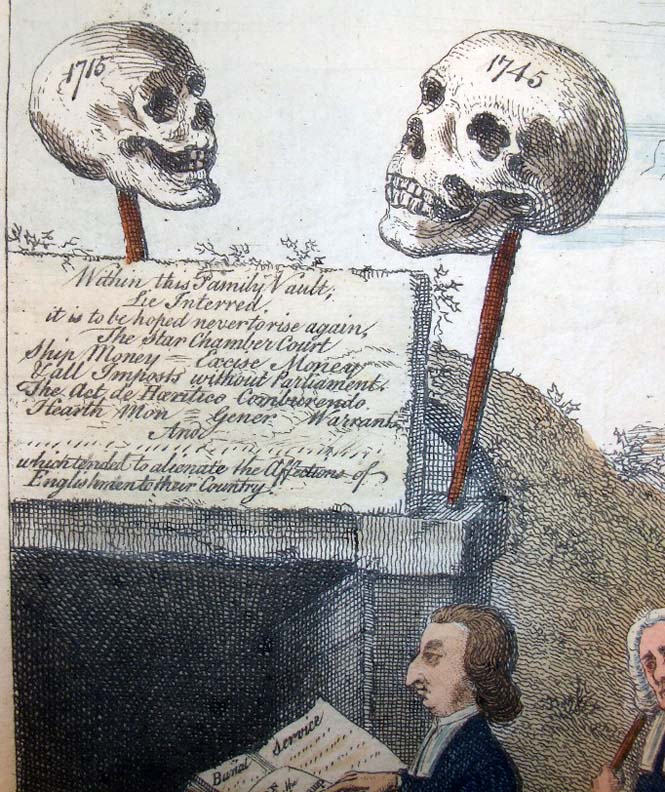 Illustration shows a group of men in a funeral procession on the banks of the Thames River with a row of warehouses in the background, one of which is labeled "The Sheffield and Birmingham Warehouse Goods now ship'd for America." 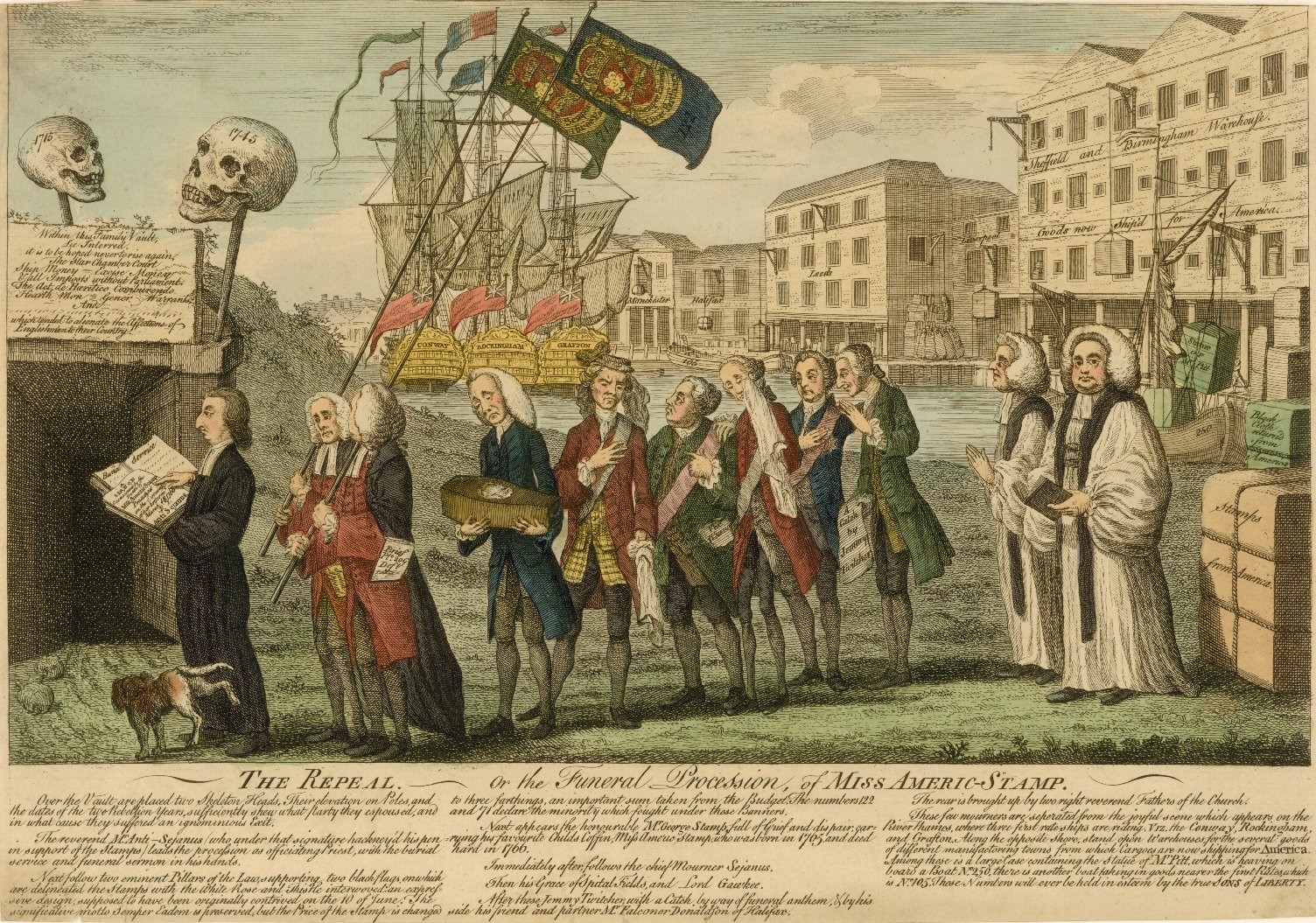 Source
​
The below B&W version looks identical, but there are little tiny differences. 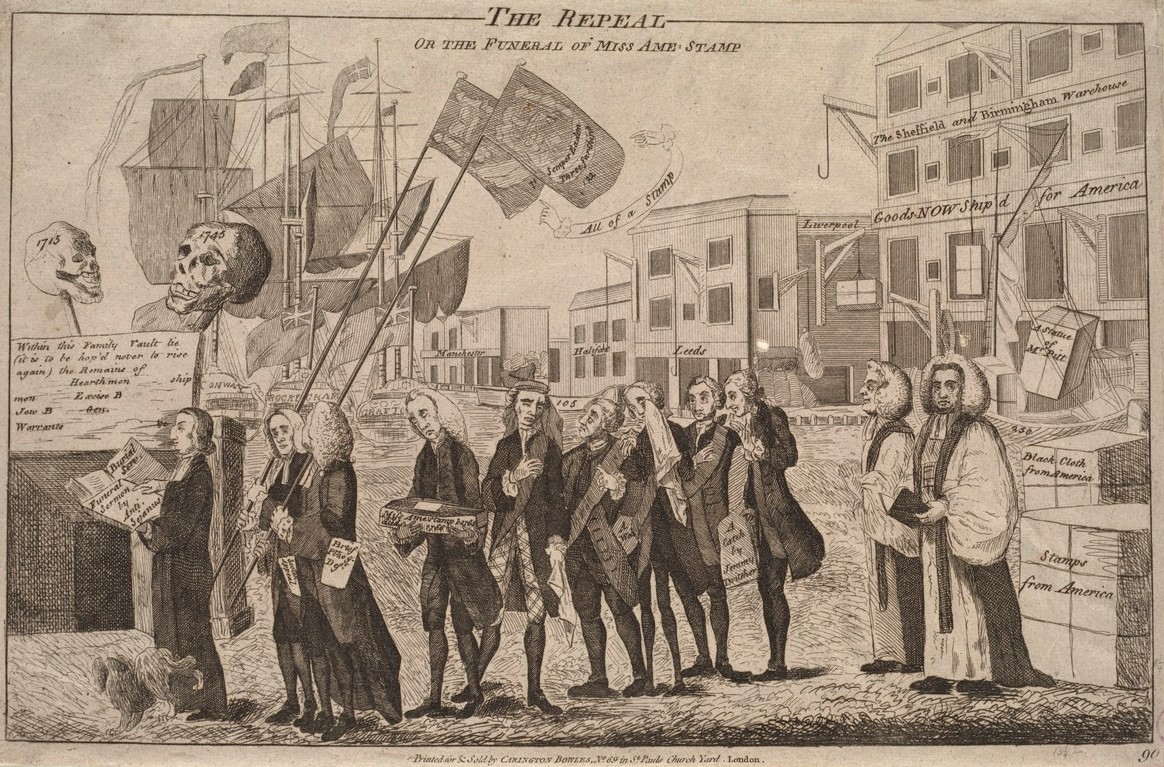 Question: What do these two impaled giant skulls have to do with the Stamp Act of 1765 or this ridiculous funeral procession?
Sort by date Sort by votes 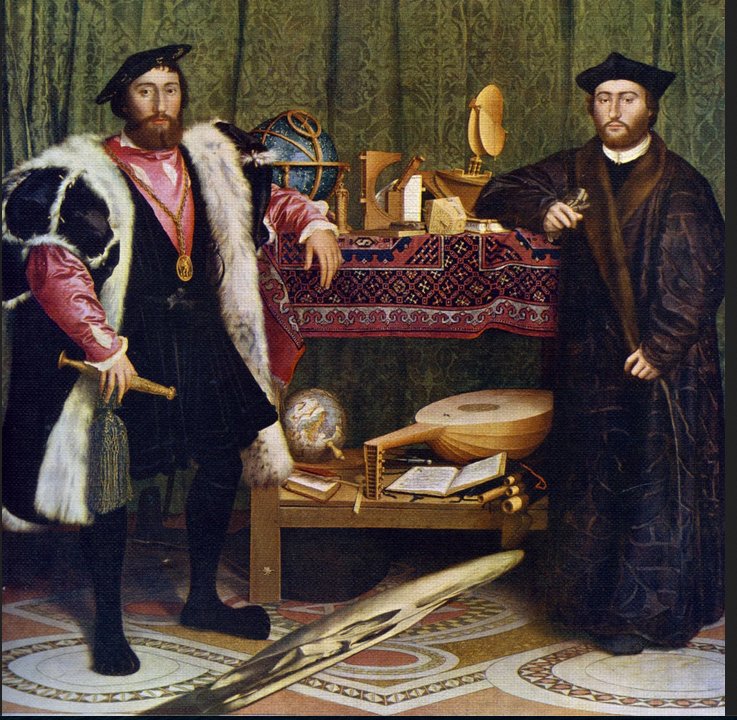 I'm reminded of this 1533 painting:
Age of discovery techniques on display, along with a haunting skull (foreground). Is this the old world they stomped out, hoping to never see it again?
Last edited: Mar 25, 2021
Upvote 1

Wonder what the dates on the skulls allude to. Also, those skulls are massive.
Upvote 0

When we consider the cause, this image is just utterly ridiculous. It’s like a kindergarten procession burying a grasshopper. But those are adults.

Recognition said:
Wonder what the dates on the skulls allude to.
Click to expand...

LOL. Been thinking the same. Even looked up the dates for this:

Wow, I’d never seen this piece, it probably needs its own thread. Here’s info about holbein supposedly created it, and yet, in order to “unfold” the skull, modern day scientists needed computers:

Diagonally across the lower foreground of The Ambassadors there is an elongated form, the significance of which is not immediately obvious. It is a perspective anamorphosis, an intentionally distorted image who’s nature becomes clear when it is viewed from an oblique angle. From a vantage-point to the centre-right of the picture, the form reveals itself to be a skull, probably included as a memento mori.
​
Perspective Painting​
Visual artists developed the techniques of painting in perspective during the early Renaissance, and mathematicians developed projective geometry, which systematizes the principles of perspective. Holbein had a deep appreciation of these principles, but the precise method that he used to produce the anamorphic form is still a matter of debate.

It is approximately life-size, painted in oil on an oak panel, and is close to an exact square in shape. Detailed analysis of the anamorphic form has been done, using a range of complex mathematical transformations. To illustrate the ideas, we will use a computer image processing package (GIMP) to isolate and (un-)distort the anamorphic form.

First, we extract the section of the image in the centre lower foreground:

To reveal the skull we then rotate this image by 25 degrees clockwise:
​ 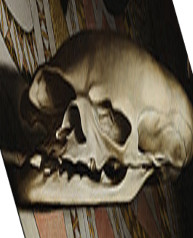 Source​
Finally, we rotate the image counter-clockwise to get the following: 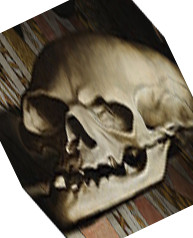 Source​
Now the intention of the artist is clear: an undistorted image of a skull is seen from the correct vantage-point.

The three operations are equivalent to a single stretching transformation about an oblique axis. A more precise analysis leads to the following image:​ 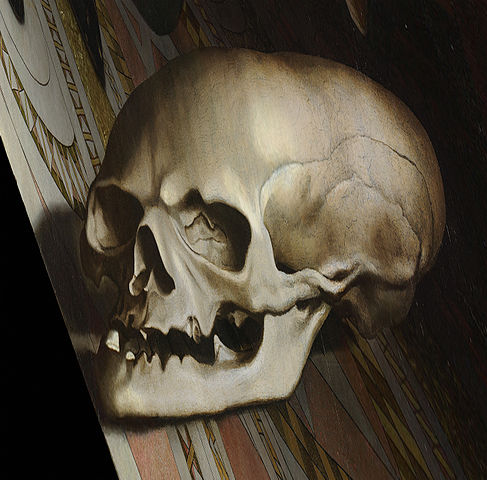 R: Its medium is “Oil and tempura on oak”, which makes me even more suspicious. How could anyone possibly execute computer imaging levels of exactness to create this image, on the irregular grains of the oak surface? Speaking as an artist: I don’t think so.
Last edited: Mar 27, 2021
Upvote 0
S

Recognition said:
Wonder what the dates on the skulls allude to. Also, those skulls are massive.
Click to expand...

The dates refer to the two Jacobite rebellions in Scotland, where certain factions wanted to bring back the Stuart line. I don't know what it has to do with the 1765 stamp act.
Upvote 0

The entire Stolen History operation has allowed me to rethink the academic discourse (albeit itself marginal) about this painting, which emphasizes the "placement of death" in the midst of egotistical portraiture. While I still think it is interesting and revealing so far as it goes, we have so much evidence for giants being systemically eliminated from consideration of the past.

By the way, I ran into a Blackfoot, who told me his ancestors told many stories about giants who hid out in the mountains of Northern, Montana - late 19th century. The Blackfeet thought them cannibals and sinister.
Last edited: Mar 26, 2021
Upvote 0

Sofia said:
The dates refer to the two Jacobite rebellions in Scotland, where certain factions wanted to bring back the Stuart line. I don't know what it has to do with the 1765 stamp act.
Click to expand...

Tried to find anything (paintings, woodcuts, texts) giant related within these Jacobite rebellions, but with no luck. At the same time, as long as "Their Highnesses" were involved, things are not exactly hopeless, imho.

Flags also have numbers on them. 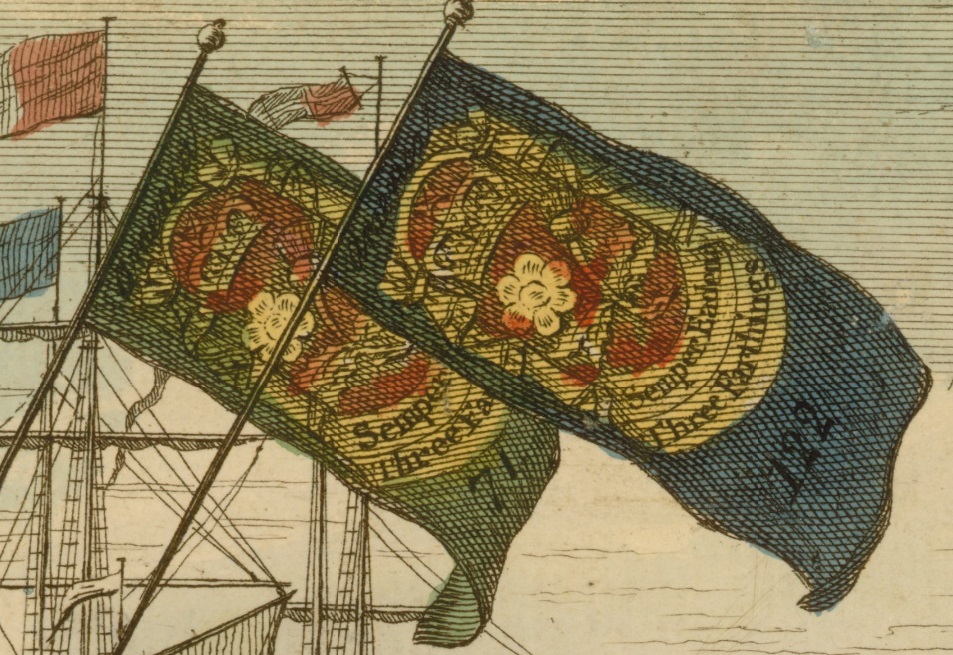 The Repeal, or The Funeral Procession of Miss Americ-Stamp - Graphic Arts
Quote: Next follow two eminent Pillars of the Law, supporting two black flags, on which are delineated the Stamps with the White Rose and Thistle interwoved, an expressive design, supposed to have been originally contrived on the 10 of June. The significative motto Semper Eadem is preserved, but the Price of the Stamp is changed to three farthings, an important sum taken from the Budget. The numbers 122 and 71 declare the minority which fought under these Banners.

The thistle and the white rose (Rosa alba) represented the Jacobites. Perhaps the size of the skulls represeneted the size of the threat to the British "establishment" PTB.

I wondered what the Jacobite cause had to do with the Stamp Act. The link I found is William Augustis, Duke of Cumberland, who was the uncle of George III of Britian.

The Duke of Cumberand was despatched to deal with the 1745 Jacobite Rebellion and this culminated in the great defeat at the battle of Culloden in 1746. The aftermath of Culloden was basically a purge of anything Jacobite. This included the wearing of plaids, the speaking of Gaelic, and carrying of arms by the Highlanders and sympathizers. Many people were forced from their homes and whole tracts of land were cleared. These were The Clearances”, and many people emigrated to the United States. However, the extirpation of the Gaelic language and cultural traditions of the north began during the reign of James VI, as well as the introduction of Protestant ministers.

Cumberland’s other claim to fame was the creation of the first “Rockingham Ministry” of 1765, with repealed the Stamp Act.

Throughout the Stuart dynasty of four kings (James I, Charles I, Charles II and James II) we had the rise of power of Parliament and the creation of the central bank, Bank of England in 1694.
The English Civil War started during the reign of Charles I and eventually led to his execution by beheading. OLiver Cromwell, who led the war, is said to have been financed by banking interests in Amsterdam.
After the war, when Charles II became king, he granted "the East India Company the rights to autonomous government of its territorial acquisitions, to mint money, to command fortresses and troops, to form alliances, to make war and peace, and to exercise both civil and criminal jurisdiction over its possessions in the Indies"

A great deal of machinations were going on and it seems all the Stuart kings were opposed to the creation of a central bank. Finally, James II, the last ruling Stuart king, was deposed, to make way for William of Orange, from Holland (who was married t one of the daughters of James II.

It's such a large subject.. I don't think they were of remarkable physical size, but the Jacobite threat to the emerging "Establishment" was an issue that had to be vanquished.
Upvote 0

Who knows, may be this hat was a great fit for the OP skulls. 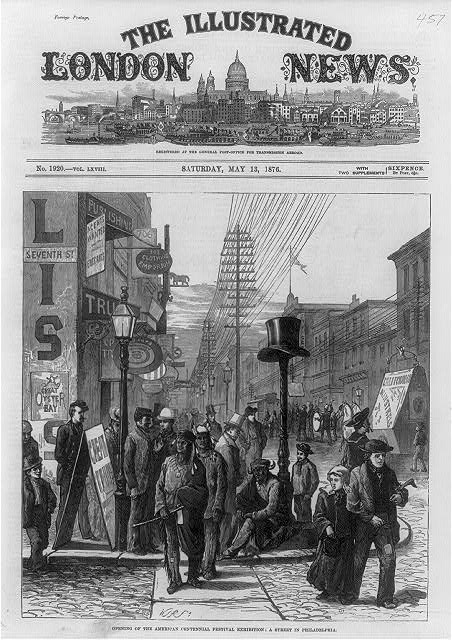 Source
Upvote 0
You must log in or register to reply here.
Similar articles